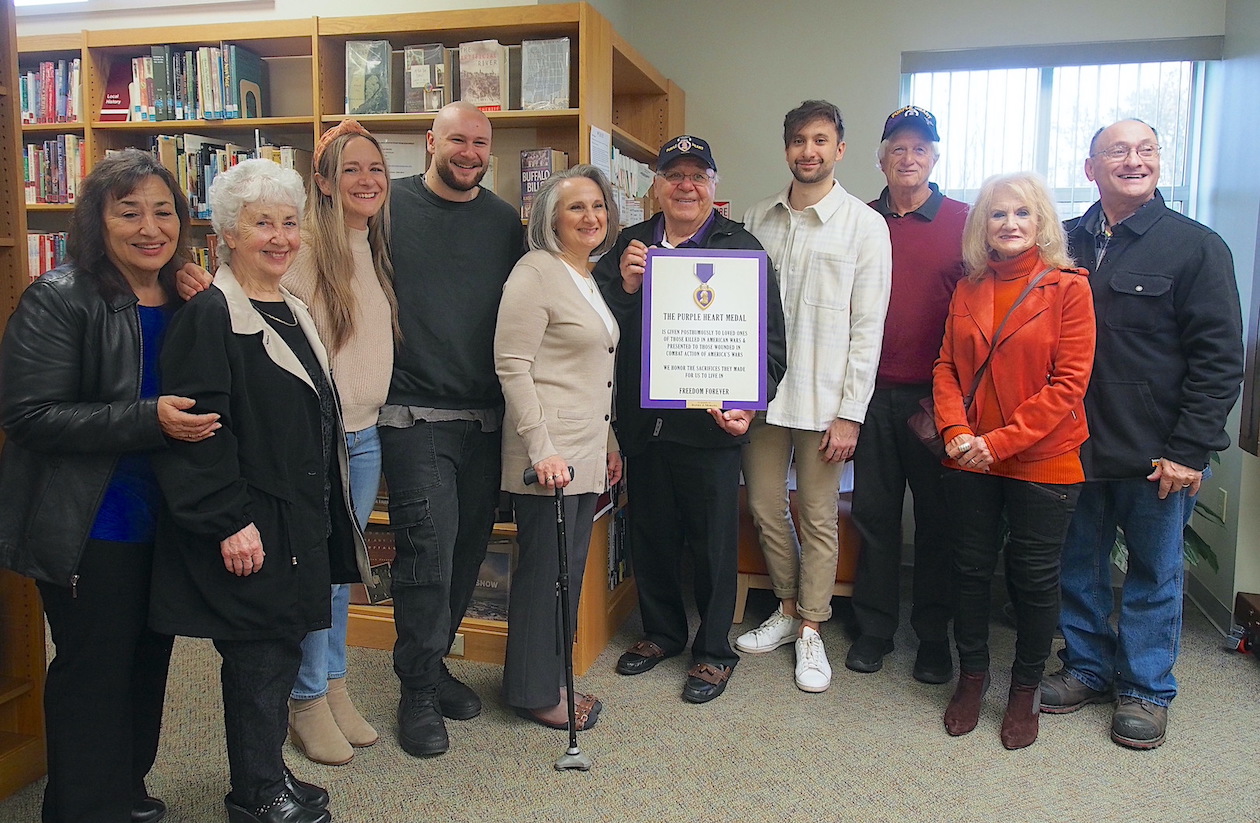 Ron Krul, of the Niagara Falls chapter of the Military Order of the Purple Heart, presents Morano's widow, Celeste, with a plaque honoring Morano's sacrifices, as family and friends look on.

Daniel Morano’s family said service to others was a big part of his life, both in the military and in his civilian life.

According to Krul, the plaques represent a “legacy and awareness campaign” being run by the Military Order of the Purple Heart.

Before he died on Nov. 18, 2019, of a traumatic brain injury caused by a fall from a ladder, he had been chaplain of that organization. He visited veterans in hospitals and at other areas in the community, recalled two of his children: John Morano and Lindsay Friedman.

Krul explained, “We are presenting plaques to towns, individuals and individuals’ families. In the past year, we’ve presented 32 of them to different cities, towns and individuals. We are attempting to raise the awareness of the sacrifices that families make when someone puts on a military uniform. It’s not just the veteran who makes the sacrifice. The whole family makes sacrifices when somebody’s wearing the uniform.”

He noted Morano was a member of the Niagara Falls chapter.

Krul, who is also a Vietnam veteran, said, “The Military Order of the Purple Heart is an organization that’s open only to those who had been wounded in action or who have made the ultimate sacrifice in combat.”

Morano, who was a U.S. Army veteran, was drafted in 1967 after he finished high school, Celeste said. She said her husband, whom she married in 1988, was wounded in 1968, and was awarded the Purple Heart, as well as the Bronze Star and the Silver Star. 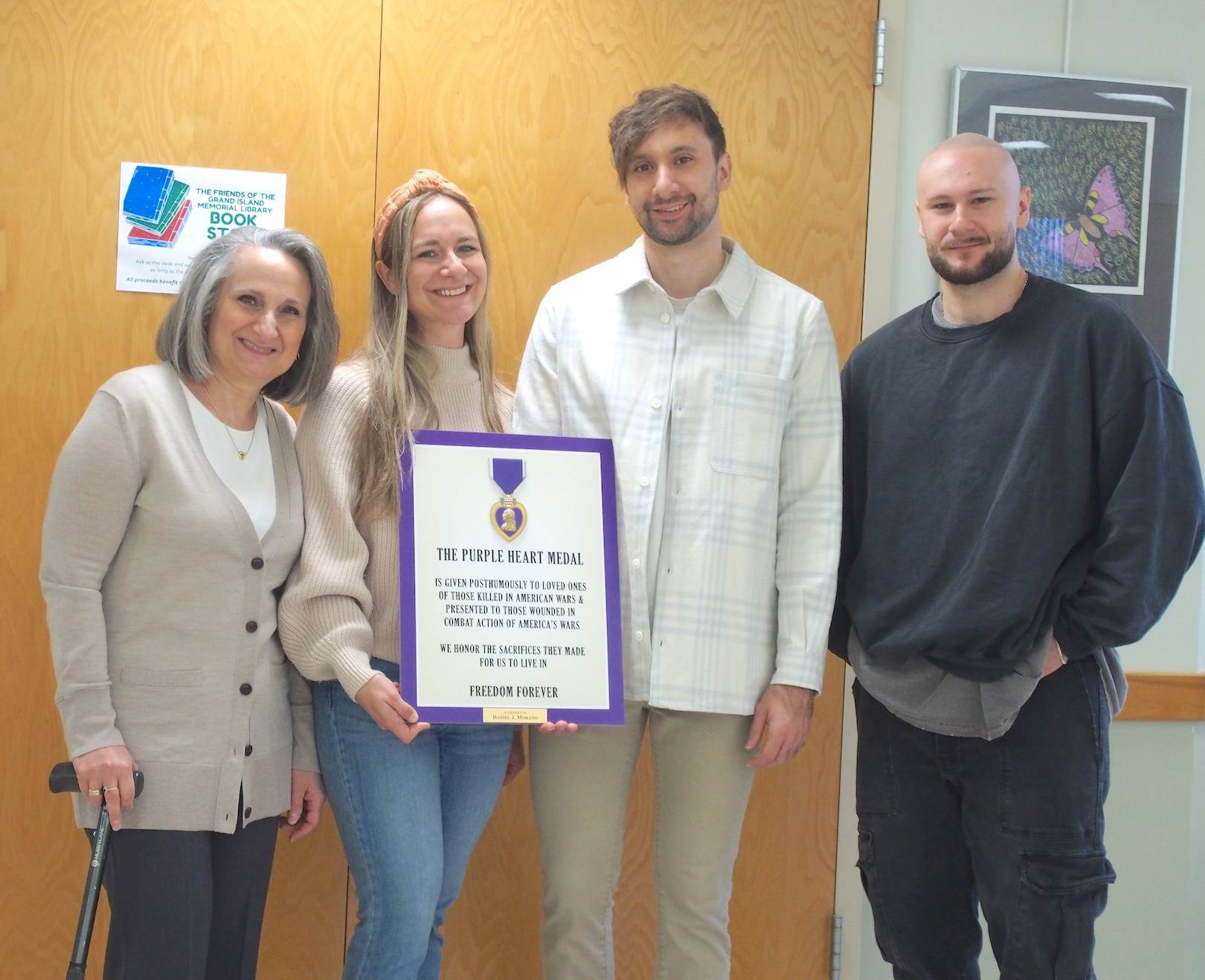 Dan Morano’s family shows off the plaque given to them by the Military Order of the Purple Heart. From left: Celeste Morano, Lindsay Friedman, John Morano and Zach Morano.

Being a veteran was also a challenge, Celeste said. At times, Dan struggled with his memories of the war.

“We shared at different times, and I was there for him in supporting of difficulties that he might have had with his injuries,” she said. “We were a team in our marriage, so it was a very strong marriage. There were definitely times in the middle of the night when he would have the nightmares that people deal with and flashbacks and things like that. That didn’t seem to change his attitude toward just serving other people and showing his love for others. His life was just an example of giving.”

Celeste said her husband was happy to be with family and friends and to be able to show support to them. He was happy with whatever he could offer them, including “sitting with someone during surgery or picking people up and taking them for appointments. If people had a need and he was available, he was always there for them. He was a great confidant, almost like a personal counselor to some people. He was wonderful at giving and was a good listener.”

Celeste said family was important to her husband: “We have three children. Our oldest is John. Our middle one is Lindsay, and our youngest is Zachary. Daniel was a great example to them: a father and a friend who was always there.”

John Morano remembered his father as “a natural giver. He always put his friends and family first. So, for some of the people who came today, my dad had an impact on their life because of how giving he was and how loyal he was to their friendship. Most people would know my dad by his generosity and his willingness to always help people out.”

Zach Morano said, “I guess one of the best things about him was his love for people, kind of similar to what my brother John said. But also, I feel like he was the kind of person who, if you met him and talked to him for five minutes, you would remember that conversation for the rest of your life. He had that kind of impact on people. He was always trying to talk to people and learn more about them and be loving and friendly toward everyone he knew. If he was talking to you for a bit, he would even give you advice on things. He was the kind of person who would have a life-changing conversation for only about 10 minutes. He was always finding the best in people.”

Lindsay Friedman said her father gave to others through his sense of humor.

“I would say that my dad’s sense of humor is not only what us kids and obviously our mom loved so much, but also his friends and family,” she said. “He was always known to be the star of the show. He would light up a room as soon as he walked in. He’d always have something to say to everybody. He had nicknames for people, and everyone just genuinely loved his sense of humor and his banter. He was always the life of a party.”

Another memorable thing about Dan Morano was through the way he dressed, his children related.

Zach said, “I loved my dad’s fashion sense. He had the most unique, interesting fashion sense. The best way to describe it is mixing military surplus clothes with like. …”

“Work wear,” Zach commented. “It was something else. I still go to military surplus stores all the time. That’s where we shopped when I was a kid.