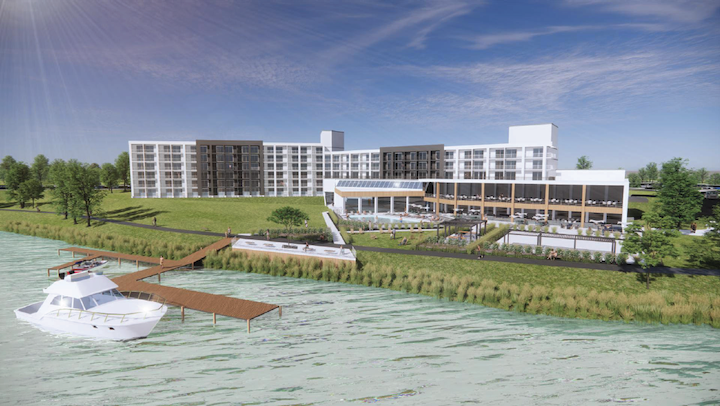 Grand Island Planning Board to review

Progress continues toward residential living at the Radisson Hotel -- Niagara Falls -- Grand Island property at Whitehaven and East River roads. A number of procedural steps were taken at last month’s Grand Island Town Board meeting, and further action is expected at November’s Planning Board meeting.

These actions follow release of an updated site plan submitted to the town in mid-September by developers Michael J. Conroe, AIA LEED AP, of Orchard Park’s ELEV8 Architecture, and Justin B. Earl of JB Earl Co. of Salt Lake City. The plan calls a host of changes on the 10-acre-plus property, including public access for residents from the historic ferry landing site area on the southwest, to the River Oaks Marina property on the northeast. Proposed features include construction of a riverside kayak launch with dedicated parking for residents nearby; improvements to the existing docks; a dog park; the addition of a pavilion fronting the patio area, as well as placement of picnic tables and benches throughout the public shore area. In addition, there could be two levels of outdoor seating fronting the restaurant, removal of the existing tennis courts on the northern end and conversion to pickleball courts. The indoor and outdoor pool areas would remain in use.

“These plans show a nearly 2-acre public easement and introduction of a waterfront park for the town residents as part of our incentive zoning contribution,” Conroe said.

The updates also show a reconfiguration of the hotel’s 263 rooms into six stories of rental units in one wing, and four stories of monthly and short-term nightly rental units spread out above the hotel’s restaurant, fronting the pool area, patio and front lawn.

Currently, the plan awaits further review and possible changes by the Planning Board.

At the Town Board’s Oct. 3 session, the council reviewed State Environmental Quality Review (SEQRA) documents, offering a negative declaration and approval of Planned Unit Development status for the project. In a 4-0 approval of the PDD, the board deemed the project to be consistent with the town’s comprehensive plan. Areas of consistency included:

•The development of a publicly accessible walkway and parkland, providing greater access to the Niagara River waterfront;

•The PUD being compatible with existing development in the surrounding area, and not unduly burdening existing town infrastructure or services;

•The current hotel property having sufficient water, sewer, stormwater, electric, telephone, highway access, parking and loading for the proposed uses. In addition, internal parking and roads were determined to be adequate for the anticipated uses for the PDD. The property provides adequate access for firefighting equipment, police and other emergency vehicles.

In reviewing the concept plan, the Town Board considered “the factors set forth in Section 407-121(a) of the Town Zoning Code, including the proposed residential uses and their locations, density, location of vehicular and pedestrian traffic, location and extent of utility systems and public and private open space.”

“The proposed density is consistent with the expressed desire for higher-density residential development for this area in the comprehensive plan,” the board said. “The concept plan is hereby approved as consistent with the health, safety, morals and the general welfare of the community.”

“We aren’t looking to expand the footprint,” Conroe said of the latest proposals. “Everything we do will be within the … existing footprint.”

He said a final price tag for the project is still in the works.

In a recent Dispatch interview, Supervisor John Whitney called the latest proposals “a tremendous improvement” for the Whitehaven-East River neighborhood.

The Grand Island Planning Board is scheduled to meet on the Radisson issue on Thursday, Nov. 7, at Town Hall. The session is open to the public.