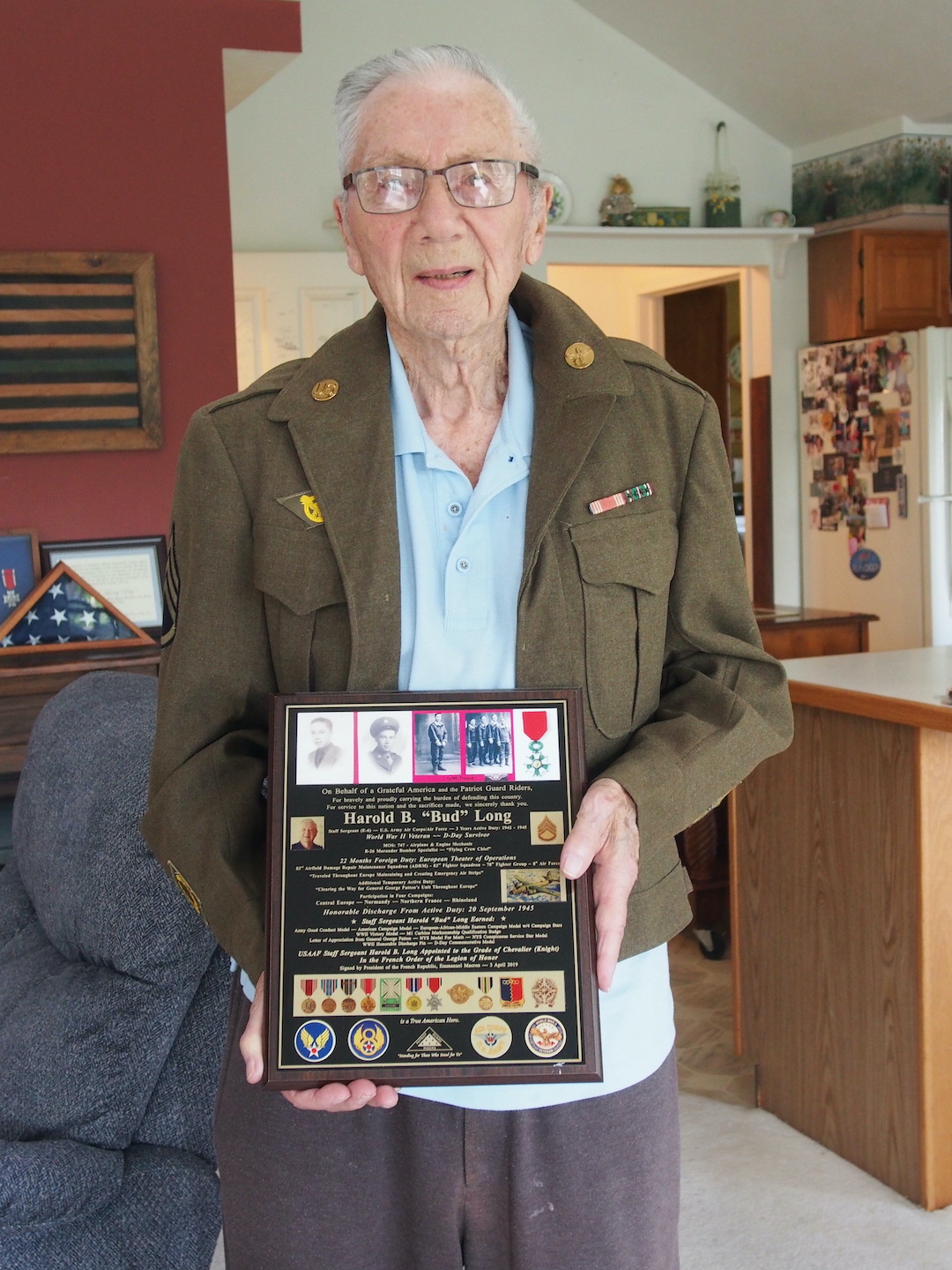 Bud Long shows one of the plaques describing his military service during World War II.

Bud Long was born in Tonawanda and spent most of his childhood and youth living on a five-acre farm on Grand Island. When he graduated from Tonawanda High School, his father asked him if he was going to work on the family farm, but he had other ideas.

“No way!” Long recalled telling his father. “You work seven days a week, from seven o’clock in the morning until nine o’clock at night. I’m not going to do that.”

With Europe heading to war, there were opportunities for employment within defense-related companies. One of those companies, the Curtiss-Wright Corporation, was, in the 1930s, headquartered in Buffalo. It was the country’s largest aviation firm and built more than 142,000 aircraft for the U.S. military during World War II, according to Wikipedia.

Long answered an ad from Curtiss-Wright in the Sunday newspaper in 1939. He said that he started his employment there on an assembly line, installing rivets. The work didn’t interest him, so he asked his foreman to find him something different to do. Because he had skills in reading blueprints, he was assigned to do salvage work, which involved repairs and servicing things that didn’t work, such as a windshield that didn’t fit. By January 1942, Long was transferred to a new plant in Columbus, Ohio. “They said that they were starting a new plant there, and they wanted to find guys who had experience to help set it up and get it started. I signed up for it. Everything was paid for. We stayed in a hotel. All your meals were paid for. Eat anyplace you want. The hotel was paid for. Laundry was taken care of. You rode a cab from downtown to the airport. Cab fare was all paid for. I was only 20 years old.

“Finally, they had three shifts, so we had to go on 12-hour day shifts, seven days a week. All you did was eat and sleep. Eat and sleep. You couldn’t do nothing. I had been going with Lucille for two or three years. I told my foreman, ‘I’m going home. We’re going to get married next week.’”

Long left on a Friday, got married on Sunday, and returned the next day with his wife. “They paid for all her meals, her lodging, her hotel, and everything. I was still working there but I finally said to them, ‘I’m going back to Buffalo. I want to work a regular shift and then go home.’

“The foreman told me, ‘You go there, and you’re going to be drafted.’

“I said that I would take my chances.”

Three months later, Long was drafted. Because he had been working on airplanes, which involved electrical and mechanical work, he passed a test and was placed in the Army Air Forces. He was sent to the St. Petersburg Training Center, a basic training center, and he stayed in the Vinoy Renaissance Resort on Tampa Bay. During World War II, the Army leased hotels, apartment buildings and other structures to house and train soldiers.

“We used the golf course for drills. It was dusty and all chewed up. You never wanted to be in the center of the column. You always wanted to be on the outside. You couldn’t breathe; it was so dusty in the center. After 20 or 30 minutes, they said, ‘OK, break! Take a smoke. Ten-minute break.’ I was supposed to be there for 13 weeks of basic training. Luckily, they must have needed mechanics because, within two weeks, they sent me to Gulfport, Mississippi, to aviation mechanics school. It was just outside of Biloxi. There were tarpaper barracks on stilts because they flooded every other day. The barracks were 4 feet off the ground. I’d be in a class from eleven o’clock at night until seven in the morning. You try to stay at work at four or five in the morning doing hydraulics, electrical and all that. I made it through and graduated in March or April of 1943.

“Then I went to B-26 school in Maryland. The plane was called the widow maker or the flying coffin.”

The twin-engine planes were called “widow makers” because of the early models’ high accident rate during takeoff and landings. After crews were retrained and modifications made to the airplanes, they became far safer to fly. 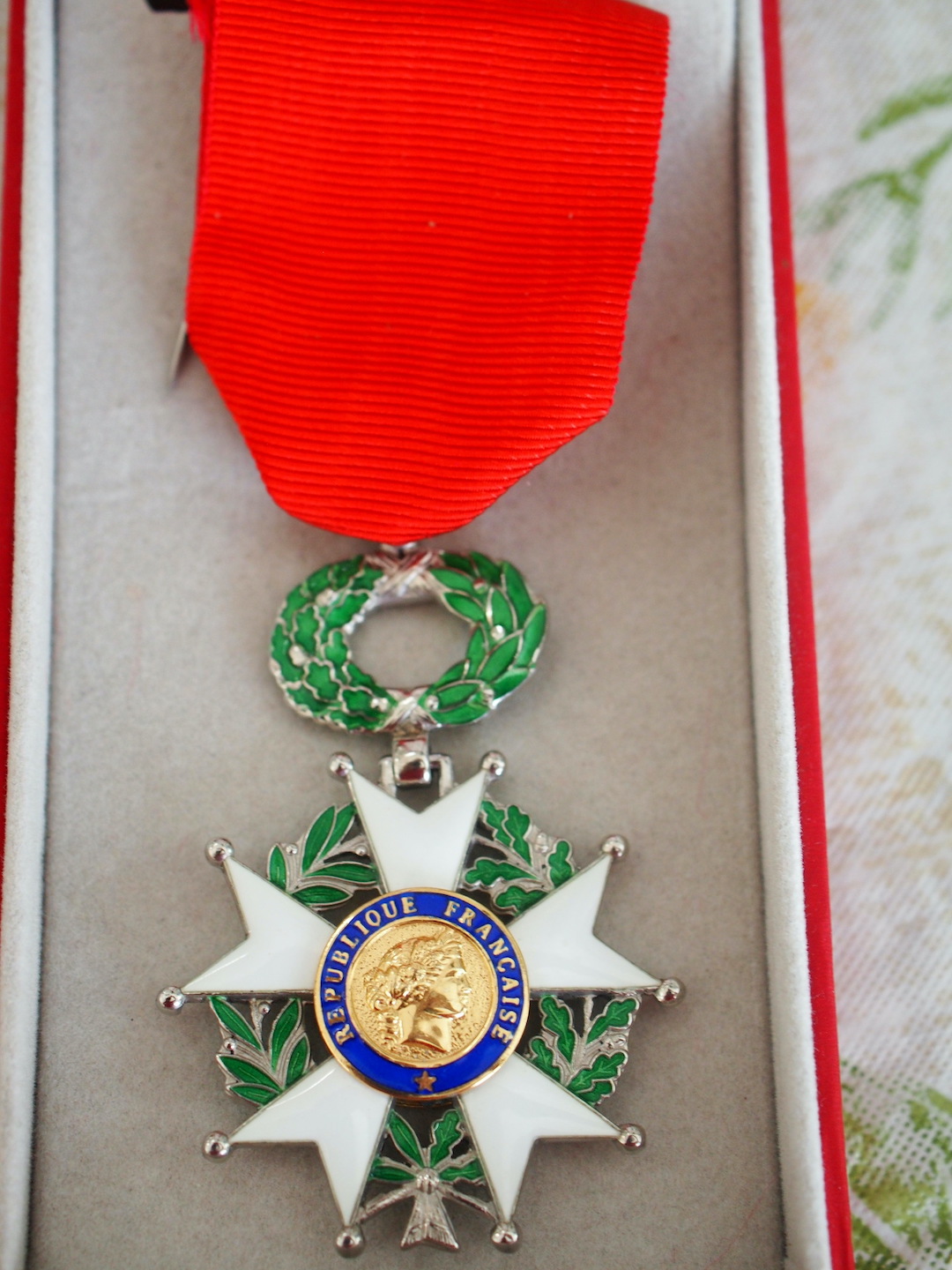 This medal from France represented the National Order of the Legion of Honor (Ordre national de la Légion d'honneur). It is the highest French order of merit, both military and civilian.

“You went to school, and you learned electrical, hydraulic, structure design. Now you’re going to the plant, and you’re going to follow that plane right down the line. And when that plane is built, you’re going to fly on it. You really didn’t need any inspectors, but you were going to make sure that every grommet was put in there right. I flew the first mission with two pilots. One had only flown one mission before. That was a hot plane. He had to fly it out and in. So, we landed. We were flying planes from Maryland to Omaha, Nebraska. They tore them apart again, made the bomb bay bigger and made other modifications. We stayed all night in a hotel. Everything was paid for. Then they would load you in a plane, a C-47 like Charlie (DeGlopper) was in.”

During training, Long experienced adventures and misadventures. “In Nashville, Tennessee, there was no way to lock the place. It was a base. We threw our chutes in the plane. I threw mine under the navigator’s table. In the morning, my chute’s missing. When we first went in, those chutes were all silk, all white. The guys were taking them home and were making dresses for their wives. So, I had a heck of a time. They wanted me to sign a statement charging me for that. I said, ‘Where were your guards?’ So, finally, they gave me another chute. But that thing followed me. I was in combat outside of Paris. I went back to the rear echelon to get some parts, and the guy says, ‘You owe for a parachute.’ I said, ‘You’re nuts,’ and I walked out of that place. He was looking for that damn parachute when I was in combat. It still followed me when I got home. I was in Fort Dix for discharge. I was held up, and I asked what the heck was going on? The master sergeant looked down at the sheet and said, ‘They got it down that you owe for a parachute.’ I said, ‘That happened two and a half years ago.’ A lieutenant said, ‘I don’t know what we can do. You have to pay for it.’ I called them the 90-day wonders, them lieutenants. They hadn’t been overseas like we had. I got in a hassle with him. The sergeant said, ‘Go outside, I’ll talk to him.’ He came back outside and said, ‘You lost that overseas in combat.’ That was it.”

On Dec. 3, 1945, Long was shipped to Europe with the combat engineers on the Queen Mary, called the “gray ghost.” It was an ocean liner that had been retrofitted to transport as many as 15,000 men at a time. “One night, it got colder than heck. We saw icebergs. We went due north. We went into Scotland. Then we went down by train into London. We went to Reading, which was 30 or 40 miles outside of London. We were there from December to May. Then we started to move out to the coast. It was a long haul.”

“Our main outfit came in about four or five days later. There’s no record of it. I don’t know what happened to the combat outfit or anything else. My outfit caught up to me, and we stayed together for the whole war. We operated a main strip between the infantry and the artillery for emergency planes to land on our side of the line. We maintained 48 different places. I saw Europe. On the beach, we captured a German truck, painted OD (olive drab) colors on it, put a fake number on it and drove it all through Europe. We drove through Holland, Luxembourg, and Germany. In Linz, Austria, we met the Russians. We had a great time. I was in four major battles.”

Long said that he encountered Gen. George S. Patton twice during the war. The first encounter took place when Patton’s tanks ran out of gas in September 1944.

“He (Patton) came to our outfit. He couldn’t get gas anymore. Their tanks use the same as our planes: 100 octane. He came in and tried to get our gas. Our main man was a major. Patton was a general. You ought to have seen those two going at it. Our major was a World War I vet, and he didn’t back down to nobody. I think that’s why he never made it above major because he was a mouthy sun of a gun. He’d sound off. He’d pull out a citation from Eisenhower, which said to give Patton no more gas because we can’t keep up with the supplies. We’ll give him all the ammo he wants but he’s gonna sit here. He couldn’t get the supplies to the front fast enough. They went round and round, and finally Patton got into a Jeep and drove off.”

The second time Long encountered Patton, “We were lying in a ditch. We just came through a town on a river. It was all shot up. We had top hats, a chain, and gloves, and we were lying in a ditch, waiting for them to get done shelling us. And he comes through, and he hollered at us. ‘Soldiers, you get your damn…’ Every other word was a swear word. ‘You get your uniform on! You get your helmet,’ and all this kind of stuff. We were in the ditch, laughing at him. But that was the only two times I’d run into him.”

•Next week: Long’s experiences in France and the end of World War II