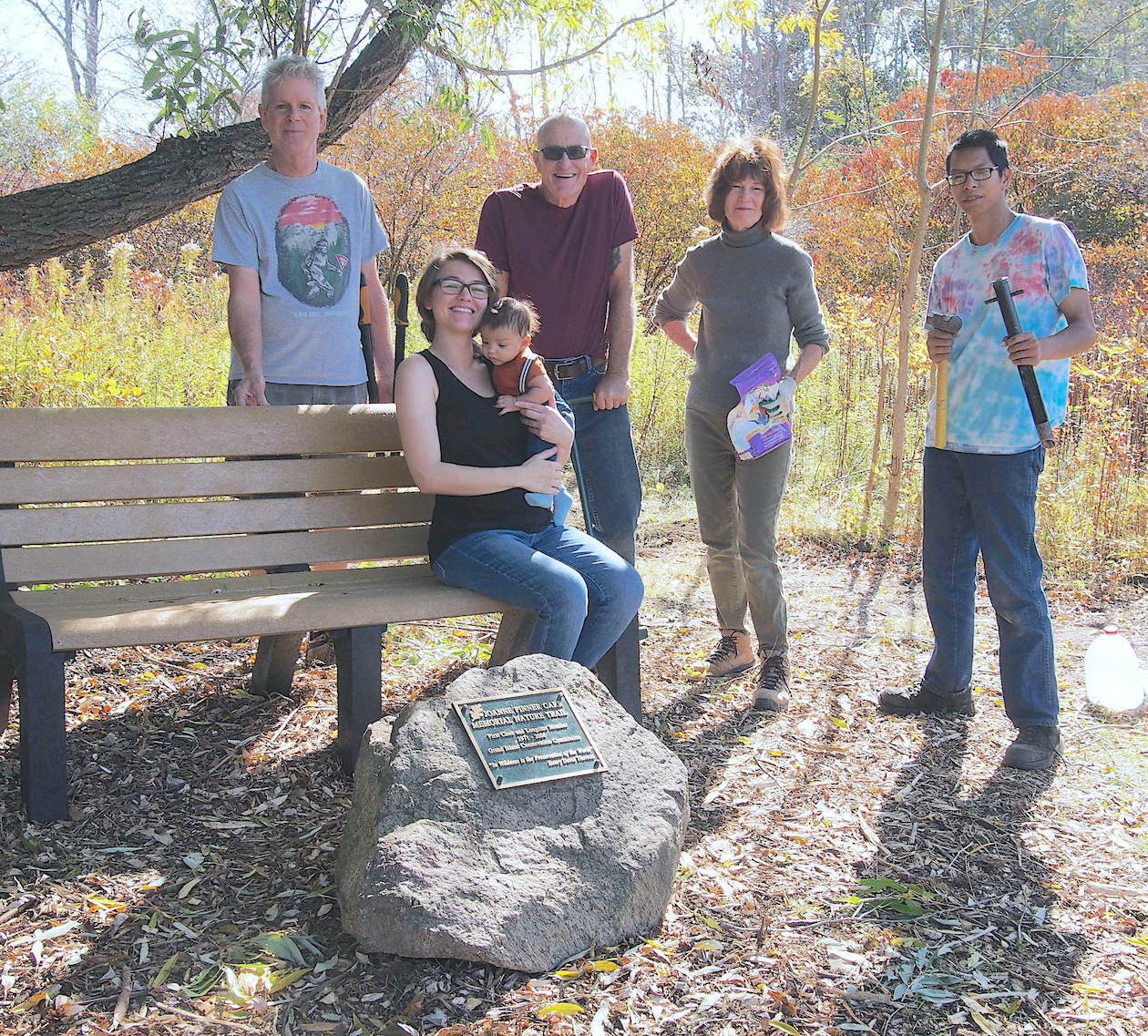 Daffodil planting at Nike Base in remembrance of Joanne Pinner Carr

Daffodils are seen as a sign of hope and remembrance. Because of their bright yellow color, they are seen as a symbol of spring. For the family and friends of Joanne Pinner Carr, who died in 2009, daffodils are a way to remember her life and her connection to the Earth.

On Oct. 11, family and friends gathered at the trail on the Nike Base that was named for Joanne Pinner Carr to plant daffodils in her memory. Tim Carr said his mother, was a “great naturalist. She was always planting, always trimming and managing part of our yard.”

Joanne’s passion for the environment started early, said Karen Carr Keefe: “Joanne’s father, Ralph Pinner, worked for the federal government as a landscape architect. As a child, she saw his work, and that inspired her.”

Joanne also shared her passion for conservation with the community as a member of the Conservation Commission, now the Conservation Advisory Board, from its inception in 1971 until 2006. She also served as its first chair.

“Joanne and I served on the Conservation Commission together,” said Tom Burke, who noted he saw her as a mentor. “She was at the end of her tenure, and I was at the beginning. It was about in 2000. I would give her rides to and from the meetings. I remember that Joanne was so far ahead in her thinking. She told me, ‘Tom, it’s not about today. It’s about 50 years from now. It’s about saving something on Grand Island.’

“She used to draw an analogy. She asked, ‘Can you imagine New York City without Central Park? Grand Island has to preserve these spaces.’ I think of Joanne all the time as I walk these trails. I think that, somehow, she might be looking down and saying, ‘All right.’ ”

Karen said it did her “heart good” to participate in planting daffodil bulbs near the trail named after her mother: “My mom, as Tom has said, was way ahead of her time in terms of the ecology, the environment, and preserving what nature gave us as a gift from God. The fact that this has come round full circle to trails being here that people enjoy, and the daffodils that were planted today will just be a punctuation of beautiful illustration of the work that she has done for the Island in preserving green space and in dedicating areas where people can enjoy nature.”

“We have a little family cabin that we return to regularly,” Tim explained. “The birds would wait in response to her feeding them. Even when there wasn’t any seed there when we showed up, she fed the birds almost first when we got out of the car. The birds would come out of the woods. That’s the kind of gal she was. She was always about nature. She was always about planting, pruning. She was about a little bit of management over nature. That was just her family. Her mom and dad were like that, too. So, it’s easy for us to do the same thing.”

Chelsea Carr said, “I am connected through my family members who were very close to her. She did a great job raising all of the siblings in the family. A couple have passed, including Joanne, and they will be missed. This is one of the ways we keep her memory alive. Sometimes, it can be sad. It’s emotional. Being here to be a part of it all is very inspiring, because she was a part of something bigger than I can imagine.”

“She had a little greenhouse back in the ’70s,” Tim said.” It was a greenhouse that she really enjoyed, to sell her plants. Today, she would be happy that we were here in her honor. The trail represents that. The trail being named after her was a fitting moment that Grand Island needs to have.”