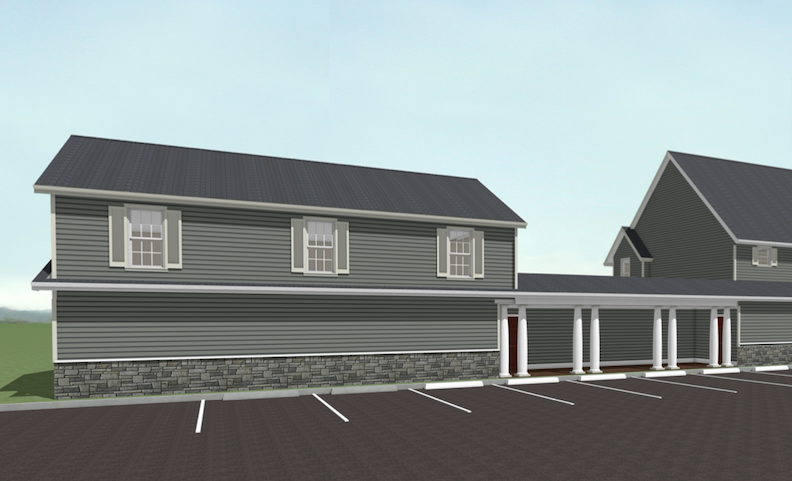 The success of John Kinney’s waterfront business – and that of his tenant – has resulted in a need for upgrades to his three properties.

So said the Whirlpool Jet Boat Tours operating partner/president on Monday, as he presented the Village of Lewiston with plans to improve 115 S. Water St. (home of WJBT and the Griffon Brewery & Gastropub), 125 S. First St. (a multifamily residential property), and 65 Center St. (formerly the Trafford Mansion and “Bucket of Blood”).

“Twenty years ago this fall, we acquired the Riverside Inn and started working on the overall cleanup of that property that was very, very much needed. And what we're here to talk about this evening is a continuation of that,” Kinney said of 115 S. Water St. “One of the aspects of what we're here to talk about, is that we have been approved for a Niagara County street façade grant program. And one of the things that’s always driven me crazy about the property is I despise the sage green vinyl siding on the building. We want to bring something more appropriate, more historic to the building in that regard.

“And this is a bit of a Rubik's Cube for us, because all of these properties that we're going to talk about tonight do interact with each other. And although we're not asking for any actionable item on 65 Center St., when we acquired that property, it was deemed by the building inspector – and we allowed village counsel to come through the property at that time – is that that building was structurally unsafe and it could be taken down. Rather than doing that, we went through the costs of lifting the building up, moving it over, and setting it on to a new foundation. It preserved the old Trafford Mansion, as it was called.

“What we want to do tonight is going to enable us to continue to improve 65 Center St., which right now, we need to get cleared out of all the jetboating wares and all the other things that are in that building. So, our plan is to improve that property and preserve it.”

Kinney continued, “Going on with that Rubik's Cube theme, we have been able to get 125 S. First St. Acquired that out of a foreclosure that that property was all embroiled in. And now, we want to add that into our mix, alleviate some of the challenges that we have – particularly with parking, with particularly what's happened bringing on Griffon as our tenant at 115 S. Water, as well as what's going on with our jetboating business.”

A proposed renovation is slated for the left side of the building at 115 S. Water St. (Renderings by Giusiana Architects & Engineer)

Again addressing the restaurant space, Kinney said the Griffon’s success has resulted in a need to reconfigure the building.

“We clearly did a major renovation of the property since Griffon came on in mid-February. And in these improvements, we have run into some other things that we want to address,” Kinney said. “The one area that we'd like to get approval on is to remove, on a temporary basis, the food trailer, which is now servicing all the food needs on the patio, and pour a proper pad there – a concrete pad for that. The reason for that is not just to situate the food trailer, but the handicap accessibility to the patio at 115 S. Water has been less than perfect. And so, we want to incorporate proper handicap ramping into that improvement.”

“What the property has a complete deficiency of is storage – storage for restaurant, storage for jetboating, and this gives us an opportunity to, on top of those coolers, erect a storage area that is going to give us desperately needed space for all the different wares that's associated with our jet boat operation. Storage for ponchos, for retail inventory, etc., etc. And again, this space would be the ideal for that.”

The coolers would be enclosed by a two-story wood and metal-frame addition, shingled and sided to match existing.

No peak designs will be placed on the addition, as they would compete with the existing doors into the restaurant and the jet boat operation.

Architect David Giusiana said, “We didn’t want to do anything to pull the focus from the front door. The building always has the problem of being two businesses with two front doors.”

Kinney said he wants a similar look across all properties, so “What we're trying to do is we're trying to match up, in our street façade grant, the stone veneer that we use on the front wall at 65 Center. We plan to match that stone veneer for the first four or five feet at street level (at the Griffon), and then go into the board material above that.”

He further explained, “Continuing to the south, one of the areas, again, that needs to be improved upon because of the expansion of the activities there, is we needed an overall redo of the Dumpster area. We want to clean that up, add more room for more Dumpster space, and have an updated enclosure built around that.”

Across the street at 125 S. First St., Kinney said, “What we’re asking for, actionable for this evening, is not an approval of the replacement to the residence that’s there presently. … What we would like to have your endorsement on this evening is the expansion of the parking on the westerly side of the property that connects to South Water. And we will be making an application to the Zoning Board of Appeals for a minor variance to make a garage facility that will be within 5 feet of the property lines.”

Moving forward, the goal is to demolish the existing building on South First Street, install storage garages at the base of the property on South Water Street, and then build up a two-story structure – possibly for use as a tourist home or short-term rentals.

In speaking to the Planning Commission, Kinney said, “Our opinion is that the highest and best use of this property is the continuation of it. The house presently had three residential units in it. And we believe that going from three to four is relatively minor in nature, and makes the viability of the project much better.”

Both the Historic Preservation Commission and the Planning Board approved the plan for 115 S. Water St. The latter panel also gave consent for the plans at 125 S. First St.