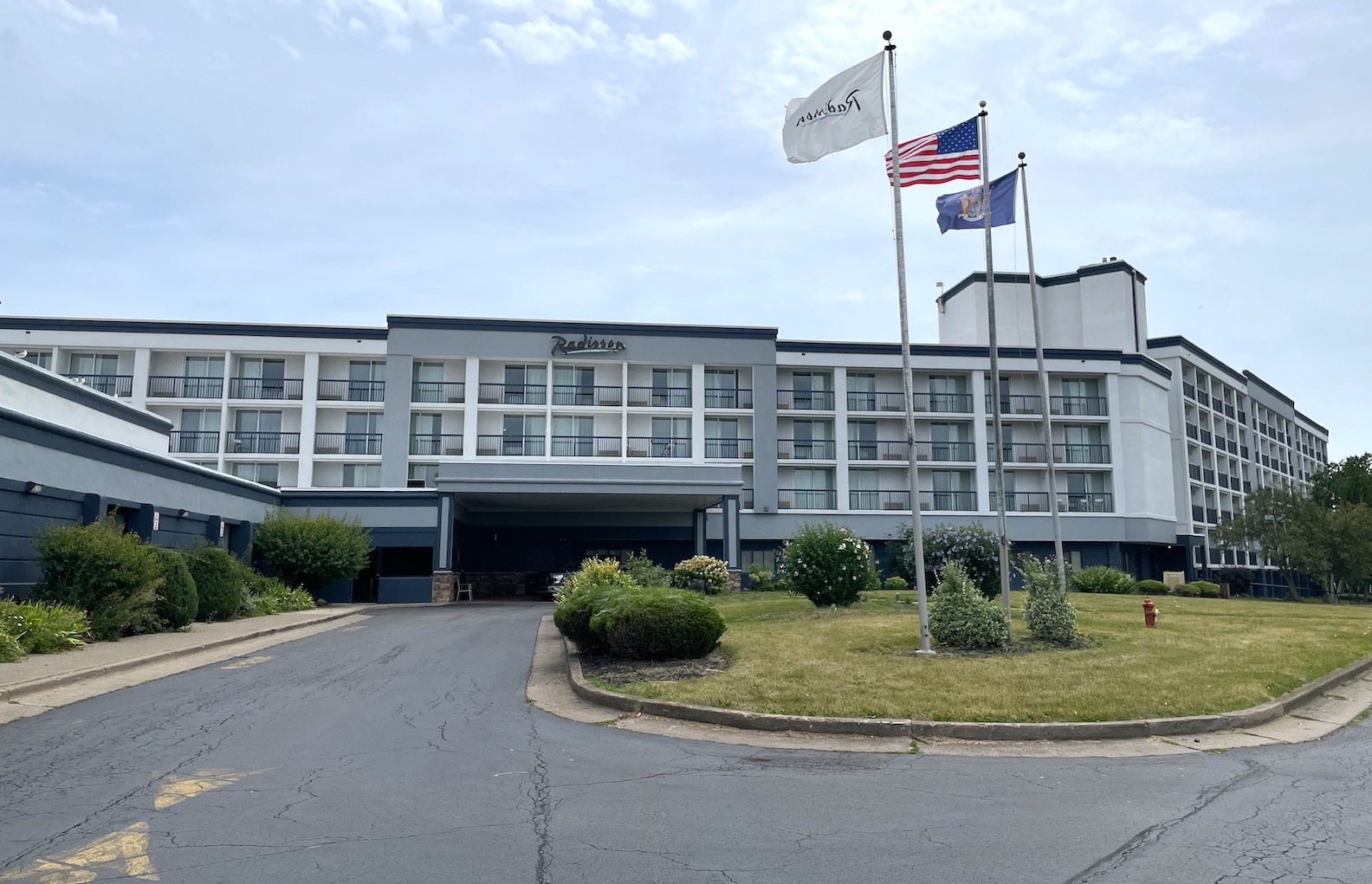 Developers have focus on apartment-style living

Grand Island residents learned more on the future of the Radisson at a community gathering Tuesday in the hotel, during a meeting outlining adaptive reuse plans by developers.

Michael Conroe of Elev8 Architecture in Orchard Park and Justin Earl of JB Earl and Co. of Springville, Utah, visited with roughly 75 residents of the East River neighborhood. Joined by Island native Stephanie Clark, an Elev8 associate, the speakers opened with details on their background and went on to provide visitors a glimpse of what could happen with the hotel property should they acquire it from current owners, listed as the McSam Hotel Group of Great Neck, New York.

“We’ve worked together for a long time,” Conroe said, telling residents their background includes work on two apartment buildings in Buffalo and a current apartment project in the City of Tonawanda. “We’ve had a strong success in apartment development projects.”

Focusing on the Radisson, visitors learned much more on the building’s current state, and of market changes that prompted developers to consider apartment-style living for the future, versus the present operation as a 263-room conference center/hotel. Among their plans are conversion of the building’s current units into a mix of 138 one-bedroom suites and two-bedroom apartments, with market rate rents going from $1,500 to $2,500 per month.

Throughout the session, Conroe and Earl invited visitors to comment on the project and offer their own ideas with project officials in attendance.

“We want to introduce you to what we’re thinking might happen with the future use of this property,” Earl said. “We want to dispel any rumors that may be out there. … We’re not going to pretend that we know the building better than you.”

Discussing plans for the property, Earl continued, “There’s an opportunity to give the building a new life. I don’t think it’s a surprise to anyone in this room, including the employees, that this property has struggled as a hotel for many years.”

He brought up a number of problems, including neglected landscaping on the hotel property; the condition of the riverside dock; closed and unused conference areas; and overall reduced hotel operations.

Earl then proceeded to enlighten residents on the issues the current Radisson is facing.

“It was built when Niagara Falls was the place that the country wanted to come and see. And it was built to that type of capacity,” he said. “Tourism has changed; the need has changed, and the number of hotels has proliferated (in the area). They’re a lot closer.”

Earl said his group previously purchased a 400-room hotel in Salt Lake City, and then realized the drastic changes in the convention business and the resultant negative impacts of running a hotel in that city.

“We were hearing (from builders), ‘It’s too much, it’s too big,’ ” he said of the hotel’s 400 rooms and 40,000 to 50,000 square-feet of surplus conference space. “I saw this property in an incredible location outside of Salt Lake City and thought, ‘It doesn’t want to be a hotel anymore.’ ”

He said he turned his focus to reimagining the hotel’s footprint: “Cut this building in half; let’s make half of it residential; let’s make the other half a boutique hotel, build new restaurants, add office space. Let’s give it new life.

“Now we’re underway for construction on a half-billion-dollar redevelopment of an incredible location in downtown Salt Lake City. It’s breathing new life into an half-billion asset that needed new life.”

Turning his attention to the Radisson, Earl said he realizes its potential: “There’s a quarter-mile of river frontage here. It’s unbelievable.”

He noted the potential uses of a trail with river access for residents, and pointed to hotel’s fitness center that is currently used by 700 members. Earl told visitors there are all types of possibilities: “What if we improve the fitness center, make it larger, make it better, and leave it open to the public?”

“This property cannot afford to remain current,” Earl continued. “So, it’s in a downward cycle, and we have the opportunity to pull it out of that downward cycle and elevate it to a totally different use.”

Earl said the goal is to cut the building’s room count in half and “bring life” to the vast amount of open space within the complex, through improvements to the fitness center and two pools, the restaurant, commercial areas and the overall physical structure. “We want a larger fitness center, and we think the property wants a revitalized dock and a great restaurant. We think the property wants that.”

He went on to mention such possibilities as day care or unnamed retail/commercial uses. Earl said the building would not be demolished due to cost, but that its future as a hotel was just not practical.

He said that, while there are always options of continuing the hotel under another brand name, developers felt residents would not be in favor of that – and economically, it was just not considered viable.

“The logical conversion here … is a residential property,” Earl said. “It’s lived its lifecycle as a hotel, and we think that’s the proper use for the new life. And let’s bring some ancillary uses that will complement the new life.”

Earl said the complex would appeal both to the age-55-and-over market as well as the under-35 market: “They love these type of properties. … It’s a place with great amenities – a fitness center, swimming pool, riverfront access – they want to enjoy this type of lifestyle.

“This is not low-income housing; we’re not interested in that. The property costs too much to us, to buy, renovate and give it new life to charge affordable housing rates. So, this will be a market-rate project, for people who have to have a decent job in order to afford to live here.”

He projected apartment sizes would be in the 630 square-foot area for a one-bedroom unit, and 930 square-foot for a two-bedroom living quarters.

As far as its current status with the Town of Grand Island, Conroe told visitors the Town Board has established itself as the lead agency for State Environmental Quality Review (SEQR). The Planning Board recently voted 5-2 to recommend the project move forward. The plan now heads to the Town Board on Monday, Aug. 15, where a public hearing is scheduled.

“That is the public session, where you can go and tell how much you love the project, and support it,” Conroe said, drawing laughs from visitors. “The Town Board will then take two weeks to consider it … in September.”

Issues still to be considered, according to the developers, include a request to change to Planned Development District zoning from the property’s B-1 Highway-Business status.

He said developers also seek incentive zoning for the property, due to its size differences of 12.5 acres versus a 25-acre property size under the PDD zoning.

“That means we (have) some called benefit,” he said. “So, we’ve talked about giving the town some lane on the south side of the property” (known as the Ferry Landing area).

Earl said there are other ways developers could satisfy the town on the incentive zoning area beyond the gifting of property. Mentioned was monetary assistance, as well as the building of some type of community center or other enticements.

“There’s other ways to do incentive zoning, so we’ve applied for that. We still have to negotiate with the Town Board,” he said.

Earl noted the project has not yet reached site plan status with the town at this point. That would ultimately be determined once the requests for PDD and incentive zoning issues are addressed as project planning continues.

No financial details were revealed. Earl said no height increases to the building are being considered; the restaurant and commercial use would remain an integral part of its future; and the property’s existing footprint would be maintained. He said overall design work remains in progress, but waterfront improvements are expected.

Earl told visitors the development team hopes to complete its purchase of the property before the end of the year. 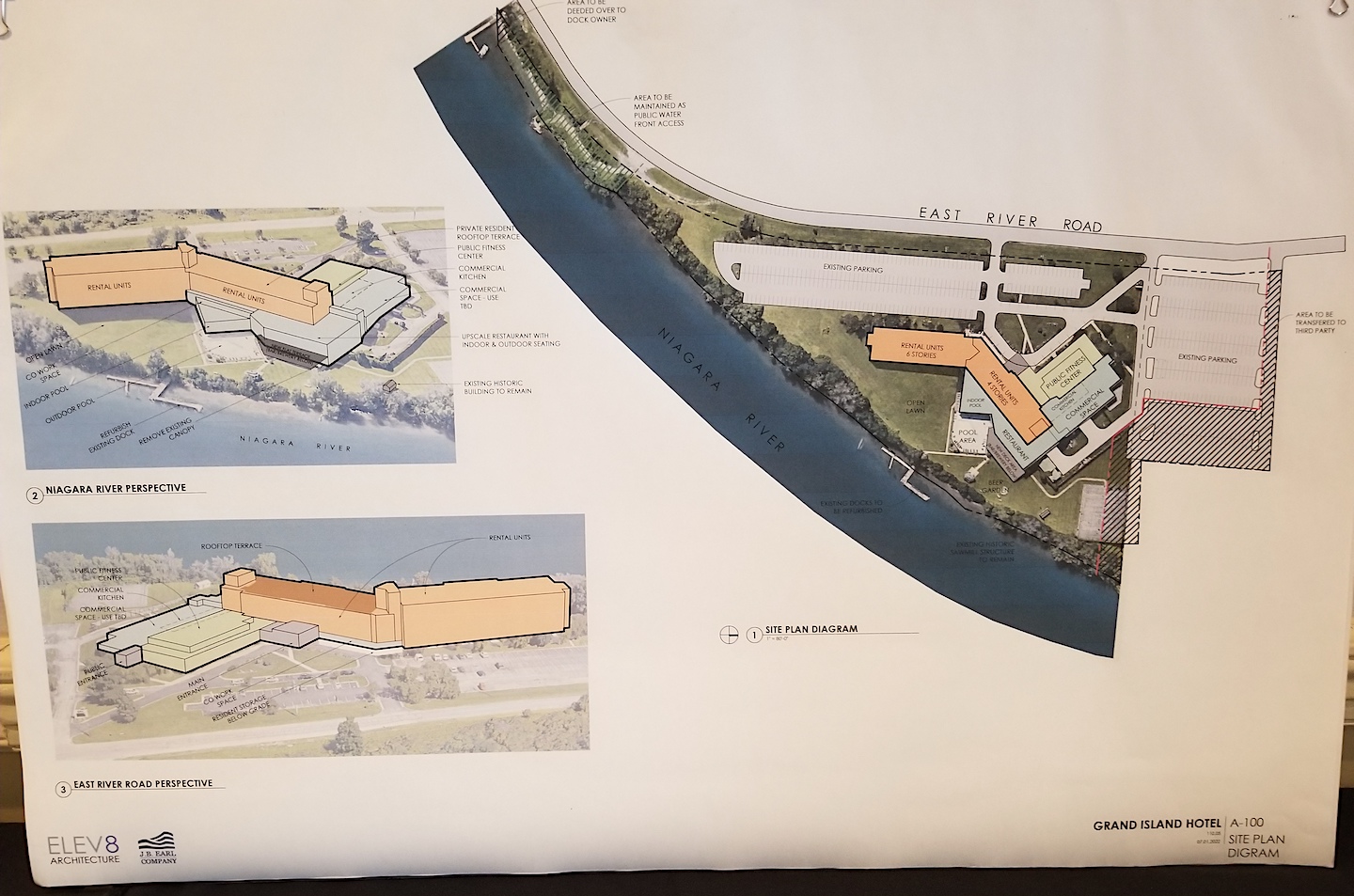 Developers explained plans for new residential living on the site of the current Radisson Hotel complex at Whitehaven and East River roads. (Photos by Terry Duffy)