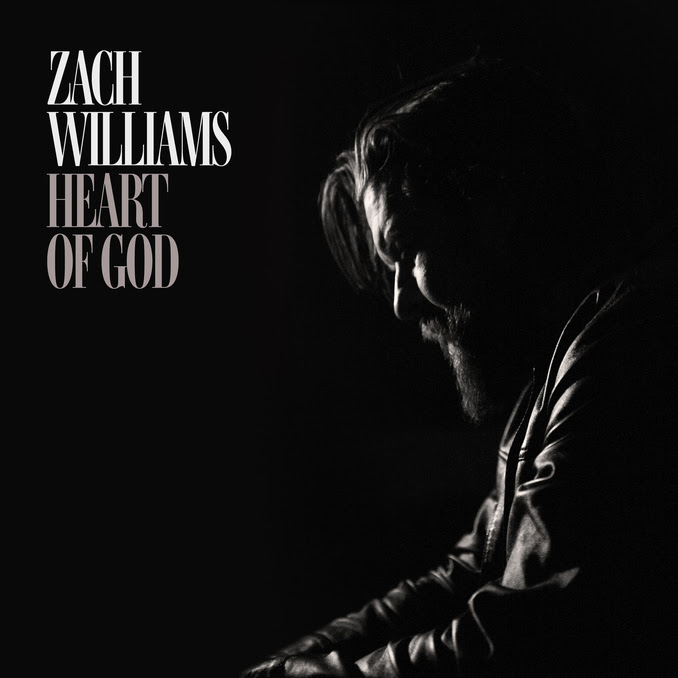 Artist behind hit songs ‘Chain Breaker,’ ‘There Was Jesus’ to perform free concert

While myriad musicians have hit the road this summer to perform in hot, crowded bars, theaters, arenas and amphitheaters, dripping sweat and giving it their all in the name of entertainment, Zach Williams has taken a different approach.

“This has probably been the best summer in a while. We took off quite a bit. We played up until May the first, and then I think between maybe May 1 and now, we've maybe played five shows all summer long,” he said in a phone interview last week. “We went on some vacations. My family had a 50th wedding anniversary, my mom and dad; and then me and my wife and kids went to Hawaii for about 10 days.”

“This has been a good summer so far,” he noted, “But we're fixing to get busy.”

Williams will perform at the Erie County Fair on Aug. 15. He then has both a fall and a Christmas tour to tend to before year’s end.

Vacation time was good, but his calling is greater.

“You know, my whole thing is I try to write songs from a place in my life, and experiences that I've gone through, and hopefully there's somebody at a concert that can relate to something that I've gone through that maybe helps them through a difficult situation in their life,” Williams said. 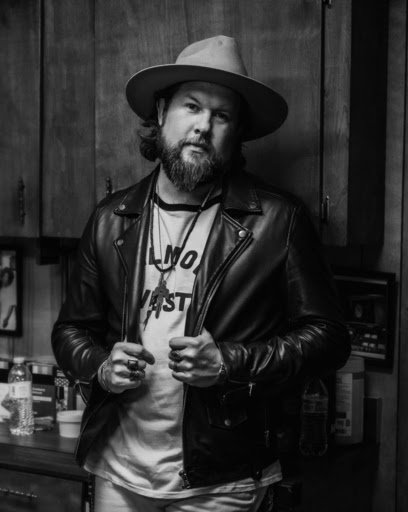 Like Noah’s flood, Williams has taken the Christian music world by storm in recent years, sweeping up awards, praise and unbelievable duets along the way.

His team said, “He made history with two consecutive radio No. 1 hits for 35 weeks as a debut artist (‘Chain Breaker,’ ‘Old Church Choir’), while ‘There Was Jesus,’ his duet with Dolly Parton, topped the charts for multiple weeks.”

Singles “Old Church Choir” and “Fear Is a Liar” each went Gold – as did “There Was Jesus,” which he performed live with Parton at the 53rd Annual CMA Awards. That song made the Pandora Top Spins chart for 12 consecutive weeks and was named one of Pandora’s top 100 songs across all genres.

For Williams, however, it’s the message that matters. To help carry that across, “We've added quite a bit of new people and new parts to my show, to my band,” he said. “We added a horn section; so, I've got three guys that tour with me now that make up our horn section. And I've got a couple of girls that tour with us that are backup singers now. And so, the band has grown from six people on stage to 11 people on stage now. We've added some new arrangements to some of our older songs that we've played for a while, and then we've got a new record coming out in September – and I just released a new single (on July 29). And so, we'll be playing some new music, and just looking forward to doing something a little different for some folks.”

On stage this year, Williams has recognized the world is a different place, and in need of a different solution.

“I think 2020 put a lot of things in perspective for a lot of people,” he said. “I know, for myself, it taught me to appreciate the things that I have and not let a day go by. Just to live in the moment, and to be available and to be present. Because you never know when things could all be gone. And that was kind of my takeaway from that year.

“But I think there's also this, you know, people didn't hear music for some time. They didn't get to go out and do live shows. There's an excitement now, when we get to go out and play these shows, that it's a little different than it was before. Because we realize, like I said, it could all be gone.

“But I do think people need that message right now. I think everybody needs that message of hope. And so, I'm just glad I get to play a small part in all of it.” 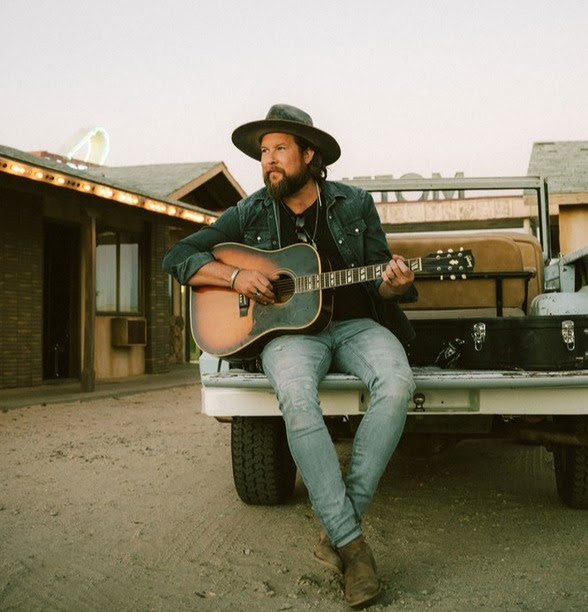 “Well, I mean for me, like I said, earlier, I'm always trying to write from some past experiences, or season of life that I've gone through, or something that I feel like people can relate to that they know we all walk through the same type of situations a lot of times,” he said. “For that song, for me, I grew up in church. I was a church kid. Went to church every Sunday. Every Sunday, I went down to the front. Every Sunday, I said the prayer. And, you know, I realized at 33 years old that that's really all I had ever done. And growing up as a kid, I just remember having this idea of God being this, like, judge and jury, kind of sitting on a throne, shaking his head at everything I did. But when I gave my life to the Lord … when I had my own children, I realized that he loves us the way we love our own kids – and wants us to have every chance and every opportunity to come to know him.

“And so, for me, it's the opposite. He's not sitting up there shaking his head, because, to go to the cross, he chose to do that for all of us. And that's the idea behind that song. No matter where you've been, no matter what you've done, what you're going through in your life, God loves you. When he sees you, there's only love in his heart.

“There's no room for all that other junk that we carry around with us. He's made us new. So, that's kind of the idea for that song. My prayer was that people are going to hear that and realize, ‘Man, I'm seeing this in a totally different way than God sees it. He sees something different when he looks at me.’ ”

Thanks to YouTube, it’s easier than ever for musicians to share their words in a visual manner. Williams and his team crafted a gripping video to showcase the “Heart of God.”

“The idea with this video … it's following a couple of people that are struggling with a major decision in their life,” he said. “This guy goes out to the desert to basically end his life; and this girl, you can tell she's a runaway, and she's pregnant, and she's not sure what she's gonna do. That was kind of the idea.

“But that's how God works: In an instant, in a moment. He can get your attention. And when you realize how much he loves you, things can change just in a second. And so, that was kind of the idea, like how do we create something as a visual that makes these lyrics mean even more than they are, or you actually pay attention more to the lyric when you’re watching it.

“I love getting to be a part of the video; and kind of being the guy that is in between the two rooms – and all this stuff's going on – and here I am writing this song and sending this lyric to this guy that changes his life. And then this girl meeting the receptionist at the beginning of the video. It was just kind of like this little act of kindness and people paying it forward.

“I've always loved stuff like that. Videos are fun for me. I grew up and went to college for a graphic design degree, and I've always loved the arts and things like that. I just love the chance to create, and try to put something visually together that moves the lyric even more.” 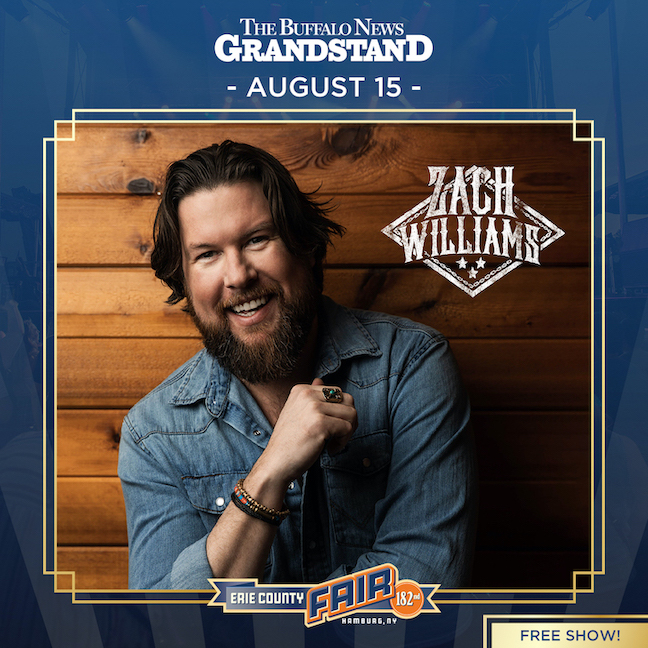 •Grammy Award-winner Zach Williams will perform at the Erie County Fair at 8 p.m. Monday, Aug. 15. This performance is free with gate admission. No grandstand tickets are required for entry.

Williams is online at ZachWilliamsMusic.com.