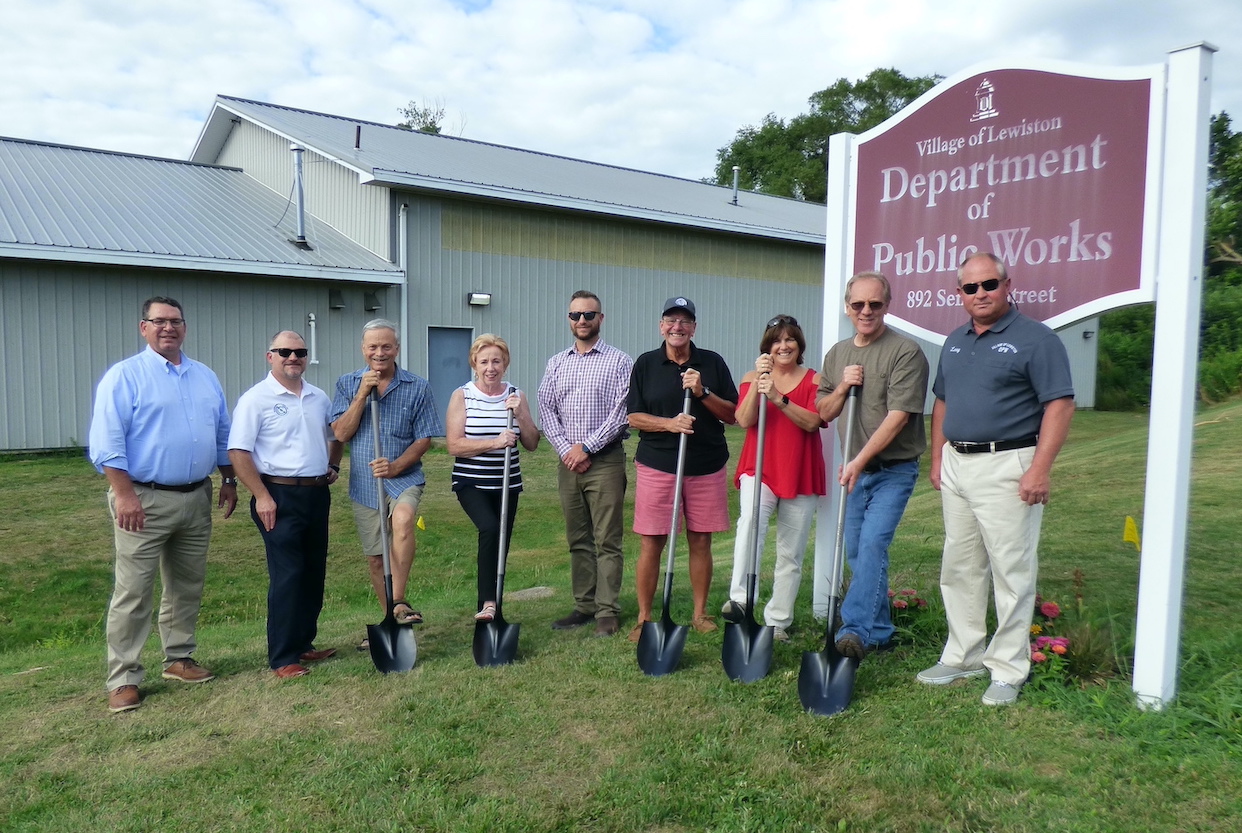 Village of Lewiston trustees join with Department of Public Works Superintendent Larry Wills and members of Nussbaumer & Clarke and Peak Construction Group to announce start of renovations at the DPW garage.

Trustees in the Village of Lewiston on Monday gathered at the Department of Public Works to break ground on a $1.8 million expansion to the DPW headquarters.

Construction has commenced on two additions along the south and east sides of the DPW building on Seneca Street. The first and largest new unit, at approximately 3,800 square-feet, is projected to run parallel with the existing garage. A second unit, pegged at 1,250 square-feet, will be added in next to the existing building.

A third structure, at approximately 1,800 square-feet, will be a standalone unit earmarked for use by the Village of Lewiston beautification commission and Lewiston Garden Club. It will be situated closer to the road.

DPW Superintendent Larry Wills said, “There were two main reasons why I started to pursue this about two years ago with the mayor. The first one was we do have a lot of expensive equipment that the village taxpayers have paid for over the years, and we want to try to preserve them. They sit outside all the time, because we have kind of a small main garage. And so, it's all about taking our investment and making it last longer. And we can do that by keeping most of the equipment inside now – as much as we can.”

“We're a municipality that we do everything. We do water, sewer, trees, sidewalks, highway, parks – you name it, we do it. So, we have multiple different layers of tools for us to be able to do our work, and a lot of it's sitting outside.”

Wills said the second reason for requesting the additions is “the third building, which is all by itself; we call that the ‘beautification building.’

Wills said the “beautification building” will solve a number of problems.

“They can come and go as they want. They don't have to get a hold of me to come in the garage,” he explained. “It's going to be a heated garage with a half bath, so they can have meetings there. And they can fluff wreaths there. They can paint pots, if they want, or any type of adjustments that they want to do – any time of the year. … 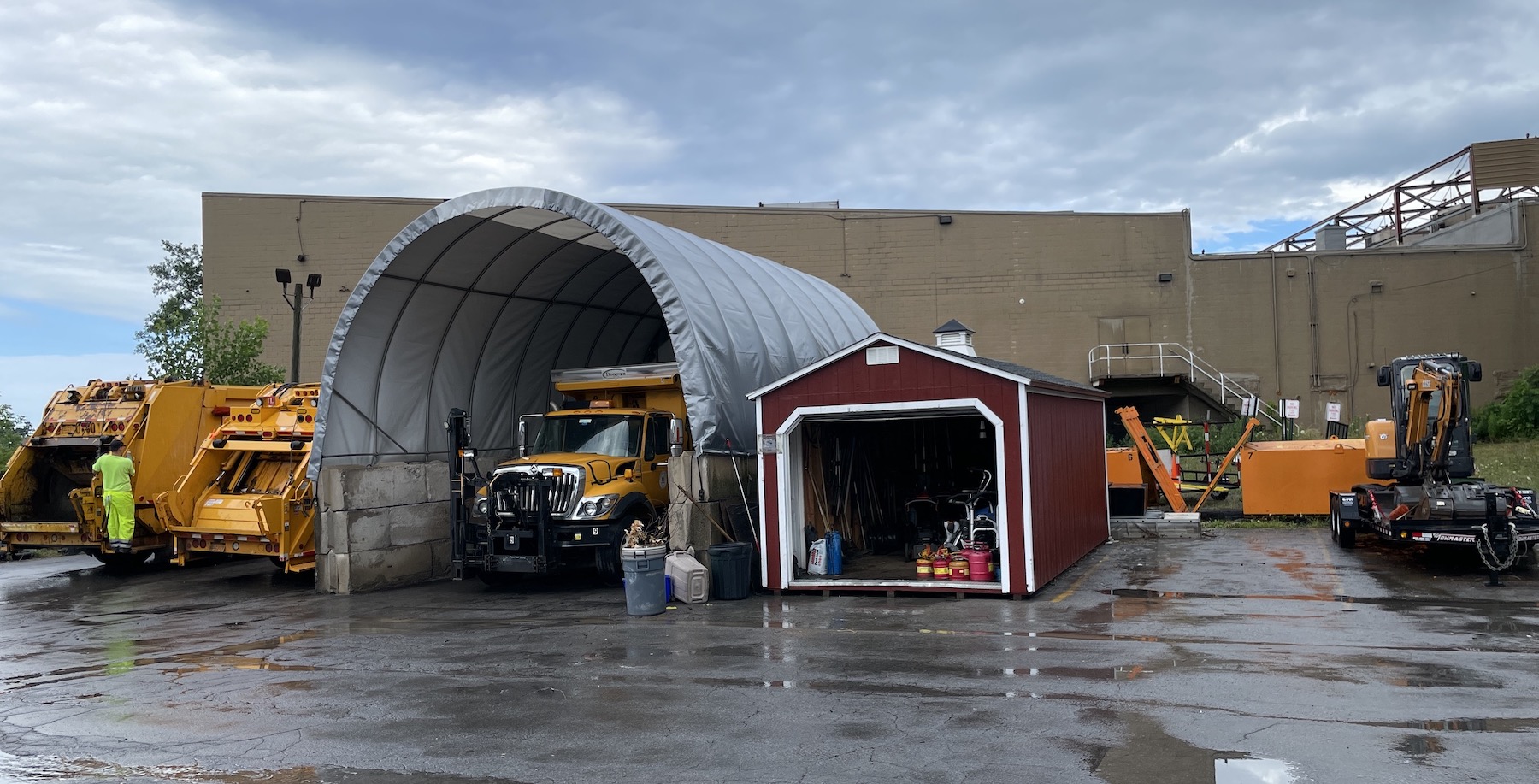 The Village of Lewiston Department of Public Works has to be creative in storing vehicles and equipment, often utilizing space outside the garage. 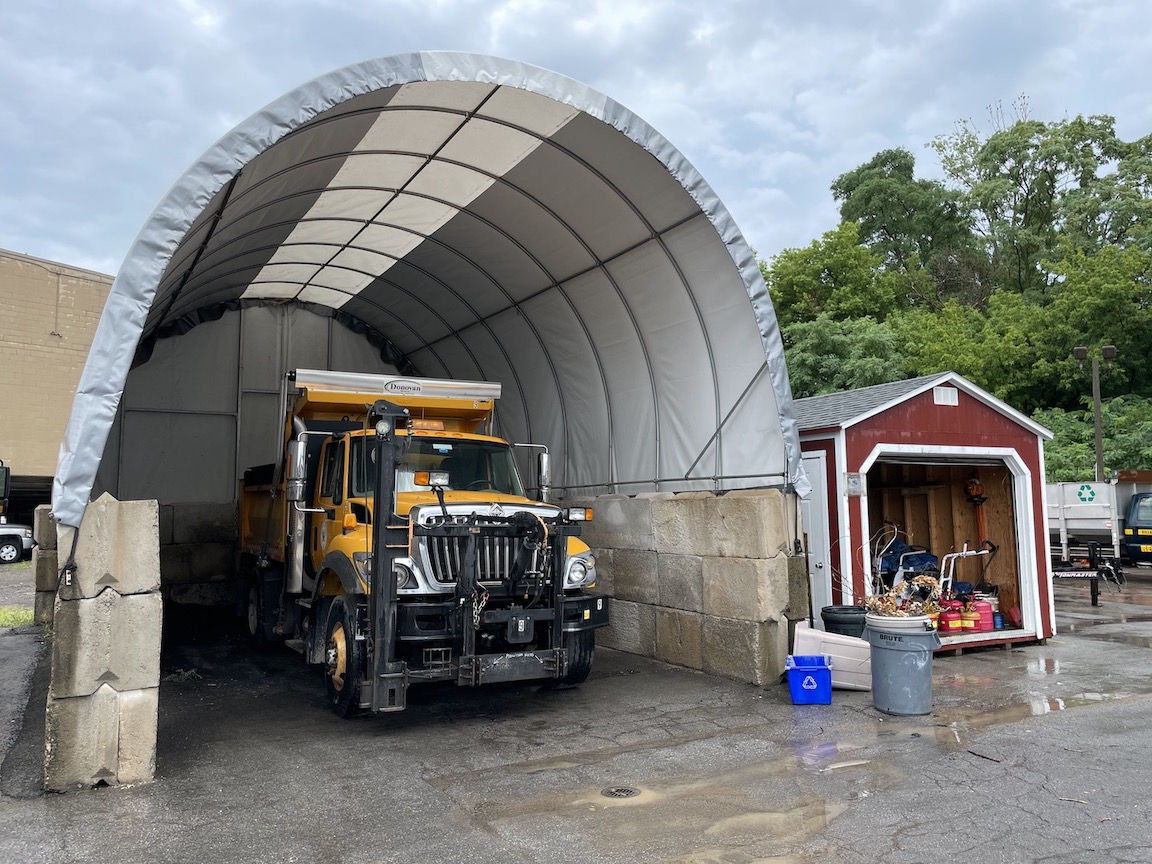 Deputy Mayor Vic Eydt, who serves as liaison to the DPW, said, “It's been long overdue. For all the new equipment that we bought in the last three or four years, instead of storing it outdoors in the winter and all of the elements, we’ll be able to put them in the building. And it’ll last.”

He said it will be “much more convenient” for the volunteers to access their materials in the new building, which “will be a great asset.”

The Village Board previously voted to take out a $1.8 million bond to pay for the DPW addition. When trustees were preparing the 2022-23 fiscal year budget, accountant Pat Brown advised them to use some of the municipality’s almost $3 million fund balance.

“This will be a prime project to use it on,” Eydt said.

He noted the village combined an outstanding bond (financing the existing DPW garage) with this new one and, in the process, received a lower interest rate.

In addition, “We’ve applied for some grants.”

Trustee Dan Gibson said, “We definitely need the space. All the equipment they’ve bought – there’s no sense in leaving it out in the elements. The Garden Club needs areas for their storage. It’s definitely a great idea.”

Trustee Nick Conde said, “I’m glad to see it come, and I’m glad to be a part of it.”

Mayor Anne Welch said, “I’m excited to see it start. It’s really going to help Larry and the guys out with the equipment, and the Garden Club with their own personal space. It’s long overdue.”

Trustee Tina Coppins said, “It’s a win-win for everyone.”

“They're going to start clearing the land,” Wills said. “The first phase is excavation – digging out the three building areas for footers – and then start laying drainage pipe in, and getting the concrete all set up.

“The steel building part of it had to be ordered, and it's going to take a couple of months. But, in the meantime, the concrete will cure while we're waiting for the steel.”

With any luck, Wills said, “It’s going to be done by the spring. It all depends on the steel order. If it comes in earlier, they're going to get going on it.

“Now, they're predicting November is when the steel's coming in. So, obviously it depends on weather, whether they can work out there in the weather or not. But they're hoping to be done by the spring.”