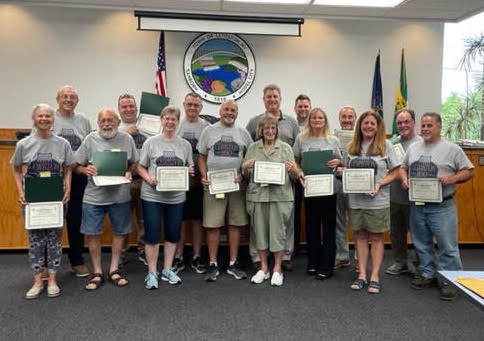 Steve Broderick and the Lewiston Town Board recognized the work of the bicentennial committee at Monday's session. (Submitted photo)

Lewiston Town Board members had a relatively light session Monday. The meeting was marked by recognition of the bicentennial committee for a job well done at the recent commemoration, as well as a positive town audit received for 2021-22.

“To get things started off, we had a spectacular bicentennial weekend over the Fourth of July,” Supervisor Steve Broderick told committee members in attendance Monday at Town Hall. “The bicentennial committee was formed in 2018. It was four years of planning, selling merchandise, coins, stickers and hats. The fundraising – over $46,000 – was used for fireworks, bands and everything involved in the weekend.”

Broderick noted the work of Town Council members Rob Morreale, John Jacoby and Bill Geiben, who worked with the committee throughout the planning for this memorable event. He went on to present certificates of appreciation to all who were on hand.

Next up, representatives of Dresher & Maleck LLP visited with board members for a brief presentation where positive news on the town’s financials was heard. Among the highlights: general fund revenues of $2.9 million, with expenditures of $2.7 million and $200,000 increase in fund balance; Highway Department revenues up $3.5 million, representing an overall fund balance increase of $3.7 million; and a Water Department account increase of $476,000, with $1.5 million available in overall fund balance.

“Overall, high grades; there are no reportable findings in our audit,” Dresher & Malecki rep said. You’re in a stable position. The town made improvements in its fund balance for capital projects.”

“A few updates: We’re running our summer camp right now at Kiwanis and Sanborn,” she said. “We’ve been getting an average of about 60-65 kids in Kiwanis, and Sanborn has had an increase from the past. We’ve had about 30-35 kids; so, we’re doing real good over there. We’ve had Nickel City Reptiles, and the fire department over there; it’s been a lot of fun.”

Cvijetinovic said baseball season has ended, with just one home game still remaining as of this week.

“This year, all the kids got medals and trophies; and for this year at their last home game they had a pizza celebration,” she said. “Favorites Pizza was kind enough to donate over 55 trays of pizza. We also had Tops donate around 15 cases of water; that was super helpful as well.”

Cvijetinovic said her department was beginning to plan for its fall and winter programs, with one to take place at the Lewiston Senior Center in October.

•Broderick said the town would pursue a traffic study of the Ridge and Dickerson roads intersection with the New York State Department of Transportation and Niagara County DPW. The town’s latest request is in response to an increase in traffic accidents at the intersection, of which one resulted in a recent fatality.

“As everyone here knows, we’ve had several accidents at Ridge Road/Dickersonville Road,” Broderick said. “The county, even the Town of Porter, has asked for a traffic study.”

He requested a formal resolution from board members for NYSDOT and the county DPW to conduct a study of the intersection.

•Broderick also announced Lewiston has entered into a contract with New York state for maintenance of the Niagara Parkway Trail system in the town.

“We have the Niagara Parkway Trail contract, which we have never had before,” he told board members.

The contract calls on the town to coordinate $100,000 in paving/resurfacing repairs to the bike path, plus installation of park benches along the trail. Funding is expected to come from the town’s capital account.