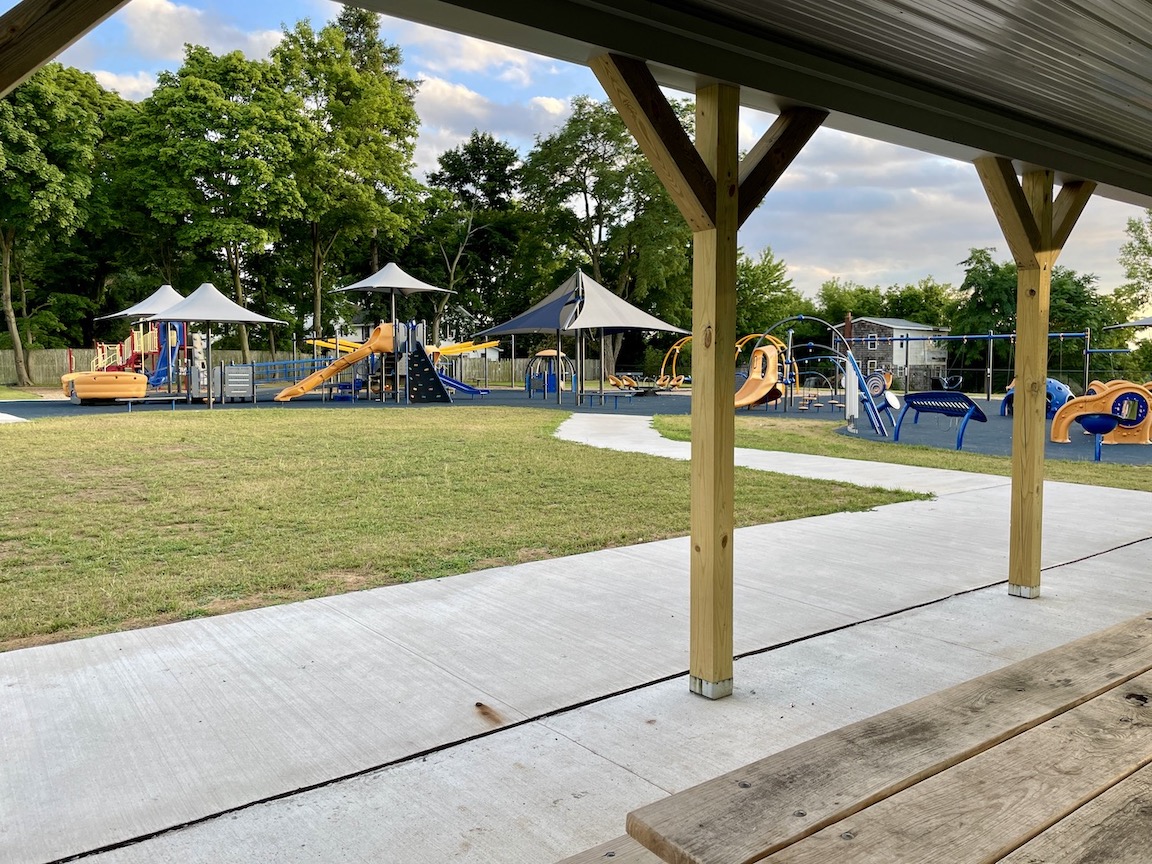 Village of Lewiston trustees would like to add new security surveillance around the inclusive playground at Marilyn Toohey Park, but they're concerned about the camera equipment's ability to capture people's faces if the lens is stationed way back at the pavilion.

Trustees willing to purchase equipment, but only if results are likely

To see or not to see – that is the question Village of Lewiston trustees are grappling with as they decide whether or not to upgrade surveillance at the new inclusive playground in Marilyn Toohey Park.

The municipality can use a portion of the proceeds from its “Big Yellow House” sale to purchase better camera equipment – at $5,007, it would only be a fraction of the $100,000-plus still in that account line – but the board would be reluctant do so if the recorded image resolution isn’t sufficient to identify troublemakers at the site.

Graeme Litt of Technical Solutions provided two presentations to the Village Board, noting his experience in providing security systems to the Brickyard and Gallo restaurants. A village resident, Litt is willing to provide technical enhancements at up to 50% off the rate he normally charges.

“What we’re looking at is upgrading the system in here to allow cameras on the new (park). I’ve come up with some sort of solution for the town to save them money, in the sense of using what they currently have in place, and trying to add a few cameras – and then maybe remove cameras that aren’t as useful,” Litt said.

He added, “To have a splash pad and a water park and not have thought to put cameras in is kind of, to me, a foreign concept. (Kids) are running around; there’s a bunch of water; slipping and falling – for a municipality, it’s got getting sued written all over it. Trying to protect you from that would, obviously, be getting a better camera system.”

Litt acknowledged two immediate challenges to security improvements: The village budget is already in place for the current fiscal year – so, buying elaborate, top-tier cameras right now isn’t feasible. In addition, the playground doesn’t have ideal electrical infrastructure. As is, a new camera would likely be installed either by the comfort station or the pavilion – which lacks lighting. From those distances and angles, it’s less likely a camera can capture faces in a clear-enough resolution where a person could be identified.

Lewiston Police Department Chief Frank Previte said, “For us to be able to do anything, (we need to identify people). It doesn’t do me any good to know that there’s somebody out there doing damage unless I can identify, in some way, who that is. And that might help me. But the face part, and being able to see – or to zoom into the digital afterwards – is a part of it.”

Trustee Tina Coppins, who works with security systems as part of her job as a property manager, asked Litt several technical questions about setup and operation. She and Trustee Dan Gibson spoke with Litt again following the meeting, looking into camera feeds and equipment, and further discussing project logistics (as pictured above).

Welch said, “I think it’s very important that we have security cameras in the park. So, we have to do something.” 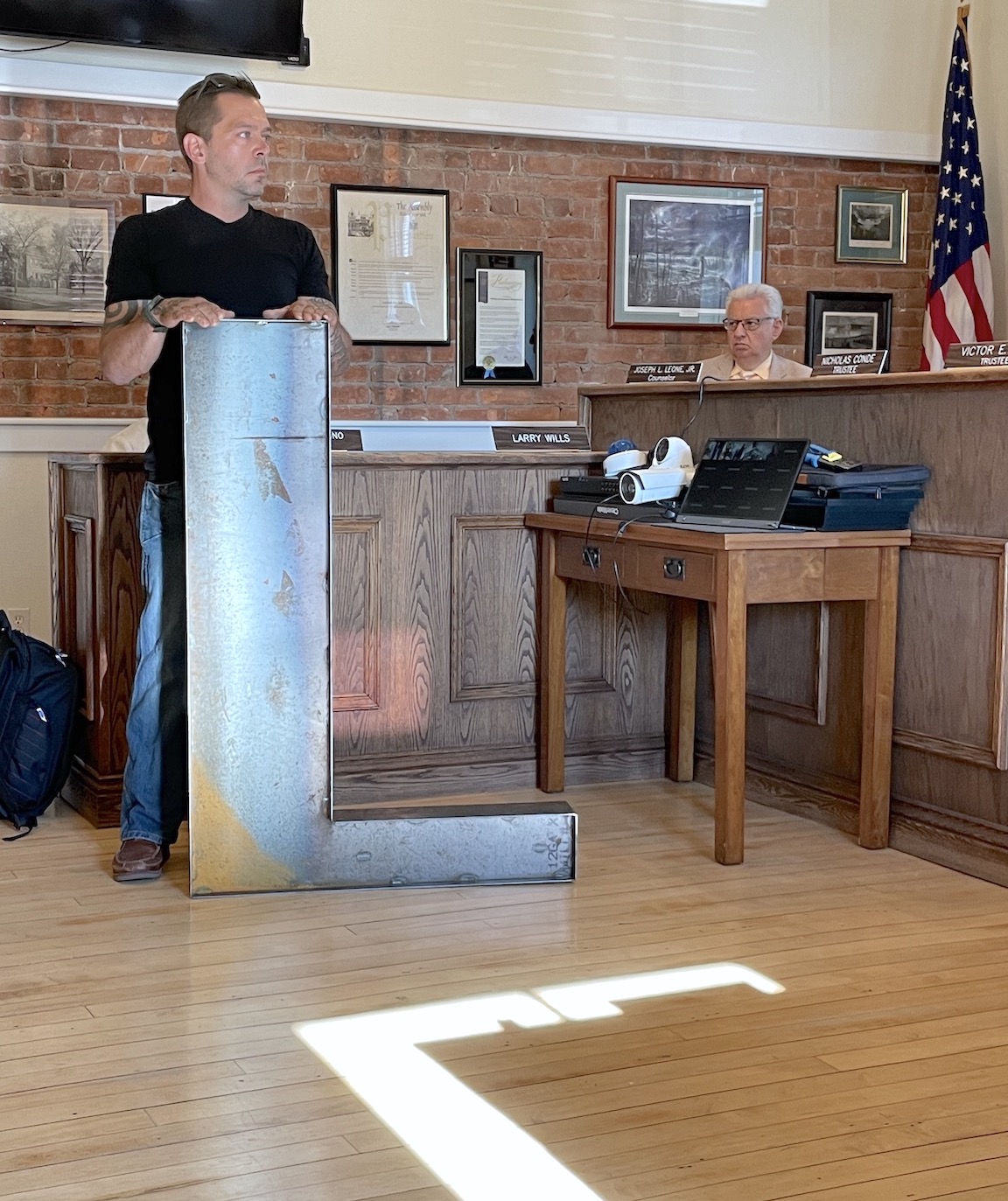 Dan Buttery explains his new “Lewiston Landing” metal art project. He brought an “L” to show trustees the size of the lettering he intends to use.

The artist said he intended to make something prior to the coronavirus pandemic but, once COVID-19 hit, his attention shifted to creating and donating intubation boxes for hospitals.

Buttery recently revisited the idea, first considering Academy Park. He noted Welch said the waterfront might be a better spot, and he agreed.

This project was described as having 4-foot metal “Lewiston” letters fastened onto a pedestal and raised up to give the impression of floating. “Landing” letters would be 3 feet, and placed on a secondary tier. A series of 5-foot stainless, 3-D trout would offset the wording. The sign’s total length was pegged at 20-25 feet – the width of the step-garden next to the fish-cleaning station.

Buttery said he found an “old-school” font script for the wording, and will use a green copper patina paint to give the sign a vintage look.

“I think it’s really great that you want to do something for the community,” Welch said.

Buttery has crafted art for the Gallo and Brickyard restaurants, as well as his alma mater. He recently made the metal framework for poet Robert Giannetti’s “Peace Garden” poem.

“You see when people are on vacation, they try to find somewhere that they can take a picture to say that’s where they’re at,” he explained. “There’s probably nothing in Lewiston to say, ‘Hey, I’m in Lewiston, New York.’ Something like this, with the exposure down there, people are going to be taking pictures with it. It’s going to be a staple for years to come.”

The public can comment at the next municipal meeting, which is scheduled for 6 p.m. Monday, Aug. 15, at the Red Brick Municipal Building, 145 N. Fourth St.

•A request made by Bianca Falsetti/BB’s Entertainment of WNY Inc. for use of Academy Park to host a fundraising event to benefit women’s shelters in the “716 community.” The event is set for Saturday, Aug. 20, and will feature women-owned small businesses, Be OK yoga (4-5 p.m.), food, a basket raffle, and a BB’s Bingo session from 7-9:30 p.m.

Organizer Bianca Falsetti is working with the Niagara River Region Chamber of Commerce. She intends to call bingo from the bandshell.

Two Center Street residents expressed concern over the adult nature of BB’s Bingo. Conde said he would attend and monitor the event.

•Façade changes at 335 Center St. (The Plant Shack) and 453 Center St. (Gather by Gallo restaurant). Both proposals were approved by the Historic Preservation and Planning Commission boards. Building owners are taking advantage of the Niagara County façade grant program, which provides matching funds up to $50,000.

•Former Planning Board member Savana Bevacqua was added to the Zoning Board of Appeals as an alternate member.