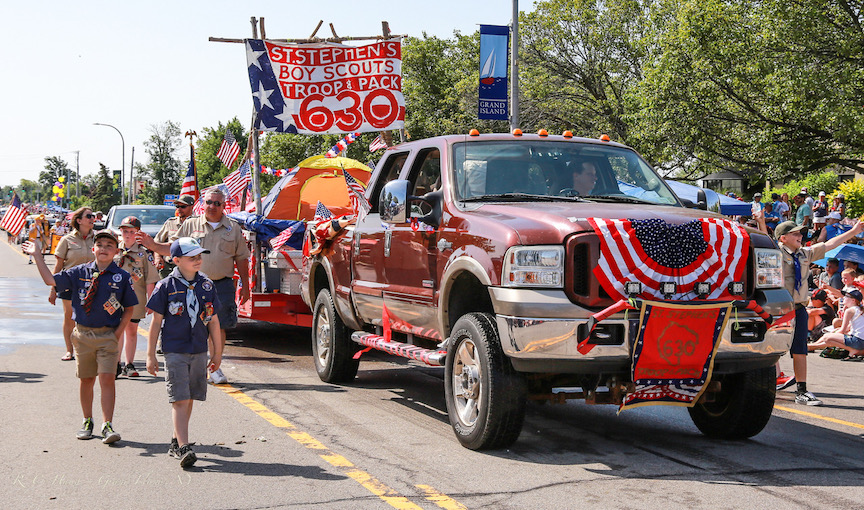 This year’s Independence Day Parade was the first year since 2019 that was planned without any COVID-19 restrictions or protocols, said Grand Island Recreation Supervisor Joe Menter.

“It was just a good, festive parade this year,” he said. Menter noted there were 60 units in the parade, including “the law enforcement escort, the Town Board and elected officials, all of our entertainment with the bands and bagpipers and twirlers, and the regulars in the parade, with the Island businesses.”

Parade participants and spectators agreed this year’s version of the parade was enjoyable.

Jessica Devlin, who was attending the parade with her husband, Al, and 4-year-old daughter, River, said, “This is our first parade. We’re loving it. It’s so much fun. Islanders do it right.”

She added she was “happy that dad got to walk in the parade with the American Legion.”

Mitch Johnson, youth director for Trinity United Methodist Church, said just prior to the start of the parade, “I am excited to see how much fun the students and kids will have today.”

Josh McConkey, who was with Johnson in the vehicle pulling Trinity’s float, said he was excited “just being in the parade itself and doing it with my church family.”

Tom Joseph, owner and operator of American School of Karate, said his group was there to march and demonstrate kicks and other karate moves. “We have some black belts to do board breaks. I am very excited. We have a wonderful country, and I am happy to celebrate our independence.”

New York State Sen. Ed Rath said, “I’ve never felt more welcome in a new community than I do today. The response has been tremendous from everyone I’ve met.”

He explained the parade was a representation of American history. “Independence Day is a reminder of how thankful we should be for the birth and history of our country, the longest-standing constitutional republic in the world. It continues to lead and set an example.”

New York State Sen. Sean Ryan said, “The parade really showcases the best of Grand Island. There are so many groups and organizations.”

She added the Grand Island parade was the first of four parades she was planning to participate in.

Dan Grasso, chief of the Erie County Sheriff's Office, said, prior to the parade, “I am looking forward to having a patriotic, sunny day, celebrating our independence and freedom. We have a large turnout today, and I am so happy to see so many young children here.”

Katie Kielaszek, cofounder and general manager of 773 North, said this was the restaurant’s “first year of doing food here” (at the VFW post at 2121 Grand Island Blvd.), but we attended many years as patrons. We’re highlighting souvlaki, along with Mama’s tuna macaroni salad. We just did ‘Taste of Relay.’ We did awesome, so we expect today to be better.” 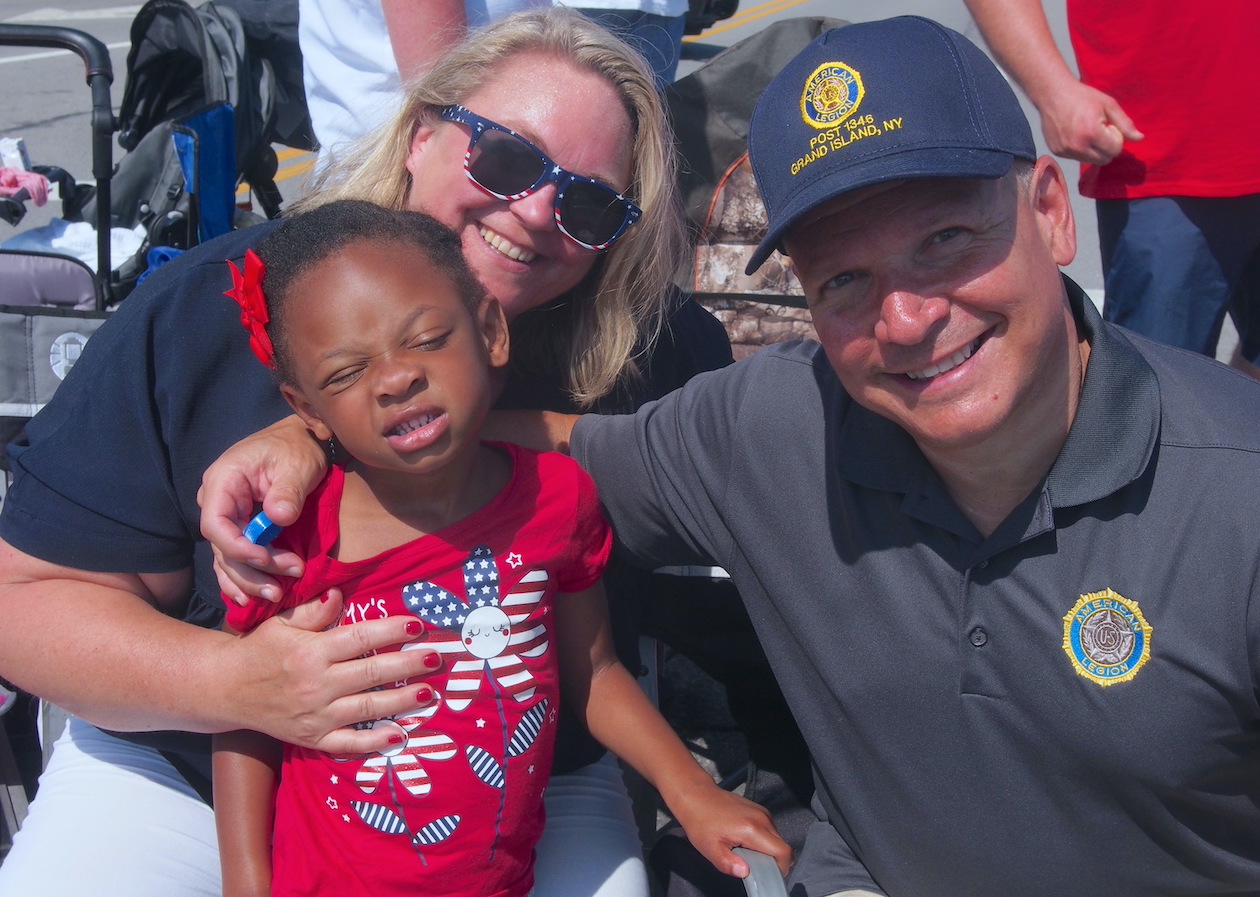 According to Menter, the turnout was estimated at 5,000 spectators and participants.

Menter said the efforts of many people went into making the parade a success. He mentioned Casella Waste System, which placed garbage bins on Grand Island Boulevard, and the Grand Island Parks Department, which was in charge of setting up the reviewing stand, putting out cones and barricades, as well as providing the gaters for the event.

“They have staff that work the day of to help with the road closures and to keep things safe and running smoothly,” Menter said.

Another person who made the parade a success was “the parade announcer, Eric Volk,” Menter said. “This was his 10th year announcing the parade. We had the Town Board proclamation at the board meeting on June 27. A big thank you to Eric. He’s been doing it for 10 years, volunteering his time to do that. As we said at the proclamation, by his own admission, he is here to announce the parade until we get rid of him, or he is here to do it forever.”

“By estimates, we had over 130 kids that participated in the kids’ run. We had 397 finishers for the 2.3-mile run, but I think we had more than that registered,” he said. “We had a nice dedication of the Rick Schmitz II water station on Webb Road.”

One of the changes that occurred this year was that people could not set up chairs and tents prior to the event. According to Menter, that rule came from the New York State Department of Transportation. He said the DOT came through in 2019 and gave the town a “stern warning” about the practice, as well as pointing out safety hazards of having chairs and tents sitting for up to a few weeks on Grand Island Boulevard.

“They raised two points: One was when you’re pulling out of intersections or pulling out of driveways along the boulevard, you can’t see. It’s a hazard,” Menter said. “The other thing they said was, with one big windstorm, the boulevard is blocked. You’ll have tents and chairs in the middle of the boulevard.”

Menter pointed out that people were bringing their tents and chairs to the boulevard as early as 12:01 a.m. July 4.

“I had people telling me that maybe a new tradition was starting, where people were getting out there earlier, making breakfast, and having coffee and maybe sitting out there,” he said. “We’re lucky that, usually on the Fourth of July, we usually have really nice hot weather. Early in the morning, it’s comfortable.”

Hopes for next year are “good weather, a fun day, and having those units. There were some units that weren’t in it last year and they weren’t in it this year. For whatever circumstances, they were unable to participate this year, but they definitely want to be kept in mind for next year,” Menter said. 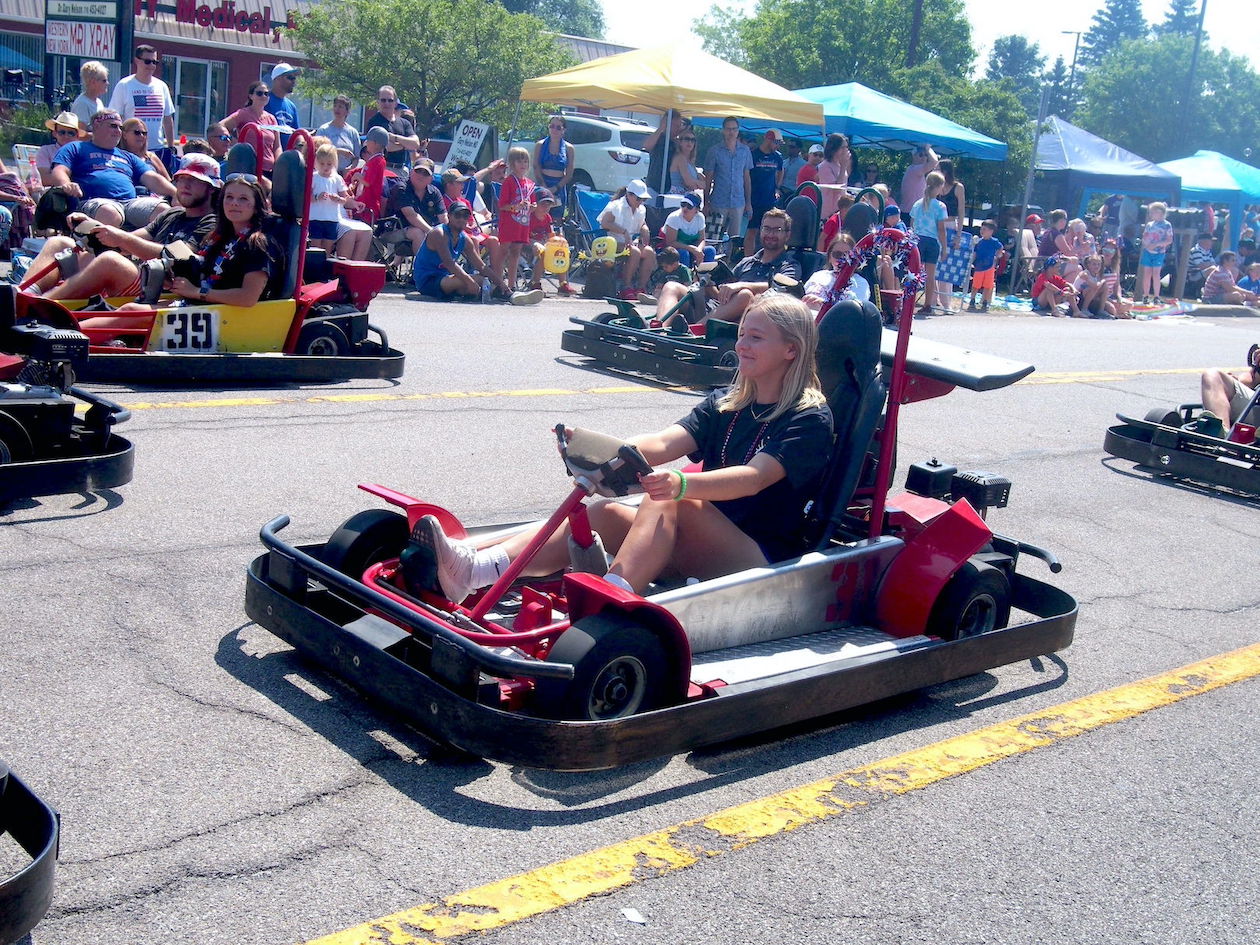 Go-karts from the Island Fun Center get on the road one day out of the year.