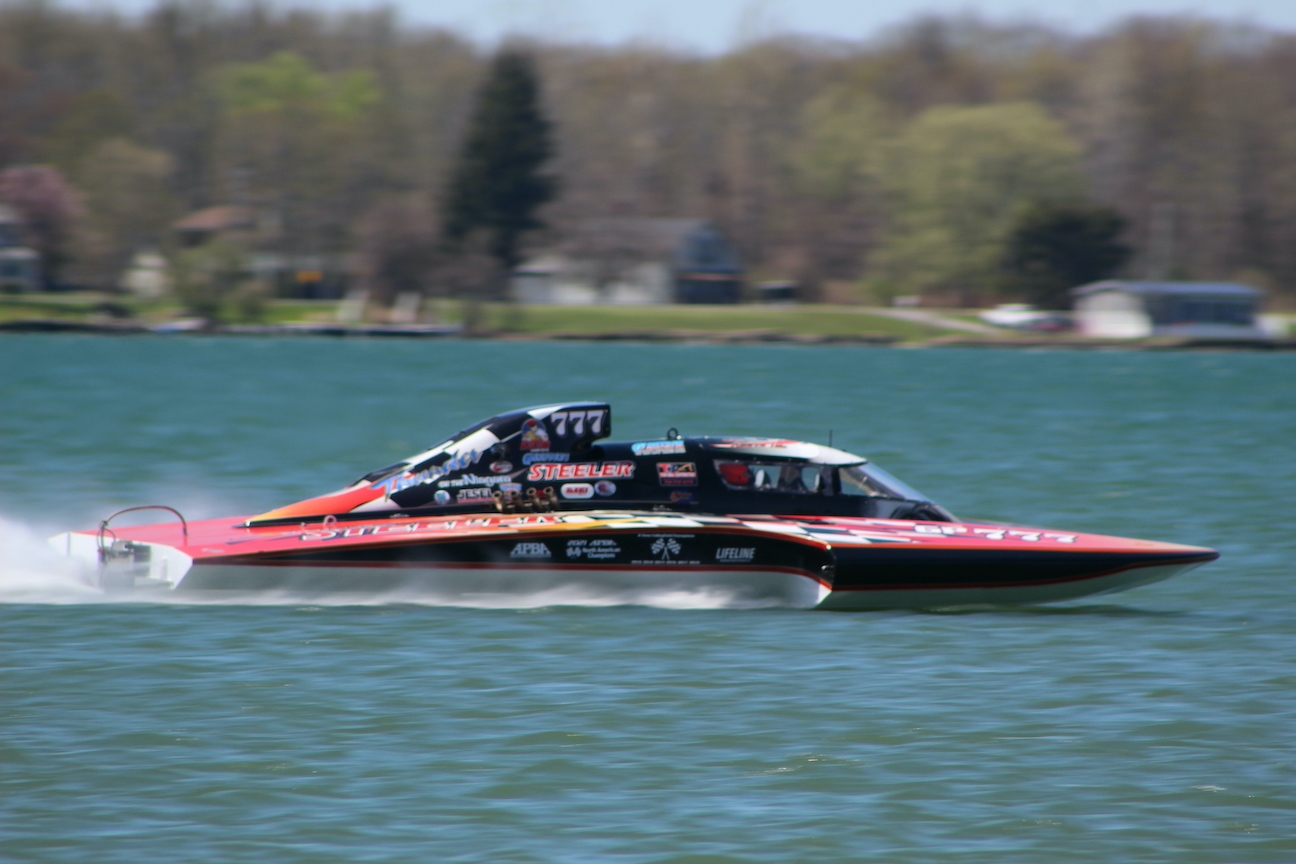 Matching the power of Niagara: Hydroplanes take to the water for first run of season

Story and Photos by Nathan Keefe

Ladies and gentlemen, please start your engines, as the 2022 season for hydroplanes kicks off at Gratwick Riverside Park in Tonawanda.

Grand Island native Ken Brodie II, along with colleagues Bobby King and Andrew Tate, all decided to test their hydroplanes to prepare for the 2022 hydroplane racing season, on Saturday, May 7, at the waterfront park.

Brodie, who drives the GP-50, said, “It’s like flying on a magic carpet,” when asked about what it was like to pilot a hydroplane. “There’s nothing really like it. It’s kind of like being in an F-1 car, except every time you make another lap, the track is different. It’s water, so it’s always changing. You know, you’re behind some guy’s ‘roostertail,’ sometimes you’re out front. It’s quite a bit different than a car, but it’s a great feeling.”

Many think of hydroplane racing as an adrenaline sport, with its thrills and excitement.

“You know, everybody says that,” Brodie explained. “It’s designed to be on the water. For us, we race against each other. We’re here testing to go to a race in two weeks. I try and go as fast as I possibly can to stay out front. It’s competition we have here. You’ve got to work pretty hard for it.”

He said, “Today was more of a safe test for being off for almost two years. We wanted to put everything back together, get out on the water, make some laps. Now we’ll go back to the shop, read some data, look on the computer, see how everything looks, and then get ready to race it in two weeks.”

Tate, of Michigan, piloted the GP-777 Steeler. He explained it's the closest he'll get to flying when he's out on the water.

“The Niagara River’s always a challenge,” he said on the windy morning that greeted the racers. “It’s definitely rough. Today, it’s 20 mph winds – makes it even more interesting.”

Tate said when you get out on the water, the adrenaline is definitely flowing.

His biography on the Hydroplane Racing League website notes, “As a fourth-generation driver, boat racing is part of his DNA.” His great-grandfather, grandfather, father and mother all raced hydroplanes. Tate won the Best Start in a Superior Class Award in 2015, as he was debuting in the Grand Prix class.

Eleven-year veteran King, also of Michigan, who operates a 5-liter hydroplane, explained weather has a lot to do with how the boats run out on the water. The speed trials Saturday went right up against those 20-mph winds.

“Well, today is going to be a rough,” King said. “It’s just nice to get out here to Tonawanda, do some early-season testing.”

He said the next stop on the circuit is a race in New Jersey. “It’s always good to get a couple laps in before you get a bunch of other guys around you.”

King said his boat is an E-350 hydroplane, powered by a Chevy 350 small-block engine that puts out 400 horsepower and will do speeds of about 120 mph. In 2019, King was named Driver of the Year by the Hydroplane Racing League

Mike Geblein, a boat builder and crewmember for the Steeler, said the boats racing on Saturday weigh about 3,000 pounds. They have 1,500 horsepower with big-block engines and run four laps, side by side, at over 150 mph. The Steeler still holds the world record, he said, set in Waterford, Michigan, for achieving a speed between 175 and 180 mph.

The hydroplanes kick up a distinctive “roostertail” behind the boat, raising tons of water into the air.

After the test run, Geblein said the Steeler, at one point, did hit 179 mph.

“Thunder on the Niagara” is the big event this summer for hydroplane enthusiasts. It’s coming Aug. 6 and 7 to Gratwick Park, and organizers say it is home of the largest hydroplane races in New York. Geblein said the event, sponsored by the Niagara Frontier Boat Racing Association, is a memorial to local boat racers Ken Brodie Sr. and Mike Endres, who both passed away during the coronavirus pandemic.

Next up for the hydroplane racers in the American Power Boat Association is the New Jersey Governor’s Cup race, Saturday and Sunday, May 14 and 15, in Landing, New Jersey, on Lake Hopatcong. 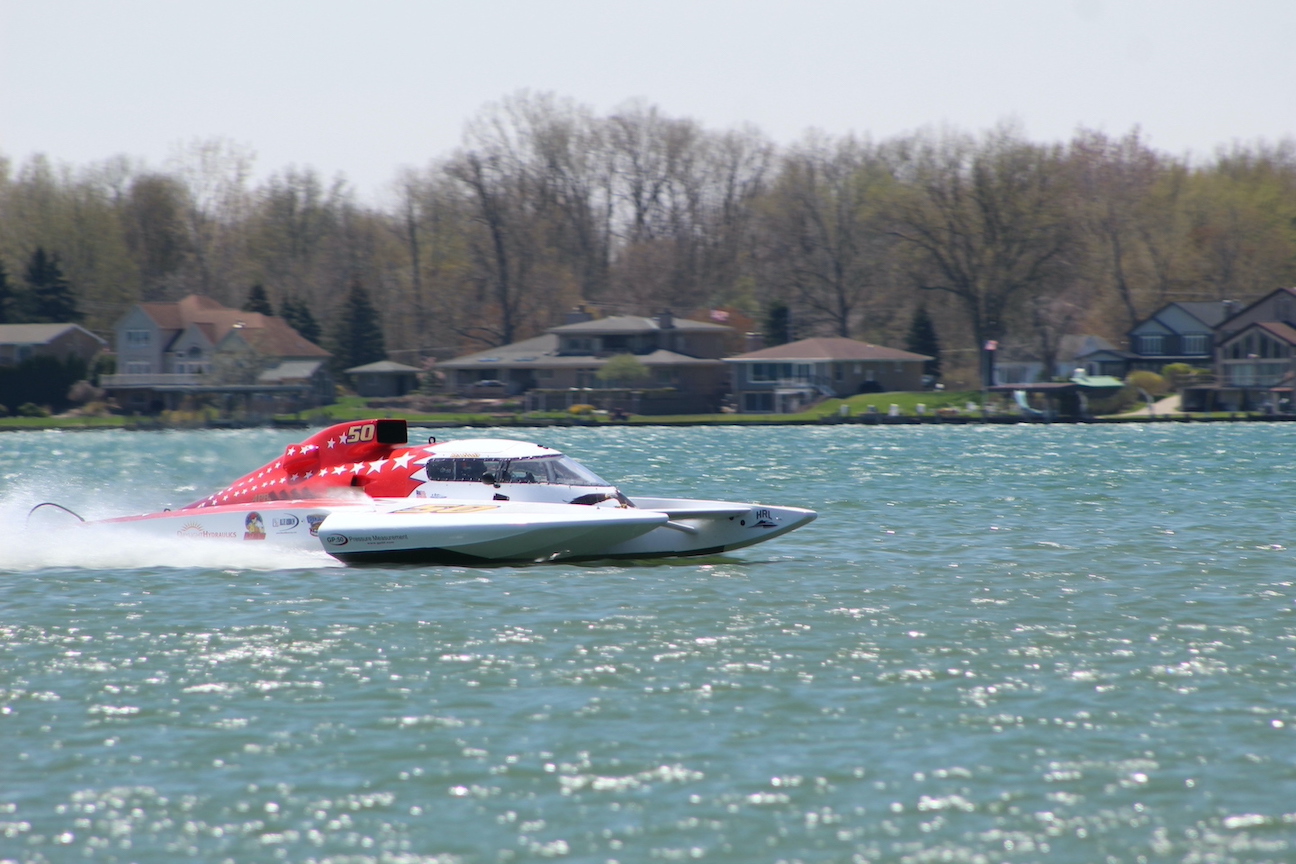 Ken Brodie tests out the speed of his hydroplane on the Niagara River on Saturday.