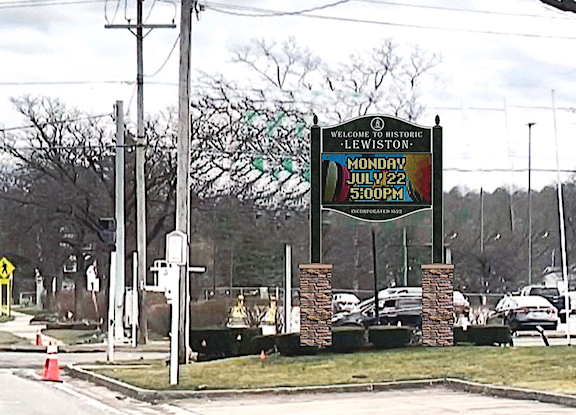 The iconic white letterboard sign at the Center Street and Portage Road corner of Academy Park met its demise a few weeks ago. A windstorm rendered what was left of the marker unusable.

Still, “We get so many people who request use of it,” Clerk Shannon Fundis said.

Though these callers don’t know the placard is gone, they do know signage at that corner served as effective marketing to passersby.

Such is the thought behind the Village of Lewiston’s interest in adding a digital sign to this spot.

At Monday’s Historic Preservation Commission and Planning Board meetings, Mayor Anne Welch said, “We need a sign, and our (Department of Public Works) guys can't go up and put letters on a sign board anymore. …

“We have a lot of events, festivals. A lot going on. We could use the sign for AMBER Alerts or emergencies or whatever. And the communities around us, they all have that digital sign now – and we're like the last one to get one. So, I think it's needed.”

She acknowledged a digital sign isn’t a textbook fit for a historic community, but noted, “We're trying to match the pillars in Academy Park to make it look similar.”

“This is not a digital where you’re going to see it revolving This is just a sign. It's not like it's going to be blinking or rotating or revolving – whatever. And like I say, in emergencies, even (DPW Superintendent) Larry (Wills) can program from his phone to that sign to say, ‘Water break on such and such an area’; ‘Detour on such and such a street’; AMBER Alerts; senior alerts.”

As an added bonus, Welch said, “We are taking that great big, huge sign down right next to the chamber office – that ‘Historic Lewiston’ that we put up years ago over the back of the DOT sign. The DOT sign is coming down also.”

It’s unknown what the final dimensions of the digital sign will be, but the marker will be at least 8 feet off the ground. Shown in the Cooper Sign Co. rendering is stone footers encasing two poles. The screen is outlined by a solid frame material that reads “Welcome to Historic Lewiston” and “Incorporated 1822.”

“It's a community billboard,” Welch said. She explained event organizers and nonprofits could advertise on the sign for free.

An initial cost for a lower-level sign adjacent to the Niagara River Region Chamber of Commerce was estimated to be around $57,000. Welch said funding would come from the purchase of the “Big Yellow House,” property the municipality is selling on Ridge Street.

Welch said, “We were going to put (the sign) on that Ninth Street and Center Street corner, but then we looked at it and we thought it's better to go back where the other sign was, near Portage Road. And we have to have it high enough, because the cars park along there. So, it has to be up where you can see it.”

HPC member Peter Coppins said, “I personally think that is a better location. There’s more time for people to see the sign, as opposed to the crazy (intersection at Center and Ninth streets), where people are in a hurry to get where they’re going.”

HPC Chairwoman Loretta Frankovitch said, “I have been contacted by several members of the community who are not interested in the sign.”

Over the years, many event planners paid to place banners under the sign board, opting for a more colorful display.

Welch said the old sign was problematic in that pieces and letters were missing, and any update required DPW workers to climb a 10-foot ladder.

Frankovitch said, “Nobody has any problem getting rid of that. The question is whether to add something else to the village. Information that can be readily found online or on your phone.”

Welch said, “They can do that, but I still think a sign is needed.”

Frankovitch said, “I'm just going to share some other comments that I received: That it was very, very large; that it's digital, which doesn't really fit into the historic nature of our village. Somebody asked me what value is it bringing to the village – what is it adding to our village that, again, people can't find out by looking on their phone, or looking somewhere on the website. There's the Sentinel.”

HPC member Jim Fittante said a digital sign would “more or less replace the taking up and down, and putting all the different banners up. You’ll save liability with workers going and doing it.”

“Right, and the girls can program it in the office,” Welch said.

HPC member David Giusiana said, “The advantage to this, in lieu of the banners – the farmers market suffers that, for a few events, the farmers market sign has got to come down so these other events can come on. But with this one, they can live there and share the space.”

The Planning Board didn’t vote on the sign, but offered an opinion

Chairman Norm Machelor said, “We are in favor of a sign,” but noted the board wants to see final dimensions.

Welch said, “When we get the other information from Cooper, we'll send it off to you, so you can get a better idea. They're going to superimpose it where we want it, on the corner of Portage and Center, so you can kind of get an idea how big it's going to look.”