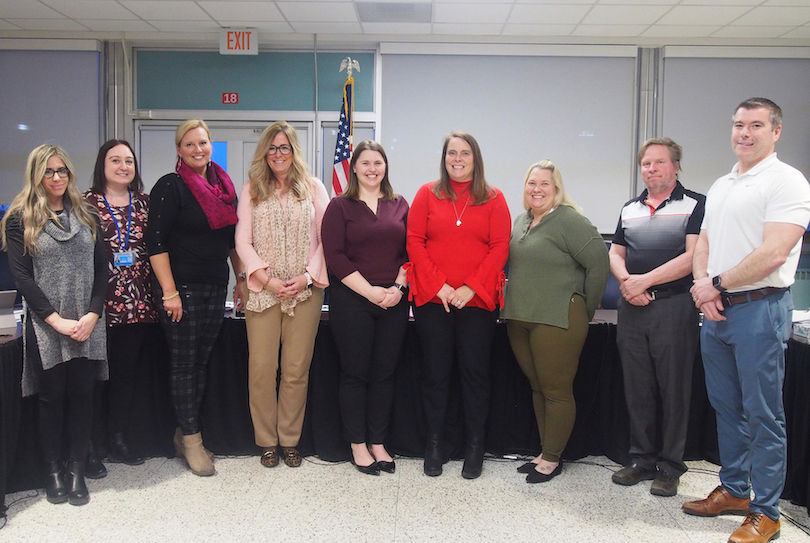 The Western New York Educational Services Council has named its award winners, which include Amy Boutet (high school business teacher), Assistant Superintendent for Pupil and Personnel Services Cheryl Cardone, and School Board Vice President Sue Marston. They are photographed with the School Board. In addition, Daneen Gallagher, who was not present, was recognized with the Strength, Optimism, Aspiration and Resilience (SOAR) Award. She is the president and co-founder of Kids Event Tickets, a "nonprofit that distributes sporting and cultural event tickets, free of charge, to underserved children and teens. They help children experience culture and entertainment that abounds in their very own communities."

Budget issues presented at Grand Island Board of Education meeting

As of April 4, New York State’s budget had not yet been passed. At the Grand Island Central School District Board of Education meeting on that date, Dr. Rubie Harris, assistant superintendent of budget and finance, said, “We’re confident that the aid that was allocated in the January funds is what we will receive. We’ll be blessed if we receive more than that. We don’t expect it to be less.”

Harris said the school district is set to receive $1.1 million in foundation aid. “That is great. Truthfully, if we had been funded correctly this year, we would have received an additional million on top of that. So, the makeup (of funds) is a makeup of formula that they should have run years ago. And they are finally phasing it in to make us whole.”

In addition to New York state foundation aid, the school district anticipates receiving funding from the American Rescue Plan. The purpose of the Elementary and Secondary School Emergency Relief Fund, according to the New York State Division of the Budget, “is to help schools safely reopen for in-person instruction, address learning loss, and respond to students’ academic, social and emotional needs, due to the disruptions of the COVID-19 pandemic.” This funding source will be available for use over multiple years.

Both Harris and Superintendent Dr. Brian Graham discussed staffing needs, as well as anticipated retirements. According to Graham, 11 teachers have indicated they intend to retire at the end of the school year.

Enrollment in the school system has been fairly steady, Graham said. He explained it is anticipated there will be 230 children enrolled in kindergarten for the 2022-23 school year. Currently, there are 10 kindergarten teachers and 10 first grade teachers at Sidway Elementary School. Class sizes are at 20 for both kindergarten and first grade.

The number of teachers in all of Grand Island’s schools is expected to remain the same, except for the high school and Kaegebein Elementary School, which currently has 16 classroom teachers.

“The school district is requesting that change to 17,” Graham said.

The high school’s change would be a decrease, as one of the 11 science teachers is set to retire.

“We should be able to fill the course requests with 10 teachers,” Graham said.

Other requests for new instructional staff include another English as a new language teacher, a social worker, a speech teacher, an elementary teacher, and turning the part-time elementary strings/orchestra teacher into a full-time position.

“I did think that was important just to share, to show where we are estimated to come in right now,” Harris said.

The Board of Education is expected to adopt the budget during its April 19 meeting.

Another issue that was discussed at the board meeting was the possibility of the state asking school districts to purchase electric buses.

“It really needs a lot of conversation and discussion, because there are so many elements I don’t think have been thoroughly thought out as it relates to switching over your entire fleet to electric vehicles,” Graham said.

“There are financial challenges with doing it,” Harris said. “There’s the cost of the actual bus, charging stations. Is the state going to aid infrastructure to cover those buses because it’s not aided now? How far can they go? Do they need to be charged again?”

In addition, there was discussion about installing vaping detectors in the high school. The school would require 22 detectors to cover all of the bathrooms.

According to Grand Island High School Principal Roger Broeker, these detectors are in place in other school districts, including Maryvale and Springville-Holland. He described the detectors as “another added layer of deterrence for students.”

“All schools use a mix of real and dummy units throughout the building. They’ve created discipline teams to help address all of the alerts,” Broeker said.

Currently, Broeker said, staff monitors the bathrooms for use of vaping devices. He said toilets have been clogged because students flushed the devices to avoid getting caught.

“I would rather if they wanted to throw them out and not get caught to put them in the garbage,” Broeker said.

School Board members questioned the cost of the system, which comes in at $1,250 per device, or $27,500 for 22 units. Broeker said he plans on talking with larger school systems – with 1,000 or more students – that have the detectors “to see how it works in a school with multiple bathrooms.”

Graham said he would look for an update on the issue of vaping detectors in a month.

In addition, the school district will hold a screening of a documentary about social media and a healthy life balance at 6:30 p.m. May 4 at the high school. It will be a community event, and all are welcome to attend. The Grand Island Chamber of Commerce and local businesses will partner with the school district in presenting this program. The documentary will be shown again during school hours for both high school and middle school students.