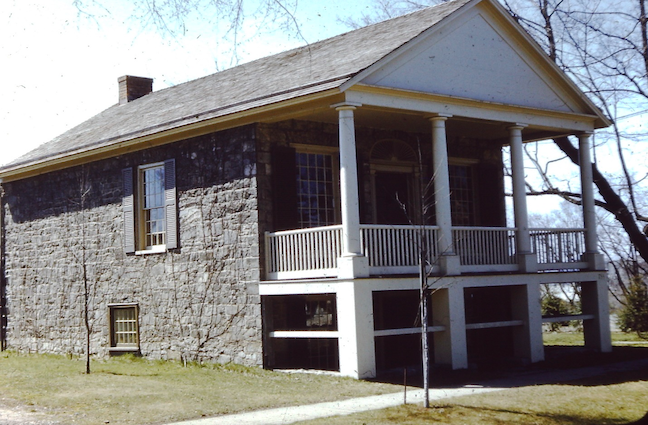 This is a view of the Stone House just prior to renovations completed by the current owners.

Counting down to Lewiston's bicentennial: Stone House has storied history

Welcome back to our eighth bicentennial building in the series, the great old building at 755 Center St., today known as the Stone House pub. This is one of Lewiston’s premiere summer venues for fun and frolic. Currently, it is owned and operated by Emery Simon and family.

The Stone House is always hopping in the summertime, and its over-200-year-old history makes it an even more attractive venue. That history starts with Bates Cooke, who built it in 1820 as his law office.

Bates Cooke was one of the first lawyers in Lewiston, but his reach extended far outside the town. He became a New York state comptroller, meaning he examined and certified the expenditures of the state. His success in politics would also lead him to become a congressional representative.

Cook showed his courage and grit locally in an unexpected way when the British came in 1813 to burn down Lewiston. The story goes that, when the Native Americans working for the British were chasing down the fleeing citizens, Bates got out his brother Lothrop’s gun, which had one bullet in it. When he fired and killed a particularly fierce warrior, the remaining attacking warriors were temporarily stunned and everyone was able to increase the gap and make good their escape.

The Tuscarora allies that heard the gunfire were able to join the defense, and the poorly dressed and panicked citizens hurried away. If Bates Cooke hadn’t shown such heroism, many more pioneers of Lewiston may have been lost to history.

This unique marketing attempt stuck in the minds of the people who enjoyed the building and its services. However, the building lost much of its appeal in the 1920s when it was remodeled to be a private dwelling, and they enclosed the entire building in wood and shingles.

Luckily, Mr. and Mrs. Klaussen, notable Norwegian residents of the community, bought the house in 1950 and restored it. Thanks to them, the beautiful columns in the front contain much of the design and material as the original. The building has gone through many hands: It has been a law office, a school, a private residence, a beauty parlor, an art gallery.

The next time you visit, be certain to appreciate its history and importance to the community of Lewiston.

On Sunday, July 3, Academy Park will see a morning yoga session. Also in the morning, there will be a lower landing historical tour in Artpark. At 1 p.m. that day, the Potter’s Field Monument dedication will happen in the Village Cemetery behind the Old Stone Church on Fifth Street. This is a project led by Lewiston’s historian, Russ Piper, and has been a labor of love. Please plan on attending, for certain.

There are many activities planned. To see who is involved and to learn about sponsorship opportunities, please visit www.Lewiston200.org.