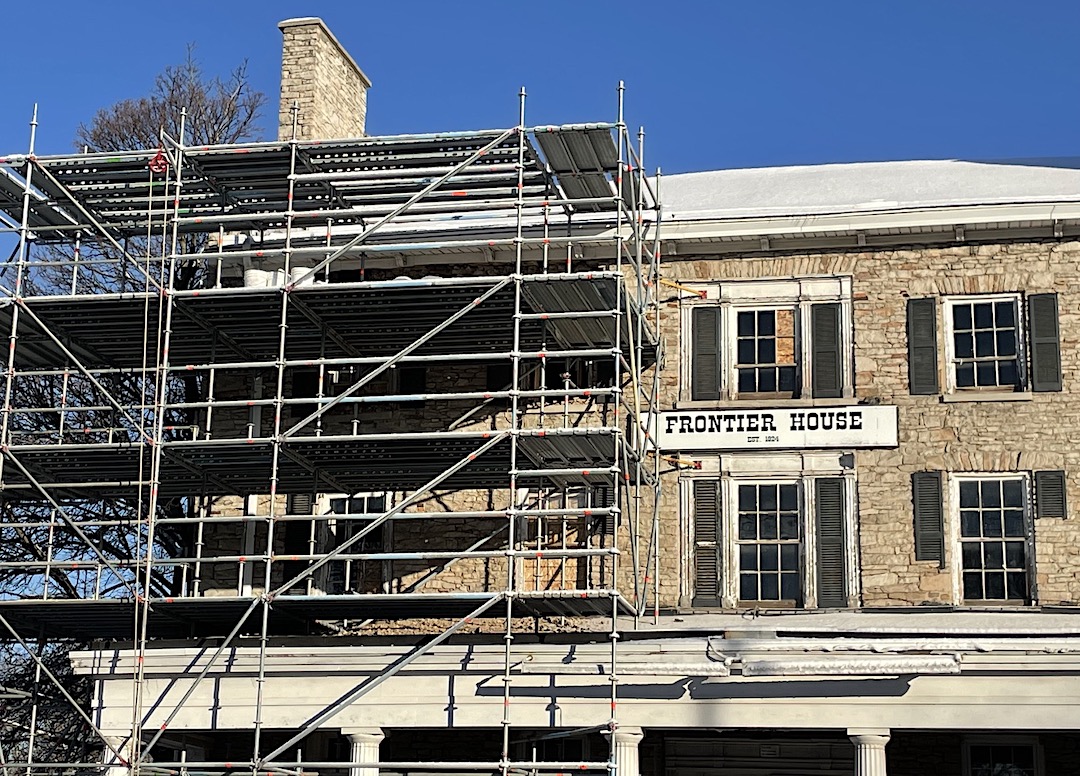 Pre- and post-snowstorm, construction crews have diligently worked to repair the exterior of the Frontier House in Lewiston.

√ Timeline for reopening moves to early 2023

Article and Photos by Joshua Maloni

Most of the repair work at the Frontier House in the past 10 years has been performed behind the scenes, revealed only through second-hand accounts. But in recent weeks, exterior work has been readily evident and on display for all to see, with massive lifts, scaffolding and tarps surrounding the 198-year-old building.

Though Grand Island’s Abraxas Inc. began repointing and replacing mortar in December 2020, this three-month stretch has produced the most activity seen at the Center Street site since the property was purchased Feb. 12, 2019, by Ellicott Development CEO Bill Paladino and Lewiston developers Bill Game and brothers Jerry and Jeff Williams.

“I'm so excited to see it's finally really moving. And I stopped to talk to the contractors there the other day, and he said they had probably 60% or better of the mortaring done. And like I said, then once they get the outside done like that, they're going to start moving on the inside.

“I think everybody is so happy to finally see something happening with that building.” 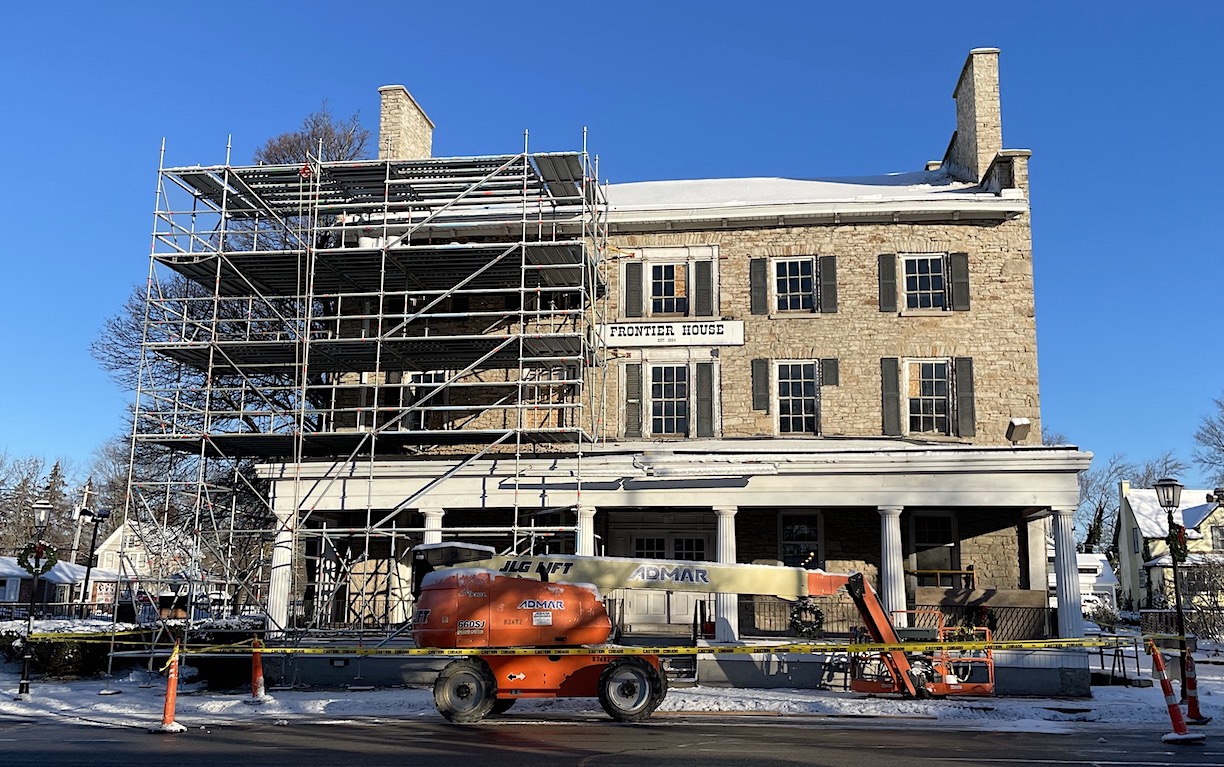 Ellicott Development Director of Development Thomas Fox said what onlookers have seen is “all masonry restoration work. Some repointing work; some reconstruction work; there were some issues structurally with the front façade that we're working on repairing before we can get to the inside and do a lot of that major work.”

A window above the former McDonald’s Restaurant drive-thru window also was boarded up.

Fox noted, “We're planning to keep everything intact as it is. There's some front façade removal replacement that's happening right now. But that would all be in kind of historic, original look and character of it. The front and the rear building are just being retrofitted on the inside. There's no major removal of any network.”

Architect Jim Fittante of Fittante Architecture said, “It's all the cracked mortar, everything that's fallen out through the years, in between the stone. Where the scaffolding is now was probably the worst part, where the actual wall was actually bowing out a little bit. So, in that upper section on the front, I know that they're actually taking down a few feet of the stone and rebuilding it back up.” 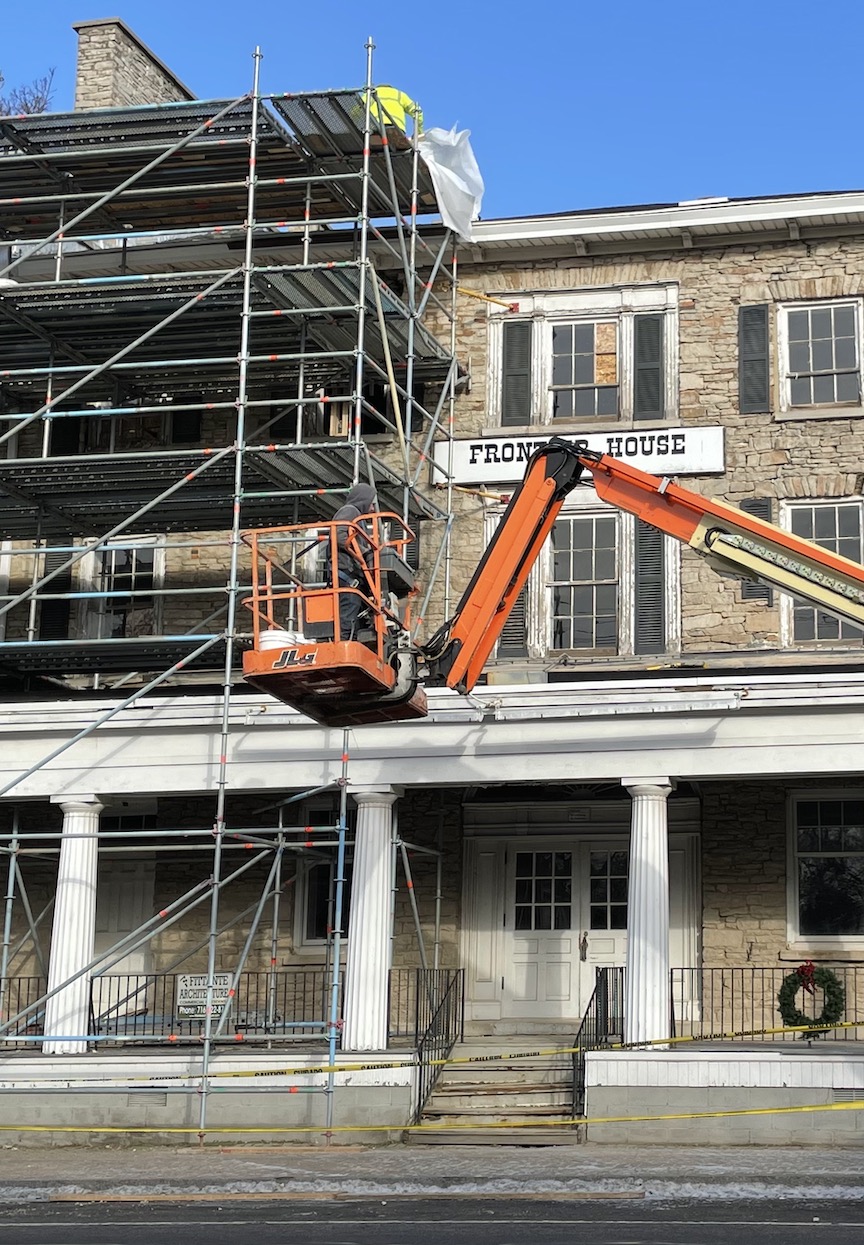 Welch said, “I have had conversations with Bill and he told me, come January, he was going to start really pouring the coals to it. And he was true to his word. They've been working every day there. I think it's going to be great if they can do the original thought of the boutique hotel, where people can actually go inside it and see what it's like. I'm hoping that the public will be able to see everything that they're doing there.”

Last September, Fox said the plan was to create 11 units spread across the second, third and fourth floors: “We can do a longer-term rental on the units, or we can do shorter-term rental – be it a bed and breakfast or something like that. …

On Monday, Fox said, “That's still the program. It's a mix of those two. Again, we may be adding a few additional units in the lower level, being the first floor and the rear. But we're looking at a couple flex options with that, between additional residential – two to three units potentially – and retaining that as commercial space.”

He added, “If we do have the residential there, that'll probably take about half of the first-floor footage. But we would still, at least in a case where we end up with some residential on one, we probably still end up with at least, again, half of that first floor – at a minimum – and then portions of the basement, potentially, as retail/restaurant-type space.”

Regarding the rathskeller, Fox said, “We're studying some accessibility issues at this time with the architect, some different options with that, as we have kept some of our plans in terms of access to the basement and flex. We’re working through some of those details right now, looking at what code requires in terms of that access, and going to make some decisions on that soon.

“And we've had quite a bit of interest, too, in that retail/restaurant-type space, so we're hoping to kind of wrap up that interest and those code questions soon.” 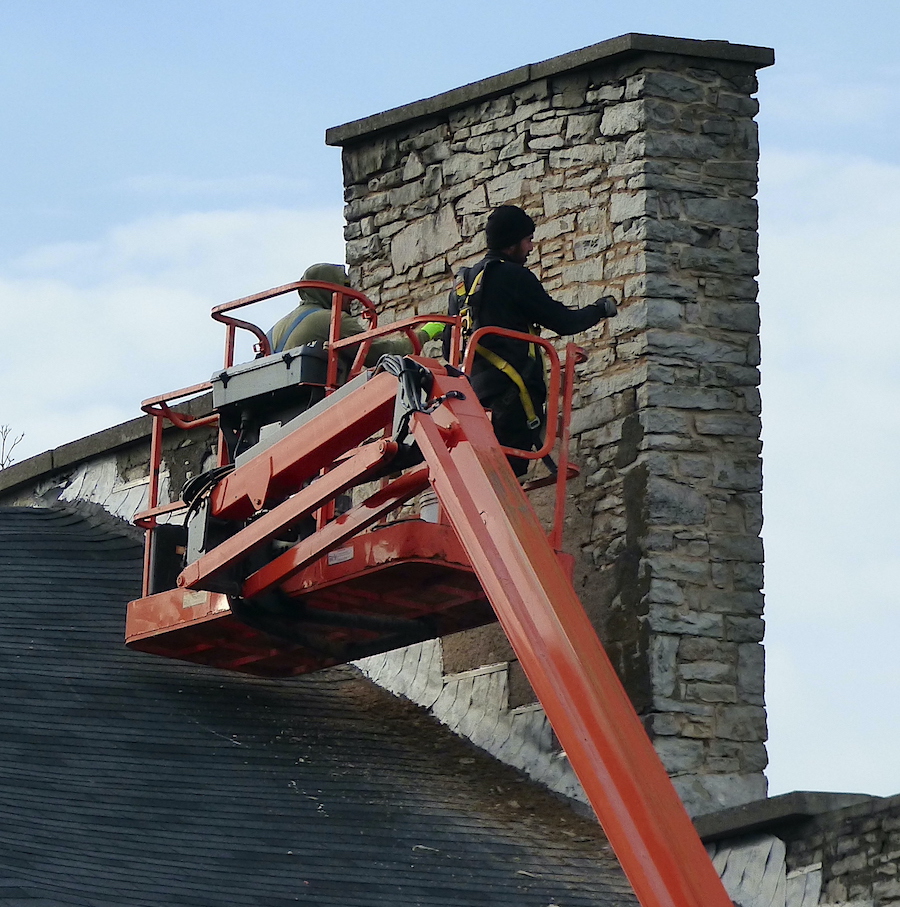 In his original interview, Fox explained the restoration project was slowed in part by the coronavirus pandemic, and in part because it would take time to receive renovation approval from the New York State Historic Preservation Office. The Frontier House is designated on state and national historic registers, meaning exterior adjustments are required to be in keeping with the property’s historic look and character.

“It’s gone through SHPO at this point – it has their approval,” Fox said this week. “It’s off at national parks now. We’re waiting for their final review and approval.”

That could arrive as soon as mid- to late-February.

Fittante said SHPO is “very pleased. They love seeing an owner take on the restoration of these older buildings.”

“Everybody's benefiting from it,” he added. “We're getting back a historical building. And we're meeting all the guidelines. So, it's a good historical restoration of a great building that’s in Lewiston.” 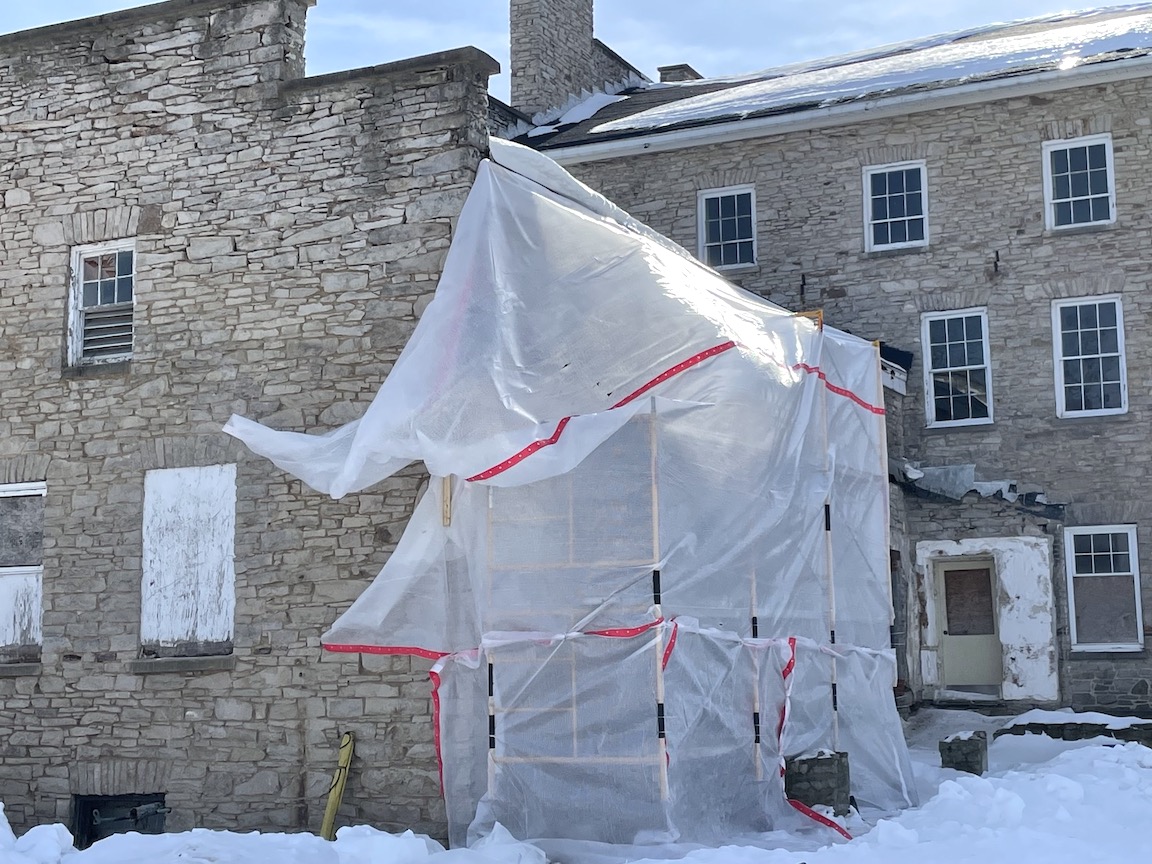 As winter turns to spring, “We’re pretty much final on our floor plans that we're going to be moving forward with, so I mean, it's really just getting in the building construction drawings to the village, so that they can start the buildout of the interior,” Fittante said.

He explained the next phase – though of paramount importance – won’t quite be as exciting to watch.

“Now it's probably going to be just seeing a lot of materials come in and storing on site, and then a lot of the people probably won't see a lot of the work going on, because now it's going to move to the interior,” Fittante said. “But it's always good to see that exterior work getting done. I've been around in the repointing of an old historical structure. It takes a lot of work and someone who knows what they're doing, and they're doing a good job doing it.”

Fox indicated the main interior renovations would begin this summer. He acknowledged the timeline has been pushed back a little bit, and that the Frontier House likely won’t reopen to the public until early 2023.

“There's been great anticipation,” he said. “From every indication, we've seen great response and great reception to both the plan and what we're planning to do and looking to with the property. Obviously, many of the locals have the Frontier House close to their heart, and want to see a reuse that is in keeping with the history of the building – which is what we're doing.”

Welch said, “My one big thing was to take care of that Frontier House, and it was very hard going through COVID, and everybody saying, ‘Well, now it's just sitting there again.’ I had all the faith in the world in Bill, and we just had to ride out the COVID. He had a lot of projects that he had to take care of in Buffalo, and his other properties. So, I mean, it wasn't an easy thing to do, to start a brand-new project when he had other ones that were on hold.

“I have all the faith in the world in Bill. He’s a good guy and he's true to his word. He’s going to finish that project the way he said he would.

“I'm just excited to see it. I hope it’s sooner than later.” 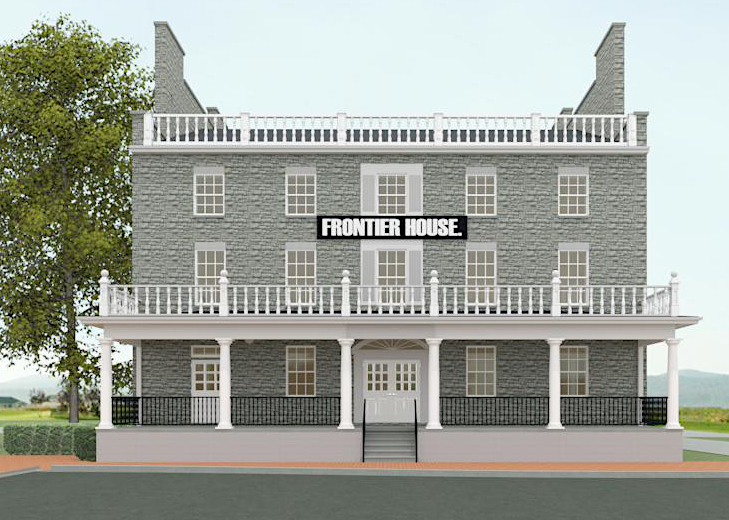 This is the intended final version of the Frontier House in Lewiston. The rendering is courtesy of Fittante Architecture. (Note: Color is shown to enhance the image, and does not suggest a new paint job.)