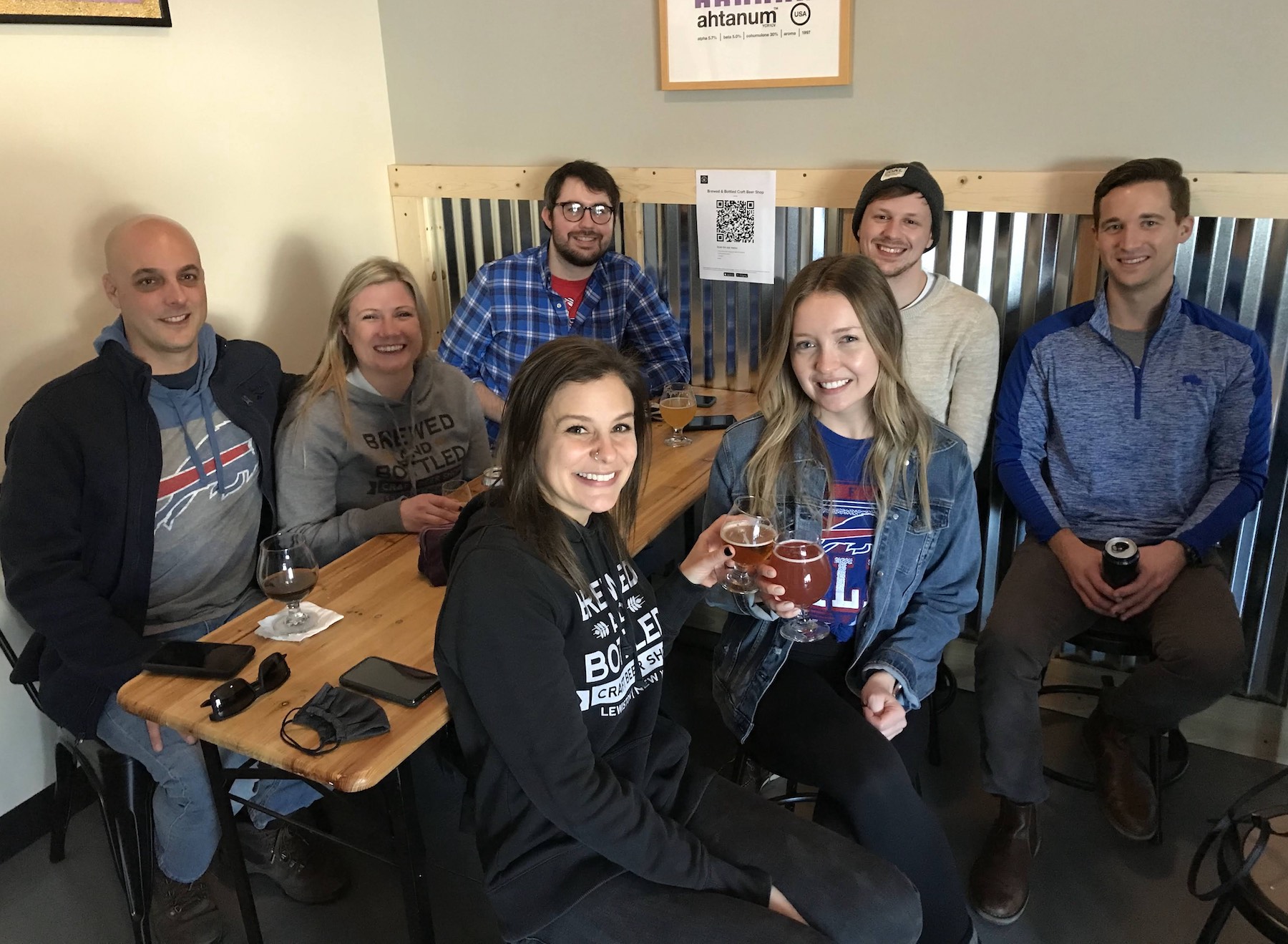 Of course there would be a snowstorm.

It was only fitting that, after two years waiting to reopen Brewed & Bottled Craft Beer Shop, owner Chris Budde watched as nearly 2 feet of snow landed on Lewiston just three days after he welcomed customers back.

Construction. COVID. Supply chain. What was one more challenge?

Fortunately, this one came with a pleasant surprise.

“It's funny – it just seemed like kind of fate, right?” Budde said. “But I think the good thing about it is the snow, actually, I think it helped us have a really busier first weekend than we expected because, you know, in Western New York, everybody's got to go out and get their beer for the snow. So, we saw a lot of packaged to go, and I really didn't expect that this weekend – for people storm-prepping.”

Budde noted, “We quietly opened on Friday, and we didn't really tell many people; and more people showed up than we thought because everybody started telling their friends. And then it was Saturday. Saturday, we opened the doors and we told people we were there.” 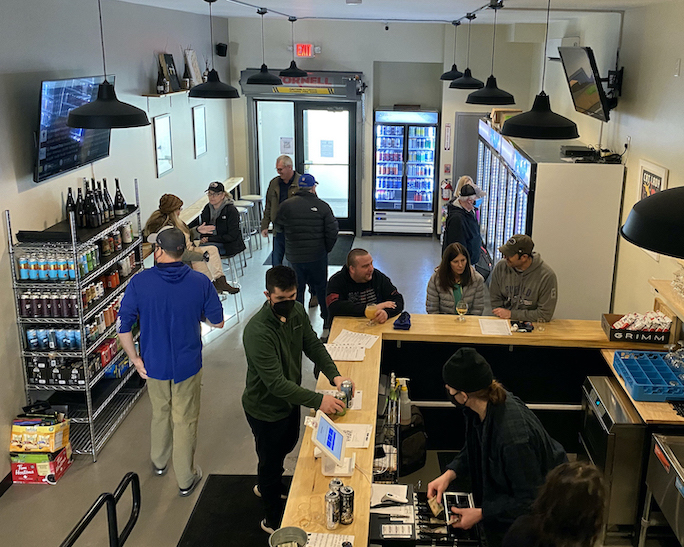 For those new to Lewiston, he explained, “We are a beer shop and beer bar. People can buy anything as a single or pack to take home, drink from 16 taps on site, or open any can/bottle, or take a 32-ounce crowler can home. We have many events, exclusive beer releases, and hard-to-find beers. We focus on freshness of product over the amount of product – too many places buy everything and it sits only to get old – beer should be experienced as fresh as possible.”

Brewed & Bottled was previously located at the corner of Center and North Fourth streets. That property is now Gallo Coal Fire Kitchen and Gallo Pronto.

“I would also say I really enjoy our neighbors – all of them. I like being next door to Battle Flag. I love being next door to Sgt. Peppers; and it's great to have Mad Hatter there. We complement each other,” Budde said. “Having neighbors that are on the same wavelength as we are with creativity and craft beverages or craft foods, it's really great. Everybody's just so positive in that building, and we want each other to succeed.” 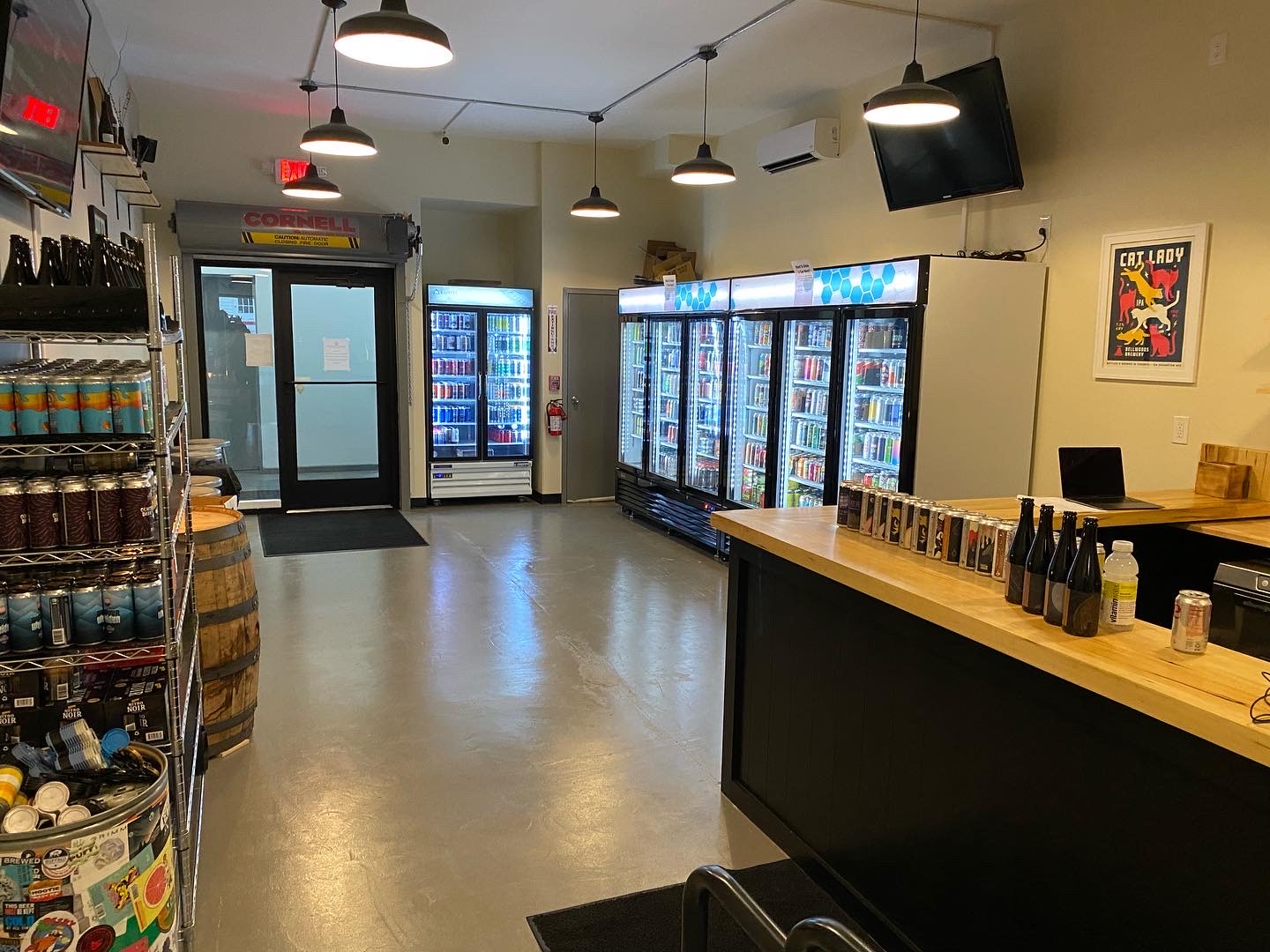 Pictured is the inside of Brewed & Bottled Craft Beer Shop, courtesy of owner Chris Budde.

Speaking of his new digs, Budde said, “People love the new space. We used a lot of the same artwork from the old Brewed & Bottled, and we even kind of placed everything together how it was in the old location. And people walk in and they're like, ‘Wow, this is a new space. It's a newly designed new building, but it feels just like home. It feels like the old place; it looks like the old place.’

“We're getting a lot of positive feedback about that. It seems like just a wave of nostalgia is hitting everybody.”

And, sure, the past was great, but Budde is equally amped about his new amenities.

“I really enjoy the fact that we've got the outdoor seating in the backyard,” he said. “I think it's kind of private and a little more quiet than being out on Center Street. And once the snow melts and it warms up, people will be able to enjoy that back there.

“I definitely enjoy having a separate back room fully dedicated to seating. I think that makes it a little more comfortable for people to hang out without having to be amongst the retail shelves and coolers. It just kind of chills it down even more than it was before.

“Having all the retail up in the front, it makes it great because people can kind of come in and get their stuff and leave without having to navigate through all the people who are hanging out.”

Two years away from the serving counter, Budde joked, “I'm a little out of shape because I haven't done it for a while – but it feels great.”

That time away gave Budde ample opportunity to make plans for future success.

“We've already talked to Phil and Tracey over at Battle Flag about doing some collaborative events, where maybe you go to their place and you get to drink a cocktail version of a beer style that then we will serve at our place,” he said. “We're not licensed to have beverages go between us. They're all liquor, and we're just beer, wine and cider. But we discussed a lot of really cool collaborative events like that. I don't want to give too many details away. But just working together, give people a little bit of a different taste of each beverage, but sort of the same style, if that makes sense.

“Of course, Neil is always going to have all of his snacks, and we've kind of dedicated him as the snack area. People have been wandering over there and getting all their cheeses and getting all their bagged chips or bag snacks, and it's just great to be able to have him push his products in our store. And Barb, we've talked about some events for fundraising together.

“Being up the street, we have more eyes on the building, which is great. We loved our old location, but we've noticed that being next door to Brickyard, and being in that general zone there, you've got more people who walk by and look at the building. And I think, once our signs are up and it warms up outside, it's going to give us more potential for brand-new customers.”

Hours of operation at Brewed & Bottled will vary to start.

“I tell people to check out our social media for the time being,” Budde said. “We have a mostly brand-new team, and I'm very rusty having not been at it for two years. So, we're sort of taking the next few weeks as they come, and we're posting either daily hours on our Instagram and Facebook, or we're posting them in chunks. So, for the next couple of weeks, you can expect some little minor tweaks and changes in the hours here and there. But we will be, for the time being, seven days a week.”

Once inside, customers can expect to find their favorite beers, plus “We did get our hands on some exclusive beers that you only find in a couple places in Buffalo,” Budde said. “There's a brewery called Mortalis, and I've been trying for years – as with many other people – to get their beers. And they replied to me and said, ‘Yeah, absolutely; we'll sell to you.’ So, we're one of two or three places in the entire Western New York Region to get their beers in cans. So, that's an awesome, awesome thing for us.” 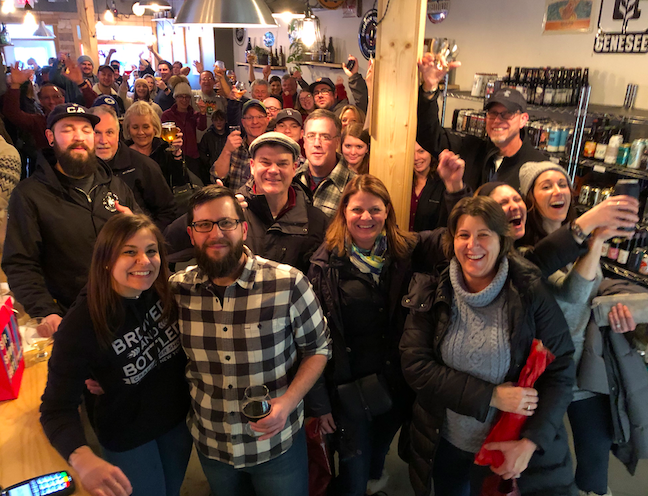 Brewed & Bottled has become a staple of Lewiston’s culinary scene. Shown here, in front, are owners Chris and Jessica Budde, with a large group of friends at a Lewiston retail event in 2019.