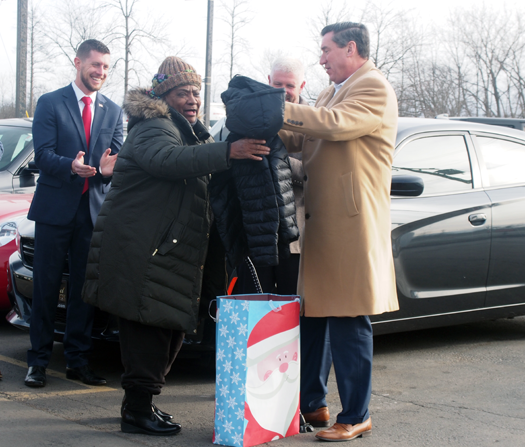 Two days before Christmas, Elizabeth Triggs, founder of the Buffalo nonprofit “None Like You/We Care,” received an invitation to go out to lunch.

Instead of going straight to a restaurant, Triggs was driven over the south Grand Island Bridge, where a surprise was waiting for her at Certified AutoBrokers on Grand Island Boulevard. That surprise was the donation of a new car to replace a vehicle that was barely functioning. It was meant to help her more effectively provide the community service that she and her nonprofit offer in the City of Buffalo and beyond.

Triggs had no idea that she was getting a new car. “I almost died. I was that excited,” she said. In addition to the new car, Triggs, whose nonprofit collected and gave 25 winter coats to kids, was also the recipient of a new winter coat. She said that the “kids were excited about the coat.”

“I got a new coat because I had an old coat that I had been wearing for about 100 years. I use it to wear because it’s nice and comfortable. It’s got a lot of pockets in it, so I don’t lose anything out of my pockets. Or nobody is going to take anything out of my pockets. You could put it that way, too,” Triggs said. She added, “I’m getting a new phone, too. Phone, car, coat.”

Triggs founded None Like You/We Care in 1996. She said that she wanted people to get the kind of help that she did not receive after her 1989 car accident that left her physically disabled.

“I couldn’t do any more work (as a result of the accident),” she said. “Then I decided that I was going to help other people because, when I had the accident, I was really sick, and I had a lot of stuff going on. So many people helped, even my lawyers. They fought for me; they helped me. I want to give back. When I was sick, I was so tired of going to organizations that never would help me. They said that they were going to help me, and there always was a glitch. Every time I looked around, there was something else that I had to do. I said, ‘You know, when I get to feeling better, I don’t want anyone going through what I went through.

Over time, the organization grew.

“We operate out of Niagara Falls, Buffalo, Rochester, Pittsburgh, anywhere where we are needed,” Triggs said, adding that they work with homeless people, people who are struggling with drug and alcohol addictions, as well as with youth and with people who just need a meal and a listening ear. “We do everything. We work with education. We work with people who are trying to get their lives together. We make sure that the services are there for them.”

None Like You/We Care owns two houses in Buffalo. A house on Sycamore is where the computers are set up. It has three kitchens and it was where Triggs cooked 135 turkeys for the Thanksgiving meals that she provided. The other house is on Southampton. The organization saved this dilapidated house from being torn down.

According to Kaitlyn Munro, the public information officer for the Erie County District Attorney’s Office, “Over the past five years, the Erie County DA’s Office has supported the mission of None Like You/We Care Outreach through Assistant District Attorney Danielle D’Abate, chief of our office’s community prosecution/training bureau.” As the community outreach liaison for the office “who coordinates our participation in fundraisers and donation drives, as well as service opportunities for our team of volunteers, Danielle has developed a close relationship with Miss Triggs.”

D'Abate and volunteers helped with the house renovations.

“She guided it. Painting the house and getting it situated. Now we’re looking for someone to help us do the roofing at the other house. We have a leak there, and we don’t know where the leak is coming from,” Triggs said. “Thank God for people like the DA’s office and all of these wonderful people and everyone who believes in us. I am so grateful.” 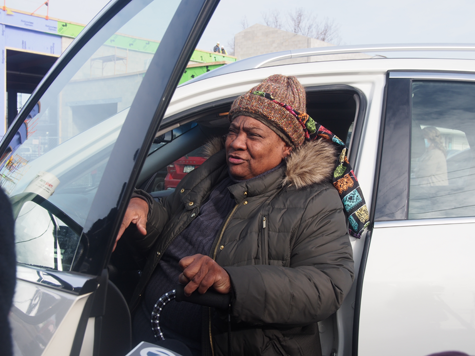 Elizabeth Triggs sits on the driver seat of her new car for the first time.

Munro said, “We’ve worked closely with her organization on dozens of events. Every Thanksgiving, she hosts a three-day event, where all of the food is provided at different locations: one in south Buffalo, one on the west side, one of the east side, where she gives out thousands of meals. People can come and pick up the meals. She even recruits Buffalo police officers, who go around and donate them to people that they know in the community who need a hot meal, people on the street. She organizes these crazy teams of people to help her with these events. So we help in any way that we can.

“We’ve done school supply drives, where we’ve gotten backpacks and different stuff. We’ve done winter clothing collections for adults and kids, and then she will hold another big event where people can pick it up. It’s just amazing what she does. We also adopted a couple of families. I believe that there were five kids that we bought Christmas gifts for. She partnered with Catholic Charities, and they gave Christmas presents to 260 kids this year. We’ve been working with her, whatever her needs are. If she wants to go clean up a vacant lot, we ‘ve helped her with that, paint inside a community building, we’ve gone and helped her with our team of volunteers or just through donations.”

When Triggs informed D’Abate of the poor condition of her car, the DA’s office sprung into action.

“Danielle had this connection at Certified AutoBrokers and basically explained to them all of the work that she does, and this vehicle is how she gets from location to location to pick up donations and do everything she does,” Munroe said. “The vehicle is intrinsic to her mission. So, that must have really spoken to the people at Auto Brokers, and they provided her with that new vehicle. So, we were basically just the connection between those two.”

Dean Jackson, who serves as both sales manager and finance manager at Certified AutoBrokers, said, “We were actually approached by one of our business partners, whose daughter works for the county attorney and said that she heard the story about Miss Triggs. All of these good deeds that she was doing and trying to help the community through Christmas and Thanksgiving, and they’d been doing this nonprofit for years. She was kind of in a pinch because she had a vehicle that wasn’t functioning. They asked us if we would repair the vehicle for her. We said, ‘How about if we just got her a different car? The car she’s got is just going to continue needing additional repairs.’ So, rather than doing that, we just contacted the county attorney himself and his team, and we said, ‘Let’s come up with a plan.’ ”

Certified AutoBrokers purchased the car, and a number of other businesses also helped with the plan, including Advanced Auto Parts of Grand Island, Continental Transmission of West Seneca, and Ziebart Undercoating of West Seneca.

“It turned into a big group effort,” Jackson said. He explained employees at Certified AutoBrokers were very moved by Triggs’ story. “People here were very emotional and very overwhelmed. I had all sorts of staff members asking if they could contribute. The store had contributed a massive amount of money, but the employees wanted to be a part of this as well. The store handled it, and we told the employees that it was unbelievable the support that they were trying to provide. Everybody was just very emotional and very happy that we would go out and make this happen for this lady, who was making it happen for Western New York every single day of her life.”

Delivery of the car to Triggs was set for the Monday after Christmas. Its delivery was delayed until Dec. 28, however, as there was one more gift for Triggs. Dec. 28 “is the big day because a couple of the companies that actually got involved decided that we were going to delay this process for a couple of days. Ziebart of West Seneca, when it found out what was going on, graciously donated a rust and undercoating for her with lifetime resprays. So, they are going to respray this car every year to make it last as long as possible.”

“She was very excited. She is such a sweet lady. We love to be part of this and of Grand Island,” Jackson said.