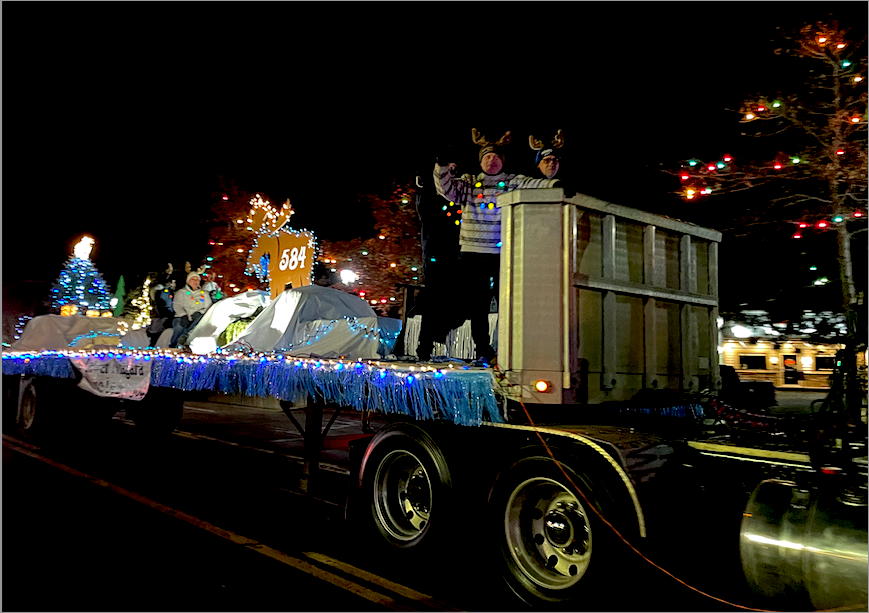 Pictured is the Lower Niagara Moose Lodge No. 584 float in the Lewiston Holiday Lights Parade.

Trustees in the Village of Lewiston were pleased with last weekend’s Christmas Walk festivities. They were particularly impressed with the debut Lewiston Holiday Lights Parade, which was organized by the Niagara River Region Chamber of Commerce.

At Monday’s work session, Mayor Anne Welch said, “Big thanks to the chamber, the police, the fire, and the DPW guys – and I think some Kiwanis guys were out directing traffic, too.”

She added, “I was just amazed at the size of the parade, and everybody that turned out even though it was cold. Kids were wrapped in blankets. They were yelling and dancing. Everything lit up. It was really nice.

“Great big weekend. … The skydiving elves, the tree-lighting – it was a really nice weekend for the village. Thanks to all that were involved.”

Trustee Claudia Marasco said Chamber of Commerce President Jennifer Pauly “worked for a whole year, after they (the Town of Niagara/TNBPA) decided no longer to do the parade on Military Road. … She pounced on it. She has been working so hard.”

Marasco said Pauly “already has ideas for next year. That parade … was just another great reason to come to the Village of Lewiston.”

Welch said, “I agree. She did a fantastic job.”

She added, “(Department of Public Works Superintendent) Larry (Wills) and the police with their barricades and their trucks, they kept us safe.”

•Overall (had a little bit of everything!) – Lower Niagara Moose Lodge No. 584

No residents were attendance at the work session, so of course no comments were offered at a public hearing on the advisability of adopting a proposed 20-cent water rate increase. The board was considering a measure to raise the rate from $3.75 to $3.95 per 100 cubic feet of water consumed.

Welch said, “We have to do this, because we’re not taking in enough money to pay Niagara County. It’s not that we want to raise the water rates for the residents, but this is something that our CPA said we had to do.”

The board unanimously approved the rate increase, which is effective for the billing cycle dated Jan. 1, 2022.