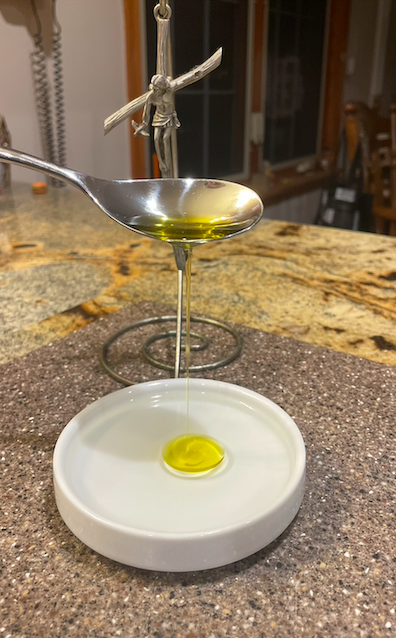 The process of dropping the oil into the water to begin the ritual.

This is what Nonna says when she is trying to ward off the evil eye for her granddaughter.  Nonna states, “As you are dropping the oil into the water, you say the name of the person you are doing the ritual for.  If the oil is dropped and there are no circles, and it hits the side of the dish, there is proof that there is negative energy, or the ‘evil eye’ is coming to the person. If the oil circles are large, this means that the affected person has the ‘evil eye’. If the oil just sits there and stays in the same place and the circles are small, the person does not have the ‘evil eye.’ ”

Anyone who grew up in an Italian family knows there are deep-rooted beliefs that envy, one of seven deadly sins, can directly impact the lives of those on the receiving end of the jealousy.  The tradition of the malocchio is that an Italian woman can ward off envious people and bad energy out of the lives of her family and friends.

Nonna was taught how to ward off the evil of jealousy, can turn luck around, and can bless her family with an old-fashioned tradition steeped in the belief that others’ feelings can have power over you.  Nonna actively practices the ritual of warding off the “evil eye”, which is called the malocchio, any time anyone around her needs help.

“Everyone in our family knows that, if things are not going well in your life, you need to go see Nonna. If you really need changes in your life such as changing your luck, overcoming negative feelings, looking for a lost item, or you just really want something in your life to happen, you go tell your Nonna about it,” said a family friend, Jenifer Christiano.

The malocchio is an urban legend that is deep-rooted in the Italian culture. The legend began as far back as the ancient Romans and Greeks. The belief is that, when a person feels negative energy around them, they can use this ritual to change their luck. By practicing this method of protection, some Italians believe they have a way to reverse their bad luck and alter the negative energy that is following them.

The fundamental aspects of this legend are rooted in envy and bad luck. People believe that envious people can send bad energy to others and secretly harbor feelings of jealousy and harm intended for another person. Those who believe in the malocchio believe envy is the state that can cause an enormous amount of bad luck toward the envied individual. The effect of the bad luck is said to be so powerful that a simple wrong look from another person can set the malocchio into motion.

According to the Italian Genealogy Blog, during ancient times, humans were not even allowed to brag because the immortal gods could become jealous. If the immortal gods were found to be jealous of the lives and happiness of humans, then it could lead to complete destruction of life.

According to the L’Italo Americano website, the person who can do the oil ritual for you is an old Italian woman who “as per tradition would have received this wisdom by the fire on Christmas night,” states Donatella Polizzi.  The origin of the malocchio can be traced back over 5,000 years. The legend is believed to have begun in the region of Sumer in Mesopotamia.

The tradition is handed down through Italian families.  Any Italian Nonna can pass on this tradition, but only on one special night.  On Christmas Eve, an Italian woman can teach her Italian descendants how to do the malocchio.  The ritual of the malocchio starts with putting water in a dish and placing some olive oil on a spoon.  Nonna blesses herself and continues with her chant and blessings.  To see results, this must be done at least three times. Each time Nonna must start with new water and oil. If by the end of the third time the circles are not smaller, Nonna starts the process over.

“Every time someone in her family feels that things are out of sorts, they call her, explain what is going on, and ask her to do the ‘malocchio’ for them.  Sometimes it takes 20 minutes, sometimes it takes days.  She will just keep doing the oil ritual until the circles are where they are meant to be.  Once she calls and says everything should be better now, low and behold, things feel different, and better,” says a relative of Nonna’s, Lisa DeMont.

Nonna Bolognese tells her family, “If you feel that you are having bad luck, if you get a migraine, if someone is envious of you, is jealous of you, you lose something, or you have anything going on in your life that is upsetting to you, it is time to do the Malocchio.” Nonna believes that, by doing this, you can block this negative energy from coming your way and change the path of the energy.

“Once we call Nonna, in most cases, our lost items are found,” states a neighbor, Andrew LaCongo.

Some may think this ritual is just a myth.  Others believe the powers of the malocchio are real and an important part of ensuring one’s happiness.  Regardless, every family is closer to their Grandma Nonna because of it. Relatives tell Nonna their problems, pray with her while doing this interesting ritual, which in turn allows them to believe in something more powerful than themselves. The ritual is about being closer to family, praying together, believing in things you can’t see and, most importantly, family tradition.

Another friendly neighbor states, “Even if she prays the malocchio for me and things do not get better right away, just knowing that she is working on it helps me get through tough times.”

Do you believe in the malocchio?