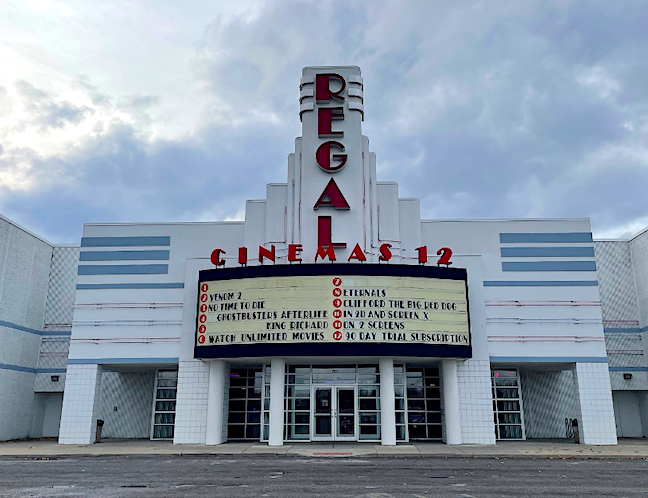 Various movie theater chains, like the Regal Cinemas pictured here, are trying to rebuild after taking an extreme financial loss due to COVID-19.

The movie experience in your home: Is it better?

Movie media has changed during the COVID-19 pandemic, for the best and for the worst. For streaming services, they are receiving the best viewership they have ever seen before, while movie theater companies are taking substantial losses. What used to be filled movie theaters watching the latest blockbuster Marvel movie, has now been replaced by watching the new movie from the comfort of one’s home on a streaming service. No longer are the family getaways to the theaters for a fun night out, they’ve replaced by watching these films from your own couch. This leaves many people with the question, is this movie experience better than what it once was?

Going to the movies used to be an exciting thing to do, a way to get away from your house and life and simply sit down to watch a movie. However, people are no longer comfortable with going to large indoor places for hours at a time, in fear of being exposed to COVID-19. Ever since the pandemic has started, movie theaters sales have been going downhill, including large theater chain AMC almost declaring bankruptcy in January (luckily saved through investors).

“Given the push to vaccinate the general population, an increase in cinema attendance seems likely, although AMC notes that no one knows for sure the future course of this and other strains of the coronavirus, and therefore thoughts as to future cash needs of AMC are uncertain.” AMC said in a press release in January.

There has been a significant drop in movie ticket sales and overall movies produced, but the theater chains are starting to slowly return to their old glory. The Numbers reveal all the data and numbers behind movie tickets sold and overall profit for the years of 2019, 2020 and 2021. The list for the tickets sales and profit are as follows:

With many businesses shutting down in 2020 due to the pandemic, it was understandable why there was a sudden drop in sales during that year. However, this year has only proved a little better for movie theaters, not nearly what it once was. Who is to blame for these horrible sales? Partial blame can be placed on fears due to the pandemic and of being exposed. Large public crowds are no longer favorable in the public eye, and with thousands of horrific deaths still on the rise due to COVID-19, nobody wants to spend hours at a time in these indoor theaters.

“I think COVID has made people go to the theaters less especially during quarantine; I know it has for me.” said Ryan Jessop, moviegoer and student at Niagara University.

While the pandemic can have partial blame for this, another unseen factor has taken charge and has appealed to people during this time of staying home, this being streaming services.

Unlike the theater industry, streaming services have been on the rise in the past years. With many people having to quarantine or stay in their homes due to the pandemic, streaming services seemed to be the perfect solution to end their boredom. Families have been staying inside, and instead of spending extravagant amounts of money on watching a movie in theaters, they can spend a smaller monthly fee to watch movies from the comfort of their own homes. This had led to a steady increase in profits in streaming service media, and less of a want to go to the movies.

“Now, it’s been nearly two years since I’ve been to the movies, and strangely, it’s one of the few pre-COVID things that I don’t miss at all” said Dr. Carrie Teresa, associate professor and chair of the communication and media studies department at Niagara University

Business of Apps revealed some of the statistics behind various streaming services in the past couple years. Currently, Netflix remains supreme with having 75 million U.S. subscribers, with Amazon Prime in second with 50 million subscribers. In 2020, streaming service profits totaled $24.1 billion, an increase from the previous year’s $18.8 billion. The amount of profit made in these years is significantly higher than the profit made by movie theater companies. Looking specifically at the year 2020, streaming services actually increased their profits, while movie theater companies had a dramatic decrease.

The top streaming service, Netflix, has grown with the number of subscribers and overall profit in part to the global pandemic. (Netflix press site image)

Both streaming services and movie theaters have their own pros and cons, but which one is truly better? Movie theaters have been a staple of American culture for many years and have been seen as a great way to kill time in a day. Going to the movies has been a tradition seen in many families throughout the years. It has always been a way to get out of the house and relax, and escape from life for a few hours away from your home. Going to the movies is a great way to catch up with friends and relatives that you may have missed due to being inside from COVID-19.

There are a few cons associated with the movie-going experience, much of which tie into our current situation regarding COVID-19. Being placed in a closed space, with little airflow, during the time of a pandemic does not seem like a smart choice for many families. On top of this, prices in movie theaters have been on the rise, now to the point where a ticket, drink and popcorn costs close to $30 on average, when some of these movies are already available on streaming services.

“Going to the movies, in my view, amounts to just paying 12 bucks to watch someone else’s really big TV.” said Teresa. During these times where money is tight, it just does not seem like a worthwhile investment.

Streaming services have their downsides as well. Some negatives include paywalls and not being able to view blockbuster movies. Now that more people are getting vaccinated, major movie studios have moved away from releasing their movies on streaming platforms and instead are releasing them in theaters only. On the occasion that a blockbuster movie is on a streaming service, the viewer might have pay more money on top of the monthly fee in order to watch this movie, such as Disney plus releasing Mulan and Black Widow on its “premium service,” which costs an additional $30.

Although each form of movie media, streaming services and movie theaters have their pros and cons, it is up to the individual to choose which they like more.

“I think we're seeing the same sort of reaction as major studios decide to release their new films on streaming services instead of theaters. So, I think film production companies will recover, but the theaters may not make it.” said Mark Barner, associate professor of communication studies at Niagara University.

By how it looks in our current time, it seems like movie theaters may become a thing of the past, allowing streaming services to become the new way to watch the best movies.