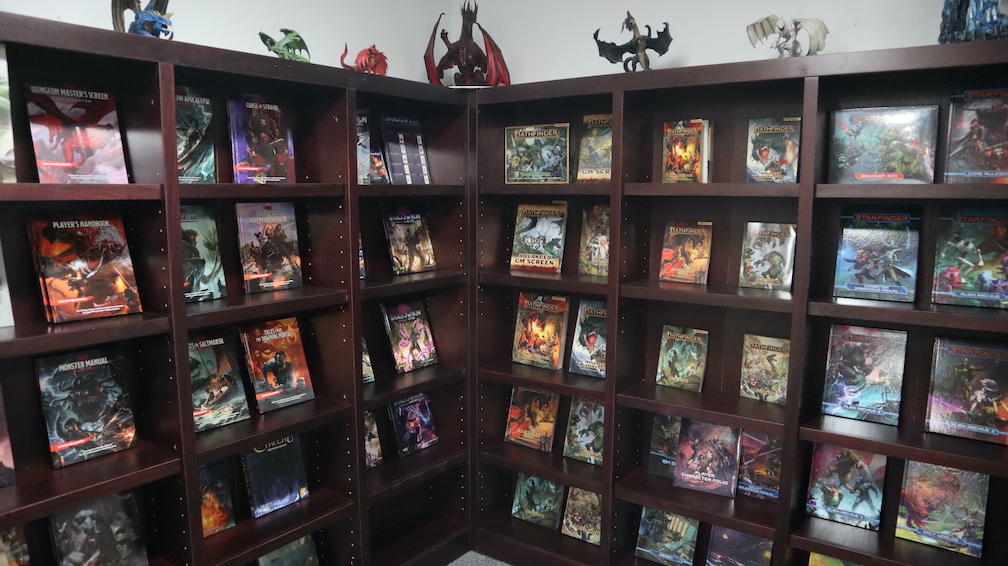 From starter sets to campaign books, Red Dragon's Hoard has all the materials new and experienced adventurers could need to play. Its glorious signage, commissioned by Buffalo Signmakers, was designed by owner Richard Mease and his wife, Nadezdea. The storefront looks fantastically epic at night.

Whether a would-be adventurer is looking to delve the deepest dungeons of the mythical Land of Faerûn or traverse the Outer Rim evading Darth Vader and the Galactic Empire, one thing is for certain: They’ll need to stock up on good equipment, supplies – and lots and lots of dice.

Fortunately, for those near the Town of Niagara, Red Dragon’s Hoard, a new tabletop gaming store at 2105 Military Road, has them covered. From card games like Magic the Gathering, to popular role-playing games (RPGs) like Dungeons and Dragons (D&D), Pathfinder and Shadowrun, one can find just about anything they need to play, including books, cards, painted/unpainted minis, prepainted settings and terrain, maps and, of course, dice.

Originally opened at the tail end of August, the store was only recently emblazoned with fantastic signage out front (commissioned from Buffalo Signmakers) featuring the store’s logo, a little red dragon drawn by owner Rich Mease, and lettering done by his wife, Nadezdea.

For Mease, the store is something of a dream come true. He’s been an avid fan of role-playing games like Dungeons and Dragons since the first time he played as a teenager, albeit against his mother’s wishes.

“I think I was about 15 years old the first time I played D&D,” Mease said. “My friend introduced it to me and said, ‘You got to play this game!’ My mom was a religious nut, so she told me to stay away from it, so I stayed away from it. (Eventually) I said, ‘OK, you know what? I'll give it a shot.’ I just wanted to see what it's about. I played it and got addicted to it ever since. And once I found out about that I also started getting into Star Wars: The Roleplaying Game. So me and my friends were playing both at the same time and we never stopped.”

Gaming remained a huge part of his life and even became a point of bonding while he and Nadezdea were dating.

“When we were dating, I was like, ‘You gotta play this with me (laughs).’ And now she plays; she’s got her own dice, bought her own minis for her character,” Mease said. Even the couple’s children are starting to take interest in the hobby.

But while gaming had long been a huge part of Mease’s life, he fully credits Nadezdea for urging him to turn his longtime passion into his profession.

“My wife was the one that suggested it. She would say to me, ‘You're always playing; why don’t you open a store?’ And that went on like the last two years,” Mease laughed. So, early this year, after his mother passed away and he lost his job due to COVID-19, the idea started to gain traction.

“I didn't have income coming in, so I'm like, ‘What am I going to do for money now?’ … So, then my wife said again, ‘Why don't you open a business?’ And I was like, ‘You know what? Can’t hurt, right?’ I mean, I didn't really want to go back to (my old job). So, there it is,” He said. “I would say April was when my wife and I said, ‘OK, let's give this a shot.’ We got the funds we needed and then finding a place was probably the hardest part – finding a cheap-enough place in a good area. ... (Then) we had to do a lot to get the place ready. … We had to add the exit signs and the lights; had to have an architect (check) this place out. So, that was probably the longest, hardest part of the whole thing.” 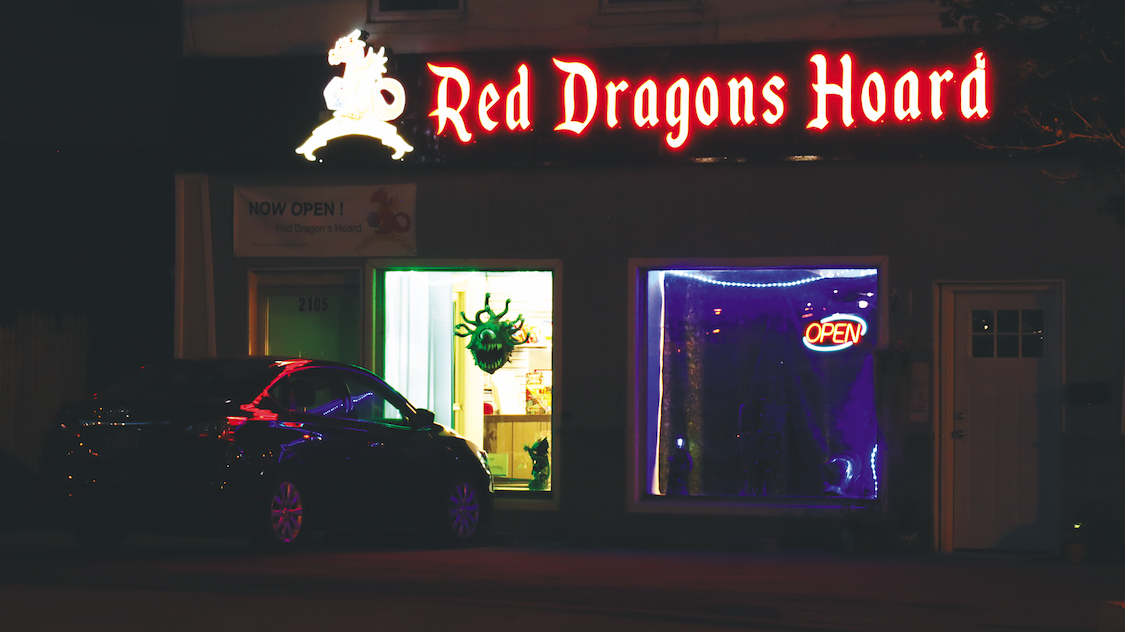 Opening a store amidst a pandemic posed its own challenges, including finding certain items to stock the store.

“A few things that I tried to order, the companies said they had in stock; but when the shipments came, there was stuff missing or backordered, like Pokémon cards. I've been trying to get those and they don’t have anything and it’s like, ‘Are you kidding me? (laughs). So, I have a lot of the new ones preordered and should arrive in November. So, there are certain things that are hard to get a hold of right now,” Mease said.

Despite the challenges, however, he said he knew he didn't want to go the online-only route.

“Everyone is doing online. We wanted brick and mortar,” Mease said. “The whole purpose was for people to actually have a place to play – that's what the whole thing was. We made it so people can come in and play, even if they wanted to bring their board games from home just to play with their friends here.”

That welcoming ‘let’s play’ atmosphere is apparent as soon as one walks into the store.

Amid the colorful shelves are several tables throughout the store where people can simply walk in, sit down and start gaming for free. Each gaming area is augmented with certain flairs and thematic decorations. One section, designed to invoke sci-fi and cyberpunk themes, is overlooked by autographed “Star Wars” memorabilia signed by actors David Prowse and Mark Hamill, who portrayed Darth Vader and Luke Skywalker, respectively.

But for those looking for a more private – and truly immersive – experience, Red Dragon’s Hoard features a premium gaming room that can be rented. The space – which features a large monitor for laptop connectivity, fantasy-themed tapestries and mounted swords on the walls, and some amazing sculptures and figures of some of the mythical creatures from the D&D universe – is a Dungeon Master’s (DM) dream.

“All this stuff is gonna keep expanding. I want it to be when people come in here they just go, ‘Oh my goodness, I wanna play here,’ ” Mease said. “People can pay and have the atmosphere they’re looking for. And in the future, people will be able to pay and I’ll DM games for them.”

In the future, Mease said the store will also host tournaments for popular games like Warhammer and Magic: The Gathering, and he’s also looking to develop DnD tournaments where people can pay for a character, sit in and have a chance to win gift cards for the store as they hit milestones or accomplish certain things. An event calendar can be found on the company’s website, www.reddragonshoard.com/.

Asked what it is about RPGs that he and other fans find so enthralling, Mease said it's about friends coming together and finding some respite from the problems of the world around them.

“I think the thing about it is it’s a board game with freedom and it's an escape from the stuff that's going on,” he said. “So many arguments with people on the internet; arguments about political views and everything. Here, we can sit, we can play, we can toss all that aside for a while, and it gives a relaxing time for people to enjoy themselves.

“It’s a reason to get together, especially now with the pandemic. People were so far away from each other for a year that people don't want to stay at their house anymore. Like, ‘Let’s go do something, go somewhere; let’s play a game.’ ”

For those curious but uninitiated with RPGs, Mease said he hopes they’ll come by so he can show them that magical (pun intended) experience firsthand.

“I’d probably show them an example game. It's better to show them than to tell them,” he said. “I mean, one of the best things is it’s cooperative. With other games, competitive games, people can really get upset. Some people take it so far where it's about winning and not caring about anything else. With cooperative play, I’m helping you, you're helping me, now were jumping at the table; laughing, joking; getting along and having fun. It’s a get together. It's like anything else one would enjoy, like going to a bar or going over to your friends house to watch football. It’s the same thing. You're going there to hang out with your friends and have a good time. And that's the most important thing about role-playing games is having a good time.” 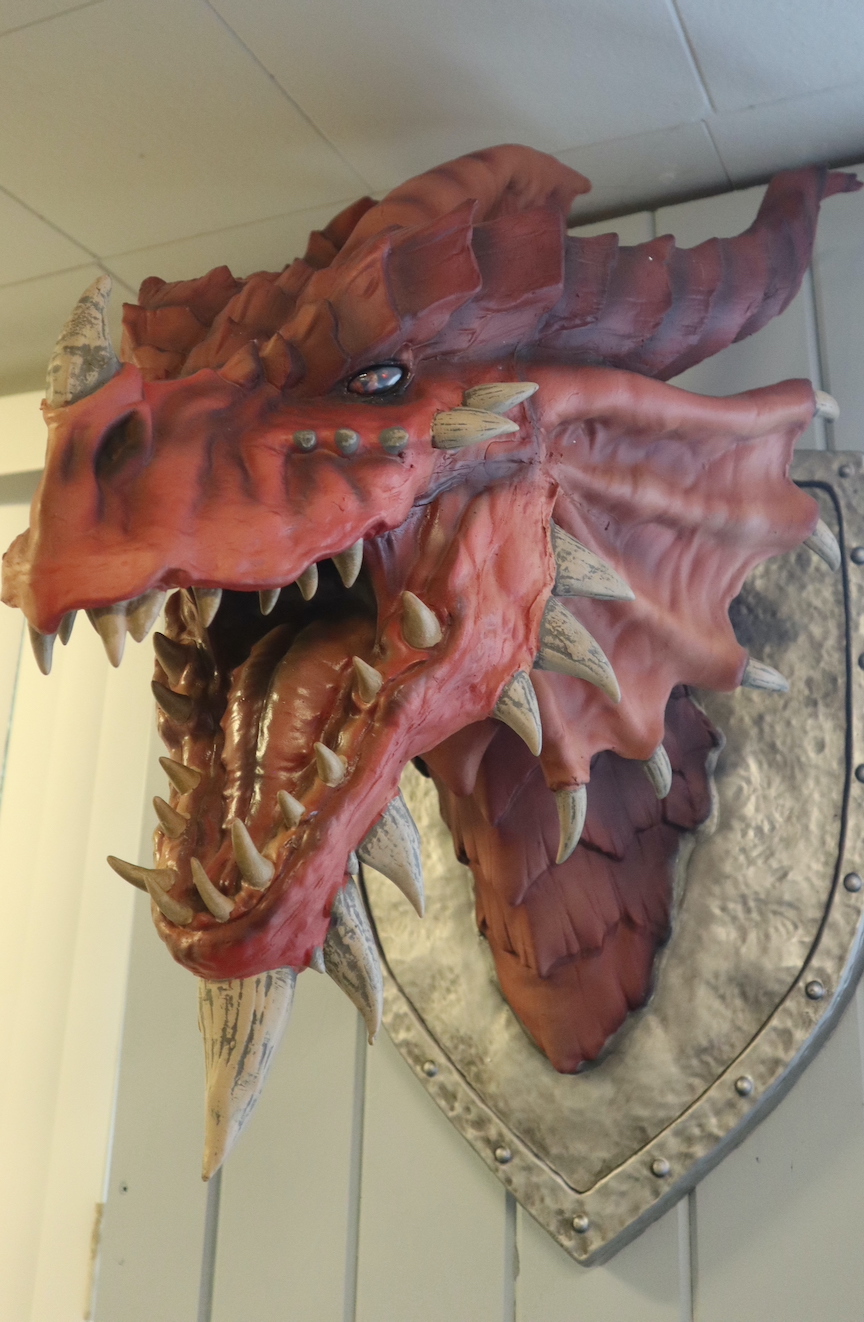