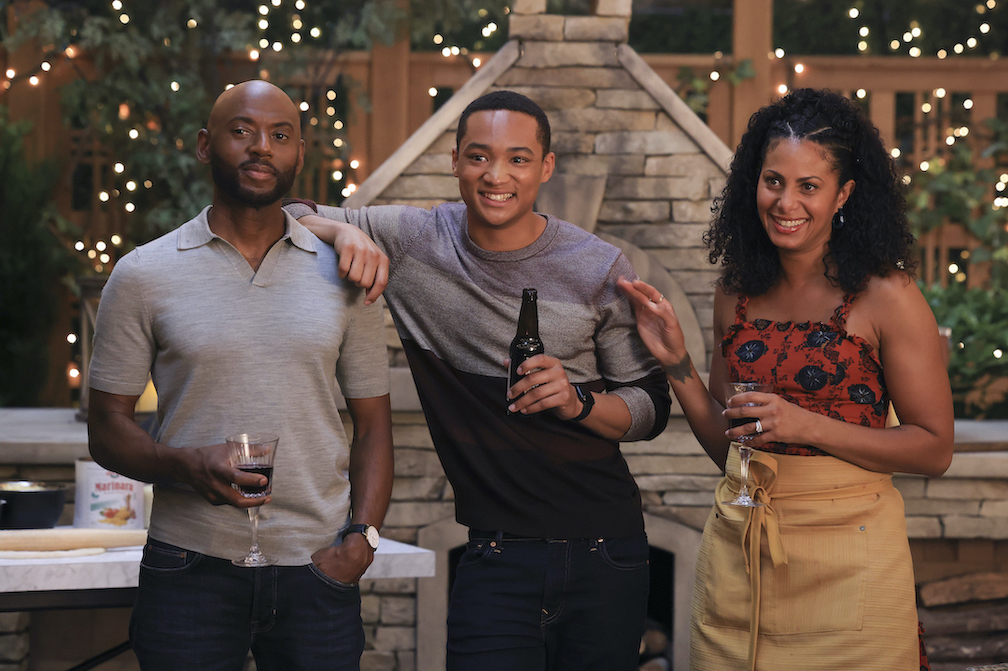 On the season four premiere of "A Million Little Things" - "family first" - Gary struggles in the aftermath of his encounter with Peter. Meanwhile, Regina and Rome put on a united front following the closure of Someday and the deportation of Tyrell's mother. Sophie deals with mixed emotions surrounding her mother while Delilah faces a difficult decision. Eddie inches closer to finding out who caused the accident, and Maggie navigates a new career opportunity. "AMLT" airs at 10 p.m. Wednesdays on ABC. Pictured are Romany Malco, Adam Swain and Christina Moses. (ABC photo by Jack Rowand)

Is it a stretch to say cable news networks are more interested in ratings than journalism? Really, is it hard to identify which ones play to the blue states and which one appeals to the red states? So much for objectivity.

It’s no surprise, then, that people have turned elsewhere to find the real story on topics uniting or dividing this country, as well as new approaches to water cooler talk (or whatever suffices for a water cooler in times of COVID).

ABC’s “A Million Little Things” made a mark in its first two seasons as the place for a dynamic mix of drama and comedy – not to mention some of the most intense episode-to-episode cliffhangers. Of course, when a show is built on the premise of a group of friends coming together to grieve a suicide among its ranks, you know it’s not afraid to tackle tough talk.

In the series’ third season, it masterfully embraced masking, while also giving a platform to sexual abuse, disability, divorce, and the courage of coming out in high school.

But where the show really set itself apart was in its handling of the unrest stemming from the death of George Floyd.

In particular, “AMLT” showed the hurt and harm that come with racism. Unlike those cable news networks, it painted a picture without cramming a particular side or viewpoint down its audiences’ throats.

To do that – to craft fictional storylines that vividly demonstrate the harsh reality of the real world in 2020-21 – while still being entertaining, well, that’s the mark of master craftspeople.

Series stars Romany Malco and Christina Moses were front and center in presenting impactful storylines that resonated with fans. His Rome felt compelled to interview people in Boston and ask them to share their experiences with racism. Her Regina was injured at a peaceful protest and – when paired with a pandemic – was forced to shut down her dream restaurant.

When the new season begins (10 p.m. ET Wednesday on ABC), the Howards are figuring out their next steps – Will Rome direct a movie? Can Regina find another kitchen? – while still adjusting to fostering a teenager, Tyrell (Adam Swain), whose mother was deported.

“When you know you've got fire in the cannon, and you know that, when this hits, it’s going to hit big – or you know it's going to trigger some interesting responses – it's a bit of a feeling of empowerment,” Malco told BTS. “I feel as though, here on this show, we are in what I would like to call ‘network TV sweet spot’ because, quite often, the network TV is television programs of being very safe because they don't want to offend anyone; or they're just firing off, firing off in search of the joke to not lose the attention of the audience. And we're kind of in this sweet spot where we get to have these really deep, troubling issues addressed through our characters. And what we're looking at is not, ‘Oh, America's gonna crack up.’ We're looking at it from the perspective of, ‘Oh, wow, this is going to have an impact.’

“It's a different thing. I think it's the network TV sweet spot.”

Moses explained, “I feel like one of the things is that we're not trying to dictate how to feel, and what you need to feel or should feel or should understand. It's just like, ‘This is what's happening. This is a reality. These are what these people are experiencing. These are what these people are experiencing all across the United States and throughout the world.’

“When you just put something out there, and in such a way that it's just human beings relating – human beings going through something, trying to figure something out – and you leave it, then it's just like, ‘OK, I get to watch that.’ And when someone is not beating you over the head with something, then there's space to actually feel it; or to see maybe yourself in there; or someone you know is in there. And even if the kneejerk reaction is like, ‘No; un-uh. This is where I go to escape. I don't want to talk about this.’

“Even though, when people say that our show is an escape, I’m like, ‘How?’ It's so intense (laughs). But that's only because they're being triggered with something that they weren't really triggered with another episode. And that to me is the fertile ground that sparks the healing – or the knowledge, the awareness, the empathy, the compassion – the doorway to start connecting.

“And then we have such a great team of writers who are putting their experience into this; their questions; their opinions; their thoughts; and then asking us, and getting our take; our experiences; our opinions; the stories that we want to tell and what we think is important – what we would like to see reflected. And so, it's a collaboration. And because of that, it feels relatable and more real because we're just human beings telling this story.” 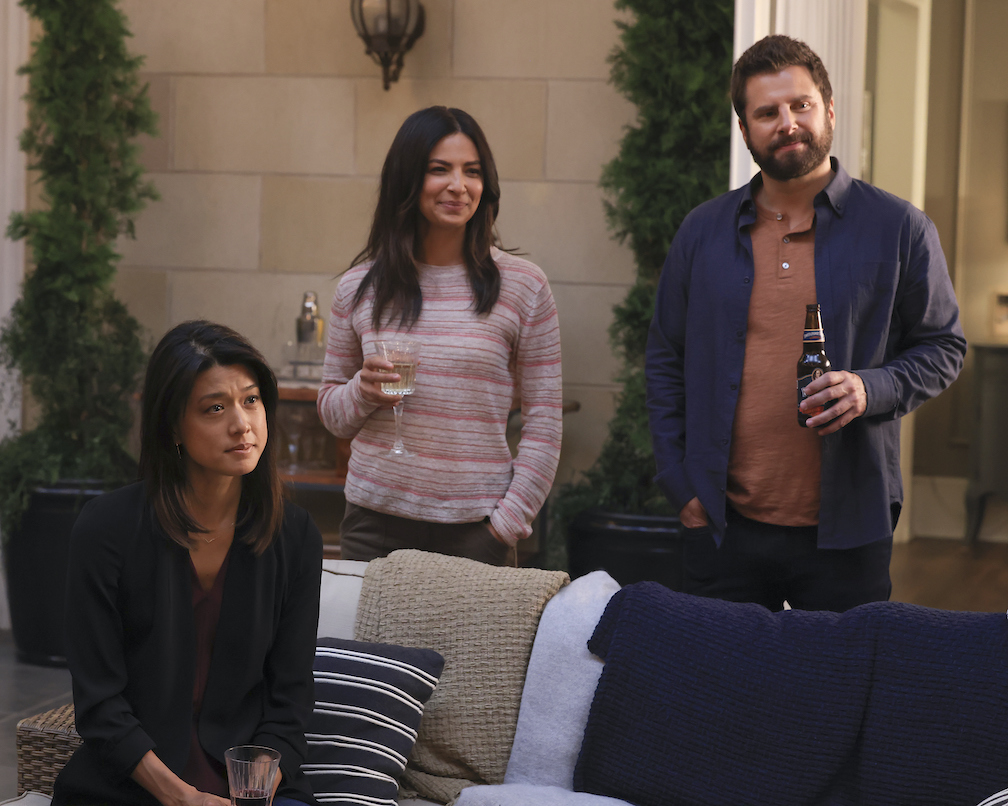 Malco said this atmosphere of inclusion and cooperation is something that’s grown since season one. He credited “AMLT” creator DJ Nash, director Nina Lopez-Corrado, and the creative team.

He said, “There are a lot of blind spots in our industry, because of the nature of it. And so, having a showrunner who's married to a Korean woman, raising two half-Korean children in the United States, plays a big role, where there is some empathy.

“And also, I had an experience where I felt as though I was being misrepresented along the earlier part of the second season, and even the latter part of the first season. And Nina Lopez, who was our showrunner at the time, said we have to have this conversation with D.J., and Moses had expressed some concerns also. And so, as a result of that, our showrunner and Nina went on a tangent to ensure that we had more representation in the room, and did a really good job of doing so. Because of that, we could feel that he was very much interested in making sure that these stories were depicted fairly.

“And we all have our limitations; we all have our blind spots; and he believed having representation in the room – women, men of color, women of color – how do you depict the biracial experience. So, what he ended up doing was he ends up including us in the process. And we have a showrunner that will literally come to you and say, ‘Hey, listen, we want to get this right. Would you mind taking a look at this and maybe writing something that you think might be appropriate, and then we'll send it back?’

“It's such a collaborative experience, and I believe that that's a big part of what it is. And I have to tell you, I agree with you (that ‘AMLT’ trumps cable news). Looking at it from a Korean woman's perspective or a half-Korean young man's perspective; or even Roday, who plays Gary Mendez, his perspective. I, too, felt like I became a lot more empathetic to other people's approach to navigating the situation as well.”

Malco said, “I believe that a big part of it is an incredibly collaborative team, in which the writers and the actors don't necessarily have like a hierarchy when it comes to determining what's the best way to depict these types of stories. So, that plays a huge role in it.

“And then the other part is that, if we only relied on Romany’s story to tell this, then guess what? I might actually shut you out. I might actually alienate you. And by being able to do it in this way, we're able to be a lot more empathetic to the whole.

“I think that that's a big part of why we get the responses that we get. And don't get me wrong, there are people who are already preconditioned to what their media is telling them, and they're so heavily invested. You know, we're a very programmable people. We live vicariously through our screens. Few of us are having any real interaction with human beings. And in order to even exist in this country, there's a level of cognitive dissonance that you have to practice.

“Like I like to tell people, everybody loves a good fried chicken sandwich. But nobody wants to kill the chicken. That's what it's like to live in the United States of America. And when you block things out, you block it out 360. You just don't realize that you're doing it. And so, as a result of that, the human experience can be incredibly compromised, and it also compromises the ability to empathize.

“So, to be part of a group that is very conscious about making sure that you understand what goes into creating that chicken sandwich, eh, I feel like the biggest compliment I've probably gotten this year is what you just said.” 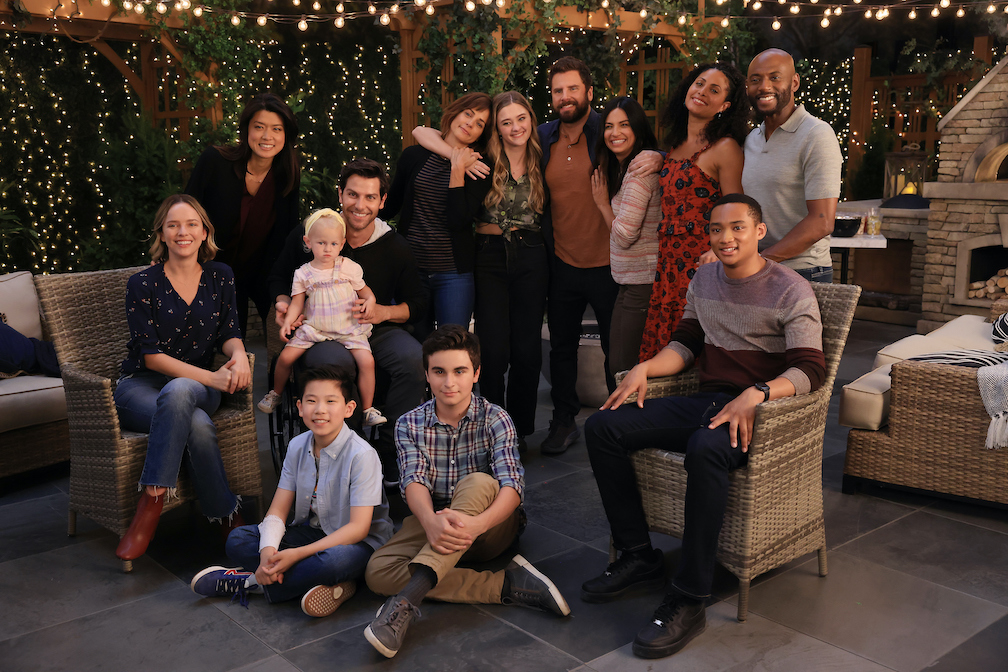