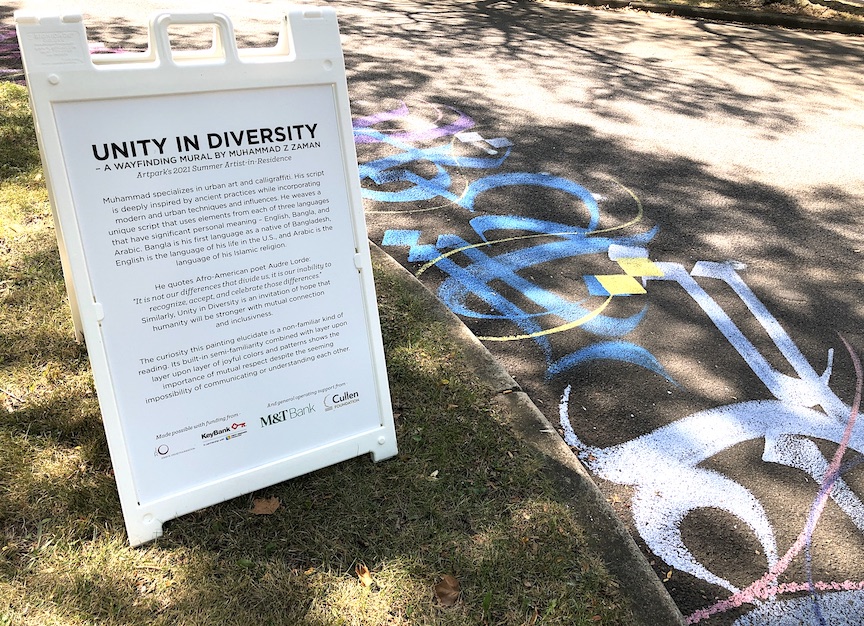 Pictured is a portion of "Unity in Diversity" by Muhammad Z Zaman.

Trustees in the Village of Lewiston on Tuesday unanimously voted to turn down a second proposal from Artpark & Company to connect a new mural out of the venue and down South Fourth Street.

For a third time, Artpark & Company Curatorial Projects Manager David Seide pitched the idea of incorporating part of Muhammad Z Zaman’s mural, now titled “Unity in Diversity,” along the sidewalk. This time, however, he had a list of residents he said were in favor of the project.

He emailed the roster of a dozen-and-a-half affirmatives to the mayor’s office, stating, “It is clear that the overwhelming majority are in favor of the public art mural on the sidewalk from Center Street to Artpark. I look forward to an affirmative motion being passed.”

But Seide was greeted at the meeting by three residents not in favor of the idea, which would’ve incorporated small blocks thematically connected to the main mural located in Artpark’s main entrance and parking lot.

In addition, trustees Claudia Marasco and Dan Gibson said they conducted their own survey and, “We seemed to get very different results than what you have written on this paper,” Marasco said.

She added, “Most all the people that we spoke to said ‘No.’ Now, we're talking a street that’s historical, where the implementation would actually go.”

She explained some people weren’t for or against the mural’s continuation, but “What they really wanted is … ‘Could you fix our sidewalks that are broken? Can you get us some lights down here? This is not where our interest is, in this project.’ ”

Marasco said there was some confusion over why the original mural proposal had changed, “so we had to try to untangle this in their conversations with us. So, for that reason, we really didn't find the support that you did.”

Mayor Anne Welch said, “I think there was some misinformation when this first started, because I know myself, I thought what they have done in Artpark with the full painting on the sidewalk, I originally thought they were going to do that on the sidewalks from Fourth to Artpark; which was not the case once we went down and looked to see what was really happening. We spoke to the artist, and he said, ‘No; it's not that.’ And he showed us it would just be small, little blocks here and there on the sidewalk. And I had said, because we were not in favor of the full painting, and I said we could revisit it, if it’s something different than what we thought it was. So, that's why David came back and said it's not that; it's these smaller blocks just to connect Center Street all the way down to Artpark. …

“I think they were just asking us if we would like to be included in something to connect us. That’s where this came up with the sidewalk.” 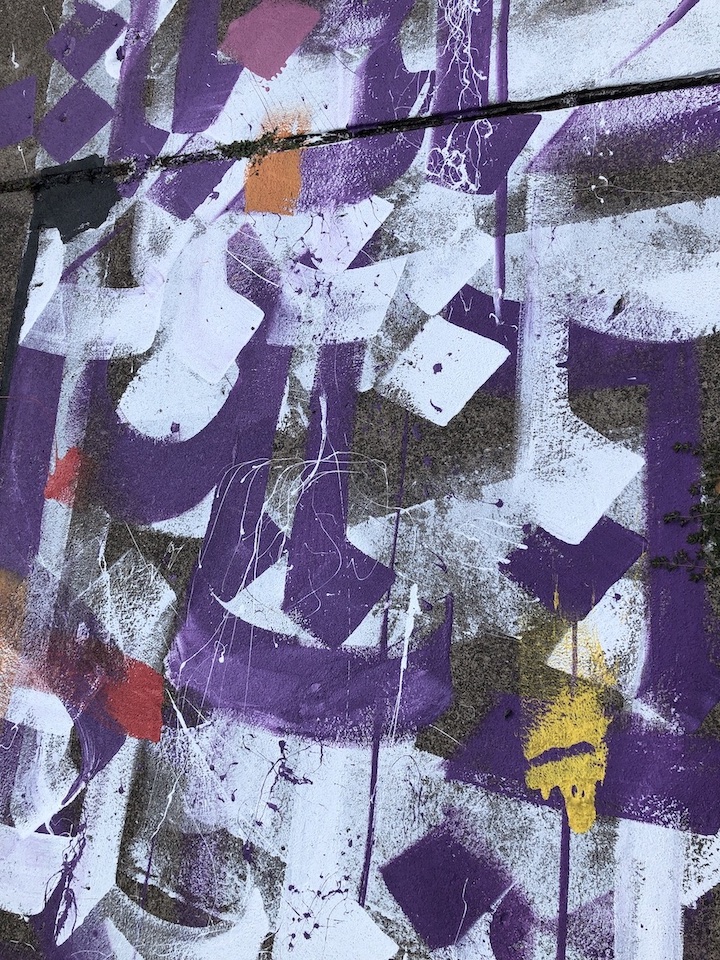 Pictured is a portion of "Unity in Diversity" at Artpark by Muhammad Z Zaman.

She said the mural would be akin to graffiti, and cited a National Association of REALTORS study suggesting such a painting would lower property values in the neighborhood.

“I can appreciate Artpark in its entirety of painting of the park. What I'm not OK with is having Artpark on my porch,” she said.

Napolitano added, “My husband I work extremely hard to keep a clean, nice, inviting home. We were given a hard time about restoration we had and to continue to do to our home. It's mind-blowing that this is even considered, being a historical community.”

She explained Artpark concerts and concertgoers are taxing, in terms of noise, parking and trash. She’s accepted that reality, but “Down the street is Artpark. … Not my neighbor’s home; not my home; not my sidewalks; not my lawn. I would very much appreciate if my home stays my home, and not part of Artpark. Taking the sidewalks does directly tie us to Artpark, and I feel every homeowner – and I stress every homeowner – should have the right to not have this.”

Seide has maintained that residents could opt out of having any design in front of their property – though he emphasized “art clearly increases the value, nationally, of property. And not graffiti. This is actually artwork.”

Moreover, Seide said he followed all prescribed municipal steps for project approval – and, in fact, he was given conceptual approval by the Historic Preservation Board. However, Seide conceded it would’ve been better to ask residents first, before proposing the idea to elected leaders.

He again said the survey results were “overwhelmingly positive” toward extending the mural. But Welch said, “I looked at it, and the majority of the people here are either in the same household, that said ‘Yes,’ or on the other side of the street. Clearly, the people on that side of the sidewalk are not in favor of it.

“And the way I feel about it, I did not have a problem with it. However, we have to listen to our residents that live there, and it's their sidewalk. And although I do feel that we should have a connection with Artpark – and we've been trying to work on something to connect us – maybe this is just not the right choice to do right now.”

Marasco said, “I think that what the people were trying to say, if we just summed it up, is art belongs in Artpark. That’s why it was created, for 174 acres, in 1974, was to basically be the perimeter and the place to house all of the different types of art. And they haven’t been exposed to having anything like this outside of the park. Maybe it’s just too tender a time and too new for them to be able to do this. … But they certainly want to see the entrance to Artpark much better; more colorful; more favorable; something more attractive. And they definitely want to see some lighting; and they want their own sidewalks that are cracked fixed.”

Welch said, “I, for one, do not want to just say the art belongs in Artpark, because I have had an art committee trying to bring more art into the Village of Lewiston. We have a lot of talented people and artists, and I would like to see more art in the village.

“Maybe this is not the one right now, but maybe down the road there'll be something different that we can work on. But like I say, I don't think it should just be in Artpark. I'm hoping to see more around the village.”

She thanked Seide and said, “We appreciate your presenting. Like I say, we'll still try to work together to connect. … And we will enjoy the artist, what he’s done at Artpark. I think he did a fabulous job down there. It looks really, really nice.”