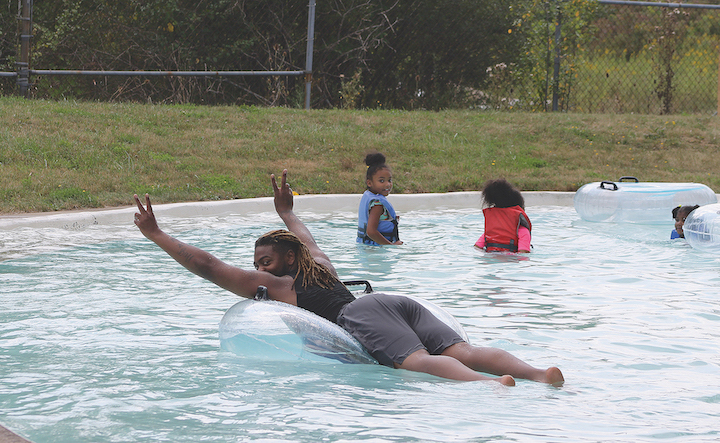 A Lazy River rider stretches out to enjoy the moment. (Photo by Karen Carr Keefe)

Niagara Amusement Park & Splash World managers and staff worked hard to prepare for opening day of the water park section, and on Saturday, the fans – the ultimate judges – gave their verdict: They like it, and they want more.

The opening of Splash World is a brand-new chapter for the 75-acre amusement park at 2400 Grand Island Blvd. The park, formerly Fantasy Island, gained new management in June with Gene Staples and his company, IB Parks & Entertainment, under a long-term lease with property owner Store Capital. Staples also operates parks in Indiana and New Jersey.

Splash World’s initial calendar shows it will also be open today through at least Labor Day.

Liam Pogue, 9, of Lockport has the distinction of being the first paid customer to walk through the gate of Splash World when it opened at noon Saturday, Aug. 28. He said his favorite ride was the Lazy River.

Debi liked what she saw on day one.

“Right off the bat, from standing in line, we felt a warm feeling. All the employees we’ve engaged with want to be here. They’re warm, they’re outgoing, everybody is super-friendly,” she said.

Darren and the family have visited a number of amusement parks, and their enthusiasm is evident for Grand Island’s new Splash Park. 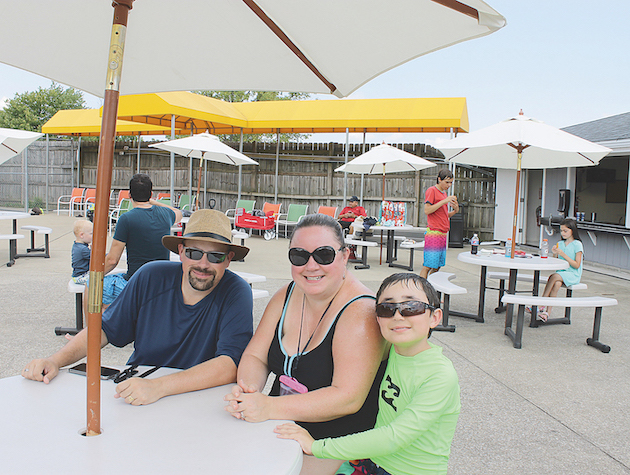 Darren, Debi and Liam Pogue enjoy a break from the rides, under the cool of an umbrella at Splash World Café. (Photo by Karen Carr Keefe)

“One of the things I look for in a park is the little things, like how clean it is, the landscaping, how friendly the employees are, and they’re hitting all that very, very well,” Darren said. “Obviously, there’s things they need to work on – and that will come with time – but it’s just been a very, very pleasant experience.”

Debi said, “What really endeared us to the opening of the park is hearing Gary Fawks speak.

“Welcome to the new Splash World,” Fawks said. “This is basically just a little sneak peek, to get you guys a chance to get wet and let you know that we’re all serious about the future of this park. Indiana Beach, IB Amusement Parks & Entertainment is so proud to have you all out here today.” 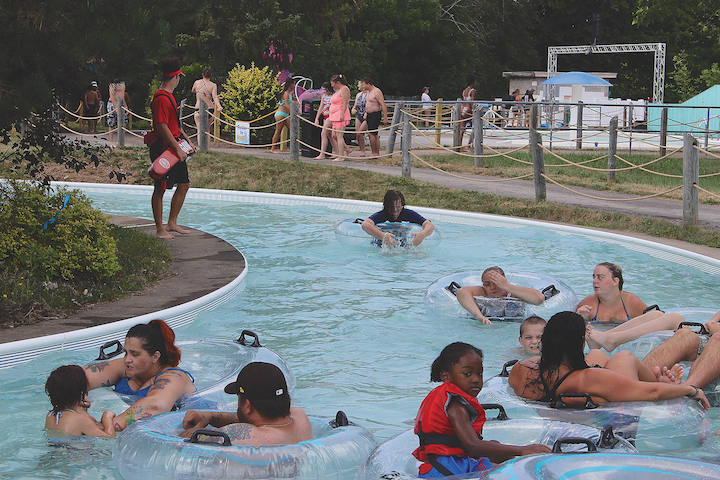 Fawks added, “The town has been overwhelmingly supportive, as have all of you guys,” as he gestured to the guests waiting to enter the park. “You’re going to still see some blemishes. We’ve got a lot of work to do; not everything is open yet. But we hope you have a good time. Enjoy the fact that we are open again, and just think about all the future that this park has. Again, welcome to Splash World, and we’ll see you inside.”

For those who attended, the water rides were a welcome destination on a hot day in Western New York.

Jonathan Suggs and Christine Zuppa of Buffalo tried quite a few of the rides.

“We enjoyed our time here,” Suggs said. “Water slides have been good.”

Their favorite ride? “The Lazy River, ’cause you just get to relax in the cool water and float around,” Suggs said.

Stephanie Washington and her son, Ricky, 16, of Buffalo, came opening day to continue a family tradition. “I’ve been bringing him since he was 3 years old. He loves it. He used to cry when it was time to take him home,” Stephanie said.

Ricky favored the tall water slides: “It was fun.”

A staffer who was all smiles on opening day said she was happy to be on board for the launch under new management: “I’m really excited to see the park back and running again. I love seeing all the people coming with their families and everything.”

Another staffer said, “It’s going awesome.” She said she was “super-happy with the turnout.”

Since July, about 30 lifeguards have been training with and received certification by StarGuard ELITE.

The park, idle since February 2020 when it was closed by former owner Apex Parks Group, had fallen victim to vandalism, graffiti and disuse. When some rides were sold off, Grand Islanders were among the many fans who feared the 60-year-old park was gone for good. Staples and his company set out to clean, restore and polish up the park to bring it back up to operating order.

The day before the launch, he said, “I think from what I see, a lot of people will be happy to come by, check out the work that we’ve done so far, support us … for whatever type of season we can put together for the rest of this year while the weather and the staffing cooperates with us. Hopefully, before it’s all said and done, the other one or two components of the water park will be ready to go and give everybody a nice sendoff, a great feeling going into the offseason and something to really, really look forward to for 2022.”

The full park is expected to open in the spring of 2022 with a full ride package.