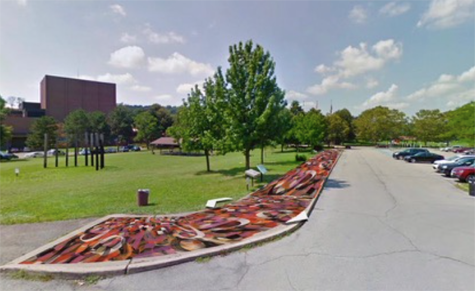 Artpark & Company presented these conceptual images to the Village of Lewiston as part of discussions for a mural connecting the venue with South Fourth Street. Board members were told the colors and design are likely to change. (Images by Muhammad Zaman/provided by Artpark & Company)

Mayor says village will explore other ways to connect with Artpark

Upon further review, Artpark’s new mural will be staying at the state park.

Village of Lewiston trustees declined an offer from Artpark & Company to extend the mural from the corner of Center and South Fourth streets to the visual and performing arts venue, where it will become a painted sidewalk. They cited pushback from neighbors who were not in favor of artwork in front of or near their homes.

Mayor Anne Welch said, “Before COVID, we used to have art meetings with the local artists, and several times it came up how to connect Artpark to the village. They’re trying to connect us, because we feel so separated from them. I think that this is a great idea, it’s just that we don’t have a lot of information on it.”

She also cited potential challenges in maintaining a painted sidewalk in winter months.

“There’s a lot of questions about it … and historic homes, would they want something abstract in front of their historic homes?” Welch said.

The answer trustees received from residents was no. 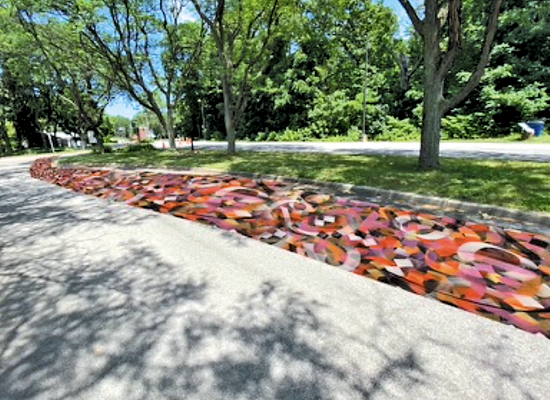 Last week, Artpark & Company Curatorial Projects Manager David Seide told the Historic Preservation and Planning commissions that Artpark & Company was awarded a grant as part of the “Artpark Works” program, funded by the John R. Oishei Foundation and the First Niagara Foundation in partnership with KeyBank. Monies were earmarked for the creation and installation of a mural titled “You Will Never Walk Alone” by artist Muhammad Zaman.

Seide presented images of similar art projects and said “beautiful,” “large-scale calligraphy” would “start with two letters” on South Fourth Street and “it’ll keep getting more dense as it gets towards the park until it becomes a full-length sidewalk.”

Assessing that proposal and, after speaking with residents, Trustee Claudia Marasco said, “We didn't see a finished product at all. We all saw something that was a prior presentation done someplace else with totally different colors.

Seide explained, “There have been a lot of suggestions – all of which we’re trying to listen to and take into account.”

He noted, “Lewiston is known for its arts. It’s part of our identity. Whether it’s Artpark or Council on the Arts, or any of the numerous festivals, the arts actually elevate our culture. They bring visitors here. They spend money here at our businesses, our establishments, and help all of us thrive. I think we need to recognize that. I think many of us do. This is yet one more piece that could serve that purpose.”

The mural was intended to further connect Artpark & Company with the community, if not specifically the neighborhood. Still, Seide said South Fourth Street residents could opt out of having art in front of their house, if they so desired.

He noted the paint chosen would adhere to the sidewalk, have a gritty element to prevent slips, and would have solar-like reflective capabilities. Moreover, Seide said Artpark & Company would be responsible for upkeep.

There was some concern the mural would tie into the new Gallo Coal Fire Kitchen – which was approved to have an art-inspired courtyard. Seide noted the end point was selected for geographical reasons and was not intended to single out or endorse one restaurant.

He said Artpark & Company wants to work with more Lewiston businesses, but this specific grant – which is time-sensitive – only covers mural work within the park and potentially along South Fourth Street.

A trio of South Fourth Street residents said that, while they like the idea – and even applauded the applicants – the mural is a better fit elsewhere.

Marianne Gittermann, who’s resided there for 30 years, said, “I’m not against the artwork, per se, just the location of it. I think it would be better down in Artpark, so it can be maintained … in Artpark. And it would be adding more art to that area.”

Marasco, who lives next to the venue, agreed. She said art could serve a dual purpose.

“We love Artpark,” but the entryway is “very bleak,” she said.

“Artpark, if you go in, you’re not really sure where you’re going half the time. It’s really messy in the very beginning of it,” Marasco said. “And even people going to concerts have confusion over, ‘Do I go this way?’ There’s not an actual sidewalk on the left-hand side. There’s one on the right-hand side, but that’s private residents’ houses. And so, when you go in, it’s like you see sidewalks, but you’re not sure where to go.”

With this mural in the park, or another new piece, Marasco said, “You could make, I think, a very beautiful presentation, making it going south so you’re following the body of water that is so beautifully next to it. And make some composite of the colors of the river, and the blue and the green, and turn that into something magnificent within the park itself.”

Welch said she would continue to work with Artpark in finding a way to create a more tangible connection between the site and the village.

In recent years, Artpark & Company has commissioned murals on the courtyard walls and in both the VIP and main parking lots.

•The board voted to include Juneteenth as a scheduled holiday, beginning June 19, 2022.