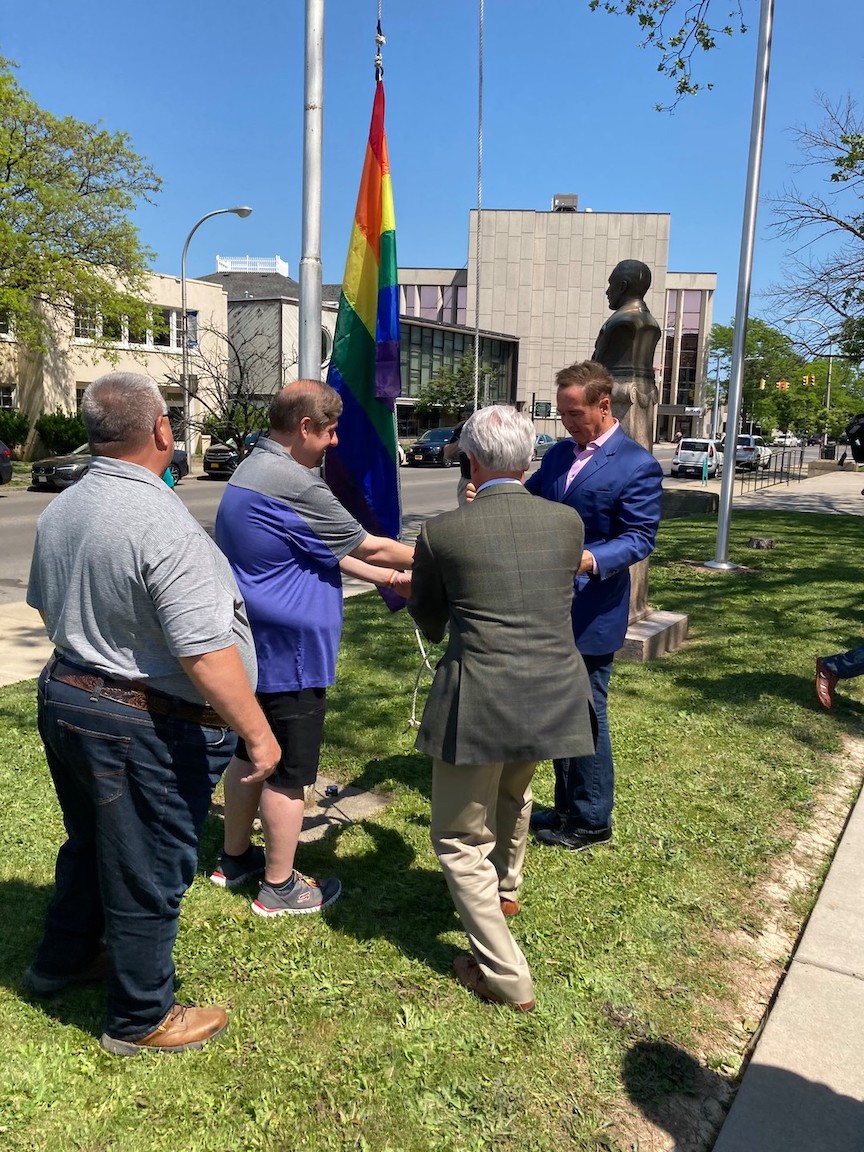 Story and photos by Michael DePietro

On Tuesday, June 1, the LGBTQ+ flag was raised in a number of notable locations throughout Niagara County in honor of Pride Month. Flag-raising ceremonies were held at Niagara Falls City Hall, Lockport City Hall, Niagara Falls State Park and, for the first time this year, Artpark.

Congressman Brian Higgins took part in the ceremony in Niagara Falls and spoke about the importance of the event.

“Our founding documents are all about language of inclusiveness and, unless those words mean everybody, they mean nothing to anybody,” he said. “(This) is an important day where we celebrate our great diversity of our individual communities that make up this beautiful country. We celebrate, with great enthusiasm – with great sense of inclusiveness – the great contributions (the LGBTQ+) community has made, because we are rich and noble because of all of them.”

Niagara Pride President Ronald Piaseczny said Niagara Falls was among the “most important” stops for the day as it had been the earliest adopter of the tradition in Niagara County.

“City Hall and Niagara Falls has been very welcoming to Niagara Pride and it just speaks volumes that being able to hold a flag-raising ceremony every year on June 1,” he said. “It really speaks to the diversity and the inclusivity of Niagara Falls and Niagara County, and just really speaks to the rich tapestry of diversity and complexity that is part of our communities – where we work, where we shop, where we live; so it really is just a great way to honor the LGBTQ+ community.”

In his turn at the podium, Mayor Robert Restaino invoked the words of Harvey Milk – the first openly gay elected official in California history and a figure who remains among the most revered names in the gay rights movement – to highlight why the flag-raising is important.

“I came across something that I think is most appropriate for today, and this quote is: ‘It takes no compromise to give people their rights; it takes no money to respect the individual; and it takes no political deal to give people freedom,’ ” Restaino said. “As the congressman said, freedom for all means all. So, today we celebrate the fact that, for that freedom, we need to make sure that we're also giving diversity and recognition.”

Niagara Pride is Niagara County’s only LGBTQ+ social and community service organization. The group’s largest fundraising event, “WNY Shopping with Pride” is set to run from June 4-12. More than 30 Niagara County businesses are taking part by donating either a percentage of sales or a lump sum donation to the organization. Proceeds will be used to benefit future Niagara Pride programs

For more information about “WNY Shopping with Pride” (including a list of participating businesses), or Niagara Pride, visit www.niagarapride.org.