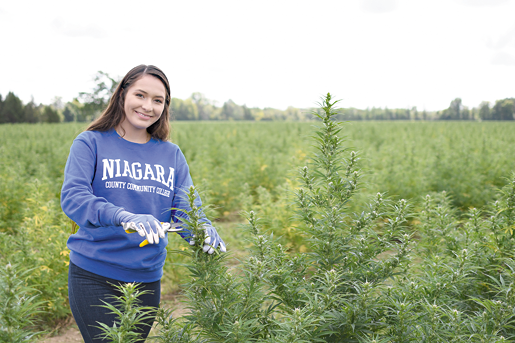 NCCC ahead of the curve amidst budding cannabis industry

On March 31, Gov. Andrew Cuomo signed legislation legalizing adult use of cannabis throughout New York. During the announcement, Cuomo said the development of an adult-use cannabis industry in New York has, “The potential to create significant economic opportunities for New Yorkers and the state.” Its estimated the industry could bring in $350 million in tax revenue each year and potentially create 30,000 to 60,000 jobs.

With new jobs comes the need for an educational infrastructure designed to train for these new positions. But while many schools around the state are just now beginning to design programs to meet this new demand, Niagara County Community College finds itself very much ahead of the curve.

In 2019, the college began offering a cannabis-focused curriculum through its horticulture program. Last year, it expanded its cannabis-centric course offerings to its accomplished culinary arts program. NCCC is now one of the only SUNY-accredited schools to offer a culinary-centric cannabis course.

“It's interesting because we really did come out ahead,” said Lydia Ulatowski, vice president of academic affairs. “We were just anticipating – looking at places like California and Colorado and knowing that it's been legalized in different states – we just knew that eventually New York would get involved in this, and so we started thinking about what we could do – particularly since we have our horticulture program. And then if you just look at employment outlooks across the nation, 44% in job increases are expected in the cannabis field. So we just kept on looking at those numbers and we knew they weren’t gonna go away anytime soon.”

While NCCC said it is proud of its foresight and willingness to prepare for the changing job market, Ulatowski said the real credit is owed to forward-thinking faculty.

“I really give kudos to our faculty for knowing their own industry. They know what's coming down the pipe. They know what it is our students need to know,” she said.

Stanko said, “We have a horticulture program that's been around since 1979 and all these years we've focused on traditional horticulture. … But in 2018, the federal government redid the farm bill and they took hemp off of the controlled substances list, which allowed growers around the country to start growing hemp. We recognized this new crop was going to necessitate that we start being able to provide employees to these growers.”

The department went on to debut four courses in fall 2019 – business of cannabis, cannabis production, biology of cannabis and cannabis pest management. Going forward, the program will also be offering two new classes: medical applications of marijuana and extraction technologies.

But the coursework is only one facet of why NCCC’s programs are so valuable. Per the degree program, students are required to fulfill an internship the college provides through a number of local partners. This gives them an edge in an ever-growing job market.

“We've been placing those students that have a cannabis focus into positions with local growers of hemp and retail CBD sites,” Stanko said. “So, they've been getting their hands on training right with local businesses. They're seeing how it is from ground up. And then they're going on to get employment in that industry as well. We have a number of externship/internship sites that support our students and … we're very grateful for everything they do for our students. They're a big partner in helping train our students and readying them for the industry. So, it works out really well. We have near 100% employment across the program – from the traditional program to cannabis – and we just see it growing. Now that recreational marijuana is (legal), we see that expanding.”

“It's exciting. We always try to address the needs of our community and the needs of local industry, and this is just one more way where we're able to do that,” she said of the cannabis curriculum. “Students have been asking about this for a long time and, now that we can do it, it's a great thing. It’s one of the fastest-growing programs on campus right now. COVID has really hurt the enrollment of a lot of colleges and universities, but our program is growing very strongly.”

Stanko also noted that, via NCCC’s Workforce Development department, these programs are available for those not enrolled in a degree program.

“Students, or really anybody who wants to learn more about (these topics), can enroll in the class,” she said. “It's a lower cost than paying full tuition and they get the same education.”

For more information, call the Workforce Development office at 716-614-6236 or email [email protected].

The cannabis industry isn’t just relegated to the growing and cultivation of the plant. It's also creating opportunities in the culinary field. 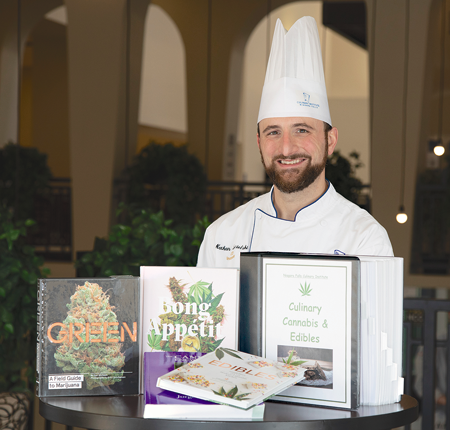 NFCI associate professor and chef Nathan Koscielski poses with his specialization certificate in culinary cannabis and edibles from the American Culinary Federation.

Chef Nathan Koscielski, a certified culinary instructor at the Niagara Falls Culinary Institute, was – much like Stanko – fortuitous in his plans to develop a culinary cannabis and edibles course. The inaugural semester of the program is underway right now.

“As an instructor of NCCC/NFCI, I always try to have a growth mindset; and I am always trying to say ahead of the curve so we can best educate our students not only for what they're going to be used utilizing in today's culinary world, but what ingredients – what equipment, what methodology – will they be using as chefs – as restaurateurs – five, 10, 15 years down the road,” he said.

“I’m born and raised in WNY. I feel an obligation to our community. … Recreational cannabis is popping up across the country and I want my students to be employable. … I truly thought it was hindering our students by not teaching them how to safely work with this very important ingredient.”

To underscore how unique the program is, last year Koscielski became one of the first 50 chefs in the U.S. to receive a specialization certificate in culinary cannabis and edibles from the American Culinary Federation. To date, NCCC is the only SUNY school to offer a culinary-centric cannabis course.

“When people hear culinary cannabis, I think that a lot of people think all we're doing is maybe just cooking with cannabis and having a lot of fun; eating a lot of brownies; when it couldn’t be farther from the truth,” Koscielski said.

He explained the curriculum is currently a math and science-heavy, lecture-only course, which covers topics such as extraction, concentrates, dosing, plant anatomy, and the human endocannabinoid system.

From flavor profiling to proper dosing, Koscielski said he knows of no other ingredient that requires as much mathematical preparation and skill than cannabis.

The culinary cannabis and edibles course does not yet include hands-on culinary training (although that is something Koscielski would like to explore if future legislation allows for it.) He said that, as the legislation surrounding the production and use of cannabis in a classroom setting becomes more lax, NCCC is poised to be, perhaps, the first school in New York to feature a holistic “farm to table” approach between its courses – wherein the ingredient would be produced via the horticulture side of things and utilized by the culinary side.

Koscielski, like Stanko, went on to applaud the college for putting faith in its instructors and allowing for them to create programs that are virtually unprecedented in Western New York.

Although the topic of cannabis may still be taboo for some, NCCC isn't about to let stigma get in the way of preparing students to be valuable members of this new industry.

Looking ahead, Ulatowski said the college is in the process of creating a supply chain management curriculum as part of its business program. She noted the horticulture and culinary programs will certainly factor into it, and, as the cannabis industry takes root in New York, that will, too. 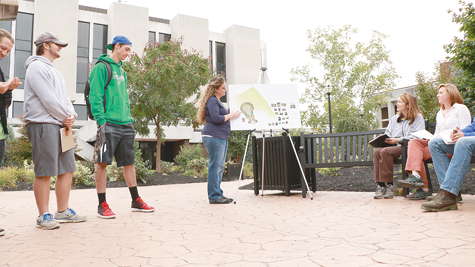