Construction is underway on the new wall for the bullpen behind the right-centerfield fence at Sahlen Field in Buffalo. (Photo by Michael J. Billoni)

Barring a monumental miracle by June 1, the Toronto Blue Jays will again call downtown Buffalo’s Sahlen Field home. The Canadian government has yet to grant them approval to return to the Rogers Centre. With COVID-19 cases on the rise in Canada, and Ontario recently entering another lockdown, it is unlikely the Jays will return to the field they last called home in 2019 anytime soon.

That is why Blue Jays and Buffalo Bisons officials have been working feverishly on making permanent changes to upgrade the oldest Triple-A ballpark with multimillion-dollar improvements. Front office staff members from both clubs are working on details to sell individual game tickets and suites for the first Major League Baseball games to be played in Buffalo with fans in the stands since the 1915 Buffalo Blues of the Federal League.

Bisons’ General Manager Anthony Sprague, part of the club’s front office team, is overseeing the transformation of Sahlen Field into an MLB-ready ballpark while his Triple-A Bisons prepare to open their Triple-A East season on May 4 in Trenton, New Jersey. He said individual game tickets will be sold at Tickets.com by homestand. He said the many contractors working on several improvements in the ballpark plan to be completed in time for the Jays’ five-game homestand against the Miami Marlins and Houston Astros beginning June 1. If they cannot meet the deadline, the Jays will move here from their Dunedin, Florida, spring training facility for a three-game series against the New York Yankees that begins June 15.

Sprague said ticket prices have not been finalized. Suites will also be utilized; however, a number of them are required by MLB for players’ families and the visiting and home teams. The remaining suites will be offered to current leaseholders first before those on a growing waiting list are called.

When tickets for MLB games in Buffalo were sold in 1915 to see the Blues play at Federal League Park on Northland and Lonsdale on Buffalo’s East Side, the club offered Pavilion seats for 75 cents and bleachers for a dime, according to the season summary in the recently released “Seasons of Buffalo Baseball 1857-2020” book (available at www.bisons.com). It’s fair to say Jays’ ticket prices will be considerably higher than they were 106 years ago.

“We have a significant waiting list already of fans interested in attending Jays games this season,” Sprague said. “Our loyal season ticketholders will have the first right to tickets and we will put them up for sale by homestand. We are operating on the premise that, when they allow the Jays back in Canada, they are leaving Sahlen Field and the Bisons will return home. We have no idea how long they will be here, but we are ready if they need to be here all summer and into the fall. Also, by selling only the next homestand, it gives us the opportunity to reevaluate everything from a change in capacity to how things went, etc.”

Mike Buczkowski, president of Rich Baseball Operations, is the liaison between the Bisons and the Blue Jays and MLB officials. Brian Phillips, the Bisons’ new director of operations, is working closely with Jays officials on field and service-level issues while Sprague and Assistant General Manager Brad Bisbing are assisting in all areas of the operation. Mike Poreda, the club’s veteran ticket manager, is working closely with Jays officials, and John Wiedeman of Tickets.com on those important matters. Jonathon A. Dandes, former RBO president and current corporate vice president for governmental relations and special projects for Rich Products Corp., is the liaison with city, county and state officials. By June, the Bisons/Jays will follow the state mandate of allowing 25% of their 16,600 capacity into the building, which will be 3,000-4,000 seats sold, providing the required safety distance of 6 feet. Fans will be required to wear masks and must show proof of vaccination or a negative COVID-19 test result within the past 72 hours before entering the ballpark.

Fans will not be permitted to use Consumer’s Pub, the ballpark restaurant on the second floor, because, for the second year, it will serve as the dining room for all Jays’ players, managers, coaches and officials. The Jays are bringing in their own chef, kitchen staff and servers to operate the facility. Because team officials must follow MLB quarantine guidelines, fans expecting to see the Jays or visiting players at Canalside, in local restaurants or on Chippewa Street, will be disappointed.

Sprague said, because of health issues, program books will not be sold and they are still waiting on word about vendors in the stands.

“We will find a spot for Conehead one way or another,” he promised.

Fans who used to see activity on the field before the game, such as first pitches, anthem singers and mascots, will not see that at any MLB or minor league games this summer because of COVID-19 precautions.

The Bisons will operate their concession stands and suites and are currently looking to hire 60-75 associates. More information is available at www.bisons.com. 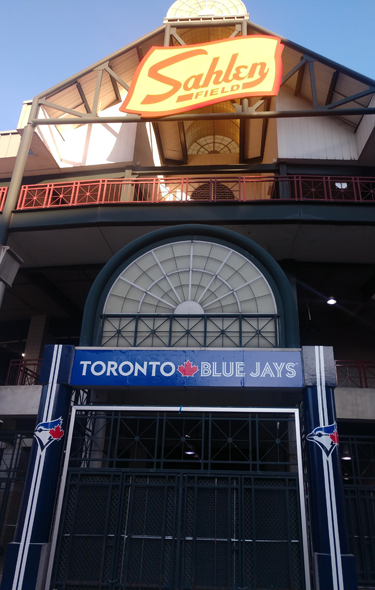 What’s New at the Ballpark?

Because of the worldwide, unprecedented pandemic in 2020, the Bisons Triple-A season was canceled. Unlike other teams in the league that shut their doors for the remainder of the year, the Bisons were planning to host the Jays’ depth squad. When it became apparent the Jays were not going to play in Toronto, they looked at various “homes” before settling on Sahlen Field, home to their Triple-A affiliate for the past 10 years. The Jays played 26 games here in August and September with no fans in the stands. They went 17-9 and qualified for the playoffs for the first time since 2016.

Sprague said he remembers what it was like when the decision was finally made for the Jays to play in Buffalo.

“They just turned on the burners, came in, and totally renovated for an August opening,” he said. “Every day, it was 8 a.m. to past 10 p.m., and for all of us. We had to move all of our belongings on the entire service level out and carry them to the suites, closets and concession stands. It was just physically grueling work that we were all doing to get it ready as quick as we could.”

Once the season was over and Bisons officials began looking forward to opening 2021 with their ballclub – giving Sprague the opportunity to truly be the club’s Triple-A general manager, a position he received in March 2020 – the Jays said, “Not so fast.”

“Last fall, they were not guaranteed of anything regarding this season, so they wanted us to start the ‘what if’ discussions if they could not get back into Canada again,” Sprague explained.

When it became apparent the Jays would open this season at their spring training facility in Florida for April and May games and move here in June until they could return to Toronto, the Bisons shifted their home games to Trenton. Under the agreement, they will be called the Trenton Thunder for home games, and nearly 1,000 tickets will be sold to the 10,000-seat unnamed ballpark.

Only Bison “home games” will be heard on ESPN 1520, with the Trenton announcers calling the games. Because of MLB’s travel restrictions, Pat Malacaro, the “Voice of the Bisons,” will not travel to road games, so no away Bisons games will be heard on local radio. However, they will be on the MiLB television network. Go to www.bisons.com for more information.

Since Triple-A ballclubs, under the new agreement with MLB, have to make upgrades to their facilities to better accommodate the players, Bison owners Bob and Mindy Rich and Buczkowski decided this was a great time to undertake those improvements. But in typical Rich Baseball Operations fashion, they did so in a big-league way.

According to Sprague, the Rich family has partnered financially with the Toronto Blue Jays on an aggressive “multi-, multimillion dollar” renovation of the service level of the 33-years-young ballpark, which opened in 1988 at a cost of $42 million. Unlike when the stadium was first built, this renovation project is not utilizing any city, county or state dollars.

Here is what’s being done for the 2021 Jays and for future Bisons games:

•The club has removed a large, multiroom area across from its current clubhouse on the first base line and is building a massive, big-league weight room and clubhouse with all the amenities of the modern-day MLB clubhouses for all sports. The clubhouse renovations continue into the former visitor’s clubhouse on the third base side. The Jays/Bisons will now use the third base as the home dugout.

•The Bisons’ former large clubhouse on the first baseline is being converted again into offices and lounges for the Blue Jays manager and coaches.

•In the parking lot and directly in front of the ramp that leads into the service level was the former grounds crew building. That has been demolished and replaced with a large building that will now house indoor batting cages and pitching mounds for the Jays, Bisons and visiting teams.

•The bullpens are being moved from the foul territory on the field to a new home being constructed behind the right-centerfield fences. That is a permanent change.

•More LED light bulbs are being added and, for MLB games, two new light standards are being erected.

•Similar to last year, a large, temporary portable facility will be built to house the visiting teams with a separate one for umpires. The club will probably start building this early next month. 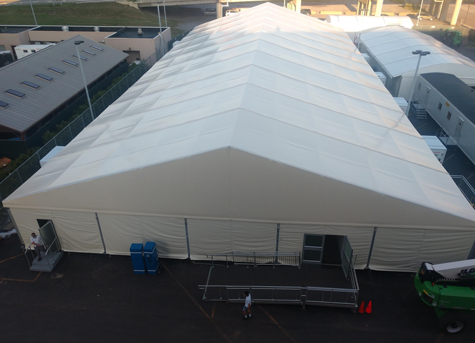 Shown is the visiting clubhouse in the Sahlen Field parking lot in 2020. It will be built again this summer. (Photo by Michael J. Billoni)

What has Sprague most excited about these renovations is the work provided to local contractors and their subs. Lehigh Construction is the general contractor. Others on the project include J.W. Danforth, Bawdy Construction and O’Connell Electric.

“When the Jays arrived here in August last year, we were all concerned about what they would think of the facility. A number of the players were here in Triple-A, but now they are here to play big league baseball games,” Sprague said. “They were very impressed last year and, from what everyone from the Jays are saying so far, they are going to be blown away when they see their Buffalo home this year. Everything is new and permanent and we know they will be impressed.”

What about the reaction of the Bison players, either sometime this summer or in 2022?

“Oh my God, we will have the best facility of any Triple-A franchise for our players. Players will want to play Triple-A ball for the Jays, because of what will we offer them in Buffalo,” Sprague said proudly.

For Bob and Mindy Rich, this has to be somewhat surreal for them. After saving professional baseball in Buffalo by purchasing the financially struggling franchise in 1983 and working with former Mayor Jimmy Griffin to get Pilot Field built and opened in 1988, the Richs spent millions of dollars in hopes of acquiring an existing MLB franchise (or obtaining one of the two expansion franchises that eventually went to Miami and Denver).

It would be ironic if the ballpark is ready for the Jays to begin play on June 1 against the Miami Marlins, the same team that played in the Jays’ opener here last summer – and the franchise that beat Buffalo in the expansion derby. If the Jays do spend the remainder of the 2021 season in Buffalo, the Richs will see 59 MLB games with the “Buffalo Jays” hosting 14 MLB teams, including six games against the New York Yankees, Boston Red Sox and the defending American League champion Tampa Bay Rays.

Fans can enjoy the games, all of the positive national publicity the city and ballclub will receive, and not be responsible for a nearly $150 million annual payroll. 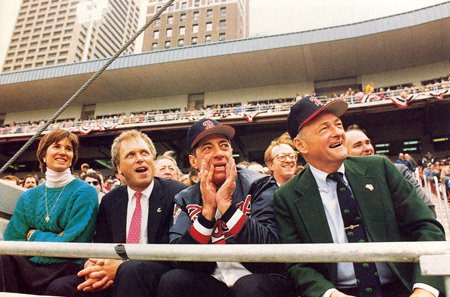