Grand Island High School varsity softball coach Cheryl O’Connor would have been happy enough just to see her team be able to play its home games on school property.

To do so on a brand-new, state-of-the-art facility exceeded her wildest expectations.

“I feel honored and excited,” O’Connor said. “This is the first time since the early 1970s, I believe, that softball will be played on school grounds. I’m so excited that softball is going to be here at this complex – we were always over at Vets Park. Now I feel like I’m going to be coaching a college team.”

There was always plenty of space behind the high school, but severe drainage issues made it impossible to play there – even after days with no rain.

That all changed on Monday when the school unveiled the new fields in a ceremony complete with ribbon and giant scissors.

“You made it possible to build this facility for our athletes,” Grand Island Board of Education President Ashli Dreher told the students and families on hand. “I can’t wait to see them use it for years to come. Our athletes work hard to be competitive and now they can showcase their talents on these fields.”

The facility is part of a $24 million capital improvement project for the school that also included upgrades and additions inside the buildings.

But the most obvious result of the project can be seen in the fields behind the buildings.

Adjacent to Gene Masters Stadium and the new concession stand is a top-flight turf softball field with professional-grade drainage. The outfield walls can be taken out, revealing a much-larger surface that can also handle football, soccer and lacrosse.

Lights have also been installed to allow for night games.

“We have this new multisport synthetic complex that will allow our teams to compete here at the school,” Grand Island School Superintendent Dr. Brian Graham said. “In the past, we sometimes had to send our varsity and JV teams off-island because the fields here were too wet to play sports. Now we won’t have to cancel games after it rains anymore.”

Graham added that the facilities will be available for rental to area youth and recreational leagues.

“I want to thank everyone that helped make this happen,” Grand Island Athletic Director Jon Roth said. “The coaches gave us a lot of great ideas – I think there are very few facilities that have the space for both turf and grass fields.”

Finally, the tennis courts were basically rebuilt from scratch.

Roth’s voice caught a little bit on this part of the presentation when he explained that it was decided (not by him) that one of the tennis courts be outlined in pink in honor of the memory of his daughter, Julie Roth Neville.

A standout athlete, coach and teacher at Grand Island, Neville died of breast cancer in 2018 at age 40. 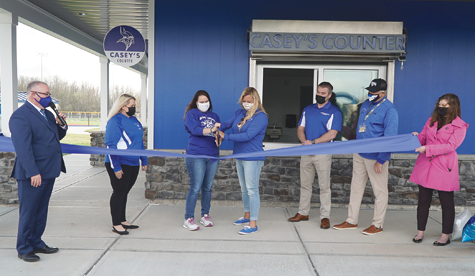