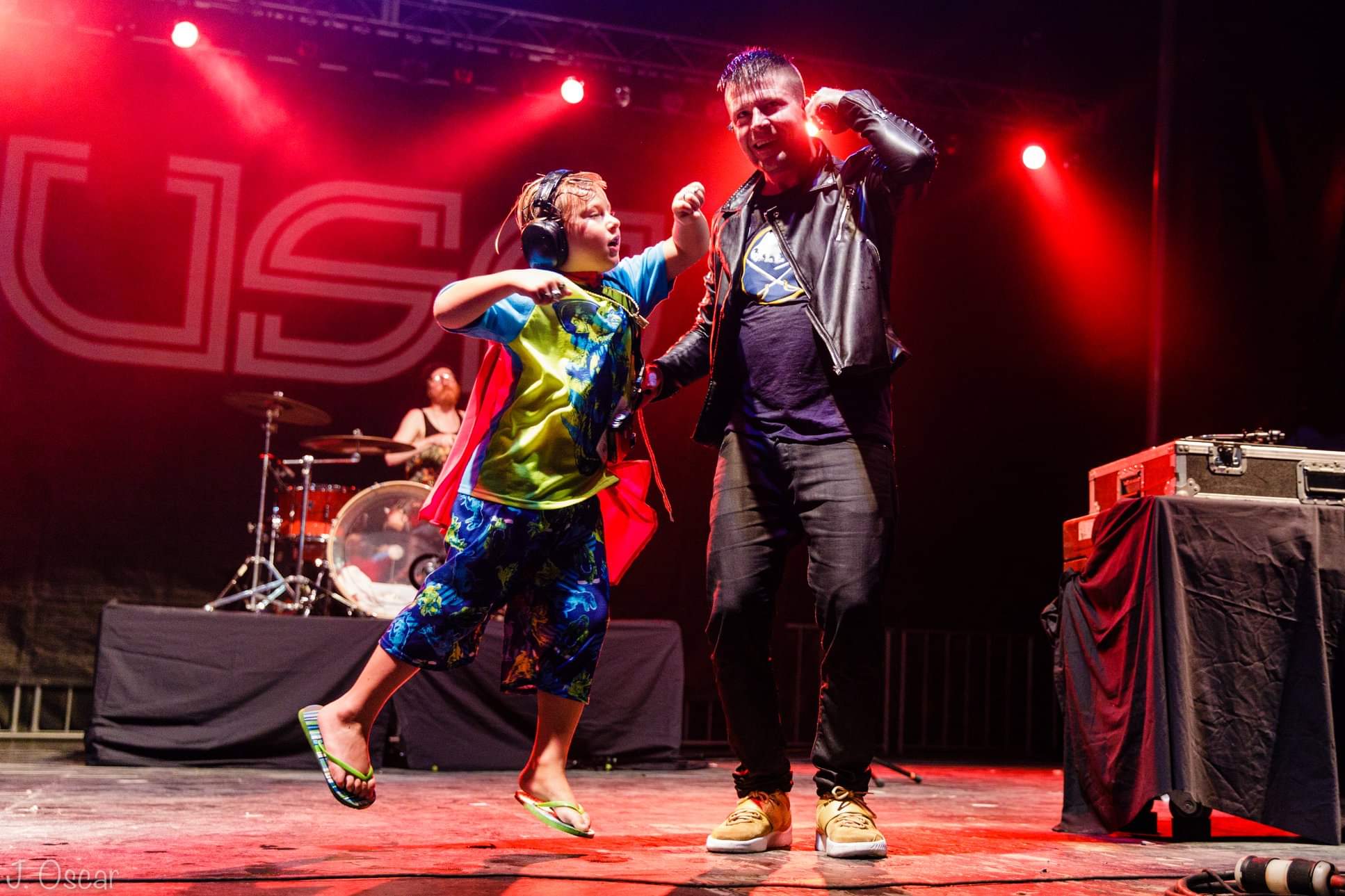 "Jam Man" on stage with Jason Parsons of USS in 2017. (Photo credit: www.rockingwithJamMan.com)

That's because most 9-year-olds aren’t as rad as Town of Niagara’s Remzi “Jam Man” Yates III.

Since starting his own YouTube channel and website (www.rockingwithjamman.com) a mere five months ago, “Jam Man” has begun making quite the name for himself in the entertainment news world. His interviews have been picked up and reported on by numerous well-known outlets, including Blabbermouth, Loud Wire and Ultimate-Guitar.com.

While there’s a novelty element in the idea of a 9-year-old talking to stars and celebs, “Jam Man” isn’t a novelty act. His recent interview with Tony Todd, star of the “Candyman” horror film series, was reported-on by Cinemablend.com as Todd revealed some breaking news regarding Virginia Madsen’s (protagonist of the first film) involvement in the upcoming reboot co-written by Jordan Peele (“Get Out,” “Us”).

Most recently, "Jam" got the exclusive that longtime Foreigner multiinstrumentalist Thom Gimbel is leaving the band after nearly three decades.

“Jam Man’s” thoroughly researched and sometimes hard-hitting questions have certainly caught a few of his interviewees off guard. He recently had a pointed conversation with Sevendust drummer Morgan Rose about the band’s experiences with racism and also questioned Lamb of God frontman Randy Blythe about a manslaughter charge he faced in Prague stemming from the death of a fan at a concert.

As to how all this got started, it turns out a knack for entertainment news is something that runs in the Yates family. “Jam Man’s” father, Remzi Yates II, is himself a veteran entertainment journalist and founder of Sofa King Cool Magazine. Yates II started bringing his son to concerts and events from an early age. As the boy’s curiosity grew, his father helped foster it by letting him ask interview questions and take photos.

“My dad would take me to comic-cons or concerts and take me backstage and I’d say, ‘Maybe you should ask this,’ and then he told me, ‘How about you go ask them.’ And I did and they said I should have my own show and I just got used to it. My dad got me some photo passes and so I took some pictures,” “Jam Man” said.

“Sometimes at shows I’d get an extra photo pass and I'd give it to him and have him take pictures up front and he's gotten such amazing shots,” Yates II said.

“The guy from Foreigner, the lead singer, put the microphone right in his face. It’s like the most amazing shot because there’s all these photographers fighting to get a picture and this little guy, like, in between everybody just getting the perfect shots of him from the crowd. It's amazing. He did such great work and now, when stuff starts back up, he'll be doing all that for his own channel."

While "Jam Man" is quick to thank and credit his publicists Allyson Song, River Jaynes, Jon Freeman, Shannon O'Donnell and Hadlee Wolfram for helping to book interviews, it's evident that his subjects both respect his journalistic prowess, and have a great time being interviewed by him.

“I think that's kind of the thrill for when these people are doing the interviews with them, they don't expect a little kid to be asking these great questions, you know?” Yates II said. "A lot of these bands even say this is one of the best interviews that they've ever did and they're being quite honest."

When asked if he ever gets nervous, “Jam Man” says he doesn’t. Having grown up in this environment since he was very little, he says once he starts asking questions he’s completely at ease. Yates II says there is also, due to his youth, a bit of natural naivety that lends to that courage and tenacity. Often, he says, “Jam Man” doesn't realize just how famous some of these people are.

“ ‘Jam’ was at Niagara Falls Comic Con and was having a conversation with Michael Barryman from ‘The Hills Have Eyes’ and Michael was telling him about how he was bullied as a child and to never let anyone get you down,” Yates II said. “ ‘Jam’ mentioned to him that he was trying to talk to some older kids that day and they started to pick on him because he was younger and ‘Jam’ said that his friend stepped in and yelled at the kids for bullying ‘Jam.’ Michael said that was nice of your friend and asked if he was ‘Jam’s’ age. ‘Jam’ replied, ‘No; his name is Marky.’ ”

Marky, as it turns out, was punk legend Marky Ramone.

“It was funny because Michael was sharing a private moment and ‘Jam,’ so naturally, just mentioned Marky like he was just a regular guy, not a punk legend,” Yates II said. 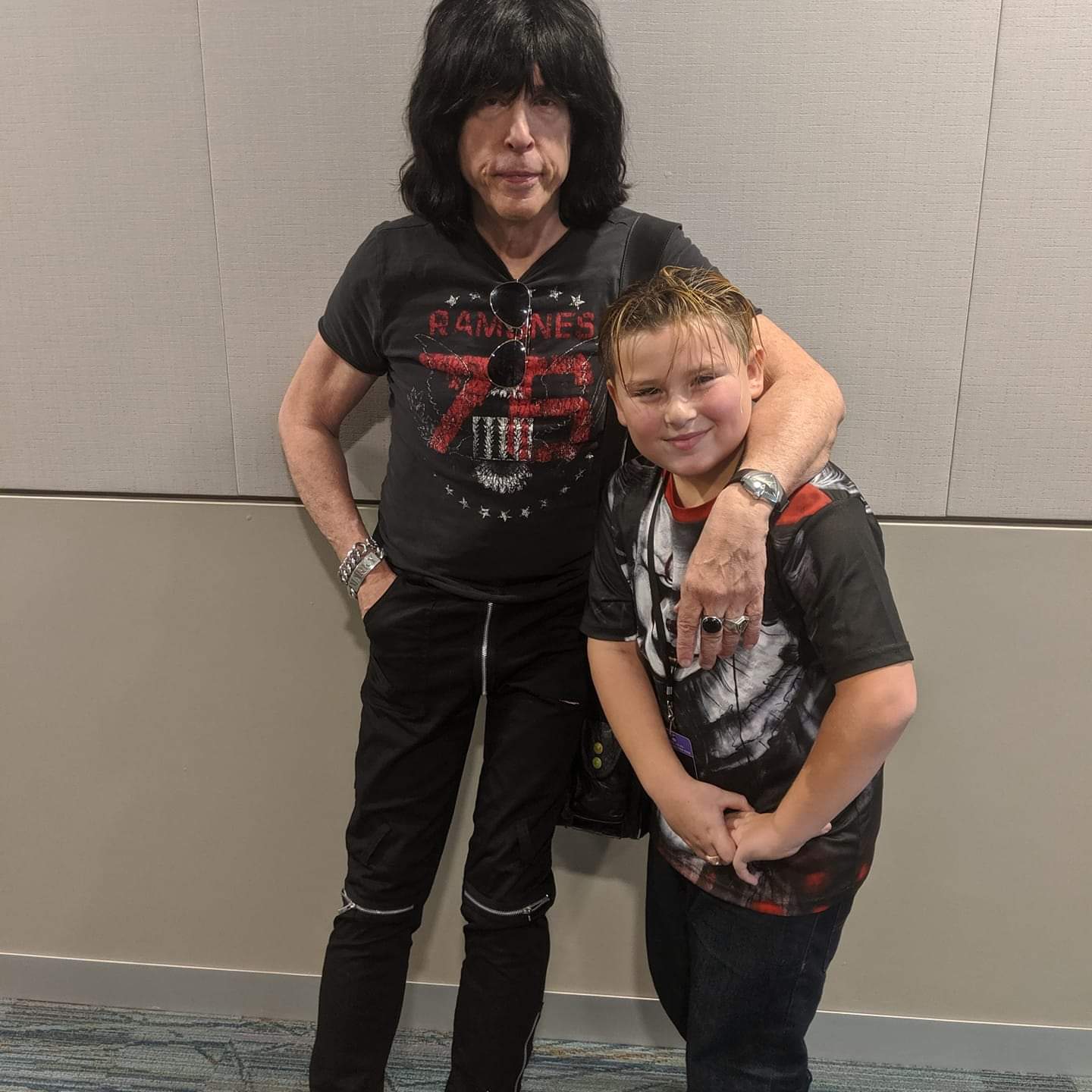 Outside of his channel, “Jam Man” lives basically a typical life for a boy his age – or at least as much as the pandemic will allow. A regular day includes school, homework, video games and researching his next interview. He says the channel has provided both a distraction and a creative outlet that has helped him deal with the challenges brought on by COVID-19.

“My site really helped me get over the COVID-19 blues and gave me something to do,” “Jam Man” said. “Plus, it taught me how to do research, how to network with the music industry, how to talk with people and ask the right questions. It taught me how to keep a schedule, and I really think it helped me learn new things about music and film.”

Somehow, the channel might not actually be the coolest thing about “Jam Man.”

According to his father, his love for charity work started at a very young age.

“For only 9, he's such a great kid; big heart,” Yates II said. “For his 5th birthday, I took him to New York City. He'd never seen a homeless person before and that's what got him started in his charity work. He was like, ‘Dad what do we do? ... I got to do something.’ So the hotel that we stayed at gave out breakfast and lunch. He'd box it up and go out to the homeless; he'd spend the morning handing it out to people on the street. So ever since then, he's just been doing great things.”

This year, “Jam Man” is using his connections in the entertainment industry to do something truly unique for charity.

“I have an album coming out through The Label Group, who had me pick out classic rock songs, and bands from their record label are going to do covers of them. All the proceeds will be going to charity,” “Jam Man” said.

Yates II said it's been incredible to get to work alongside his son and watch him grow into such a smart, talented and, most importantly, caring young man.

“I mean, this is my best friend right here,” Yates II said. “We’re obviously closer than we were now that we get the bond over music. Like it was always great to take him to concerts … but to see him do what I do is amazing. Now, we just get to talk about, ‘Oh my god, you should ask them this question, or you should do that.’ He's bringing all these cool points and stuff up. It's really a great feeling.”

The “Jam Man” shows no signs of slowing down. He currently has interviews set up with (among others) Billy Sheehan, The Treatment from England, and concert promoter Danny Zelisko, the former chairman of Live Nation Southwest.