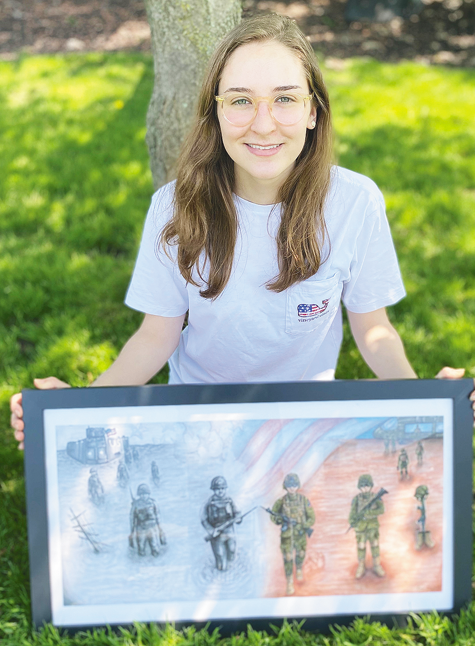 Morgan Schaefer with her drawing.

“The focus of my project was to honor and bring recognition to the sacrifices that the men and women who serve our country make every day,” Schaefer said about her plan for Girl Scouts’ highest honor. Wegrzyn, who led the team to design the DeGlopper Memorial, which will be unveiled on June 5, gave Schaefer a tour of the property and history of the project two years ago. “During my own research and of Charles DeGlopper, I envisioned a wonderful way to honor veterans of past and present in a drawing I would create,” explained Schaefer, a Girl Scout since second grade. She graduated from Williamsville South last year and is a 19-year-old freshman at Massachusetts Institute of Technology in Boston.

Her art piece consists of two halves: a black-and-white portrayal of soldiers on Normandy Beach in 1944, and on the right side, a colored portrayal of soldiers now in the Middle East. “The two sides are joined by an American flag in the sky above them,” she said. “The black-and-white side pays homage to World War II hero Charles N. DeGlopper, after whom the park is named, and who gave his life for this country in the Battle of Normandy. That side also serves to honor and remember those who served and gave their lives for the U.S. in any past conflicts. The colored side is a pair of boots, a rifle, and a helmet arranged in a way as to customarily memorialize fallen soldiers. “This symbol is a solemn reminder of the men and women who have given their lives in defense of this country since its foundation. By joining the two sides together under a faint American flag, the piece unites every generation of American solider under one cause. It is a reminder that our freedom is never free, and that those who have stood for centuries to protect it will stand for centuries more, regardless of the sacrifices they must honorably make,” explained Schaefer in a telephone interview.

Wegrzyn said the committee was so impressed with her final drawing that it will be mounted just like the 18 Killed in Action stantions at the southern end of the park. Her panel will be titled, “The Unknown Soldier,” which will signify all the soldiers’ who were not found and did not make it home, Wegrzyn said.

“Morgan is a very intelligent individual with a keen eye for drawing. The finished product speaks highly about her capabilities,” he added.

In addition to the drawing, her Gold Award project involved the creation of a website database of veterans’ charities and agencies in Western New York, with the goal of raising awareness for the struggles veterans face beyond active duty and encouraging those struggling to seek help.

“I was inspired to take this route for my Gold Award for a few reasons,” she said. “First, my country is something that has always been important to me, and I believe those who dedicate their lives to it are true heroes. I wanted to do something to honor every single person who has given their life, in one way or another, to protect this great country and its citizens, both in the present day and in the past.

“Secondly, a family friend is an Army veteran who served for many years in Afghanistan. This close connection made the topic of this project much more personal for me, and it inspired a lot of important aspects of it. I worked closely with him to tailor the website to best suit the needs of veterans, like him, who struggled after returning home from active duty. Receiving feedback from an actual veteran makes my art much more genuine and meaningful,” she added. The site is located at wnyvets.com, and Schaefer said there is a contact section on the site and encourages anyone to submit veterans’ charities or agencies.

Schaefer’s artwork joins the Boy Scout Eagle Scout project Ryan Wellence did for the park. He created the park benches, including a bench near the KIA Memorial for the Missing in Action soldiers. Mary Cooke, a member of the committee and former town supervisor, is impressed with the involvement of the Scouts.

“Keith Wegrzyn has done a yeoman’s job on all aspects of the DeGlopper Memorial, but leading the charge for the involvement of the Scouts has brought a new, young generation into action that is so vital to continuing these efforts to preserve and educate others about our history. Morgan’s artwork is a beautiful and fitting tribute to the unknown soldiers who gave their lives for freedom and liberty in America.”

Schaefer is a member of the ROTC at MIT and looks forward to serving her country in the future. She also looks forward to visiting the DeGlopper Memorial and hopes the DeGlopper statue, the KIA stories, the names of all Island veterans listed there, and her drawing will have an impact on the community and hopefully, inspire others to appreciate those in the service and the ultimate sacrifice made by the soldiers in the memorial and throughout history, she said.

“This art piece stands as a reminder that our freedom has only been guaranteed so truly and so deeply because of the heroic actions of every American soldier, past and present. I feel this project is the least I could do to thank them for their service and sacrifice to this nation,” she explained.