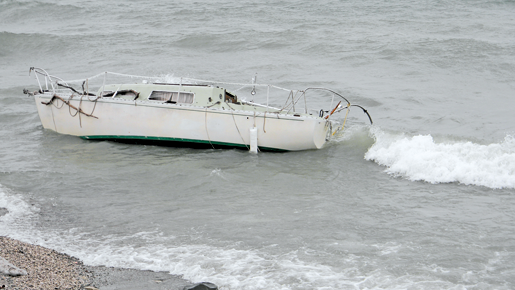 Saga reaches online and across the border; family responds

The saga of the little sloop continues.

Following revelation of the unfortunate sailboat listing on the shores of Lake Ontario off Fort Niagara State Park, various reactions have surfaced.

The Feb. 26 Tribune/Sentinel story went online and into Facebook, where writer reactions ranging from funny to concerned began to appear on different group pages.

“Free boat that will cheer you up!” Johnny wrote on his FB post. “I think that is how salvage rights work (lol).”

“Beach it up and fix it,” Benjamin suggested.

“I feel sorry for the guy,” Mike wrote.

At this point, the little sailboat remains on shore and has fallen victim to the high winds and winter storms that have struck Buffalo Niagara over past days. Much of the Lake Ontario ice has moved off from the shore with the warmer temperatures, and now the Grampian 26 surely appears to be struggling, with its keel banging on the rocks and water cresting into the cabin area from the lake’s pounding waves.

“Only a matter of time before there’s nothing left of this poor Grampian 26,” wrote friend Josh Stack, a Youngstown resident and boating expert on his Facebook page on March 1. “She’s been sitting on the beach for a week now.”

Following the Tribune-Sentinel’s report, the Niagara-on-the-Lake Local, which had carried an earlier story, noted our interest.

“Folks on the other side of the border were as curious about the lone sailor and his boat as we were,” Penny Coles wrote.

That Local report was carried online in Canadian media and went on to strike a response from the family of the sailor, which resides in London, Ontario.

“This is my son’s boat, and he has been transferred to a London Hospital for continued treatment,” Dave Tonner wrote in an email to me. “Do you know anyone who can bring the boat back to Ontario or at least a place it (and) can be kept safe until better weather to return it? I don’t know how it became unmoored from the NOTL Sailing Club. I am not a sailor and do not own a boat.”

A suggestion was made to contact the U.S. Coast Guard in Youngstown. The concerned parent had already gone that route.

“They said they won’t recover his boat, when I asked them last month,” he responded. “Even C-Tow marine salvage said that they don’t have a franchise in that area, as the closest is in Albany. I wonder if the fire department could help get it to a secure location? I don’t know what to do.”

As one who is into all things boating – and seeing this struggling vessel – I also began to feel for this guy. I immediately thought of my friend Josh Stack, mentioned earlier, who is an expert boat mechanic. He was among those working with the Village of Lewiston DPW installing the new ice boom off the Water Street docks last week. Stack works with Shoreline Innovations, a marine consulting company in Youngstown whose services include towing.

A text to Stack found he shared my concerns.

“It’s gonna be a nightmare,” he responded when asked of any chance of him doing the rescue. “Also it’s probably got some pretty big holes.”

Stack went on to give me his contact info, so a call went out to Tonner to give him an update and see if he would be interested.

He explained his sailor son remains in the hospital and the family is trying to work with him to better his health. He sounded optimistic and indicated he would contact Stack.

And he went on to thank me for the interest on this side of the border and the hopeful assistance this newspaper could provide.