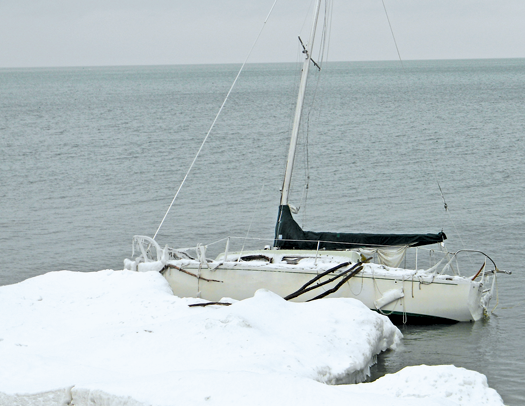 The saga of little sloop: Mysterious sailboat found on beach at Fort Niagara

Those hiking the meadow beach area at Fort Niagara State Park last week saw something strange on the shore. Amidst the ice floes, a small, abandoned sailboat was seen bobbling on the eastern end with the waves.

This little sloop had managed to break free from its mooring across the river earlier at Niagara-on-the Lake, Ontario, and drifted across into U.S. waters. Law enforcement on both sides of the border said they are fully aware of it.

So what’s the story with this sailboat?

According to a recent online post on Facebook by Youngstown sailing enthusiast Aaron Dey, the unfortunate-looking vessel belongs to a Niagara-on-the-Lake man who apparently encountered some difficulties in his own personal life.

“This little Grampian 26 sailboat was the home to a man who created quite a buzz on social media after anchoring in the lower Niagara River in Canadian waters starting prior to the American Thanksgiving in November. The gentleman identified as ‘John’ suffered from some issues and remained there through freezing conditions before having the boat secured on shore in Canada, by rescue crews and good Samaritans,” Dey wrote.

The man was apparently attempting to live on the boat that anchored at various locations on the Canadian side of the lower Niagara River mouth into Lake Ontario. Over past months, the man and the sailboat became a curiosity piece among locals on both sides of the border. While the man managed to survive on the vessel through late fall, as winter conditions began to develop, life became far worse.

According to an article in the Jan. 20 edition of the NOTL Local, a community newspaper that serves the Niagara Region in southern Ontario, the saga of the little, solitary sailboat began to take on a life of its own.

“A local humanitarian who has been helping the lone man living on the boat spoke to The Local on a couple of conditions. … He couldn’t stress enough how important it is that the man on the boat – he called him John – be left alone,” the NOTL Local story began.

“The story … is of a man who prizes his solitude above all else. If he is approached, he may feel threatened and decide to head back out into the river, and the good Samaritan who has taken him under his wing says that’s the last thing he wants to happen, after all the efforts to get John safely to shore.

“At this point he’s safe where he is, and should be able to stay there all winter.”

But things began to take a turn for the worse. According to the Local, John’s helper, “first went out to check on the boat and its inhabitant on Dec. 23, when it had been anchored in the river for about four weeks. He learned that John, who has an apartment in London, Ont., bought a Grampion 26, without a motor, from the St. Catharines Marina earlier this year, and that it’s his third such boat since 2018 – the other two were both run aground on the bottom of Lake Erie, in a shallow area in the same location near Long Point, where they remain.

The NOTL article continued, “He spent about four weeks at the Dalhousie Yacht Club, where some people who came across him referred to John as a savant. He quickly wore out his welcome, though, and after continuing efforts to get him to move on that involved the Niagara Regional Police, the Department of Transportation and the RCMP, he finally left. His plan was to sail to Pickering, to anchor by the nuclear generating station where the water wouldn’t freeze, but he didn’t get as far as Niagara-on-the-Lake without hitting the shore and damaging his boat. The day he had chosen to leave Port Dalhousie wasn’t a favourable day for sailing, so he decided to take refuge anchored in the Niagara River, where he stayed until late last week.”

Dey, in his online post last week, wrote, “After (the Lake) article appeared … ‘John’ found his way out to what is referred to as the Green Can, a mile out into Lake Ontario at the mouth of the Niagara River … in winter conditions probably the worst place to be. He was then directed back into shore and was secured to two docks at the Niagara on the Lake Sailing Club by club members.”

John was admitted to an Ontario hospital where he remains with undisclosed health issues. Later, the boat managed to break free and flow down river.

“The boat was somehow mysteriously released from its moorings and drifted into U.S. waters, where she found her way ashore this past weekend,” Dey wrote. “The boat is tied down to rocks lakeside at the base of the Fort Niagara Beach meadow area, where she is not considered a navigational hazard.”

According to U.S. Coast Guard Station Niagara, the owner has been contacted and USCG is awaiting its removal from the shoreline.

“We have been in touch with them; they will be removing it. There is nothing hazardous there,” a Coast Guard staffer said this week.