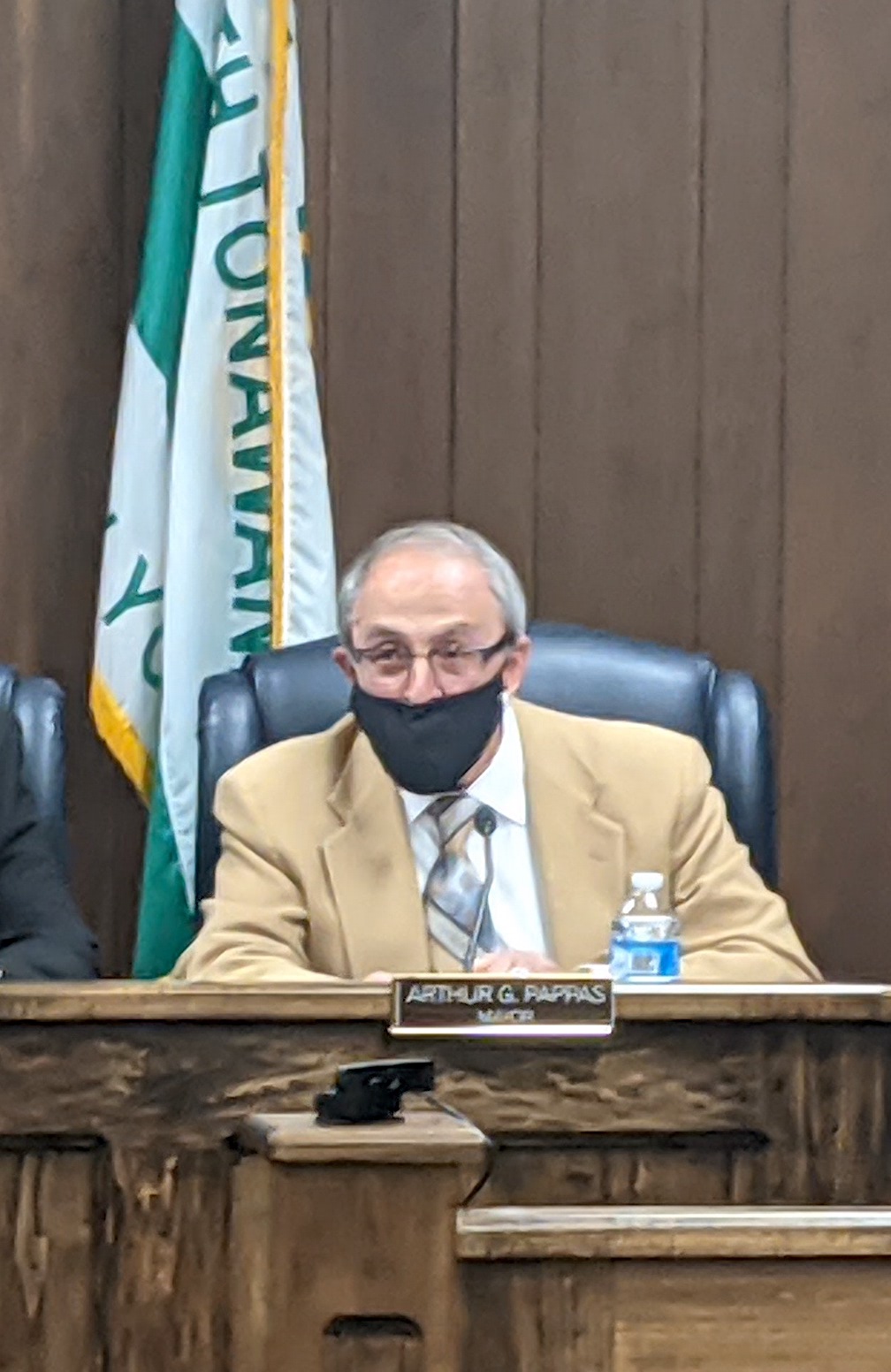 On Tuesday, North Tonawanda Mayor Arthur G. Pappas gave his 2021 State of the City address. It was his last such address as mayor, with his announcement last week that he would not seek reelection.

During his address, Pappas noted many of the construction and infrastructure improvement projects that have been completed in recent years, while also spotlighting some projects and developments that are in progress.

Some of the completed projects include construction on the Downtown Placemaking Project, which featured new curb bump-outs and street trees on Webster Street; new pedestrian safety improvements, including signals, crosswalks and ADA ramps at four intersections; an expansion and realignment of Charles Fleischmann Park; and new wayfinding signage.

Pappas also cited eight new dwellings that have been constructed; a 52-unit apartment building on Grant Street, which is now occupied; and a fiber optic facility on Erie Avenue, which is now complete. Additionally, reestablishment of the shoreline along Tonawanda Creek meant to support a higher-functioning ecosystem; and green infrastructure improvements along Main Street.

In total, Pappas said more than $24.5 million of construction work was done in 2020 despite the pandemic.

Some construction projects still underway include the connection of the existing bike path to the Empire State Trail, Niagara Riverwalk improvements, and the extension of the bike path from Mayor’s Park to the Botanical Gardens. Elsewhere, 16 four-unit residential buildings on Sweeney Street, three residential buildings consisting of 18 apartments on Zimmerman Street, and a proposed restaurant with small retail shop along with 15 residential units are found on Main Street. Plus, a Niagara Greenway Commission-funded clock tower in Webster Square is planned to be completed this year.

Pappas only briefly touched on some of the city’s financial issues that have arisen this year, including a scathing audit by the New York state comptroller’s office and recent property tax increases. As he has done many times in recent months, he assured residents the current budget established a “reasonable tax rate,” which avoided cuts to major services. He also indicated optimism that the city would receive a greater share of state AIM funding, rather than the proposed 20% reduction that drew ire from city officials.

“Unfortunately, since the COVID-19 outbreak, things have changed dramatically,” he said. However, we were still able to construct a new budget that ensures city services will continue at a reasonable tax rate. Contact with our state legislators to restore the AIM funding to its prior level has been made. We are always looking for different revenues and ways to operate more efficiently. The best financial practices as recommended by state auditors have been put into effect. Appeals have been made to the governor’s office to reinstate the aide that has been cut to municipalities since it directly affects all taxpayers.”

Pappas also noted some of the struggles city businesses faced as a consequence of COVID-19. However, he pointed to several new businesses that arose amid the pandemic as bright spots.

“Unfortunately, we did see the closure of some businesses due to the virus, but we also have some new enterprises underway with the opening of several barbershops and salons, (as well as) the Mana Bar, Black Heart Cafe, Erie Avenue Lumber City Winery and Bistro, Mayor’s Pizza and notably coming SPoT Coffee and a new, family-oriented casual Mexican restaurant as well as a wood-fired pizzeria, Pizza Amore, where the old Little Caesars stood will enhance business in town.”

In closing, Pappas thanked the Common Council and workers across various city departments for their support. He then passionately pleaded to the city’s future leaders to work together in order to allow the city to continue to build on its recent successes.

“It’s been my honor to serve as mayor of North Tonawanda, and I truly enjoyed meeting so many tremendous people who live and work here. I thank all city employees for their support in a difficult time,” Pappas said. “Working together, we have made strides, and, in the days ahead, we will continue to flourish. NT is a vibrant community, full of potential with many amenities that no other community has to offer.”

Further underscoring his point, Pappas ended his speech with a poignant quote from Henry Ford: “If everyone is moving forward together, then success takes care of itself.”

The full version of the address can be found HERE.

Beyond Pappas’ address, Tuesday’s meeting featured some other noteworthy announcements and developments.

The proclamation supports the “Stay In Your Home” campaign, a cross-sector collaboration of local legal assistance to nonprofits, municipalities, companies and banking institutions. Spearheaded by Erie County Clerk Michael P. Kearns along with members of the Erie County Zombie Foreclosure Task Force, the “Stay In Your Home” campaign seeks to address the “zombie home” problem across Western New York by educating homeowners who are either in an active foreclosure or merely behind on their payments about the right to remain in their homes until the full foreclosure process (including sale) is completed.

Western New York residents can contact the campaign for guidance and assistance by calling 716-828-8429 or visiting www.Stayinyourhomewny.com.

On a related note, the council recently authorized the mayor to enter into a contract with Belmont Housing Resources for WNY to facilitate a foreclosure prevention outreach plan, which will allow the city to better communicate and offer advice to residents facing foreclosures.

“Everybody walks on the sidewalks. We don’t just walk the streets; it’s not safe,” he said. “I don’t know how many areas I’ve walked through and I’ve seen numerous sidewalks not shoveled. Take care of those neighbors who can’t shovel or who have heart conditions; who are in poor health or elderly; and just be a good neighbor. Everybody will be safer that way.”

•The conversation made a nice transition to highlight the city’s Department of Youth, Recreation, and Parks’ new initiative: “Shovel Out NT.” The service will connect residents, who are unable to shovel their own walks or driveways, with volunteers who are willing to provide snow-shoveling services.

The department is currently looking for volunteer shovelers for the balance of the winter snow season. To volunteer, receive assistance or for more information, visit www.ntyouthcenter.com or contact Michelle at 716-695-8520, ext. 5510.