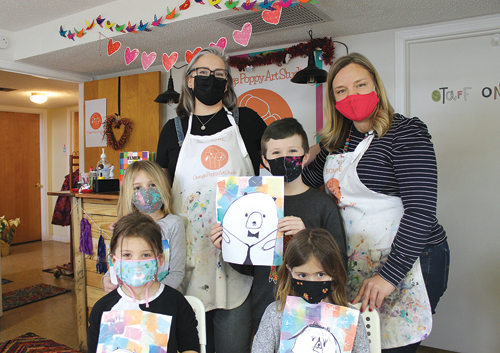 When artists Bonnie Nevans and Crystal Still, both of Grand Island, decided they wanted to start an art studio, the idea was born of hope and a vision.

“Our goal was to create a place for toddlers on all the way up to adults to not only teach art for those who are interested, but also just to provide a place for people to come even if they don’t consider themselves artists. To take a break from life,” Nevans said.

“We quickly bonded over our love of the arts. On our way to PTA events, we would kind of dream about, ‘Wouldn’t it be great if there was a place that you could go. … ” Nevans said.

They met at Sidway Elementary School. Crystal went on to become PTA president at Kaegebein and Bonnie became PTA president at Huth. Bonnie currently is corresponding secretary for Huth, and Crystal is fundraiser chair on the board of the Middle School PTA.

“My background is in art ed and Crystal’s background is in design, and marketing. We just kind of always envisioned the studio thing – it was kind of just a pipe dream for a while. And then we start to take kind of take it more seriously and said, ‘What if, maybe we can actually do this?’ ” Nevans said.

“So we started to actually look into it and things were looking good, like we were really going to get the ball rolling, and then COVID hit. And we’re like, well now is not a good time to start a business.” It was March, and the reality of the pandemic was changing how people conducted their daily lives.

“So we kind of put it on hold because, we’re like, no sane person in their right mind would start a business now,” she said. “However, around June we started thinking, ‘You know what? Maybe this is the time, because people are desperate for something to do, something fun, some way to interact, be creative and just have some joy!” Nevans said.

They started with some virtual classes in July, then some in-person classes as a summer camp workshop in August, following social distancing guidelines. In September, they moved into their current studios on Whitehaven Road at the corner of Baseline Road.

“When I was a kid, my favorite artist was Georgia O’Keeffe. She is very well known for these large flowers, and my favorite series of hers were what I know now as red poppies, but they were always the orange poppies, in my head,” Nevans said. “When I went to college and learned a little bit more about her, I heard a story about how when she went to New York City to pursue her career that she was so taken aback by how fast-paced it was. She was sad for people, because they were just going here and there and missing out on stuff.” Nevans explained. “She said she wanted to paint the flowers so large that the busiest New Yorker has to take the time to stop and appreciate its beauty.”

Still is also a huge fan of O’Keeffe. “We want this place to do for people what George O’Keeffe wanted to do with her flowers. We want people to stop and just breathe and do something different and connect with that creative side that they may not even know they have,” Still said.

Orange Poppy art classes started from a desire to help working parents whose kids were attending school in the hybrid model who are home three days a week. “We decided in September to offer a full morning art experience to come to once a week for three hours. Our hope was that the parents who are working from home could actually get some work done and know that their kids were not just sitting in front of a screen but interacting,” Nevans said. They decided to tie in some STEM activities, as well.

On some days, they study history. On some, they do science experiments. For example, on Feb. 5, they painted a polar bear, talked about the Northern Lights and did an experiment to show how animals can live in cold climates. They brought in snow, put it in a bucket filled it with water, and had the kids quickly dip their hands in to feel the cold. Then they covered the kids’ hands in Crisco and let them dip their hands in again. The Crisco – or blubber – insulated their hands against the cold. “They had fun with that,” Nevans said.

“We know that making Slime, playing with Play Doh is a pain in the butt. So send your kids your kids to us, we’ll do that with them. We’ll make the mess here. Get messy and we’ll do the cleanup,” Nevans said.

People can sign up for a one-time class or a regular series of classes. Nevans and Still like to provide opportunities for kids on school breaks or days off.

“We felt like there’s so much for kids who are athletes. There’s not a ton of options for kids in the arts outside of school,” Nevans said.

Their AM Art Experience class is open for kindergarten through fifth grade. And it has a Thursday or Friday option, to fit in with the hybrid model that Grand Island schools are in.

Parent David Abbott said his daughter, April, 6, enjoys the art classes. “She has been having a total blast here. This is a nice way to get her interacting with other kids when she can’t be in school. She brought home a lot of wonderful little art projects and seems to just be enjoying the daylights out of it,” Abbott said.

That makes Orange Poppy Art Studio’s duo very happy. “As parents ourselves, we have kids at home who are dealing with isolation and not being able to really see their friends as much as they would. So it’s an honor for us to be able to provide parents, and especially the kids a time and a place to have that back again for a while,” Nevans said.

Still especially likes working with the younger kids “Because their attitude is so positive. They come in and sing songs and smile and laugh and that makes me so happy when I leave here and then can take that home,” she said.

Still went to school for interior design. She takes care of the vast majority of the business side of the art studio. Nevans says that is a godsend. “Bonnie is an artist,” Crystal quips “I found that we really balance each other out,” Nevans said.

The interesting art challenge in working with toddlers, Still says, “To see their process. The challenge is not having the parents do it for them. Using scissors, using your muscles.”

“We’re big fans of process over product. We don’t care what it looks like,” Nevans explained.

“We want them to experience doing it,” Still added.

“Ninety-nine percent of the time, the product is better than you ever thought it could be. We’re not fans of everybody having cookie-cutter art. We want the kids to have the freedom to choose their methods,” Still said.