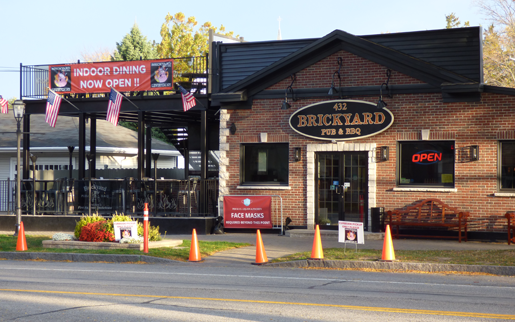 The Brickyard Pub & BBQ reopened after a fire damaged both its interior and that of the neighboring Brickyard Brewing Company. (File photo)

The Village of Lewiston Board of Trustees is hoping Center Street will qualify for future grant monies, now that the draft Local Waterfront Revitalization Program is nearly complete.

A resolution was approved Monday that stated, in part, “the Village of Lewiston initiated preparation of a Local Waterfront Revitalization Program in cooperation with the New York State Department of State in accordance with the provisions of executive law, Article 42. … The LWRP has been prepared under the guidance of the village, the Local Waterfront Revitalization Advisory Group, with consultant planning services provided by GHD Engineering. … (The LWRP is) complete and ready for public review, and shall be submitted to the New York State Department of State for review by regional, state and federal agencies.”

On the Department of State website, it reads, “An approved LWRP reflects community consensus and provides a clear direction for appropriate future development. It establishes a long-term partnership among local governments, community-based organizations, and the State. Funding to advance LWRPs is available under Title 11 of the New York State Environmental Protection Fund among other sources. …

Deputy Mayor Vic Eydt explained, “There was a group of us working on this – we’ve been working on it for seven years. We did most of our work within the first two years, and it’s taken the state the next five years; and going back and forth. We started with about a 22-page file on this draft resolution, and right now I think it’s about 150 pages that the state has added to it. We’ve been going back and forth – I’ve read it more times than I care to read.

“Basically, what this amounts to is extending local waterfront revitalization up Center Street, including Center Street and Academy Park. What this does is allows us to become more favorable with grants and whatnot. But it’s taken a lot of work.”

Mayor Anne Welch said input also came from past and present members of the Planning Commission and Zoning Board of Appeals, plus charter captains and fishermen.

She said, “This LWRP was originally done and adopted in 1989-1990. That was the original one that we’ve had for years. Now, the state wanted this complete update of it. That’s what this is all about.

“It’s not like we haven’t had it before; it’s just more in-depth now. We had a committee to work on it. This is the final draft.”

The measure passed by a 4-0 vote. Trustee Dan Gibson was excused from the monthly meeting.

Welch said, “That’s per the Town (of Lewiston). They raised the rate, so it passes on to us.”

A public hearing was held on this action, but no residents spoke.

The Year in Review

Welch read a prepared statement summarizing the past year.

“Well, 2020 started out to be very promising, but unfortunately the pandemic hit and everyone was effected by it,” she said. “Our thoughts and prayers go out to all the people and families affected by this terrible disease. With the new vaccines, there is now hope and light at the end of the tunnel.

“Our businesses were severely impacted, but they are resilient – and with the support of our local officials, residents and visitors, they have persevered and done surprisingly well through all of this.

“Even though we were unable to host all of the many festivals and events we have enjoyed over the years, people enjoyed time spent with their families, walking, biking, boating or just relaxing in the parks and waterfront.

“The pandemic slowed down the construction projects, but they are still on track to finish in 2021. The reconstruction of the waterfront was completed and reopened thanks to New York State Department of State grants and the REDI Commission award of $1.2 million – and phase five will start in 2021.

“The much-awaited restoration of the Frontier House … has begun. The Academy Park bleachers were removed and the bandshell will be relocated in the spring. We secured a $50,000 NYS DOT grant to rehab the Academy Park restroom. The construction of the all-inclusive playground at Marilyn Toohey Park that is made possible through grants and donations of $600,000 has been postponed until the spring of 2021 due to COVID restrictions.

“Center Street will be resurfaced in 2021 due to a $1.8 million award from NYS DOT (more on that below). We are currently working on a proposed bike trail in the Village of Lewiston with the Niagara River Greenway.

“The Village DPW was able to purchase several pieces of new equipment through grant funding.

“In spite of the pandemic, we have several new and relocated businesses, such as Tim Hortons, Quest, Alfonso Bax Esq., The Rose Hanger, Gallo, Gather, Aimee’s Just Desserts, Lewiston Love and a new façade at 555 Center by owner Zach Casale.

“After the devastating fire of Brickyard and the BBC, we are grateful that the Brickyard is open, and the BBC reconstruction is in progress and will reopen in 2021.

“I want to wish everyone a merry Christmas and I’m looking forward to a happy and healthy New Year.” 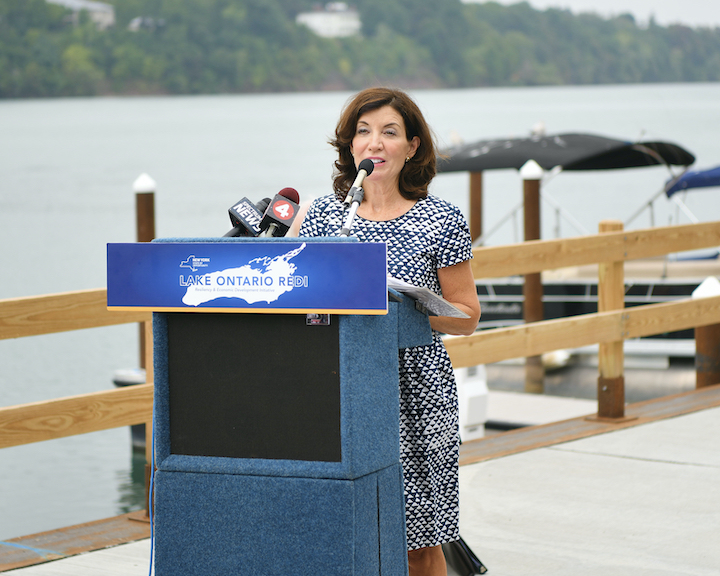 One of the highlights of 2020 in the Village of Lewiston was having Lt. Gov. Kathy Hochul keynote the waterfront ribbon-cutting ceremony. (File photo)

The Village Board scheduled a trio of discussions for its next monthly meeting:

Welch said the project will be “curb to curb.” DOT intends to replace some street signs as part of the process.

The mayor noted, “I had to give them a list of the festivals – tentatively, because we don’t know where the COVID’s going. Nothing is definite, as far as festivals yet. They will be putting bids out in June and then, by the end of the year, it will be repaved.

“We’ll have meetings before that.”

Welch previously said she would try and work with DOT to ensure paving doesn’t interfere with any spring or summer festivals.

“It backs up,” Welch said. “They know exactly what restaurant it’s coming from. We’ve had this discussion before, and said that the person responsible – the restaurant responsible – would have to pay for the cleaning of lines.

She noted, “Most of the restaurants are in compliance and they have sufficient grease traps to handle it. But there are a couple that still do not, and it causes quite the problem. … If it gets to the sewer treatment plant in the town, it causes a bigger problem.”

“We’re not really in a flood zone – we never have been – but we are still part of that flood insurance rate map,” Welch said. “We have to do this because, if there’s any flooding at all, then we would not be eligible for any funding from FEMA if we were not part of this. … We have to adopt a model law.”