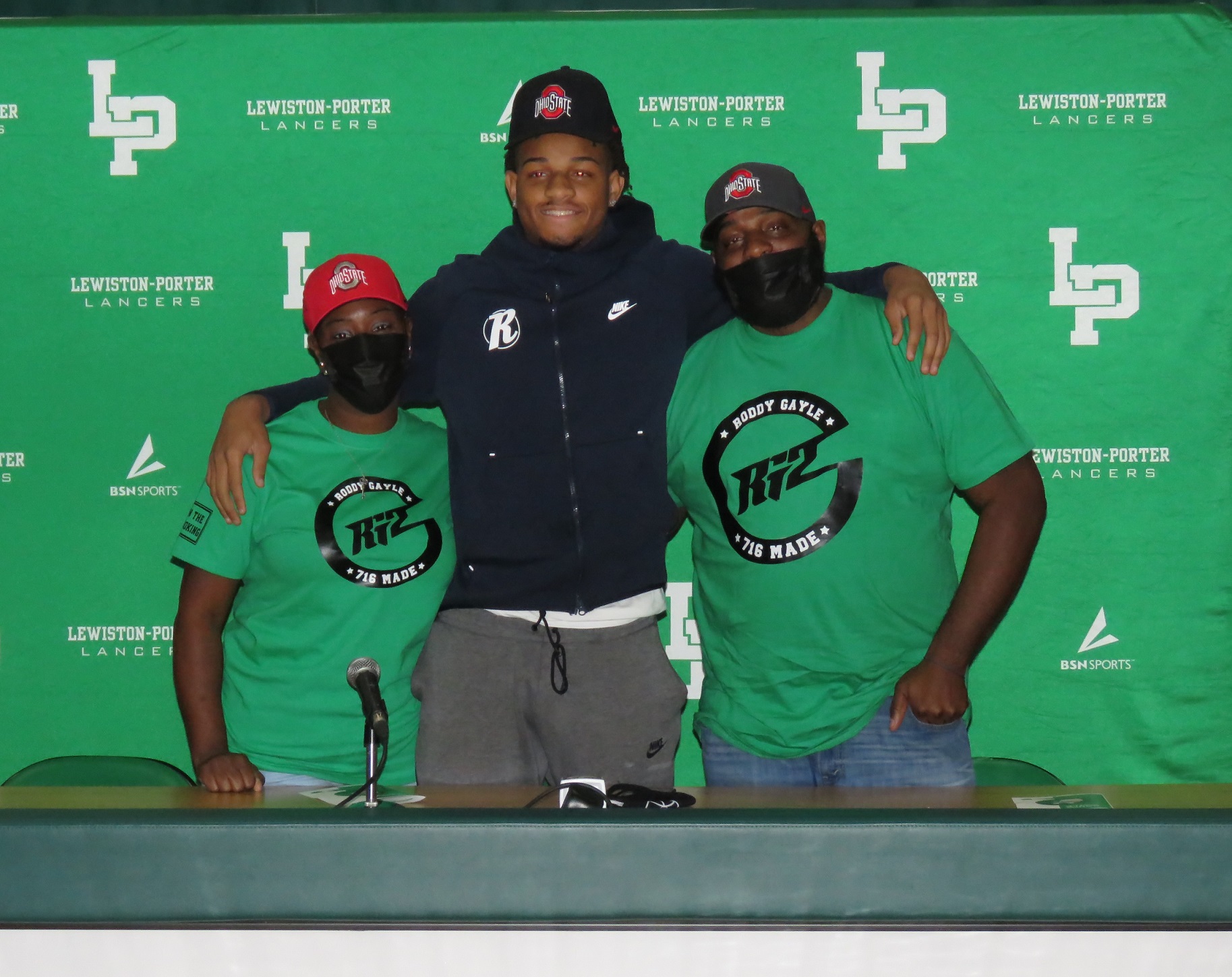 In a normal year, many local teams would’ve been suiting up for practice or games. But, with the COVID-19 pandemic in effect, and no end in sight for a return of HS basketball to the area, top WNY star Roddy Gayle Jr. announced he is transferring from Lewiston-Porter High School.

Gayle announced the decision to transfer to the Wasatch Academy in Utah at 5:10 p.m. Monday on Twitter.

The First Team All-Western New Yorker said in a note, “First off, I want to thank God, my family, coach (Matt) Bradshaw and the 716. You guys have made me into the player and person I have became. But I have decided to attend Wasatch Academy for the remainder of the year to further my game and education. #RG2 #StillInTheOverCooking.”

“My first initial thought, being selfish, I was sad. But I tried to explain it’s not really about Roddy the basketball player. Roddy is a better kid than he is a basketball player. It’s just the times we’ve spent together. We’ve spent a lot of time together in two years that he’s been here,” Bradshaw said. “In my opinion, this is a no-brainer basketball wise. This is the best move, regardless if we have a season or not, that he can make for himself. … I believe he’s got so much untapped ability and I think he’s going to shine and get even better in this process.”

Gayle, who recently announced his commitment to The Ohio State University last month, has been not just a top recruit out of WNY, but in the New York state. According to 247sports.com, Gayle is the Class of 2022’s No. 76 overall prospect, the No. 7 overall shooting guard, and the No. 1 rated prospect in New York.

Gayle started his high school career with Niagara Falls High School as an eighth grader. There, he helped the Wolverines win the Niagara Frontier League and Section VI AA title. After a transfer to Lew-Port, the freshman continued his success, bringing the Lancers the NFL title and the program’s first Section VI title since 1978. Additionally, he’s been named All-WNY First Team and the MVP of the Niagara Frontier League. In his sophomore season, he surpassed 1,000 career points.

Deciding to head west wasn’t an easy decision for Gayle, but with so much uncertainty whether the 2020-21 basketball season will be played here, the junior said it’s a move that had to be made.

“Definitely not being able to play basketball in WNY encouraged my decision moving west,” Gayle said. “I believe playing against the best and practicing with the best brings out the best. So that will help me as I begin to take the next step in life.”

Gayle isn’t joking when he said he’d play and practice with and against some of the best talent.

Wasatch Academy is currently the No. 1 ranked team in Utah and No. 11 in the country, according to MaxPreps.com, posting an 11-0 record. Additionally, the team currently has three players committed to Division I schools – Robbie Armbrester is committed to the University of Houston, Nolan Hickman to the University of Kentucky and Fousseyni Traore to Brigham Young University. Wasatch will also play top-notch prep schools from around the country including Oak Hill Academy and IMG Academy – two schools known for producing D-I athletes.

When Gayle committed to Ohio State, he said relationships with the team played a big part of his decision. The same connection existed with Wasatch, he said.

“I spoke to some of the players to get their honest opinion of the school and they gave me an honest answer and I appreciate that,” Gayle said. “So, once I heard from the team and coaches, I knew it’s a risk I’m ready to take.”

As previously stated, Wasatch is in the midst of its season already, so Gayle will have to work his way into the team’s scheme, which is something he’s prepared to do.

“Yes, they have played 11 games already. Not sure what the role is, but I’m going to go out there and play my game to my best ability and do what I have to do,” he said.

Something lost amid this is that Gayle is still only 17 and a junior in high school. A move across the country at a young age could be terrifying to some, and the two-year Lancer agreed that there are some jitters; but he has reached out to people who have made the move to prep school ball.

“It’s definitely frightening, especially for me because I’m a home/family kid. I never like to leave my family or home, so the most difficult part would be adjusting to the circumstances and my environment, but I think I can pick up pretty quickly,” Gayle said. “I’ve talked to Paul Harris and he told me about his time in Boston and how I’m gonna have to fight and practice every day to stay in the rotation. That’s what I’m ready to do.”

Harris was one of the top players to ever come out of WNY. The forward led Niagara Falls High School to a NYS and Federation Championship in 2004-05. Following that season, Harris transferred to prep school before heading to Syracuse University.

Despite Gayle only being 17, Bradshaw said he believed Gayle would transition just fine in his new setting.

“I think he’s very prepared for this,” Bradshaw said, noting past tournaments and basketball events that Gayle has traveled to without family. “Roddy is a very levelheaded and mature 17-year-old. I don’t know many 17-year-old kids that could make this move, but Roddy is one of them.”

Lightfoot’s Sunrise team is currently the No. 1 ranked team in Kansas and No. 3 nationally, according to MaxPreps.com.

Western New York took to Twitter Monday, curious if a matchup between the two local stars and friends could happen. The answer is yes.

Despite being thousands of miles away from WNY, Lightfoot and Gayle will square off. According to a Twitter post from Khari Demos of the Niagara Gazette, the matchup will occur Tuesday, Jan. 12. Gayle said he was excited for the matchup with Lightfoot.

“It’s very special and very intense every time we matchup. It’s crazy how two people from the same place play against each other on two distant schools. But it’s crazy how our paths keep crossing and I wish nothing but success for him,” Gayle said.

As Gayle heads toward the mountains of Utah to continue growing his game and education, he gave nothing but love to the people of the Lewiston-Porter community.

“Being a Lancer meant a lot to me. I wore green and white for everyone in the area, not just the team. And the whole community came together and supported me throughout my time here,” Gayle said.

Bradshaw added, “He galvanized the community since the first year he was here. … He was a huge finishing piece to that championship team. He’s synonymous with winning. Everywhere he goes, he wins. He comes in and we win an NFL title and Sectional title both in the same year. … And not just on the court, today he went around school and said goodbye to some people, teachers and people outside the basketball community that he cares about. Lew-Port has been a big part of his life and he loves it. … He’s meant so much to our school and he’s one of the most likable kids in school.”

Bradshaw noted, if Gayle ever needed anything while in Utah, he knows “we’re only a call away.”

Gayle said he hasn’t ruled out a return to WNY for his senior season.