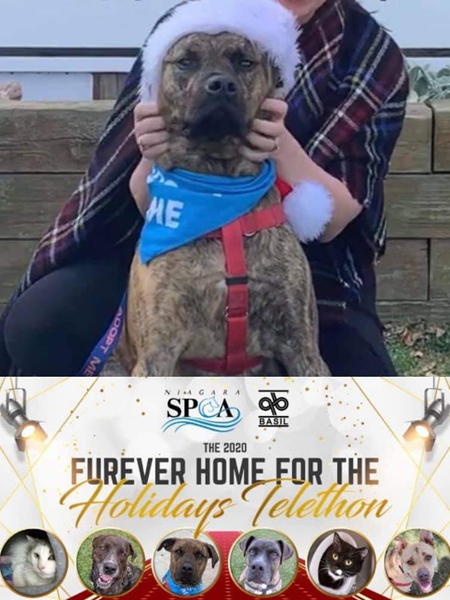 Pat Proctor invites the community to support the "Furever Home for the Holidays Telethon" fundraiser.

He may be out of the sky, but he’s definitely not out of the picture.

This past week, the Niagara County SPCA named Pat Proctor as its new director of business development. Proctor, the colorful local guy best known as an owner/helicopter pilot with Rainbow Air Inc., working with the company in marketing/sales – as well as a regional promoter for numerous tourism projects – joined the Niagara SPCA to guide that agency into the future.

“The board is thrilled to bring Pat to our organization. His expertise in the field of fundraising will take our shelter to a new level of excellence. With that said, we as a board know that we are outgrowing our current shelter. With bringing Pat on board, the reality of a new shelter is now in the foreseeable future,” said Susan Agnello-Eberwein, president of the board of directors at Niagara County SPCA.

Tim Brennan, who has served the SPCA as executive director, will continue with the agency in his new role as director of shelter operations.

Rainbow Air, a company Proctor owned with his uncle and stepfather, was acquired by Helicopter Transport Services, based in Ottawa, Ontario, in 2019. Proctor said he stayed on over the past year to assist the company through the transition.

“All is good; there’s just no helicopter for me anymore,” he said.

A familiar face in the Cataract City, Proctor has worn many hats over the years in his many promotional roles for the Niagara tourism and business community. He has made numerous local and national TV appearances in promotion of travel and tourism in Greater Niagara, and was among those recognized as a “12 Persons Under 40 Award” winner for Niagara County Business of the Year in 2017 by the Niagara County Small Business community. A current board member with the Niagara Falls Chamber of Commerce, he continues to serve the community as vice chair of the Tourism Board of the City of Niagara Falls.

Proctor, a true lover of animals, has been active with the Niagara County SPCA for some time. He served as a volunteer over the years in various SPCA fundraising and promotional events, including its “Sponsor a Cage” program, where he has been instrumental in the success of the adoption programs. For these efforts, he was honored as Niagara County SPCA’s 2020 Taylor Award recipient for his commitment and support of homeless and neglected animals in the community.

He spoke highly of the Niagara SPCA’s continuing transition to become the leading no-kill shelter in the Western New York community. He said he continues to be impressed by this success, one that has taken the Niagara County SPCA from the much darker times of the past that saw many animals unfortunately lost.

“Your eyes really open up on this, the emotion it has on the community,” he said.

Proctor said he looks forward to his new role in bringing the Niagara SPCA into the future.

“This opportunity to remain working close with the community is exciting, and now being able to work close with a proven winning team is even more exciting. For the last few years, the Niagara County SPCA has been building a strong, friendly and inviting environment that staff and volunteers want to be a huge part of. They continue to reach out and work within the community, and that selflessness is a main reason why I love the SPCA and what they stand for,” Proctor said.

His aim is to help make the Niagara SPCA even bigger and better on Lockport Road.

“It’s a major goal, a new facility, to be bigger, better. We have a new surgery center. It’s a great facility and location,” he said.

And once the border reopens with Canada, Proctor said he’d like to develop an even greater relationship for the Niagara SPCA with the Niagara Falls Humane Society in Niagara Falls, Ontario.

“I’d love to do that, expose us to an even higher arch,” he said.

Proctor closed by inviting the community to check out the Niagara County SPCA’s “Furever Home for the Holidays Virtual Telethon,” to be held from 6-9 p.m. Wednesday, Dec. 23, on Facebook.

Presented by the Basil Family Dealerships, the Niagara County SPCA will be going live on its Facebook page in an effort to raise funds for its no-kill shelter, and also to promote animal adoptions. The event will feature prize giveaways, live interviews with special guests – plus the SPCA’s lovely adoptable animals presented on the red carpet.

Proctor said the Basil Family Dealerships has offered to match any donations received by the community, up to $2,500.

“We hope to promote some of our longest residents in hopes that they might find a ‘Furever Home for the Holidays.’ Please help us reach our goal,” he said.

To visit, log on to https://fb.me/e/3hPSqG9nZ. Proctor noted residents are welcome to make a pledge early by texting 91999 to donate to the SPCA.