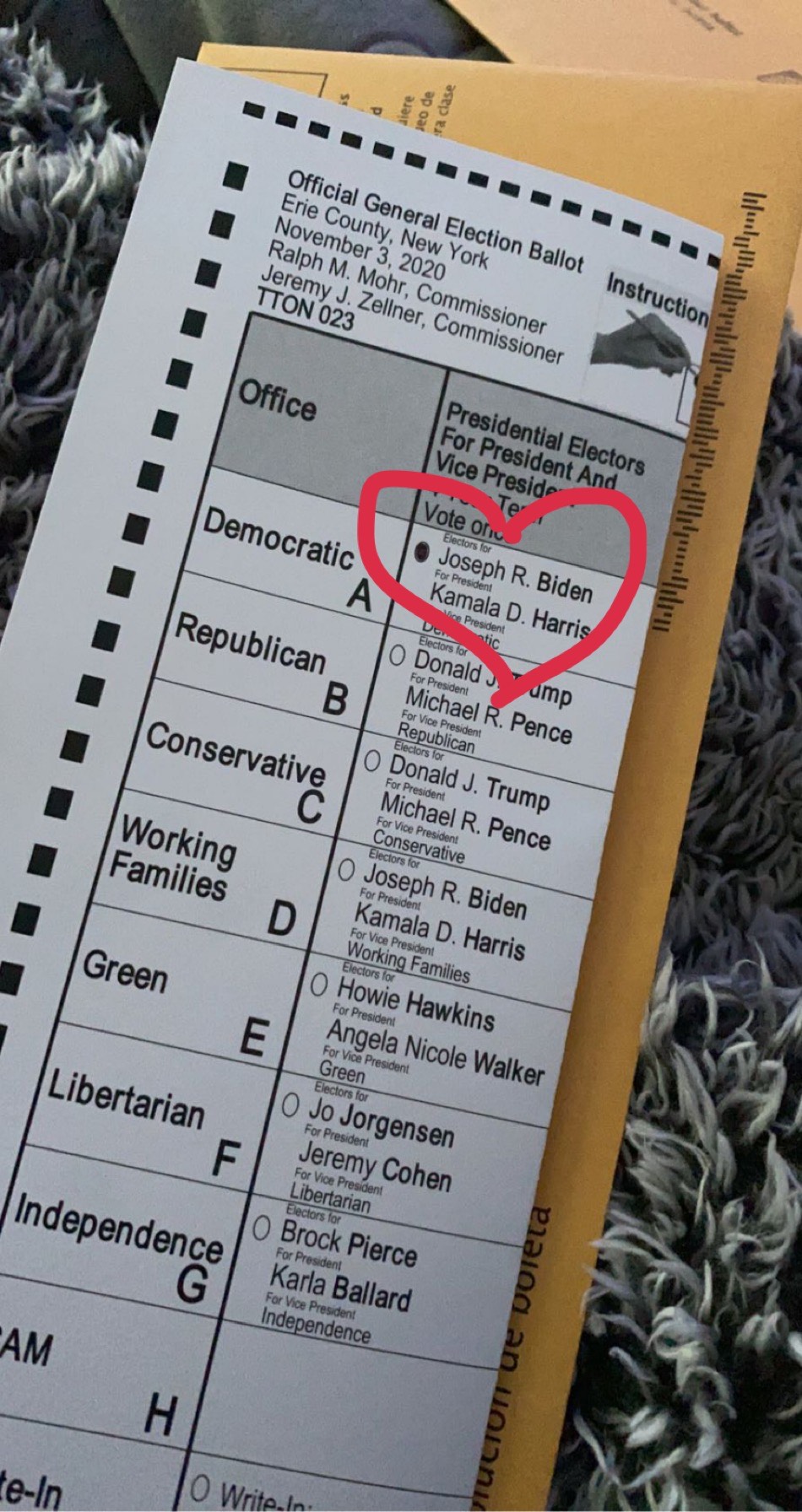 A ballot cast by outspoken Joe Biden supporter Selina Chavez, a freshman at the University at Buffalo.

With the 2020 presidential election seemingly coming to a close (although some legalities are still in question), the question to students across Western New York is simple: What are their thoughts about the election and are they more or less stressed with the presumed result of the election?

The election can be a stressful time for many across the country, especially for students as they are already preoccupied with their studies. Along with this most likely being the first election they are able to vote in, stress can be overwhelming (Vox.com).

This year’s presidential election has had the largest voter turnout in history. Along with that, this year’s generation of first-time voters has proven to be the most outspoken and passionate people in American history (Washington Post).

With this being said, many students are passionate about who they voted for and encouraged many others to do the same, as well. This generation of voters is strong-willed and has very strong beliefs.

Morgan “MoMo” Morehouse, a freshman at Niagara University. She is an outspoken Joe Biden supporter who is happy with the outcome of the election. However, she is disappointed with the reactions of the Republican Party and its supporters.

“I am very pleased with the outcome (of the election), but I am disappointed in our current president’s reaction to the results,” Morehouse said.

“I am also disgusted with the actions of citizens that are unhappy with the outcome because we should be coming together and not going against each other. I am less stressed because we now have a president who will take the virus seriously and respect human beings” Morehouse added.

“I believe the current government will have to do a lot of work to fix the past and make it better for us.”

Many have questioned the president’s reactions to the election and supposed “voter fraud” that has taken place, especially in the states of Michigan and Wisconsin. Possible voter fraud claimed by President Donald Trump has included:

√ More votes casted than eligible voters in the state of Wisconsin

√ Georgia turning into a blue state

√ Biden winning the state of Pennsylvania after coming back from a 700,000-plus vote deficit

•If you wish to continue reading about the potential voter fraud, here is a link to do so:

An outspoken Trump supporter in Anthony Aiello, sophomore at the University at Buffalo who strongly believes the election was rigged and Americans did not receive a fair voting process.

“The election was stolen from Trump” Aiello emphatically stated. “100,000 plus votes came over night and they were all for Joe Biden. There were tons of videos and pictures taken of people throwing out and burning ballots casted for the president. The election is not over; more and more evidence is coming out every day about the Democratic Party cheating, and all of the liberals are saying to just accept the results when they were the ones that showed their dissatisfaction with the results four years ago when Trump won fair and square,” Aiello added.

“I am not stressed out about the election. Trump is going to win as there is too much evidence of voter fraud and there’s no way the courts are going to just let that happen. I have full confidence that the legal process will benefit the president and the court is going to make this right”

Aiello is passionate about Trump and believes many of the accusations against the president are fabricated. He is staying positive for the remainder of the election and its processes as he believes Trump is the right man for the job.

Katie Strobel, a freshman at Niagara University. Strobel is hoping for peace between the political parties and is dissatisfied with the way the election was handled, along with the reactions of many after the unofficial verdict was determined.

“This year’s election, of course, did not go the same way as others have in the past and there is still so much uncertainty and ‘drama’ about the winner. This makes me feel more stressed, because the election showed me how much the two political parties (Democrats and Republicans) and their supporters are so against each other,” Strobel said.

“No matter who wins, there is always going to be a divide between the people who support the way the government is run and those who don’t. It is always good for people in government to see both sides of issues regarding politics, however, the way the different parties attack each other is not an effective way to run a country,” Strobel added.

Strobel continued to express her concerns with how America is being run today. She is hoping, that with all the struggles going on in the country right now with the pandemic and the social injustices going on, people can come together to battle these issues. However, she does not see this happening in the foreseeable future.

There are mixed opinions regarding the election this year. Many students are stressed that we may have elected an incapable candidate and are also stressed with how people are not reacting to it. There are also many others that seem to be content with Biden possibly being the new president and believe he is more than capable of running the country. Regardless of what people may believe in and who people support, it is important that all citizens come together as a sovereign nation to have peace amongst all and combat the problems our country is facing today.