Hope arises for bettering the boulevard

Frank J. Offermann Sr., the former Erie County sheriff and president of the Buffalo Bisons baseball club, was a prominent Grand Island resident back then and was quite active in getting the bridge sanctioned. After his untimely death in 1935 at age 59, the Bisons’ board of directors voted unanimously to rename Bison Stadium at East Ferry and Woodlawn Avenue on the East Side of Buffalo to Offermann Stadium. At the same time, then-Supervisor Jack Mesmer proposed changing the name of the boulevard to Offermann Drive. It did not receive board approval and the name of the new road remained Grand Island Boulevard, which was the connecting highway until the second bridges were built in the early 1960s. When the second bridges were constructed, the thruway’s Highway 190, which cuts through the center of the Island, was built.

“It is a microcosm of Route 66,” said Grand Island Town Engineer Robert H. Westfall, P.E., of Grand Island Boulevard, which begins at the first exit off the 190 North after crossing the bridge, continues around the traffic circle, through the center of town, and continues to the entrance of the 190 and the north bridges.

Recently, there has been considerable activity on Grand Island Boulevard, from the service road off the highway to the turning lane being constructed in front of Heron Pointe to the nearly completed, 1.2-mile sidewalk project on both sides of the boulevard from Webb Road north to just past the former Fantasy Island property.

The Island Dispatch has looked deeper into these projects and is beginning a six-part series, “Connecting Boulevard,” this week on the renovations and new builds occurring on Grand Island Boulevard.

The first four segments will concentrate on the service road off the highway to Heron Pointe, a stretch of the boulevard where we have estimated approximately $53 million has been spent since 2015 when Dave Mazur constructed the Nottingham Estate Apartments at 1955 Grand Island Blvd., followed by the $40 million two-phased Heron Pointe, which opened in 2018.

Mazur, a lifelong Island developer, has invested heavily in boulevard properties because, “I felt a momentum and a movement occurring on Grand Island Boulevard, and that was before the sidewalk project began.”

Last year, he spent more than $1 million in constructing a four-unit commercial strip at 1780 Grand Island Blvd., along with starting other projects north of Whitehaven Road.

Recently, Chris Taylor, 40, and Travis Smith, 36, owners of Certified AutoBrokers at 1693 Grand Island Blvd., announced plans to demolish their original building and begin construction of a $3 million showroom and an extensive service area.

Next door, at 1725 Grand Island Blvd., the former vacant motel was purchased by two equally young 39-year-old developers, Adam Serbert, founder and president of e2i Ventures, a development, energy and management company; and his partner, Eric Winstanley, founder and vice president. They both are Ransomville natives, Wilson High School graduates and now Lewiston residents. They paid $865,000 for the property and, when they cut the ribbon next month to open The Pacquin Apartments – 28 units focusing on the 55-plus audience – the project will top $1.1 million.

The lineup of stories for the series includes:

√ Dec. 4 – Heron Pointe Apartments and the opening of phase II 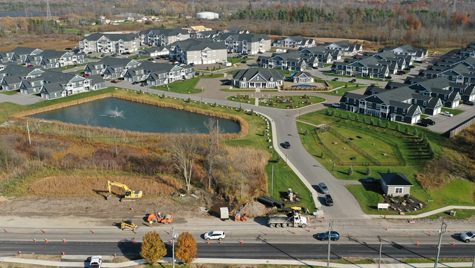 Richard “Dick” Crawford Jr., the town’s superintendent of highways, is a lifelong Islander and former Town Board member who is extremely excited to see so much activity occurring on Grand Island Boulevard, which he calls “The welcoming corridor to our beautiful community.”

While the boulevard may be the town’s welcoming corridor, Crawford has not been pleased with what residents, visitors and those who work on the Island see on both sides of the service road off Highway 190, north of the New York State Thruway.

“The aesthetic look as you enter Grand Island from the highway is very unappealing,” he said in an understatement for anyone who has experienced that ride. “Currently, the town’s Parks Department cuts a portion of it, the New York State Thruway Authority cuts when the grass on the left side is dry, but they do not trim it or pick up what they have cut – and that area never looks good. The Chamber of Commerce does a great job keeping the area under its welcome sign looking nice, and then we have the private owner at the corner whom we are trying to work with.”

Crawford convened a meeting in late September with officials from the Grand Island Parks Department, the state’s Department of Transportation and the Thruway Authority to discuss his concerns. He was pleased with the outcome and said they will convene again this winter to determine how the town can work with all parties to ensure that area looks more appealing. He said once an outline of a plan is developed, he will open it for public comment. Crawford would like to see the plan finalized before grass cutting begins next spring.

“My global view of the property is to make that patch on the left side appealing for all who are coming into our town. My hope is when we meet again, we can look at the oak trees former Supervisor Nathan McMurray had planted, and create more acceptable green space working with the state agencies. We will also work with the owner of the vacant building and ask him if he would continue cutting the grass and cleaning the property until it is sold,” Crawford continued.

When phase II of the Heron Pointe apartment project was approved by the Town Board in March of 2019, a stipulation before the 144 units in two-story buildings could open was an entrance on Whitehaven Road and a traffic study would be conducted by the New York State DOT because Grand Island Boulevard is a state highway.

As a result of the study, the DOT informed the owners of Heron Pointe they must fund the installation of a turn lane on the boulevard, because traffic going into the complex is hindering the traffic flow, according to Westfall.

“Heron’s Pointe had to interface with the DOT, hire its own consultants, design the road improvements and have them approved and then secure contractors to do the work,” explained Westfall, who said the town has no specific role in the project, but to “keep an eye on it.”

While creating the turn lane, they also extended both sides of the boulevard near the entrance and they also had to move the sidewalks and the storm receiver and pipes. The project was scheduled to be completed Nov. 1 and they are now saying it is close to completion. The project is expected to cost $750,000, according to Nick Cataia of Heron Pointe.

The $1.5-million project that saw 1.2 miles of sidewalk and upgrades to the curb on both sides of Grand Island Boulevard, from Webb Road north to just past the former Fantasy Island and a small patch of Whitehaven Road, is now completed and Westfall is extremely pleased with a couple of results from the project.

One is that it closed a number of ditches along the boulevard that were hazards for the walking public and tough for the town to maintain as they regularly filled with trash. Second, it has become a multiphased project. While everything was being dug up, they were able to have conduits put in place for future expansions, such as a decorative lighting theme along the boulevard.

Westfall and Whitney, the former town engineer, both agreed the sidewalk project achieved a goal they both envisioned: a walkable town center. “This new sidewalk system is incredibly user-friendly and that is what we have wanted in our town.”

In the future, they would like to see the sidewalk continued south on the east side of Grand Island Boulevard to Staley Road.

In the interim, phase II of the current sidewalk project is now underway – the installation of approximately 2,640 feet of 5-foot sidewalk along the east side of Baseline Road between Webb and the Grand Island Volunteer Fire Department headquarters at Grand Island Boulevard. There will be a public informational meeting about this project in the upstairs lobby of Town Hall from 5-7 p.m. Thursday, Nov. 19. For further information, contact Lynn Dingey at 773-9600, ext. 626.

“That improvement will create another walkable corridor, and that side of Baseline Road represents a lot of commercial businesses,” Westfall said.

He said the work is scheduled to begin in the spring and will cost $370,000, with $300,000 coming from a state grant. The Grand Island Boulevard sidewalk project was $1.5 million with most of the funds coming from the state.

Pete Marston, a Town Board member who, for 20 years, has owned Marston Power Equipment at 1970 Grand Island Blvd., is excited to see the activity on the boulevard, especially the sidewalks.

“It is certainly a step in the right direction of having a nice town center,” the lifelong Island resident said. “The sidewalks are a great addition, and it was forward thinking of us as a board to have the conduits in place to enable us to install streetlamps in the future.” 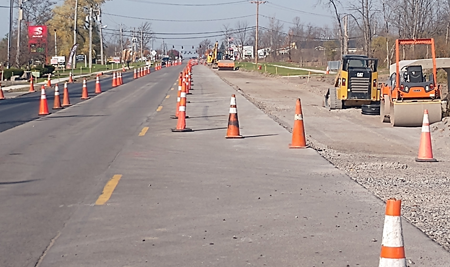