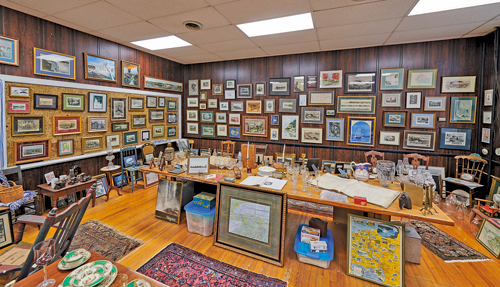 This has been a big year for acquisitions and received donations. The museum collection has now tripled in size. Earlier this year, I acquired some local artwork from the Cary and Baker estate collections. Also, another signed print from Thomas Hanover, along with some other rare engravings, which are on display in the village boardroom.

A handcrafted ship model of the USS Albert, a U.S. warship used in the Spanish-American War, was donated in memory of Edward Guzdek by his daughter, Elizabeth Sohe. There is also some new artwork hanging in the main hallway I recently acquired from a Lewiston estate collection.

Recently, the village clerk’s office now has a collection of my artwork hanging in the office. Also on display is a sewing machine from the hat factory that once occupied a Center Street building, a pair of ship lanterns used on the Lewiston Docks during the era of the steamships bringing passengers to and from the docks, and a couple of other Lewiston items. I have also acquired other artwork of the area, in which Sue Sullivan of Sue’s Frame of Mind has graciously restored for me.

Among other items are a collection of local history books about Lewiston from the Cary and Hobbie estates, as well as those donated by Jeff Morrow of The Book Corner and other various sources. I must add that Jeff has been an invaluable source in helping me to obtain new and old books for the library portion of the collection. 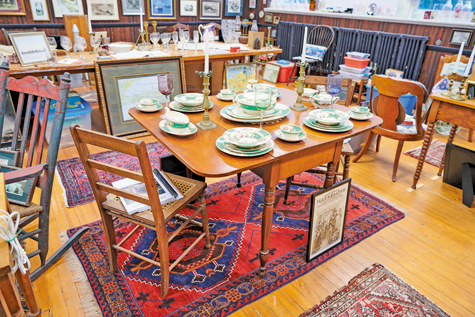 Newest addition is a dining table from the Barton House, circa 1800s, graciously donated by Judy Baker Munzi from her late father’s collection of local items. Currently on display, the wedding china of Mr. and Mrs. Augustus Porter the 5th, sits atop it. Also, I recently acquired a souvenir pillow, circa 1800s, handcrafted by the women of the Tuscarora Indians that were sold to the tourists from the 1880s until the 1920s. Lastly, Jeff was able to secure books for me tracing eight generations of my family heritage in Lewiston from 1793 up until the 1940s, to which I have continued from there.

Earlier this year, as village historian, I along with assistance from Tom Collister, curator from HAL, and Jeff Fleming of Boy Scout Troop 855, have begun the process of cleaning and restoring the village cemetery for the village bicentennial in 2022. The first phase has been completed with the Village DPW Department removing trees and cleaning the Cayuga Street hill. Hoping now next spring to continue on with the next phases with continued help from the Boy Scouts and the DPW.

I feel it is important to restore and maintain the final resting place of the early settlers to the village, as well as the residents of the village who were a part of Lewiston’s vast place and involvement in its nearly 200-year-old history that has transpired.

The museum is located on the second floor of the Red Brick Municipal Building, 145 N. Fourth St. It is open to public by appointment. Email [email protected] 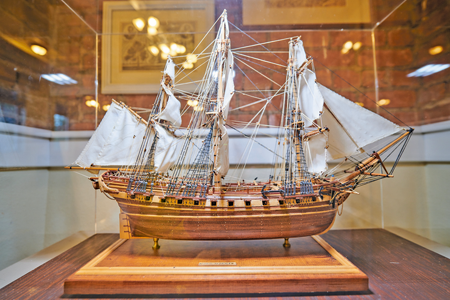