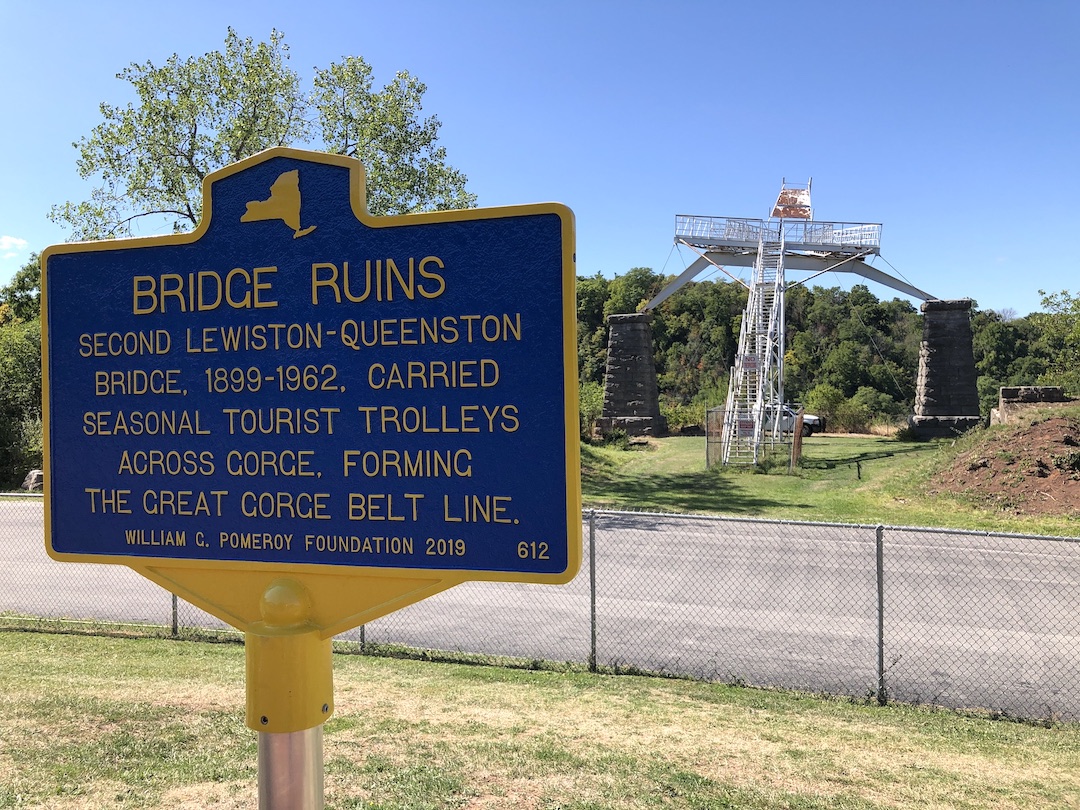 Artpark’s history was center stage as members of the Niagara Frontier Chapter – National Railway Historical Society Inc. and Railroad Museum Of The Niagara Frontier, in collaboration the Historical Association of Lewiston and Artpark State Park, unveiled two new historical plaques outside of the performing and visual arts venue on Saturday.

A press release noted the first plaque commemorates the Niagara Gorge Scenic Railway, which operated from 1895 to 1935 through what is today’s Artpark on its scenic route along both sides of the Niagara River, from Niagara Falls to Queenston and Lewiston. The trolley trip was a highlight for countless visitors to the “falls” – including President William McKinley, who rode the line Sept. 6, 1901. Unfortunately, a series of rockslides and other factors lead to the end of the attraction in 1935. A portion of the line’s route has since become a riverside trail on the American side.

The second plaque is located near the remains of the abutments of the historic bridge, which spanned the Niagara River between Lewiston and Queenston, Ontario, and over which the Niagara Gorge Scenic Railway operated. The bridge was constructed in 1899 and was replaced by the current structure in 1962.

Ball said, “The NRHS mission statement has three recurring words in it: preservation, restoration and interpretation. Of these, the one that provides the greatest educational value to the most people is interpretation. It takes many forms; the historic marker is only one of these, but a very important one. Once placed, it informs casual tourists and serious historians alike. It invites further exploration and research, and will be here for generations to come.” 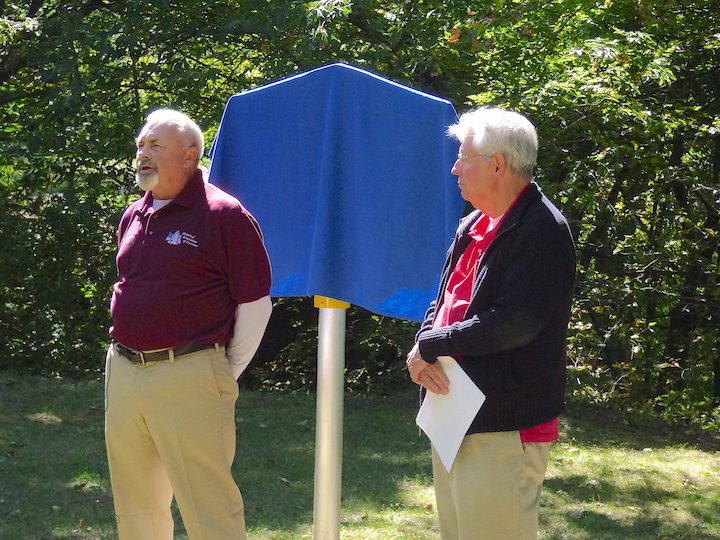 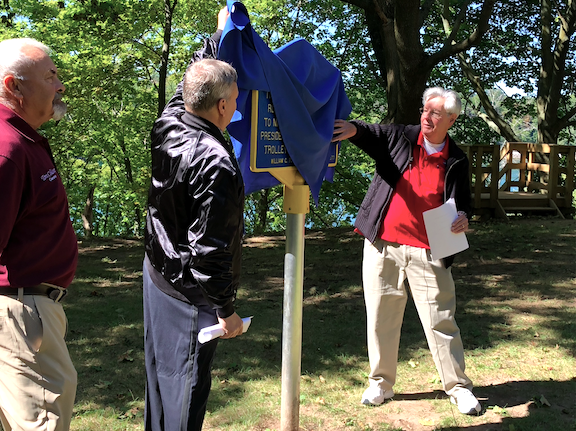 From left, Collister, Schwarzmueller and Ball unveil the first of two new plaques at Artpark. 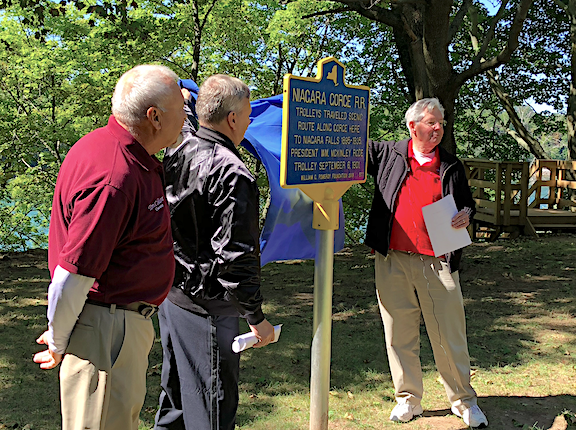 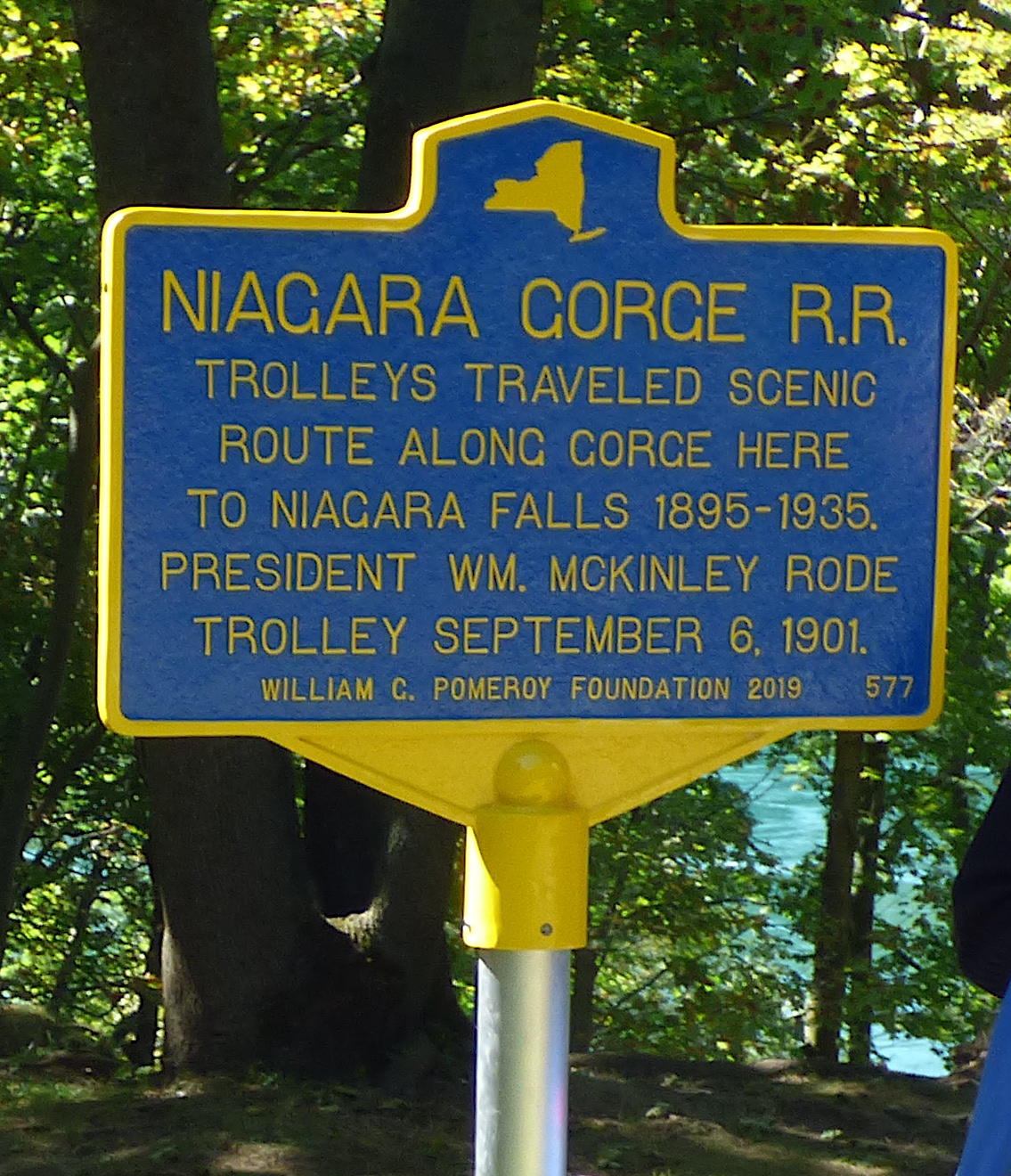 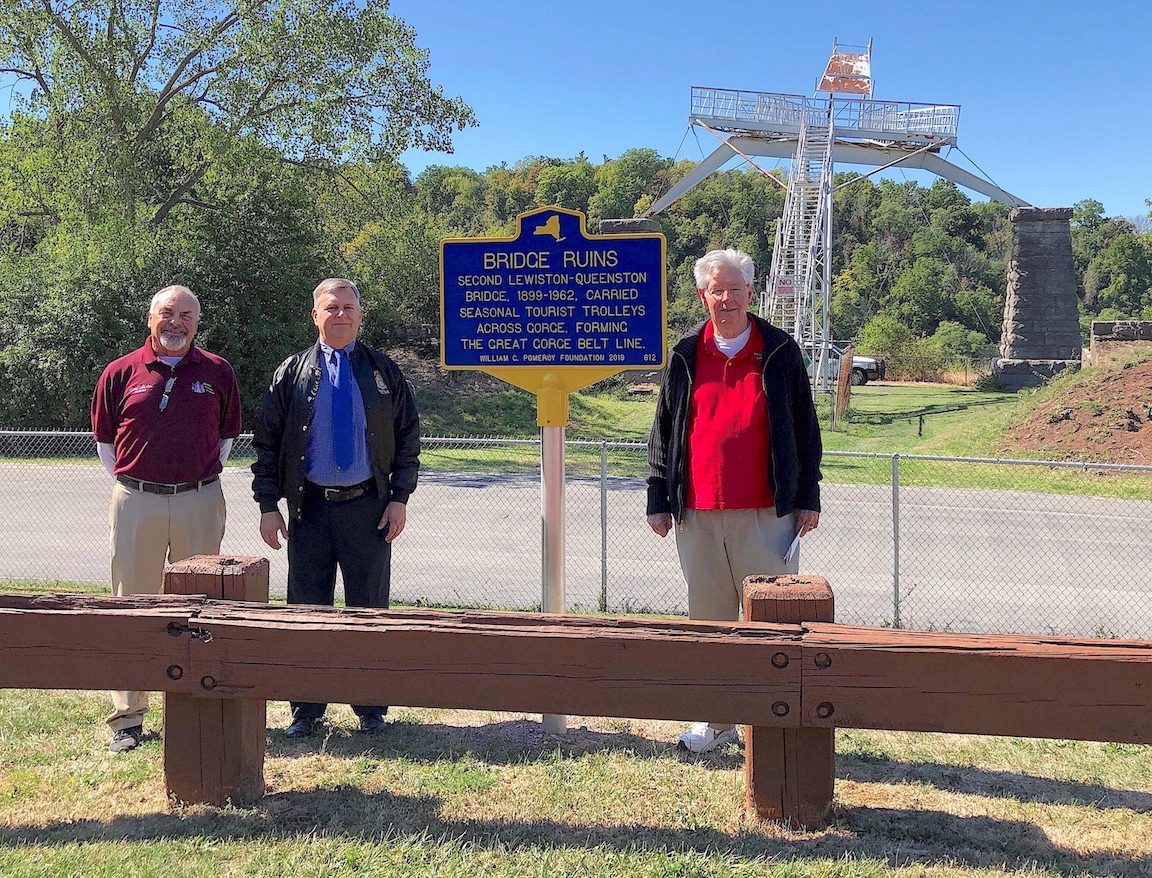 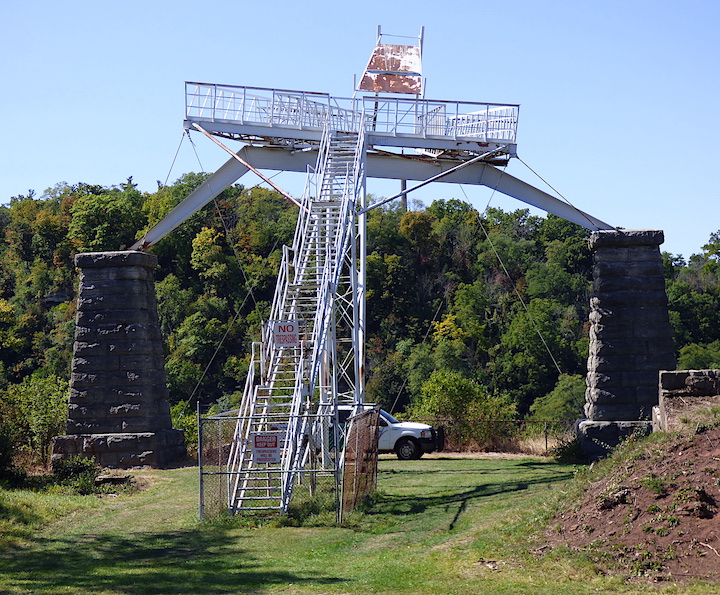 Schwarzmueller explained how this day come about.

“In the year 2000, our nonprofit organization, the Niagara Frontier Chapter of the National Railway Historical Society, published a book called ‘The Niagara Gorge Belt Line,’ a pictorial history of the trolleys that ran in the gorge on our side of the Niagara River, and along the rim of the gorge on the Canadian side,” he said. “The trolleys crossed the Honeymoon Bridge in Niagara Falls and the Lewiston-Queenston suspension bridge. Both bridges are now gone. Our book, by the way, is available for purchase through our website.

“As someone interested in all things historical, I came upon a website called the Historical Marker Database in which contributors can post images of historical markers and military memorials around the world. Some markers in New York state on this website were attributed to the William G. Pomeroy Foundation. I became curious about the foundation, read about their historical marker grant programs, and remembered about the gorge trollies. After a few walks about Artpark, and finding no signage about the gorge trollies, nor signage for the ruins of the Lewiston-Queenston Suspension Bridge, it occurred to me that this would be a great opportunity to apply to the William G. Pomeroy Foundation for a couple historical markers.

“What did the foundation require for these historical marker grants? Primary evidence. This required one or two trips to the Niagara Falls Public Library where original news stories in the Niagara Gazette were found and copied from microfilm. I wrote to the United States Internal Revenue Service for evidence that our organization is a registered nonprofit under Section 501(3)(c). I contacted Artpark Director Adam Tiede for permission to install the markers, which was granted. In summary, we needed news articles, photographs, written permission from the property owner, and proof of nonprofit status, to apply for the grant, and we were successful.

“What about the text for the markers? What should be proposed? The elements for the Lewiston-Queenston Bridge marker were easy to decide, though the foundation wanted the elements in a certain order, which delayed production. Because Artpark received the Lewiston-Queenston Bridge marker quite late in the season last year, we together decided to wait to install them this year. Adam’s crew did the actual installation for us.

“As for this marker, I remembered a picture in our book about the Niagara Gorge Belt Route that I mentioned – a picture of President William McKinley riding the trolley in the gorge. That a sitting U.S. president rode a trolley here seemed like an event that Artpark visitors might find interesting. Many of us know that McKinley was assassinated in Buffalo, and that a monument to him commands the front of Buffalo City Hall. Until doing the research, I had no idea that he rode a trolley here on the very morning of the day that he was mortally shot. Though the remark about McKinley riding a trolley here could strike the interest of visitors, it is rather morbid and should not be the sole remembrance we have of President McKinley.

“If you met President McKinley on that fateful day, how would you address him? ‘Mr. President’ comes to mind first. This would, in a sense, be wrong. How so?

“On June 13, 1861, at the outbreak of the Civil War, a polite, meticulous, gentle, 18-year-old man from Poland, Ohio, standing 5’6” tall, enlisted to serve as a private in the 23rd Ohio Volunteers, Company E, with the permission of his parents, though his mother had wanted him to eventually become a Methodist bishop. Why did he enlist? Was is for adventure, for salary? No. William McKinley enlisted so that he may earn the continuing respect of his community, and also out of patriotism.

“As his superiors became familiar with McKinley’s book-smarts and fine horsemanship, he was placed in roles that required these skills. He advanced in commissary and quartermaster duties, and then became adjutant to several generals, including the future president, Rutherford B. Hayes, delivering messages to field commanders while under fire.

“Two incidents from the war are especially telling of the character of William McKinley. In the Battle of Antietam, his comrades were ordered forward at 2 a.m. Come 2 p.m., they were holding, blockaded by the confederates, and terribly hungry. Without being ordered, McKinley piled pork and beans, crackers and coffee in a wagon and drove it through enemy fire to his comrades. The back of the wagon was shot off by cannon, but he made it through. The men were incredibly grateful.

“The other telling incident: While marching after the battle of Cloyd’s Mountain, soldiers came upon a black family walking on the road. The woman was carrying a child and was obviously exhausted. McKinley stopped to help. He carried the child for the woman for at least a mile, and over more than one ditch. To McKinley, he did this as if it was no more than his duty to do it.

“McKinley was mustered out of service at the end of the war as he received promotion to brevet major. Henceforth, he was commonly addressed as Maj. McKinley. He stated that of the various titles and positions he received in life, he was only sure that he earned one, that being major. He preferred to be addressed as major.

“Life was more complicated for Maj. McKinley after the war. He wanted to avoid the Spanish-American War, but became a wartime president. He appointed more (Black individuals) to public office than any predecessor, but became more concerned with national unity than civil rights. He did not want to become an imperial president. He would not break precedent and visit a foreign country, only going partway onto the Honeymoon Bridge. Yet he insisted on occupation of the Philippines, lest a competing power such as Japan fill the void.

“Rather than dwell on the fatal date, let’s be tourists, as Maj. McKinley was, and enjoy the day.

“Wouldn’t this be a great place for a life-size static trolley?

“My thanks to our chapter president, Jim Ball, and officers Becky and Al for their support; to park manager Adam Tiede and his crew for installing the markers; to Ken Slaugenhoupt and Tom Collister of Historic Lewiston for coming; and to the William G. Pomeroy Foundation for the grants for the markers.”