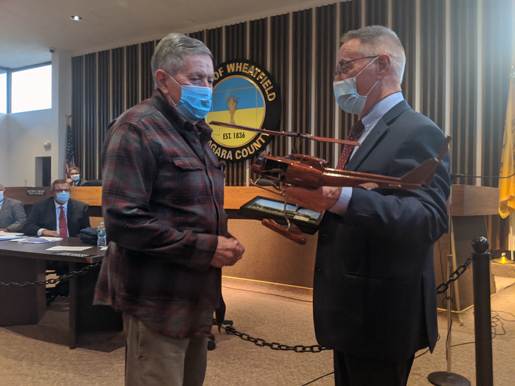 Supervisor Don MacSwan presents Tom Kontak with a replica of the Vietnam-era UH1-D Huey helicopter situated outside of Town Hall.

It was an eventful session at Monday’s Town Board meeting in the Town of Wheatfield. Tom Kontak, a member of a local veterans group, was recognized for his efforts in the restoration of a helicopter located at the Town Hall, which now stands as a monument for veterans.

Elsewhere, local officials and members of the public voiced their displeasure with the continued delays on safety measures for the Ward Road and Niagara Falls Boulevard intersection.

Supervisor Don MacSwan announced that, over the course of the weekend, the Vietnam-era UH1-D Huey helicopter located outside of the Town Hall had been crane-lifted onto its new platform.

“I want to thank our veterans group and especially Tom Kontak. They’ve worked just about daily whenever they could on this,” MacSwan said. He then called Kontak up to the risers and explained the kind of emotional impact the helicopter has brought to those in the veteran community.

“The other day, when they were putting the helicopter up on the lift, there was a gentleman next to me. I don’t know what his name is, obviously a veteran, and he had tears in his eyes. I said to him, ‘Bring back some memories?’ He said ‘Yeah, I was in the infantry. I flew many missions in those helicopters.’ It also moved me. … It was an emotional time for me also,” MacSwan said

A Vietnam veteran himself, MacSwan has spoken previously about how much the helicopter means to him personally. At the Town Board’s July 27 meeting, he detailed the ways the veterans group had added a personal flourish during its restoration of the aircraft to honor MacSwan’s own service.

“If you notice the number on there, 82 … when I was wounded in Vietnam, the helicopter that I went into the hospital ship on was Dust Off-82. And they did that for me,” MacSwan said in July. “When they asked me to be here when the helicopter was delivered, I had no idea they had Dust Off-82 on the doors and on the nose. When it came around the corner here, and I saw 82 … I couldn’t speak. They did that as a tribute to me ... so every time I see that it brings back small memories.”

“I want to thank you for everything you’ve done in your committee. Without you, this wouldn’t be getting done. And, whether you like it or not, you’re going to get your helicopter today.”

MacSwan then reached under his bench and produced a model Huey helicopter, along with commemorative photos of when crews hoisted the chopper onto its new stand.

“Just so you know, this is handmade. I’ve had this for years in my collection ... and if there’s anybody that’s deserving, it’s you,” MacSwan said. “And I’m sure with your wife’s permission, you have a good place for it (laughs).”

Kontak shuddered the personal praise, saying, “Like everybody has heard so many times it’s not a one-person job; you know, this is a real community effort. We’ve had many veterans who are able to help, and we’ve had some veterans who are only there in spirit, because many veterans are not in condition anymore. We’re all getting quite a bit older. The Town Board has been very helpful. They’ve been supportive with everything we’ve needed, and I thank each and every one of you for all the things you’ve done to further what we’ve got going today.”

Town resident Doris Carlson aired her concerns about the NYS Department Of Transportation’s current and future plans for the intersection of Ward Road and Niagara Falls Boulevard –specifically what she and other locals feel has been a lack of meaningful action.

The DOT previously announced major reconstruction plans for the intersection to address myriad safety concerns set to begin in 2022. In the interim, it has implemented new signage and a permanently reduced speed limit in the area.

As Carlson noted, the DOT has announced and later punted on similar proposals in the past.

“My fight is not one of political agenda, but as a concerned resident that can’t understand why the state DOT feels that our safety and concerns can repeatedly be pushed aside, basically saying that we, the residents of the Town of Wheatfield, don’t matter to them,” Carlson said.

Carlson also questioned what the DOT had done with funds previously allocated for the reconstruction back in 2016. She pointed to documents on the governor’s website that show that, in 2016, federal funding was made available to the NYSDOT as part of Highway Safety Improvement Program Awards. Plans to address the Ward Road intersection were among three projects named in Niagara County.

Per the document, “$1.8 million was allocated for a NYSDOT project to construct a left-turn lane on U.S. Route 62 (Niagara Falls Boulevard) at its intersection with New York Route 429, Ward Road in Wheatfield, Niagara County. The new lane will reduce rear-end and left-turn crashes caused by aggressive driving and failing to yield the right of way.”

“What happened to this funding, and why was it not used for its intended purpose back in 2016-17?” Carlson asked. “By the way, this is the only one of those three (Niagara County) projects that was not completed.”

Carlson went on to implore local officials to put pressure on the DOT to at least make sure the project isn’t abandoned again, if not help it happen sooner.

“I know what you are all saying to yourselves, ‘This is a state DOT issue, not a town issue; there is nothing that we can do. We have just as little say-so as you, the residents.’ My apologies up front,” Carlson said, “But I don’t believe you. I don’t believe that, just as my constant nagging has opened up a little bit of a door to this town board, your constant calls and questioning wouldn’t put some pressure on the issue. All of you here on those risers were elected to represent us; all of us here on the floor. You are all we have, you are our voice.”

Carlson wasn’t alone in her frustrations. Many residents were in attendance to show support to the issue. Additionally, Niagara County Legislator Jesse Gooch also voiced displeasure with the delays. He added a poignant personal anecdote exemplifying how dangerous the roadway is.

“I understand Mrs. Carlson’s concerns about this Ward Road issue. It’s been an issue for many, many, years,” Gooch said. “Every time I drive through that intersection, which is frequently, I hold my breath. One of my very good friends got hit on his motorcycle there about 10 years ago. He hasn’t been able to walk since without a cane. The problem is there’s oncoming traffic, there’s no real turning lane, and people don’t pay attention. It’s just been a problem for a very, very long time.”

Gooch also echoed Carlson’s point that the current long-term plans have been proposed, approved, and cancelled at various times in the past. He also talked about how frustrating it is to even communicate with DOT officials.

“A lot of missed communications, a lot of lip service from the DOT as far as I’m concerned. I mean, I’m an elected official and it took me several days, even a few weeks for them to even return my phone call,” he said. “So I could imagine how long it takes for them to return their (residents) phone calls. Something needs to be done. I know that they say it’s going to be done; they gave us a projected timeline. But now that COVID-19 happened, is that going to push it back another couple years?”

MacSwan said he didn’t agree with the assertion that the DOT doesn’t value resident’s lives, adding that there are accident-prone areas not just in Niagara County, but Erie County as well. However, he said based on recent conversations, the DOT has no plans to expedite the project.

“I think it all comes down to the money and all I can say to you is that we have met with them; we’ve had a Zoom call with them just recently about trying to move it up and it’s not going to happen,” MacSwan said.

However, he went on to not only applaud Carlson for her efforts, but he acknowledged that local officials will have to continue to press the DOT to make sure the project is seen through.

“I think you’re right – I think we have a responsibility as Town Board members to continue to put pressure on them to make sure that it’s done,” MacSwan said. “And I want to thank you for bringing this back to us again. I know we’ve talked and I thought, ‘What else can she say?’ But you said it well and I thank you. 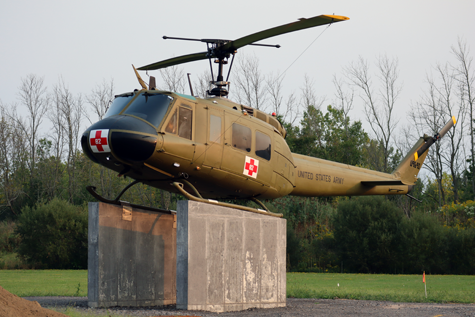