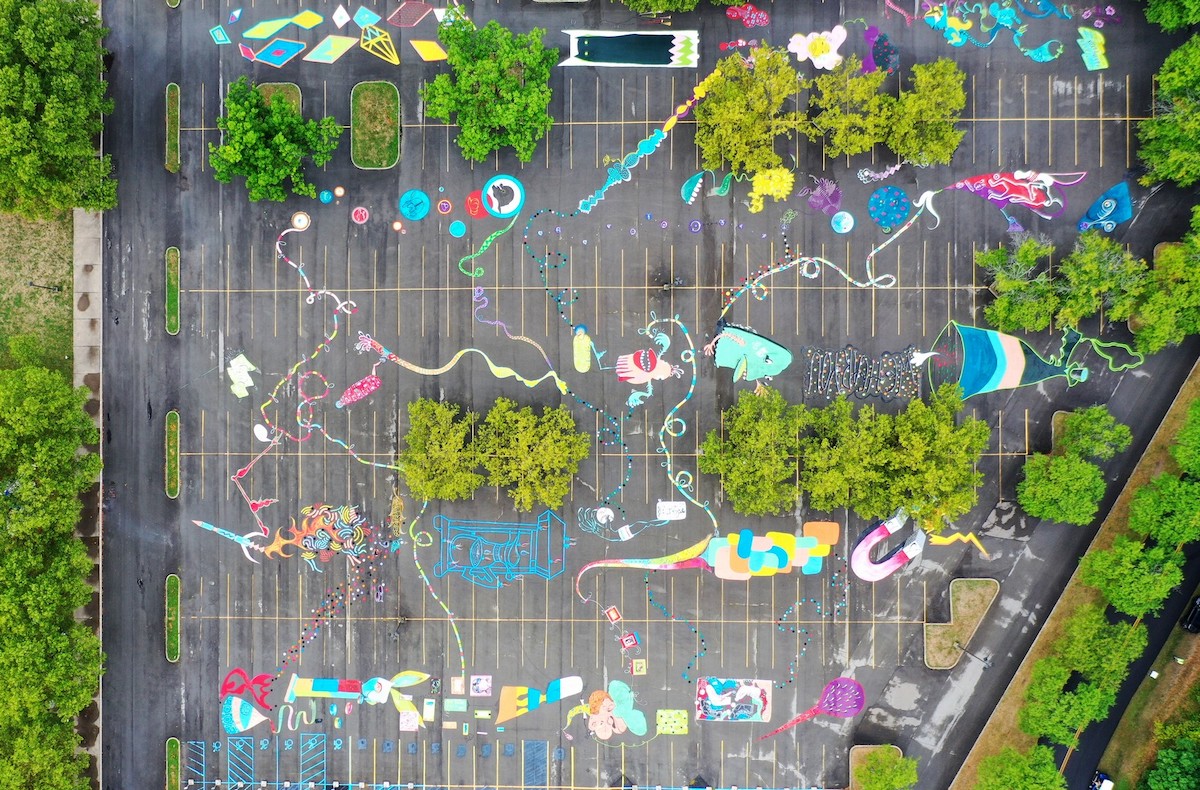 ‘The Solo Roths Waltz Across the Red Hot Colossus Lot’

Artpark & Company used its unusually (and pandemic-related) slower spring months to plot out a new mural project for the main parking lot on South Fourth Street in Lewiston. That grand canvas was recently completed and can be seen in these pictures from K&D Action Photo & Aerial Imaging.

A jury selected Rob Lynch and Matt Sagurney (aka The Solo Roths) as lead creators. The duo was tasked with collaborating with Cynthia Pegado and the “Artpark Bridges” community outreach program to “transform the largest Artpark parking lot into a large canvas of color that gives voice to the underserved members of our community and expresses shared humanity.”

The Solo Roths worked with People Inc., Empower, Artisan’s Edge and the Parkinson’s community, among others, in crafting design ideas.

When the mural work began in late-June, Artpark & Company Executive Director Sonia Kozlova Clark said, “Every time I enter Artpark and I look at this vast (main) parking lot, I always think, ‘Well, this has got to be the next big project for us.’ It’s an entryway; it’s the gateway to Artpark; it’s what should say to everybody ‘This is Artpark. You’ve arrived.’

“It’s been my plan to definitely do an artwork here, sooner or later. And this year was just a perfect opportunity. I realized we’re gonna have so much less traffic and so much less use,” as New York’s efforts to combat the coronavirus prevented the venue from holding its annual “Tuesdays in the Park” concert series. 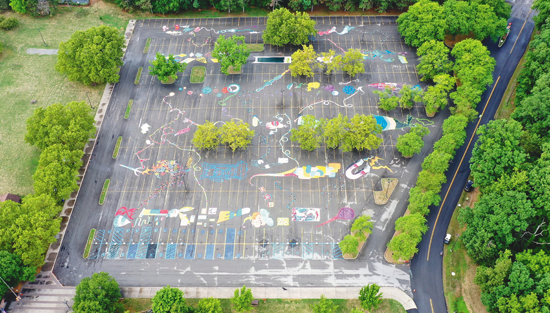 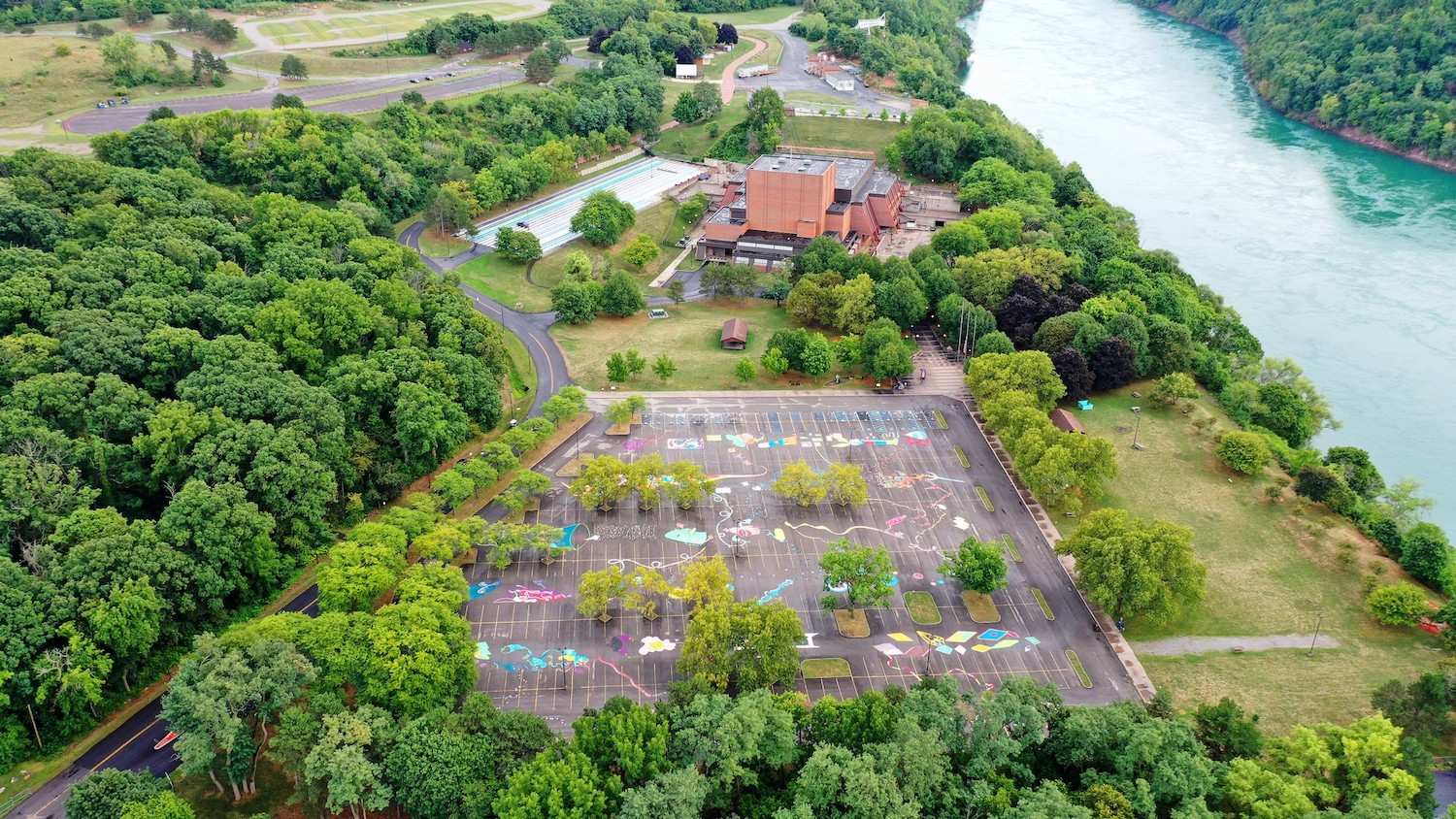 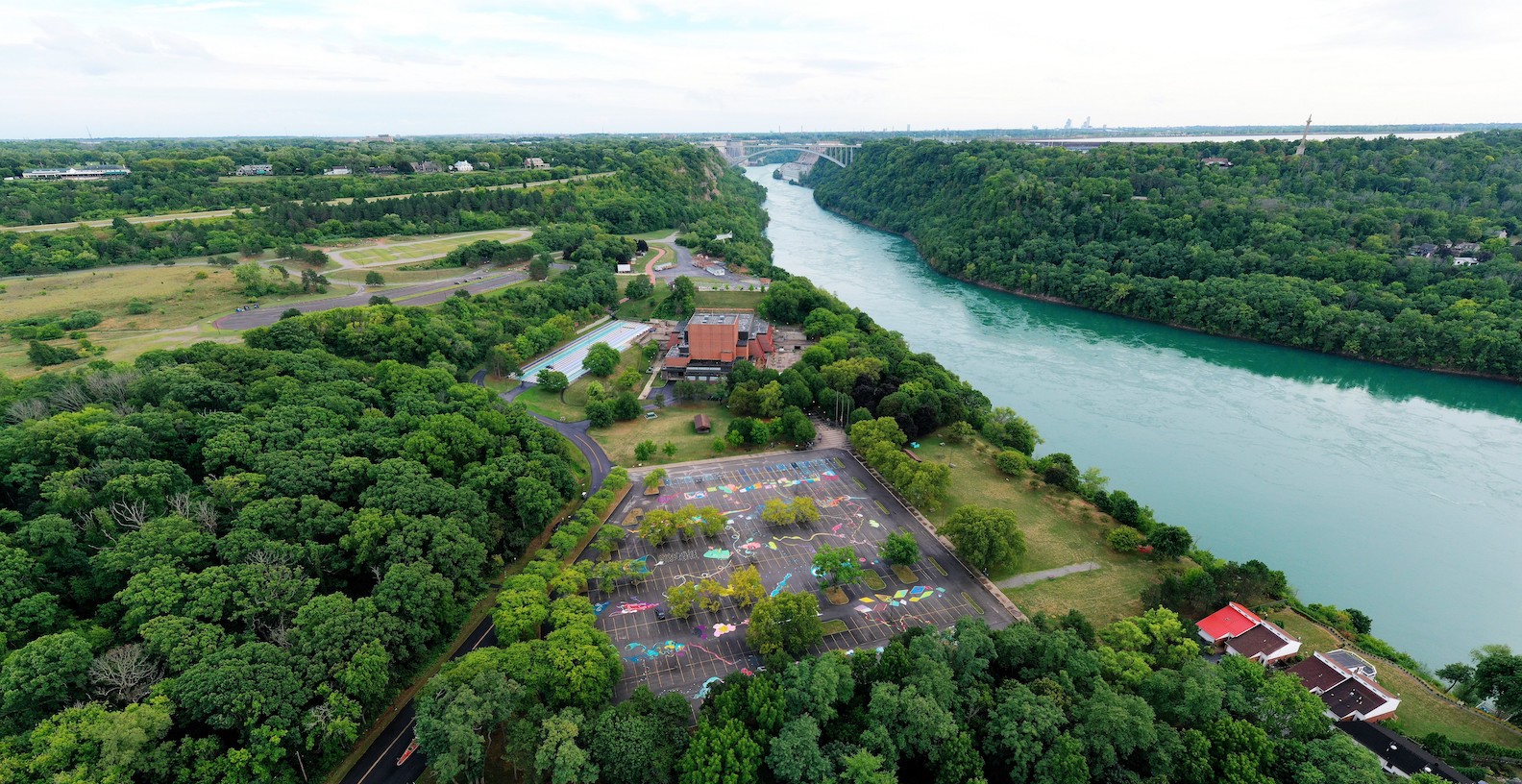 This week, Clark said, "The idea of bringing Artpark’s gateway parking lot into a work of art has been years in the making. Specific plans for this project as a community collaboration led by the ‘Artpark Bridges’ program began last January with the concept of the project’s mission created by a special committee, which included Artpark staff, the Niagara Falls National Heritage Area team and members of the Lewiston and New York State Parks community. What followed was months of a truly engaging process that included the selection of Matt Sagurney and Robert Lynch, otherwise known as ‘The Solo Roths,’ as the lead artist. (They) worked in collaboration with Cynthia Pegado leading the ‘Artpark Bridges’ groups: People Inc., Empower, Artisan’s Edge and the Parkinson’s Community, joined by volunteers, friends and students and Lewiston residents.”

Clark said the project was “a relief from isolation for at-risk populations during the COVID pandemic throughout the summer for all involved. With Cynthia’s stewardship and extraordinary dedication to the ‘Artpark Bridges’ program, and in a big way with Rob and Matt’s welcoming, engaging and very humorous personalities, the work itself quickly became an ongoing live program at Artpark that entertained and inspired so many. The giant canvas became a true playground for so many through the summer 2020 months and now will serve thousands more in the years to come.

“Personally, I couldn't be more thrilled with the result as it reflects the intended mission of the project, the voices of our community and most importantly is a superb work of art.”

Pegado is the director of the “Artpark Bridges” program. She said, "The creative process forged ahead through pandemic restrictions as we created new forms of shared creative space. Our design work and collaborations took place in Zoom workshops and on-site at Artpark where the very nature of a colossal-sized artwork ensured social distancing. Our ‘Artpark Bridges’ community now sees, knows, feels that their voices of artistic expression are valued. I witness absolute delight as each individual contributor identifies their contributions in the grand waltz of motifs that came out of our project collaboration with The Solo Roths.

“I'm deeply moved to see the expansive impact of this project surpass even my dreams for it. This unique collaborative project has formed a tangible sense of community and of thriving, as ‘Artpark Bridges’ artists living with incurable neurological disease or special needs show us their spirit and inspire us. I think I can speak for all of us at Artpark and our ‘Artpark Bridges’ mural team members, that we couldn't have imagined a happier outcome.”

Pegado added, "The mural project’s cross-disciplinary approach and high degree of interactive participation, both personal and communal, invites vibrant collaboration in an environment of trust and mutual respect. We are building uniquely personal kinesthetic vocabulary of natural and creative movement within each person’s abilities, and giving these portrayals of "Self in the World" a megaphone, so to speak, through long-lasting, larger-than-life visual representations in the mural.”

The Artpark parking lot mural collaboration was made possible with funding by the Charles D. and Mary A. Bauer Foundation, Cornerstone Community Federal Credit Union, Pam and Joe Priest and Jeff and Marla Williams.