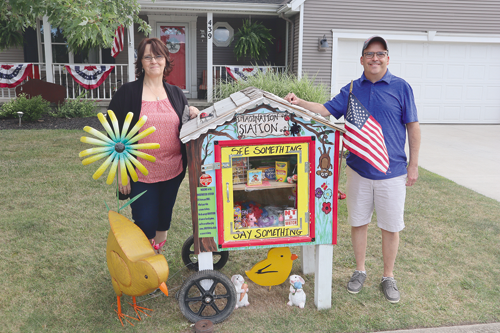 Creators Sherri and Joe Marranca stand in front of the Imagination Station (444 Deerfield Drive), a little library full of activities and crafts to keep kids and families engaged.

Story and photo By Michael DePietro

With few activities and programs available to kids these days, parents know that it’s all too easy for them to become glued to phones, TV’s and video games. Fortunately for those in one North Tonawanda neighborhood, a brightly colored wooden box is helping to get kids away from the screens and foster their creativity.

The Imagination Station, located at 444 Deerfield Drive, was started with the intention of promoting outside and family playtime. Inspired by the nationwide Little Free Library movement as well as the Little Free Pantry locations in North Tonawanda (Nash Road Church and Lumber City Church), the Imagination Station includes things such as books, board games, puzzles, outdoor play toys, and arts and craft supplies to help spark children’s imagination and creativity.

The station is available for everyone in the community to use. Residents can simply stop by and take a fun item for free, or leave an item for other kids and families to enjoy. The station and its contents are routinely sanitized to ensure the safety of users.

The Imagination Station was started by Sherri Marranca with the help of her husband, Joe. It was created in conjunction with the NT Neighborhood Watch, where the Marrancas are both members. The box even includes the Neighborhood Watch’s “See something, say something” slogan as a reminder for kids to stay safe.

The couple started developing plans throughout fall and winter and enlisted Joe’s brother, Vincent, to construct the station. By late March, it was up and running. With a prime location, just across the street from the North Tonawanda Intermediate School, the station seemed destined to be successful. However, once the pandemic hit, the Marrancas weren’t sure what kind of response they would get without the foot traffic from the school.

In spite of everything, or perhaps in part because of it, the station has become quite the hit. Its Facebook page is full of smiling-faced children enjoying not only the gifts they’ve gotten from the station, but the colorful and playful design of the station itself.

But it’s not just the kids who love it. Parents have expressed their gratitude for having something so positive available to kids during these uncertain times.

“It was actually kind of a perfect storm. … I don’t know if it would have gotten as big as it would have without COVID,” Joe says.

“I can’t even tell you how many parents have come to me and cards in the mail thanking us,” Sherri says. “A lot of them say they can’t take their kids to the store. So to have a place where they can come and pick something out, the parents are so thankful they have somewhere to take them – and the kids are so grateful.

“And we’re grateful for the community because, without them, we couldn’t run this; it’s all based on donations.”

In fact, aside from what the Marrancas provide themselves, the station is entirely donation based. So far, the community has responded in a big way. The station has been able to run several events and giveaways this year including events for Mother’s Day, an Easter candy giveaway, and most recently, a backpack giveaway for kids heading back to school.

“It’s been organic; a snowball effect ... It really seems to resonate with people. They just want to help out. It’s really appreciated,” Joe says. “Recently we had a bike giveaway. We wanted to give away maybe 10-12 bikes. But with donations, we ended up giving away 25. It really was a great event. Just to see the smiles on the kids’ faces, it was great.”

One of the most popular fixtures of the station has been Chester the Chick, a fluffy little craft bird that Sherri says started around Easter. She began posting pictures of the bird and hiding it around the station. He quickly became popular, so she put out a few more of the little birds and encouraged people to take them, photograph its adventures and share them on the station’s Facebook page. Since then, the little puff has gotten into all sorts of shenanigans – from beach vacations, bike rides (and an occasional tarantula ride for good measure). He’s even been photographed at the Niagara Gorge.

“Chester is the cutest thing of all. All the kids love Chester and even the adults, they love Chester (laughs),” Joe says.

He’s since gone on to inspire “Chester’s Treasure Hunt,” a scavenger hunt where the little birds are hidden around some of the nearby public parks. Anyone who finds one of the hidden Chesters can contact the Imagination Station’s Facebook and redeem it for a special prize. Sherri says there are still plenty of prizes to give away.

Running the station and its social media accounts is no doubt a lot of work, but with the success the station has had, it all appears to be worth it.

“My wife’s done a great job; she does all the heavy lifting for the project. I really can’t sing her praises enough,” Joe says.

Sherri says, “We just wanted to do something nice for the kids and it was important to get them away from screen time. We’re trying to bring back family; get them around the table for a board games again, get them outside for sports and jump rope. … It just happened to fall around the right time, and right place.”

For more information, or to contact for donations, visit the Imagination Station’s Facebook page, www.facebook.com/imaginationstationnt, or email [email protected].