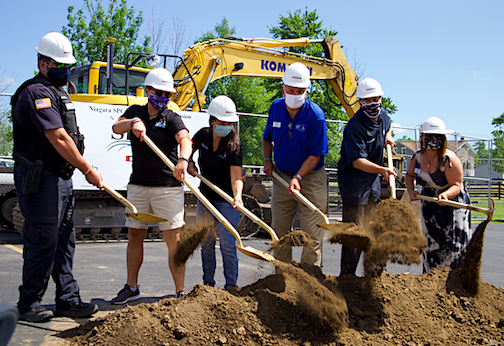 Donning hard hats and shovels, local officials joined administrators from the Niagara County SPCA for a groundbreaking ceremony Friday, as the organization gets set to begin construction on a $1.5 million state-of-the-art surgical suite. The end result will be a 2,000-square-foot facility complete with an X-ray room, which the SPCA said it’s never had before.

“This is an extremely proud and exciting moment in our history,” Executive Director Tim Brennan said. “It's also a very important milestone in our journey, as we continue to provide the absolute best care for every animal that comes to us.

Until now, surgical procedures at the Niagara County SPCA have been conducted inside a 144-square-foot surgical trailer donated by the SPCA Serving Erie County in 2013. The organization said doctors and infirmary staff have often had to operate in extreme temperatures inside the trailer and that, due to space constraints, they have been unable to perform X-rays on dogs over 50 pounds.

Brennan went on to outline the amenities the new facility will have, as well as the numerous positive effects it will bring to the organization.

“We’re going to have our very own X-ray room. We used to have to send all our animals out for X-rays. This is going to be a big cost-saver for us,” Brennan said.

One of the largest benefits of the new facility is that it will greatly help the organization’s expanded trap-neuter-vaccinate-return (TNVR) program for feral cats. As of July 1, the Niagara County SPCA no longer traps healthy feral cats for impoundment. Instead, feral cats are humanely trapped, vaccinated, spayed/neutered, and then have their ear tipped for identification before being returned to their outdoor home.

According to a press release, the Niagara SPCA said shelters that have adopted TNVR saw their intake-numbers decrease, save rates increase, and community support increase, as well.

Brennan said that, with the facility’s two new operating beds, the organization will be able to better take advantage of some of the volunteer help it’s been unable to utilize in the past.

“We get many offers from community vets, who offer to come in and help with our spay/neuter surgeries. We can’t really take them up on that, because we don't have the room in a 140-square-foot trailer,” he said.

Brennan explained the new surgical suite will also allow the organization to expand its community programs that provide sterilizations for dogs and cats whose owners fall into a low-income bracket, as well as for area rescue groups.

Funding for the project began in 2019 with a $500,000 grant through the New York State Companion Animal Capital Fund. Since then, much of the donations have come from community funding. Among the largest donations came from local resident and Army veteran Bob Nowakowski, who pledged a $100,000 gift toward the project and challenged the community to match it.

Brennan said Nowakowski has been coming to the facility for over 20 years simply to visit the kennel dogs and offer them a milk bone and a piece of cheese. In light of Nowakowski’s challenge, Brennan noted the SPCA raised an additional $75,000 from community members – a figure that is still climbing.

While construction on the new facility is slated to begin at the end of the month, and the project has an expected completion date of February 2021, administrators said they still need another $600,000 to fully fund construction.

For information on hope to help get involved with the Niagara County SPCA’s fundraising efforts, visit www.niagaraspca.org. 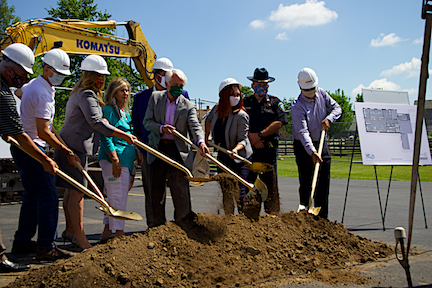 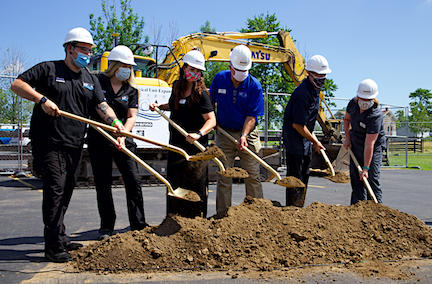