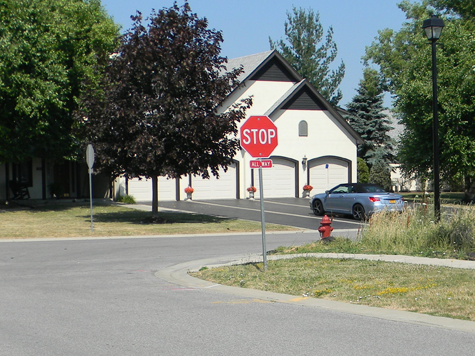 A view of the traffic enforcement stop sign recently installed at Northridge and Legacy drives. (Photo by Terry Duffy)

As the River Region continues to reopen to some sense of normalcy coming off the COVID-19 pandemic, area residents are also beginning to experience the signs of increased activity.

More people out and about in the area, more traffic at times in town and village neighborhoods and on the roadways. Along with that has come the increased likelihood of potential problems, heightened awareness and, yes, more complaints to the Lewiston Police Department.

Over past weeks, police activity in the area has spiked, evidenced by the greater numbers of calls made to LPD. These calls have ranged from the 170s- to 190s-range around the Memorial Day holiday to more than 200 complaints of all types made to LPD this week, as reported in The Sentinel’s Lewiston Police blotter reports.

One area experiencing a hike has been traffic complaints. One issue in particular – that being traffic safety in Lewiston neighborhoods – has caught The Sentinel’s attention.

Just this week, the paper received a rather lengthy letter from resident Phyllis Ceccato of the Northridge Drive neighborhood in the town, offering her thoughts on what she called, “A Dangerous Traffic Condition in Lewiston.”

Ceccato wrote, “Living at the intersection of Northridge Drive and Legacy Lane has become an adventure and a sideshow. I have a bird’s eye view of this intersection.

“There are 40 driveways and three parking lots on the west side of Northridge. Each patio home has two driveways, so when the planned nine homes are completed, there will be an additional 18 driveways. That gives us a total of 61 egresses on Northridge, plus the traffic from the three intersections, coming together on this very short span of road. Further complicating this are the vehicles of the laborers working on the patio homes along with the trucks and vans of the businesses supplying and working on these homes.”

In her letter, Ceccato pointed out Northridge residents had voiced their concerns earlier on the potential for traffic problems in the neighborhood to town Planning Board officials, as the Legacy patio homes approval process moved along. She said those concerns were not heard by town officials.

“Now we come to the next ‘accident waiting to happen’ situation,” Ceccato wrote. “Last summer, stop signs were installed on Northridge, along with a ‘notification sign’ ahead of each of them, warning of the new stop sign. In the approximately 11 months since the installation of these signs, four categories of drivers have emerged at these stop signs:

“1. The driver who follows the rules and comes to a complete stop.

“2. The driver who knows of the upcoming sign, thinks he/she is a privileged driver, and completely blows it off going through the sign at about 35 MPH. That is especially fun for the car coming from Route 104. They come roaring down the hill on Northridge and have that extra thrill going into the two curves ahead without stopping. Pity you if you are the car in front of them and you DO stop at the sign.

“3. Driver Number 3 is the slow roller. Never stops, but reduces his speed to around 20 MPH and rolls through the stop sign.

“4. This driver goes through the sign at full speed, but his brain is a bit slow and does not register STOP until he is through the intersection and about 15 feet beyond that. Then he comes to a full stop.

“Most of these people are not new to this area. They live here and drive this route several times a day. I see the same drivers (on the phone, drinking water or coffee, stuffing food in their mouth) and driving through the sign. Your life and someone else’s (drivers, passengers, the many walkers, people on bikes, children and pets) may be at stake.”

Ceccato acknowledged Lewiston Police Department officers have in the past responded, both with the new signs and the enforcement. But of late, “Several requests have been made by neighbors to our local law enforcement agencies about this situation, but have fallen on deaf ears. These complaints have been made over a period of several months.”

“There are many places where police can park their cars and view this intersection,” she noted.

An inquiry to LPD Chief Frank Previte shed some light on the situation.

“We are aware of the traffic safety concerns there and do respond,” he said.

Previte related that, in past months over the course of the “PAUSE” and the resulting lessening of outside activity due to quarantine, social distancing and the like, LPD activities including road and traffic patrols/enforcement measures were modified.

That enforcement is now in the process of returning, evidenced by the aforementioned spike in police activity. Previte said LPD road patrols have resumed. Just this past Sunday, LPD initiated a vehicle/traffic pullover at the corner of a Ridge Road and Northridge Drive that resulted in an aggravated driving while intoxicated charge against the driver. LPD traffic patrols have also been active in a number of pullovers for speeding, DWI and the like, in areas both above and below the hill.

As far as the Northridge Drive resident’s traffic safety concerns, Previte said, “We are aware of it.”

“Those actions (drivers failing to do perform stops at stop signs, if at all) do occur,” he said. “You can see it in your own neighborhood. I see it mine. And we do monitor it. But our officers cannot be everywhere.”

He closed by urging residents to maintain their communication with LPD on whatever problems they may experience. Beyond calling 911 or the police office at 754-8477, he said LPD maintains a convenient phone app, available via download, that offers an immediate contact with the department should the need arise.