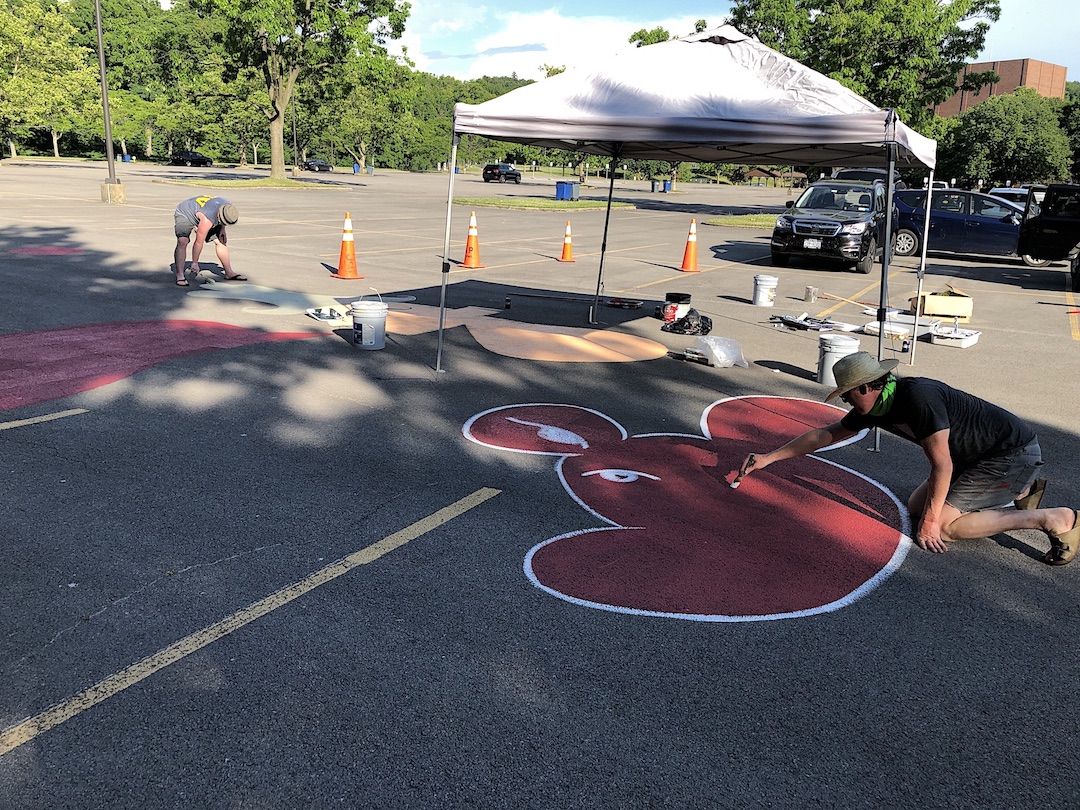 Rob Lynch, top, and Matt Sagurney (aka The Solo Roths) are working on a new Artpark parking lot mural.

There was just one problem: The mural is located in the South Fourth Street C lot – a parking area normally reserved for sponsors and VIPs. It’s not necessarily seen by the masses who frequent the state park in the late spring and throughout the summer.

“Every time I enter Artpark and I look at this vast (main) parking lot, I always think, ‘Well, this has got to be the next big project for us.’ It's an entryway; it's the gateway to Artpark; it's what should say to everybody ‘This is Artpark. You've arrived,’ ” Executive Director Sonia Kozlova Clark said. “It's been my plan to definitely do an artwork here, sooner or later. And this year was just a perfect opportunity. I realized we're gonna have so much less traffic and so much less use,” as New York’s efforts to combat the coronavirus have prevented the venue from holding its annual “Tuesdays in the Park” concert series.

Artpark set forth an ambitious plan.

A jury selected Rob Lynch and Matt Sagurney (aka The Solo Roths) as lead creators. The duo was tasked with collaborating with Cynthia Pegado and the “Artpark Bridges” community outreach program to “transform the largest Artpark parking lot into a large canvas of color that gives voice to the underserved members of our community and expresses shared humanity.”

The Solo Roths are working with People Inc., Empower, Artisan’s Edge and the Parkinson’s community, among others.

That was a main reason why Artpark selected Lynch, an art teacher at Niagara Falls High School, and Sagurney, who teaches art at Kenmore East High School.

“We were looking for a lead artist to work with others, as well, and work well with voices of others,” Clark explained. “There's plenty of artists who are amazing, incredible artists, but they work internally. They work as their own voice, and that's a strong voice and it's important to them. But this project is different. We really wanted to incorporate the voices, as we said, of our community. And these guys, we actually had interviews with some of our People Inc. participants. And we watched them interact, and we watched how they took their ideas, and what they did with them – right in front of us. And that was the most exciting thing.

“It was just very obvious these are, indeed, the folks that will be able to take these voices; and celebrate them; and add their own, of course; and bring it all together. And they're very playful, which is also very important in Artpark.” 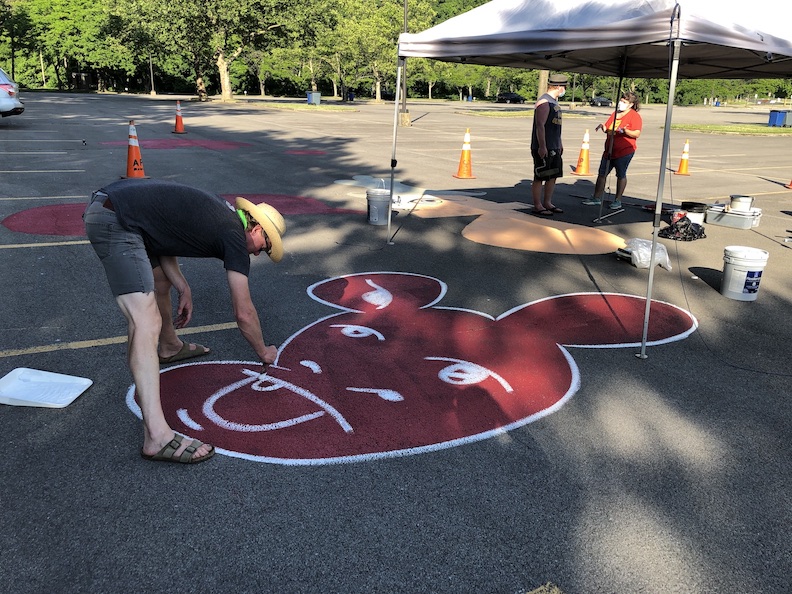 Winslow was on site Friday to work with Lynch and Sagurney.

Q: It sounds like a tall task. What is going to be taking place here and what is your game plan?

He added, “There's been … groups of people with special needs that we've been meeting with, doing Zoom meetings with. So far, we've just had, I think, four hours with the meeting … and basically what's been happening in those meetings is that people are kind of either showing us drawings that they're making, or through discussion Matt and I are basically taking little seeds of those conversations that are going to hopefully develop into imagery here in the parking lot. So, it could be something as simple as one guy had a nickname called ‘Bingo.’ So, the word ‘Bingo’ might show up in here.”

In the Solo Roths’ murals – at Music is Art and the Niagara Falls train station – one can find “this kind of stream of consciousness, free-flowing thing, anyhow; so it's kind of perfect,” Lynch said. “So far, that's what we've been up to; we've just been filling our sketchbooks with little drawings and kind of like little placeholders from the topics that have come up in discussion. I think that's the voice of the underserved. I think that's what they meant by that.”

“A lot of their classes, led by Cynthia (Pegado), incorporate movement and all kinds of body movement. And so even through Zoom classes they’re able to do all kinds of physical body movements. And those movements, then Rob and I are drawing during those Zoom meetings, and coming up with gestures and shapes and forms,” Sagurney said. “Those forms will end up in the designs and in this mural, as well.”

Q: So, is the plan to sort of segment it off and work on it throughout the course of the summer?

“Starting late June and ending at the end of August,” Sagurney said. “And yeah, we'll section off different parts of it.”

“Little sections will be coned off,” Lynch said. “So, the lot will still be open, of course.”

“Physically, it's gonna be super-demanding, but we're gonna just keep on plugging away at it,” he said.

Artpark & Company recently added a drive-in movie series, which will present a challenge to the Solo Roths. Clark said, “I think we can manage. … As we do in the arts, we’ll always figure it out.

“And those things, actually, they oftentimes generate new ideas; and those guys in particular, they are incredible – because they play off of each other. Watching them work is like jazz. The essence of what they do is working together. And they have this unspoken dialogue … they don't know what's coming next. So, for them, it is a pure improvisation. But at the same time, we also know what their background is and what they’re known for.” 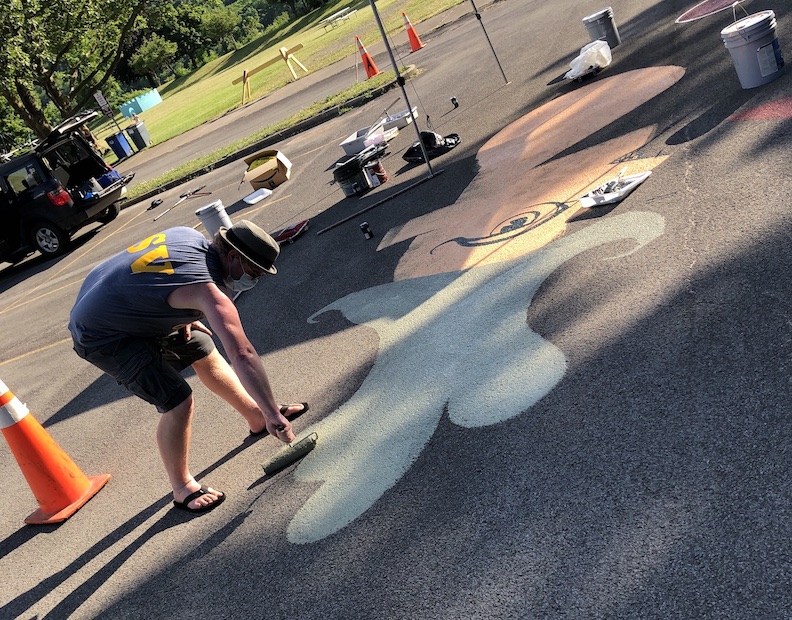 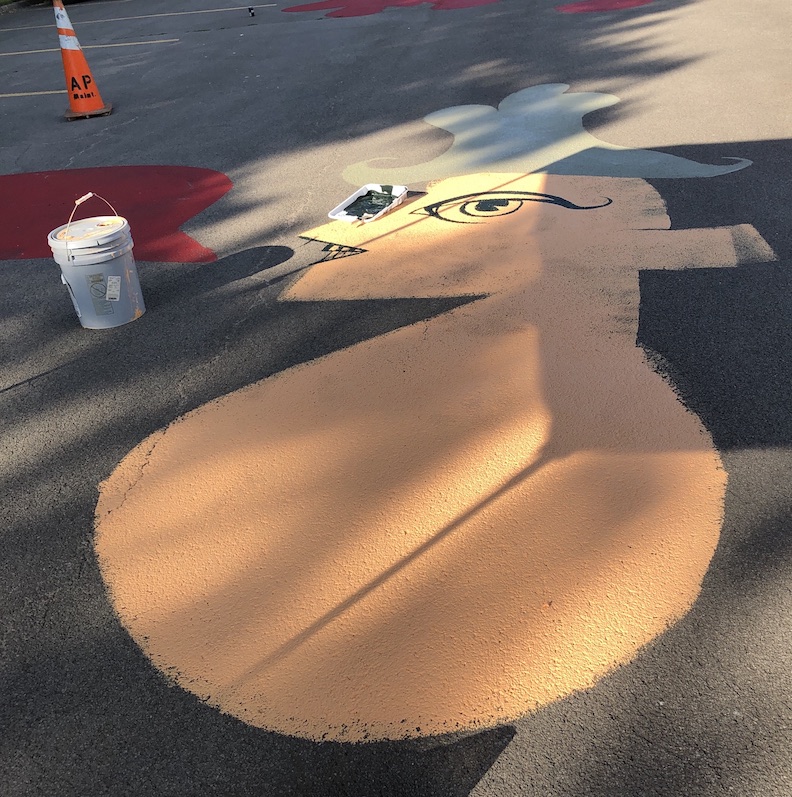 Q: I know it's art and every artist is different. Do you want the audience to walk away with something in particular in mind, or to just come in and find their own inspiration and take their own meaning from it?

“To me that's always the way it is; yeah. I never want to be hit over the head with, ‘Here's what it means! What, don't you get it?’ You know?” Lynch said. “I think it's up to the viewer to decide what they like or don't like about it – and I'm sure we'll be told (laughs). I’m sure all summer long we're gonna hear. The joke is always, like, ‘What is that supposed to be? What are you guys doing?’ Kind of like the accusing tone comes out sometimes. We welcome (feedback).”

“We provide them with shapes and information, and then they put in their own experiences to it – and they determine what the artwork is all about,” Sagurney added.

“Well, it's always good to be around arts and culture,” Lynch said. “It's good for any community. I don't have the ultimate lofty goal of improving the world with our paintings, but I think that just by being around it, it's a positive experience – especially for kids that are growing up, you know, with that sense of wonder; and you can see something and be like, ‘Whoa, this is amazing!’ … I want it to have a little bit of surprise.”

“All of our work, hopefully, has a fun element,” Sagurney said. “We’re really hopeful that this – especially here at Artpark, with the history of Artpark – that we are able to add to the whole history and the heritage of Artpark; and all of the work that's been done here in the past; and add something for it towards the future for people to interact with and relate to.”

“Although it will be temporary, like so many of the Artpark projects were in the past,” Lynch noted.

Q: The “Artpark Bridges” program, the people who participate in that, they've been on stage, they did an art installation. How is that collaboration going?

“And this year, things of course are different. So, what we've been able to do is establish sessions, for now, online. So, there are Zoom meetings with a number of different teaching artists. There's also Native American artists that are working specifically on voices from the Native American community. They have movement classes; they have music classes. Right now, it's all happening via Zoom. But the main focus really is going to be this project – specifically this mural; it's where all those are going to come together.

But the program is on. There's several workshops every week, and we have new relationships, both with teaching artists and with new groups added into the fold. I'm very excited about it.

Q: Are those groups going to be able to participate in any of the painting or did they just give input?

“We're really hoping they can; that is the plan,” Clark said. “As soon as that is possible. There was just a discussion literally yesterday about that. They are eager to come out as soon as they can.

“Right now, it's still very possible for their voices to be expressed very strongly, because they're communicating their actual visual images to the artists, as well, via Zoom and via submitting their designs, email, etc. They actually will be working with very specific visual images and design. They’re using their movement for their own inspiration, but People Inc. and Empower and others are contributing their own ideas.” 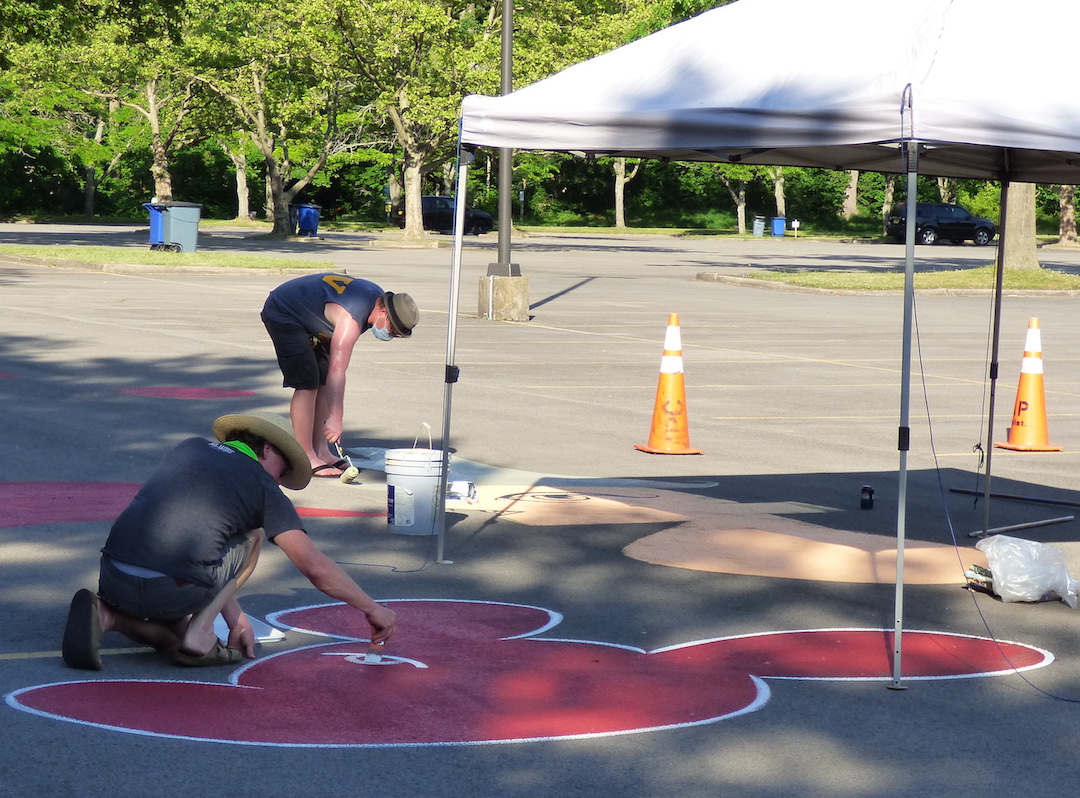 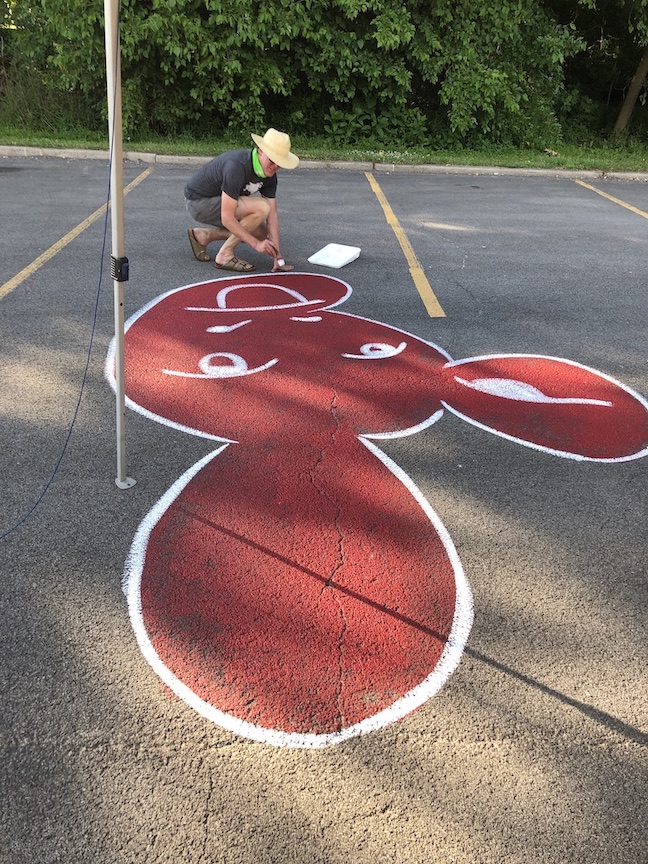 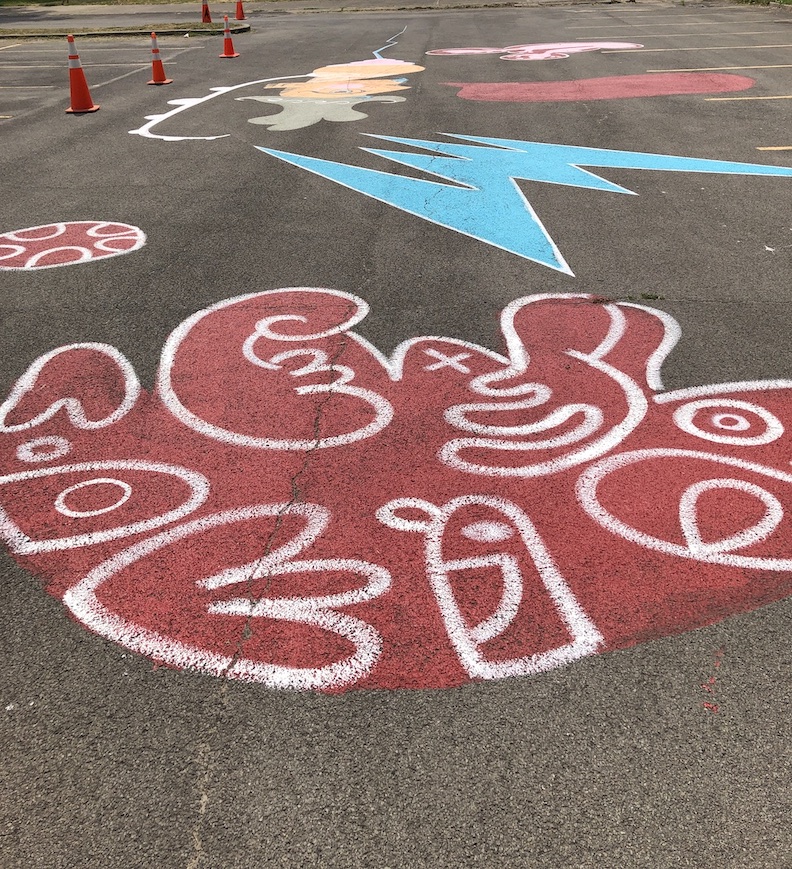 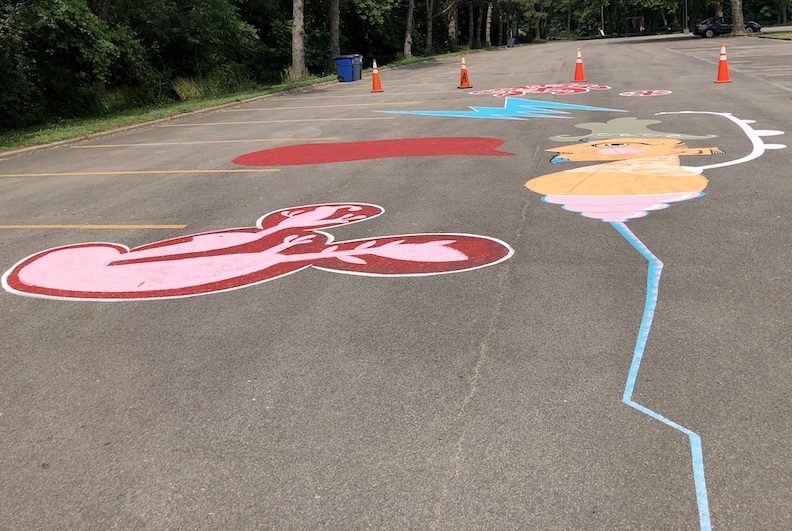