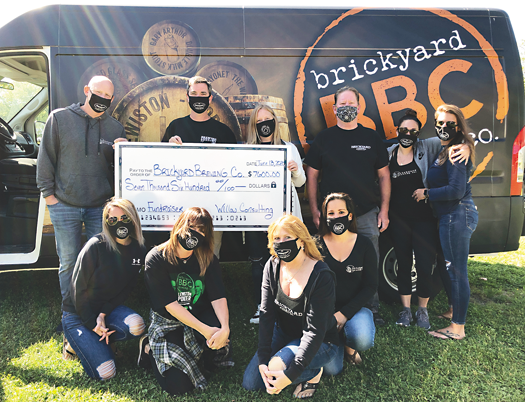 Brickyard team members are serving their signature barbecue and beer at the Lewiston Farmers Market.

Brickyard could be open by summer’s end

One of the largest crowd gatherings of the spring was for something nobody wanted to see.

On the night of Tuesday, May 26, a fire ripped through the top of the Brickyard Brewing Company on Center Street, damaging the structure and sending water and smoke into the adjoining Brickyard Pub & BBQ.

“The first two days after the fire, the morning after, it was like a funeral procession in front and back of the building,” co-owner Ken Bryan said. “People just sat out back and front and cried – people that I didn’t even recognize.”

They mourned – and then they got motivated.

Jamie Symmonds was one of those people.

“When I learned of the fire – once the initial shock wore off – I just thought I had to kind of jump into the helping mode, because every one of them – the Brickyard family – have been helpful, supportive – from back when I was Angel to Apple and another business on Center Street, to now when I’m Willow Consulting,” she said. “All the events and different things I do, they have been giving and kind and generous; they just – they don’t say no. They’ve always helped me, and been big supporters of mine. So, I just knew I had to do something.”

Residents sought to help Bryan and co-owner Eric Matthews, but the duo quickly said all efforts should go to their employees. A half-dozen or so fundraisers were planned, with proceeds set to go to the Brickyard family.

On the first weekend of June – the first Saturday of her Lewiston Farmers Market summer season – Symmonds held a basket raffle for the Brickyard team.

“I thought it was a perfect platform where people could come out. And I knew the market itself this year would probably be busy because of all the circumstances, so I thought, ‘What a perfect way to combine the two efforts,’ ” she said. “The outpouring from, one, volunteers, the people who reached out and said, ‘How can I help you?’ I appreciated that. To the businesses who have reached out, from far and wide, from Buffalo to Wilson – all over – wanting to donate to the raffle basket. And then the people who came out.” 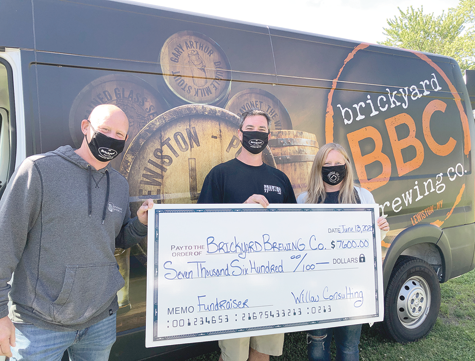 Eric Matthews and Ken Bryan receive a check for $7,600 from Jamie Symmonds. The funds raised at the Lewiston Farmers Market will go to the Brickyard employees.

“Twenty-six years we’ve been in town doing business, it’s by far the most overwhelming thing/event/anything that I’ve seen done in this village,” Bryan said of the fundraisers. “It’s just, it’s almost tear-jerking. The support that has come out for us, you know people that have texted, called, whatever. … I’ve had five days straight – I think at one time there was 400 texts I had to try to respond to. It’s overwhelming. Words can’t say anything.”

“Yeah, it’s great for us to be in this community,” Matthews said. “I’ve lived here my whole life. Ken’s lived in here and Youngstown his whole life. And to actually have the community rally behind it, you feel like you’re a native son of Lewiston. It’s unbelievable how people kind of just rallied. It’s crazy. And a lot of my neighbors actually gave me a little present and a really nice card, and they said that they feel like they’ve lost a place where they can hang out for a while. It’s almost like they’ve lost something and they have to get it back. So, I think that’s a main part of it, is everybody feels a little lost in the community, and everybody’s just rallying. It’s amazing.”

“That and the breweries – the other breweries in Buffalo have stepped up and let John (Meteer) brew,” Matthews said.

He noted, “The different places, they’ve just stepped up and said, ‘You guys can come here and carry your thing until you get up and running and get your system back together.’ And I mean everybody. It’s crazy. Just every single person – anybody from construction to this (market fundraiser), every facet of the community has stepped up, which is amazing. We can’t wait to give it back.”

Lewiston Council on the Arts Artistic Director Eva Nicklas was at the market last weekend. Prior to a check presentation, she told Bryan and Matthews, “You already have given it back, and that’s one of the reasons that everybody loves you so much. You know, how many years have you supported the artists’ breakfast at the Lewiston Art Festival – every Sunday for the last, I don’t know, 15 years; and giving a breakfast to 150 artists, I mean, that’s huge for an organization like mine. So, you deserve every bit of love that’s been pouring out.”

Bryan said, “We plan on staying here long. We’re gonna rebuild. We’re not going away. It’s gonna take time, but we plan on being in the village long-term and doing the same.” 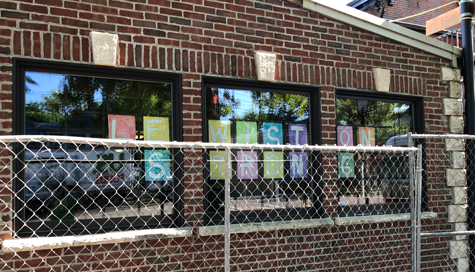 To that end, the owners have now turned their attention to rebuilding.

“We both said to each other, you know, building the brewery with our own hands and doing all that, and now it’s gone and we have to rebuild it. And we both looked at each other and said, ‘Can we physically do it again?’ We don’t know! I hope so,” Matthews said. “But we’re going to get a lot more help this time. But at the end of the day, it’s gonna be a long haul; but we’ll get it done – we got it done the first time. We’ll get it done again.”

He said, “Brickyard is being revitalized right now. We’re redoing the kitchen. It really just got a little bit of water damage on the floors and that from the water coming from BBC, so, because of that fire-block wall that we had, nothing happened. Very little smoke damage. It doesn’t smell any different than the smokehouse smelled before.”

“There’s a little roof repair, which we’re still waiting for insurance; unfortunately, they’re all on a no-fly program, so they’re still coming to look,” Bryan said.

“We’re hoping to get (the Brickyard) up and going before the end of summer,” Matthews noted. “And then the BBC probably, I don’t know, six to nine months, maybe, depending on how long it takes.”

“Pretty much the top of it burned. The bottom floor, if you walked in there and walked in the hostess station the next day and you didn’t look behind you, you wouldn’t even know anything happened – which is crazy. The pizza boxes are still there, all white,” Matthews said.

“The fire pretty much started almost at the top of the second floor, so it stayed up, heat rising and got trapped in the roof. The metal roof is what saved probably the rest of the village,” Bryan said. “The firefighters did an amazing job.”

The Village Board recently approved a plan for the BBC brewers to build out a portion of the back Barrel House in order to make beer.

“The village has just given us an OK, thank you … to do a small little expansion, so we can put more equipment out there to get our brewing up and running as soon as possible,” Bryan said. “So, hopefully in the next week, we’ll start to possibly break ground and get that rolling. We’ll have to bring all new equipment in. All that equipment is in BBC, so we’ll temporarily relocate that outside. And then keep the taps flowing.”

BBC debuted in late spring of 2017, a majestic two-story structure, banquet area and brewery that instantly became the go-to place for events in Lewiston. It was designed by Bryan, Matthews, GM Steve Matthews, and architect Jim Fittante.

The Brickyard celebrated its 15th birthday in February. 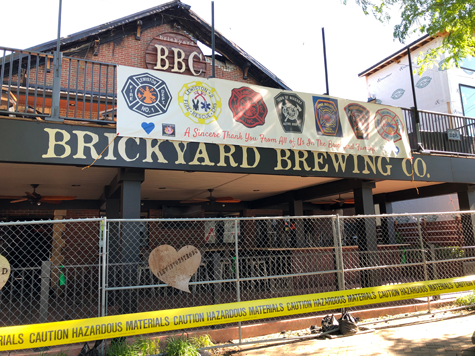 Signs on the BBC and Brickyard thank local first responders and the Lewiston community. 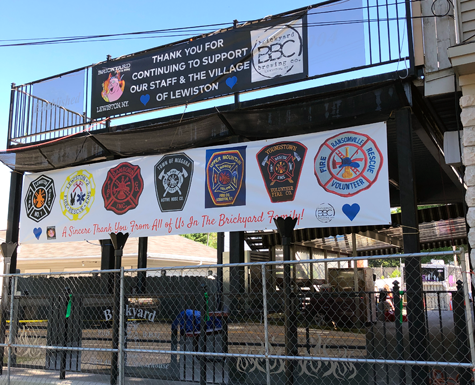